Lili Reinhart was seriously frustrated with those who went to extreme lengths for Monday night’s Met Gala.

The “Riverdale” actor shared a series of rants on social media where she called out the “stupid, harmful celebrities” who emphasized the dietary measures they took just to “fit in a f***ing dress.”

“So wrong. So f***ed on 100s of levels,” Reinhart wrote in her Instagram story. “To openly admit to starving yourself for the sake of the Met Gala. When you know very well that millions of young men and women are looking up to you and listening to your every word. The ignorance is other-worldly and disgusting.”

She didn’t mention any name, in particular, however, her comments have been interpreted as a jab at Kim Kardashian, who attended the event in the vintage gown worn by Marilyn Monroe to President John F. Kennedy’s birthday celebration in 1962. 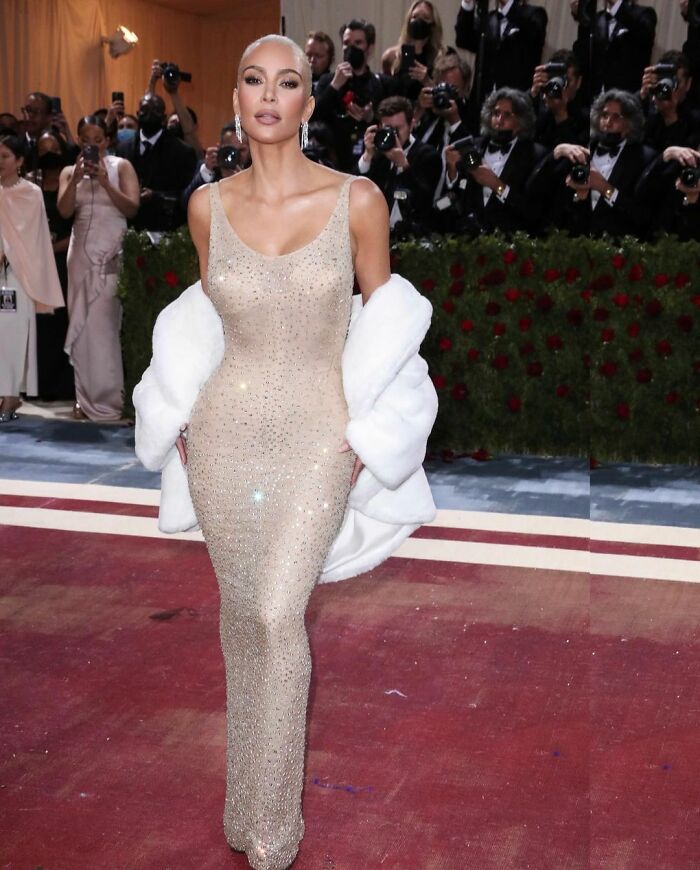 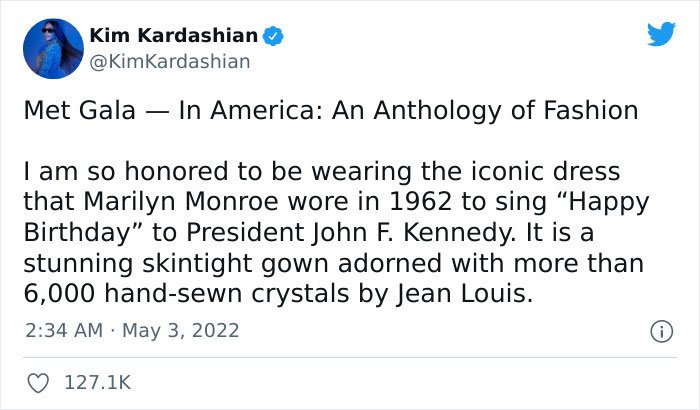 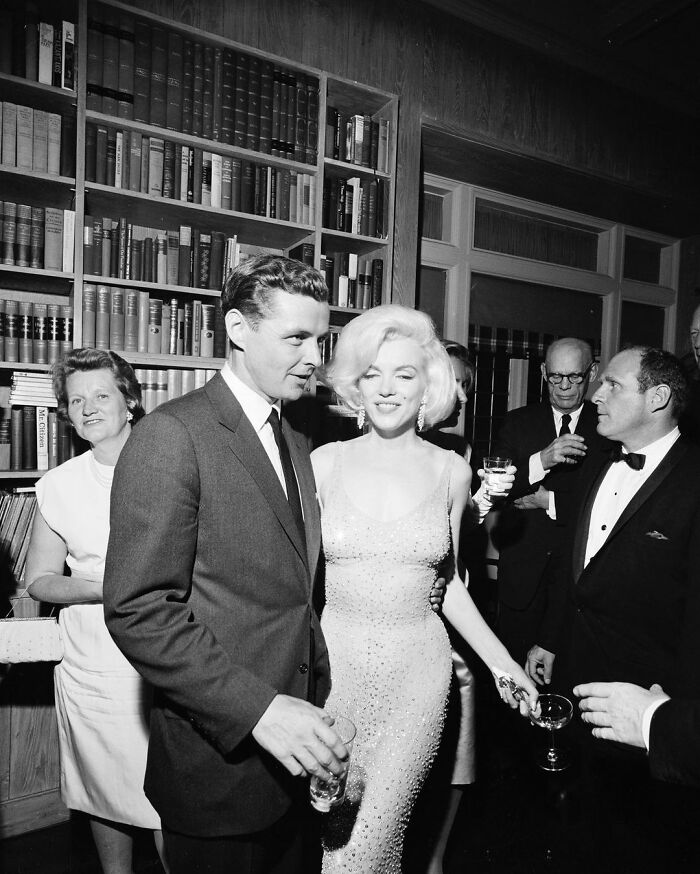 The dress is now valued at over $10 million 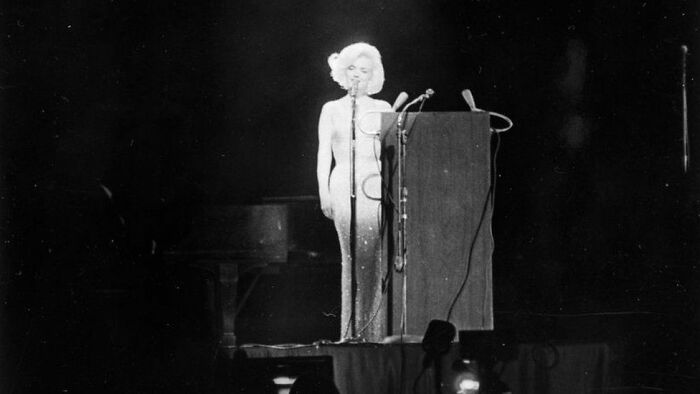 Kardashian told Vogue she lost 16 pounds in order to fit into the gown, which was on loan from the Ripley’s Believe It or Not! museum and cannot be altered.

“I tried it on and it didn’t fit me. I said, ‘Give me three weeks,’” she explained. “I was determined to fit [into] it. I haven’t had carbs or sugar in about three weeks.”

In the days since the Met Gala, Kardashian’s remarks have drawn a flurry of criticism, with many calling her dieting “extremely dangerous.”

“You should not be celebrated for losing 16 pounds in 3 weeks,” Yahoo Canada lifestyle editor Elizabeth Di Filippo tweeted. “You should not share details on how you unhealthfully lost weight with a major publication.”

Fashion journalist Amy Odell added: “If that’s not the regressive messaging this industry has tried desperately to distance from, what is?” 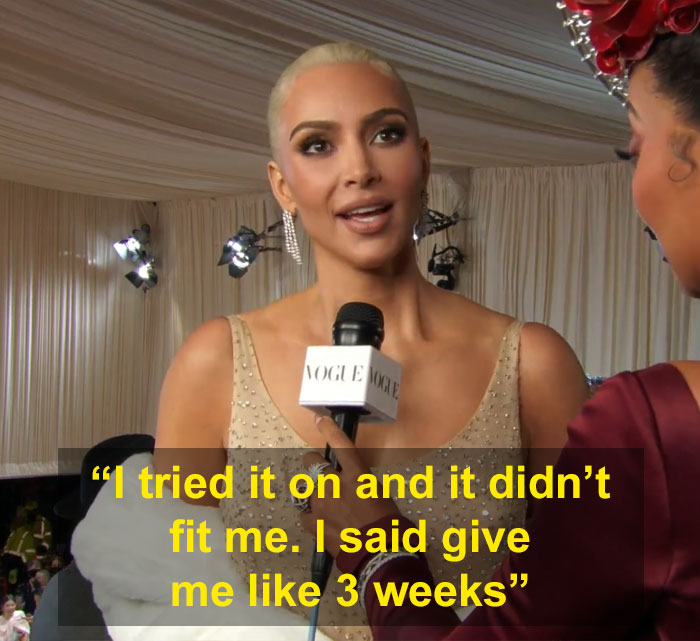 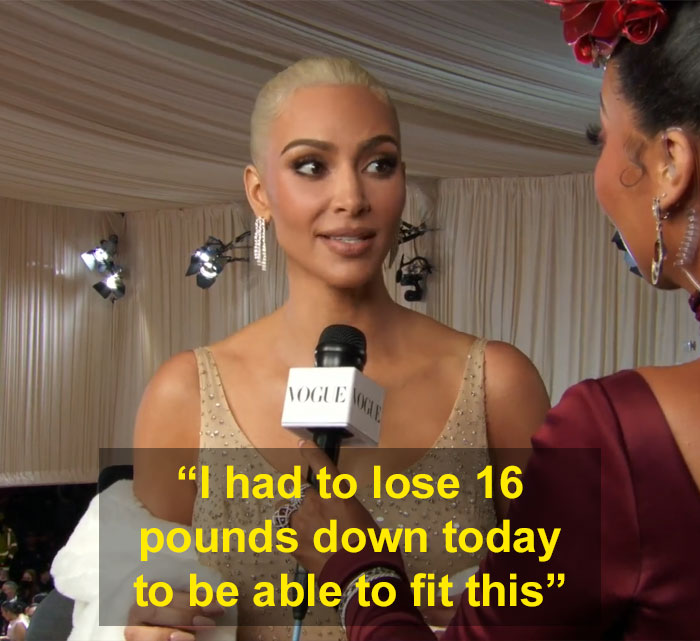 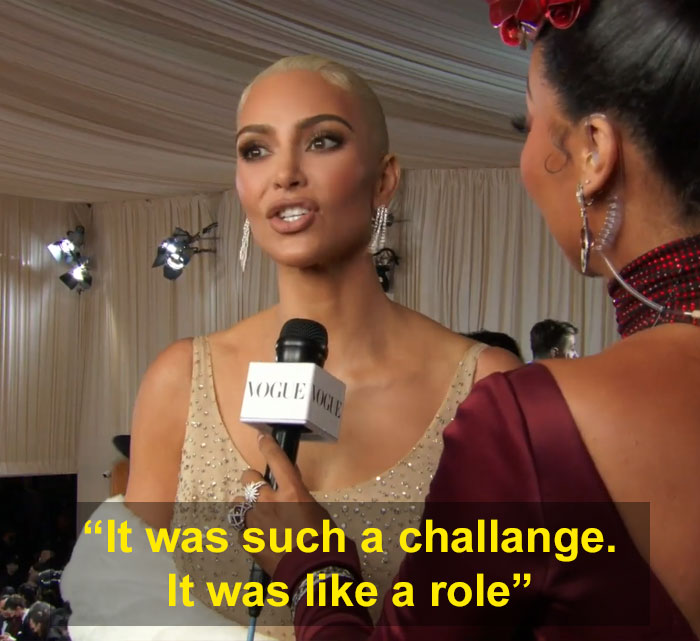 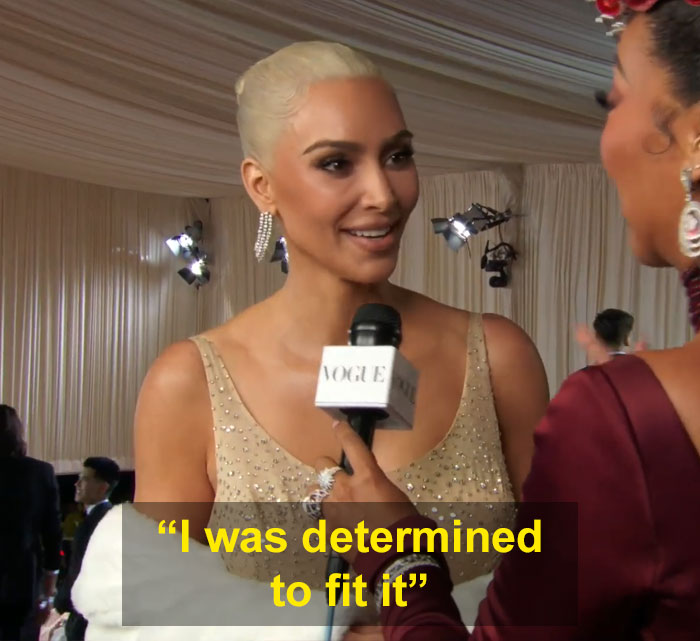 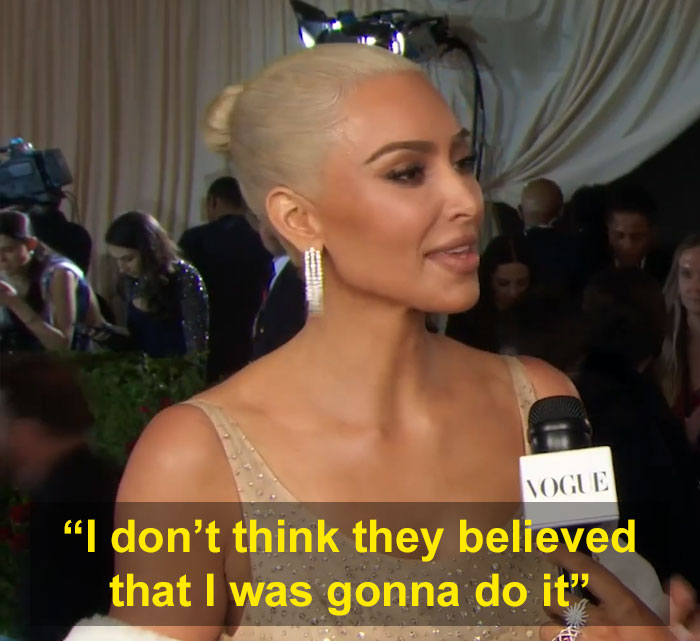 Kim has received loads of attention for it 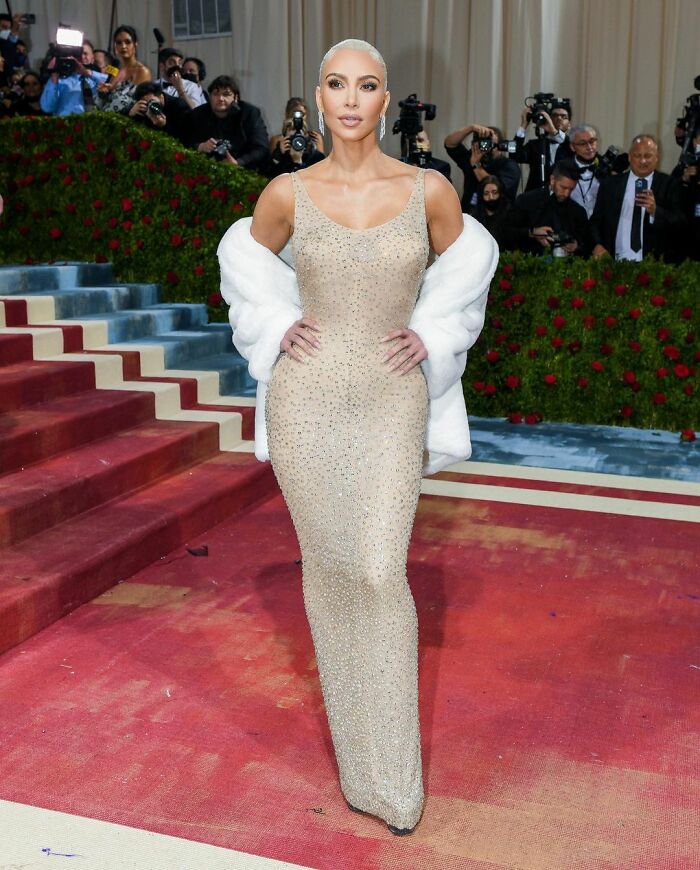 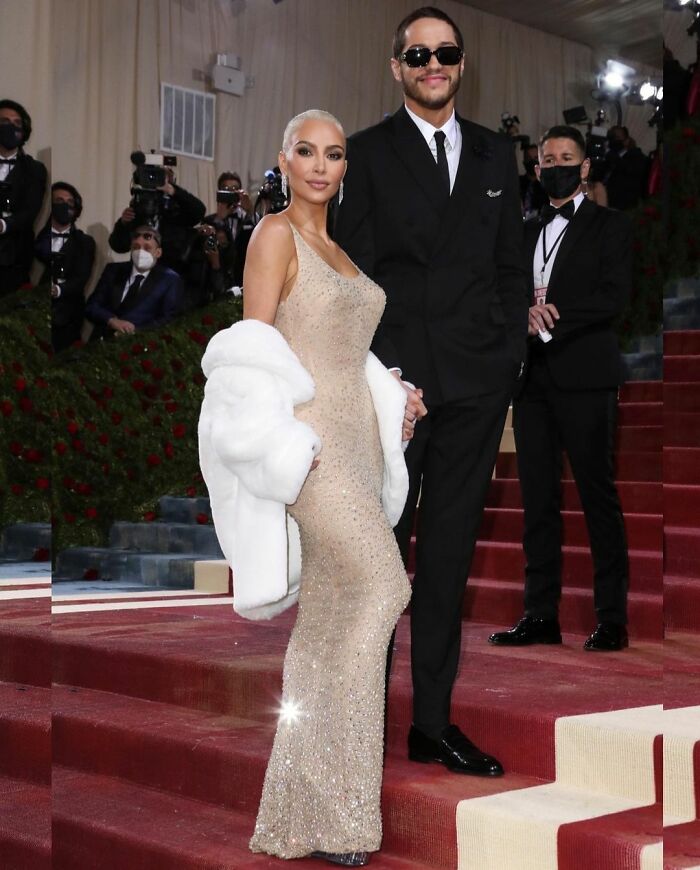 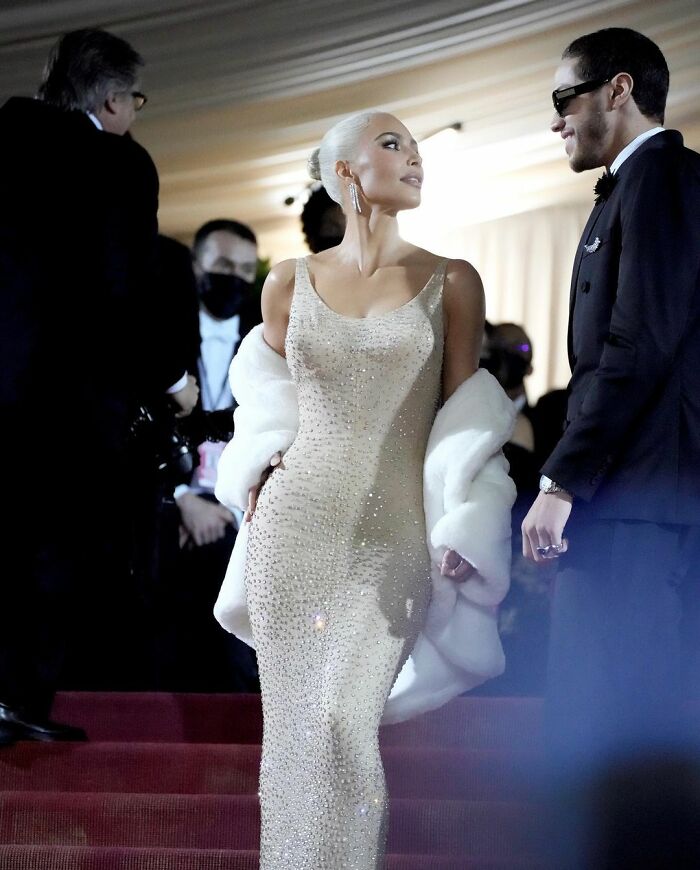 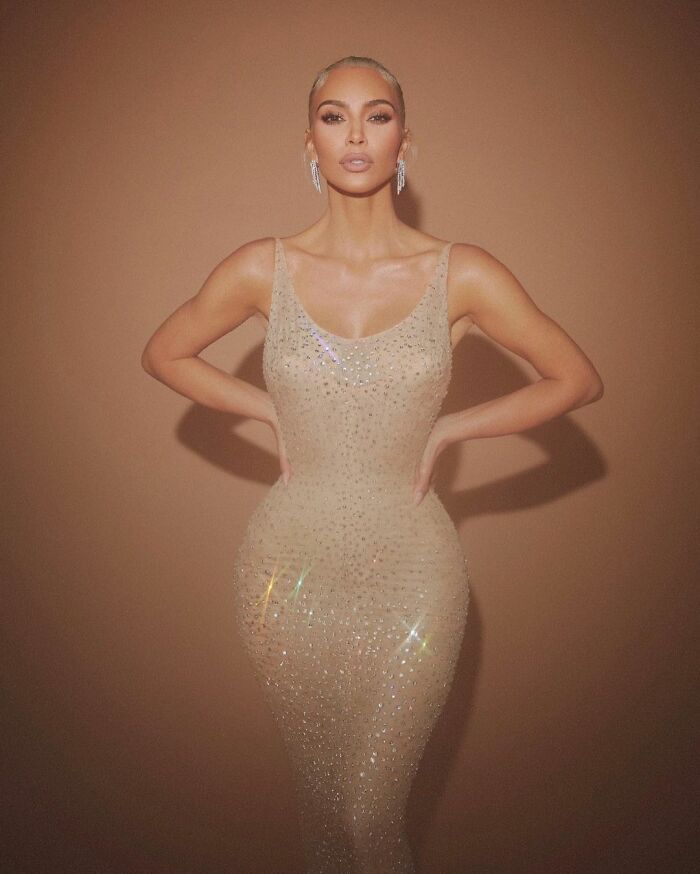 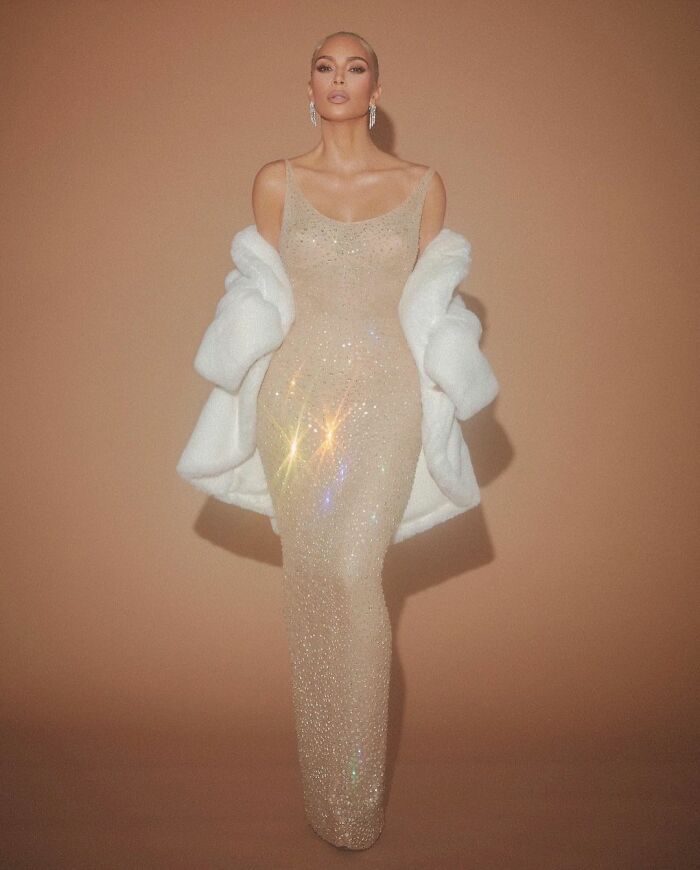 This topic is especially important to Lili Reinhart who has been outspoken about her own struggles with body image.

“Reminder to myself, and to all — you don’t need a flat or perfectly toned stomach to wear a crop top,” the actor tweeted in March. “These ‘summer body’ trends are toxic. Your body is ready for summer no matter what it looks like.”

But not all of it was supportive 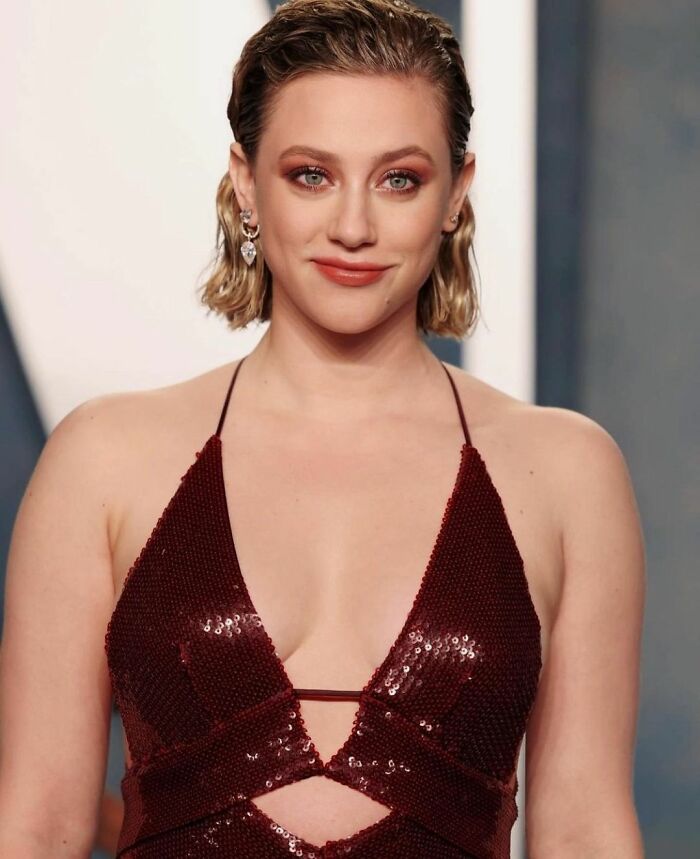 Actress Lili Reinhart seemed to be really appalled by it 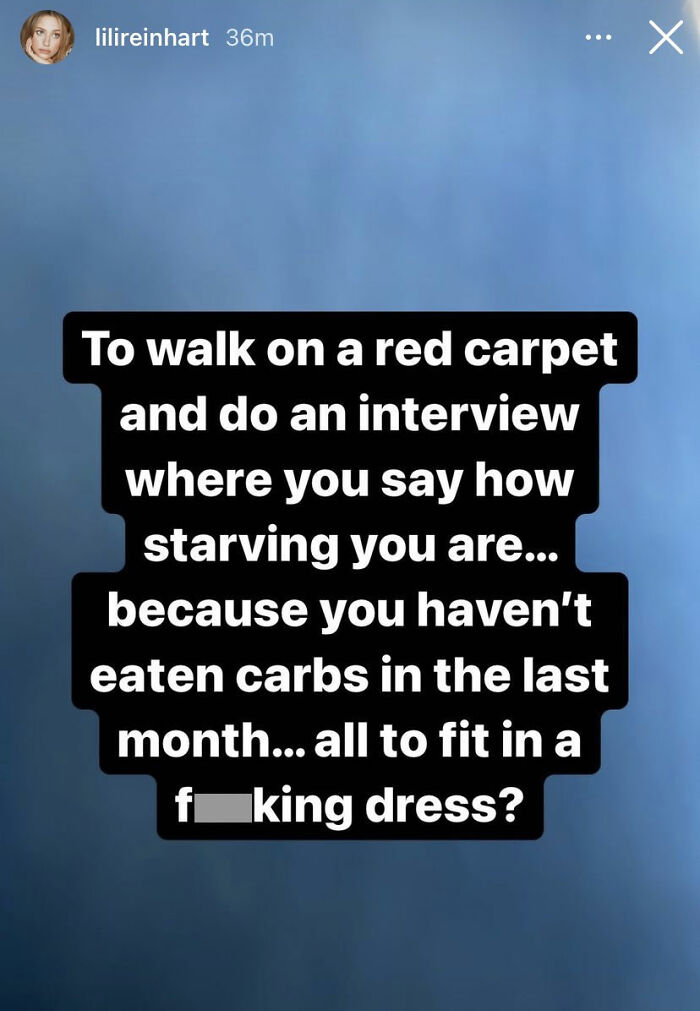 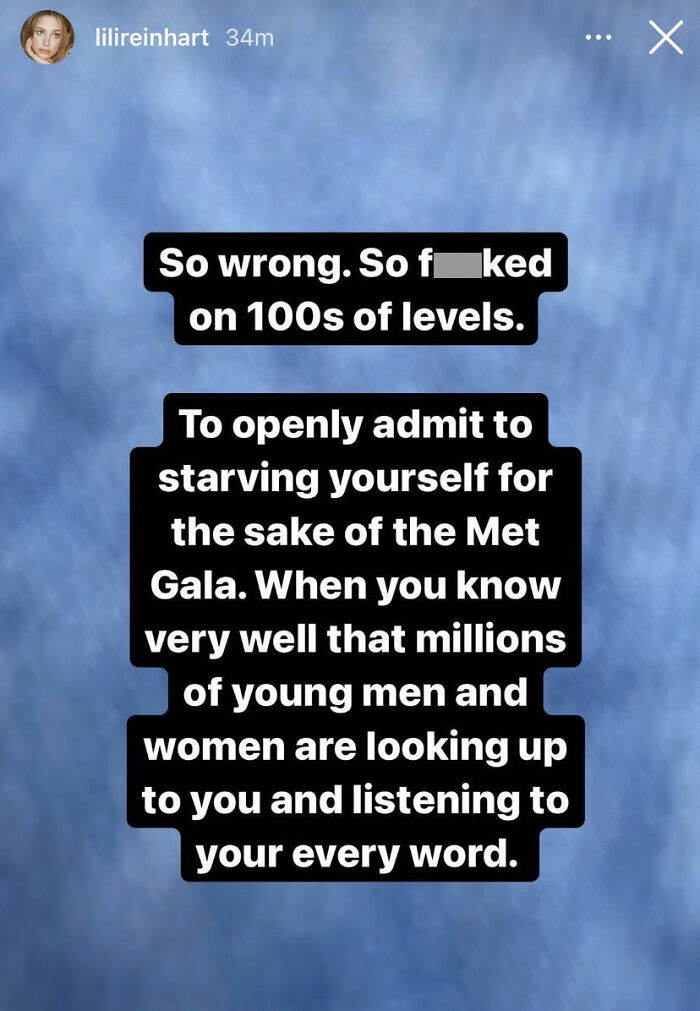 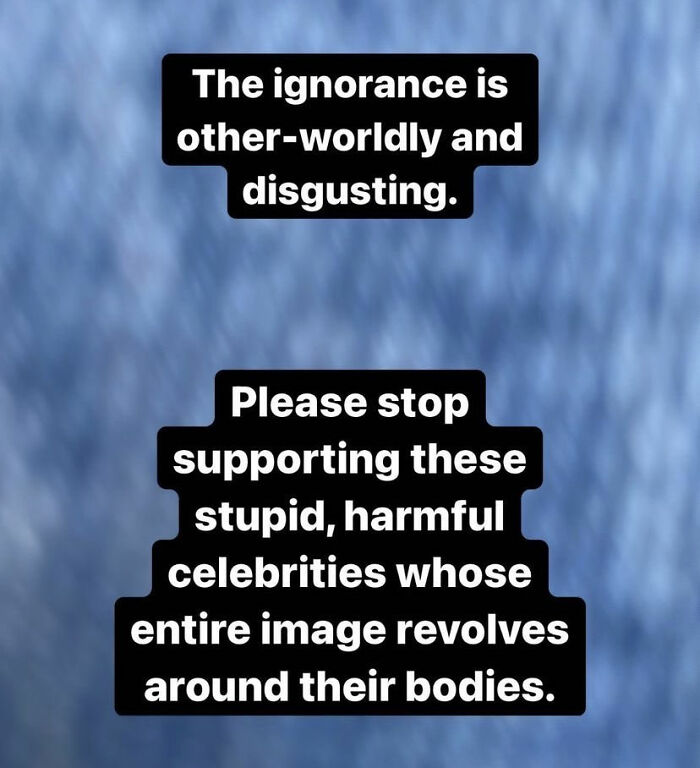 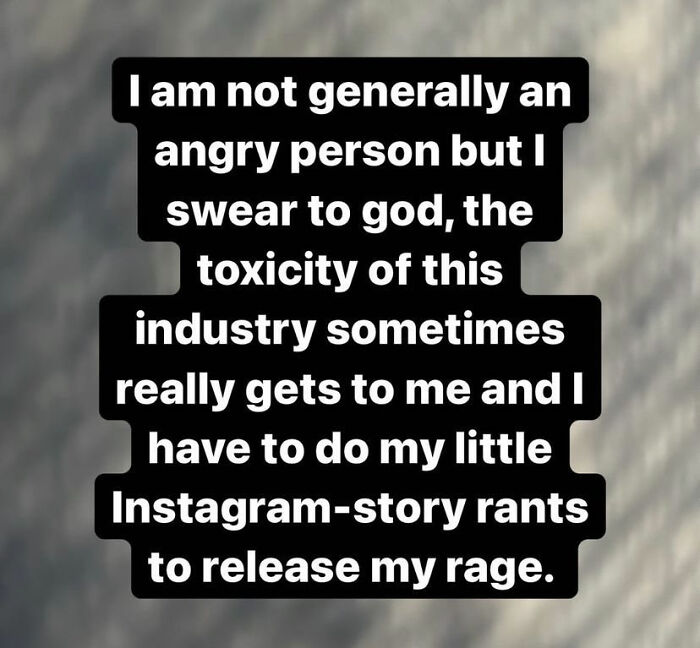 After Reinhart’s remarks made headlines, she clarified that she’d chosen to speak up “because I don’t see enough people with large platforms calling out toxic behavior in our industry.”

“Some people will never understand where I’m coming from and that’s okay,” she said.

She also highlighted the importance of speaking up 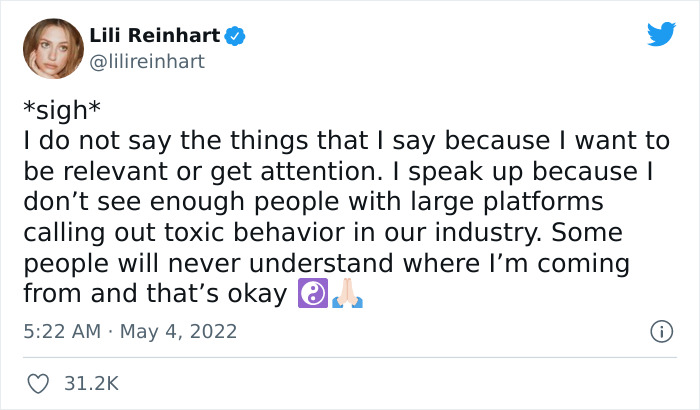 Reinhart wasn’t the only one who had a problem with Kim’s crash diet. Nichola Ludlam-Raine of the British Dietetic Association thinks portraying such a regime was “irresponsible.”

Furthermore, Ludlam-Raine said it would be impossible to lose 16 pounds of fat in three weeks.

Much of it would have been water and glycogen, a form of stored carbohydrates, lost when someone stopped eating sugar and carbohydrates but regained when they resumed.

Kardashian’s comments were potentially “dangerous, especially to vulnerable people” and sent a message that was “completely wrong”, Ludlam-Raine explained.

“It’s really irresponsible because a lot of people will be reading and watching her, especially people with eating disorders, or young women, thinking that it is possible, or it is needed, to lose such a dramatic amount of weight in a relatively short amount of time, when most health experts recommend losing around 1-2lb a week,” Ludlam-Raine said.

“It’s not a sustainable way of living. When you cut out sugars, research shows that we end up psychologically craving it more – and what that can lead to is a binge-restrict cycle.” 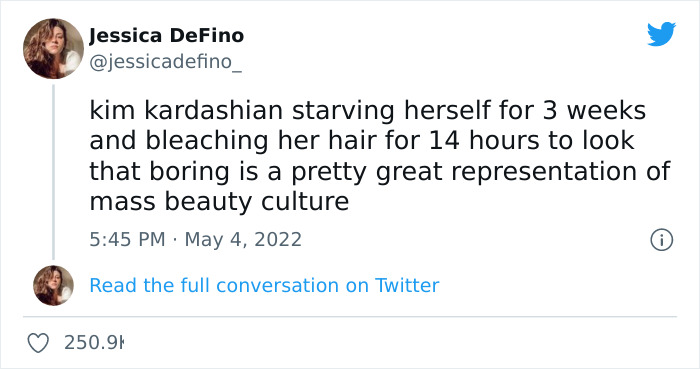 “She said afterward she was going to have a doughnut or something like that. We want to pull people away from this binge-restrict cycle, and actually show people that they can have the food that you love in moderation whilst achieving whatever health or weight goals you have in mind,” Ludlam-Raine continued.

Ultimately, it’s not about sending your body on a rollercoaster ride but rather finding the right balance. Healthy eating for your body and your soul. “It sounds like she’s done neither over those three weeks prior to the Met Gala,” Ludlam-Raine said. 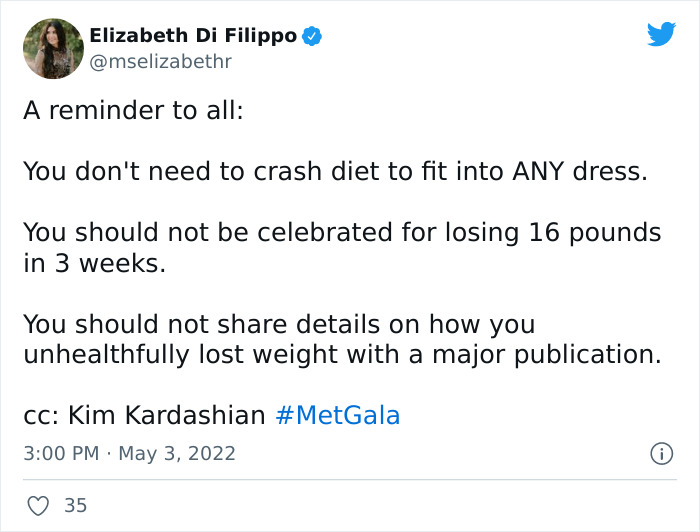 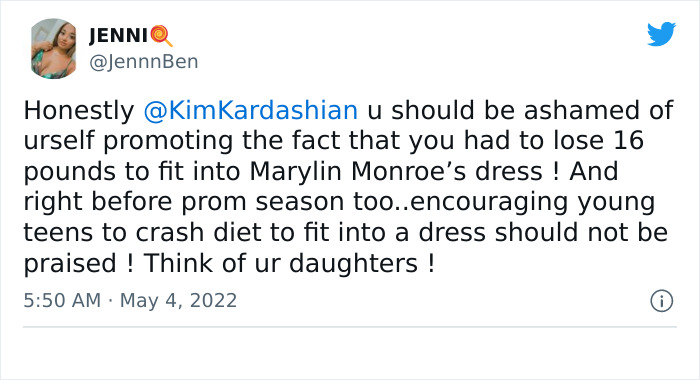 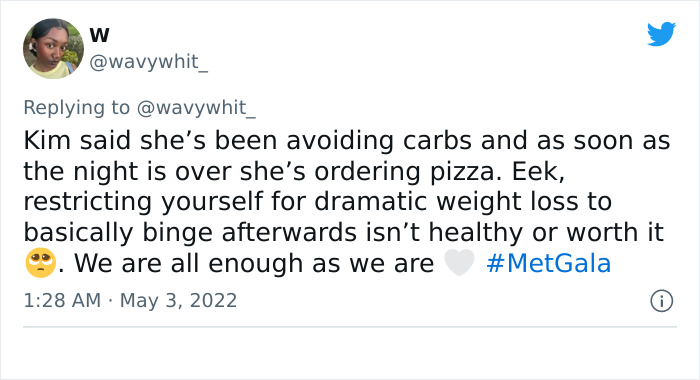 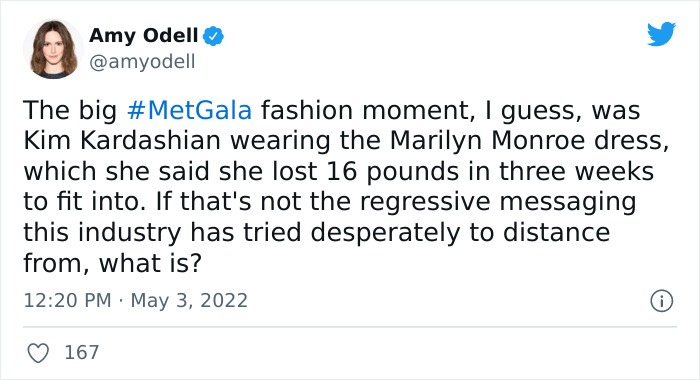 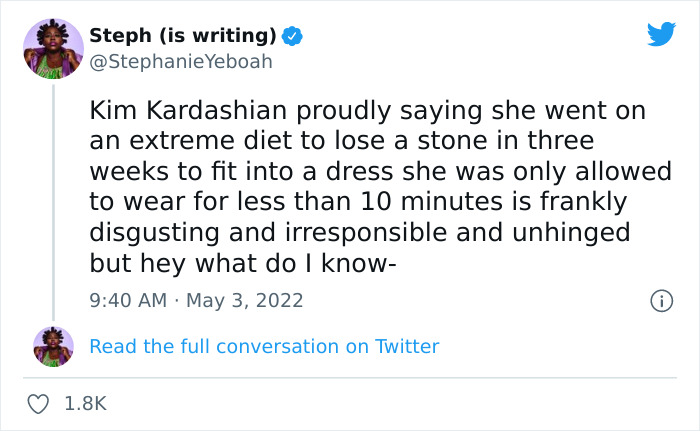 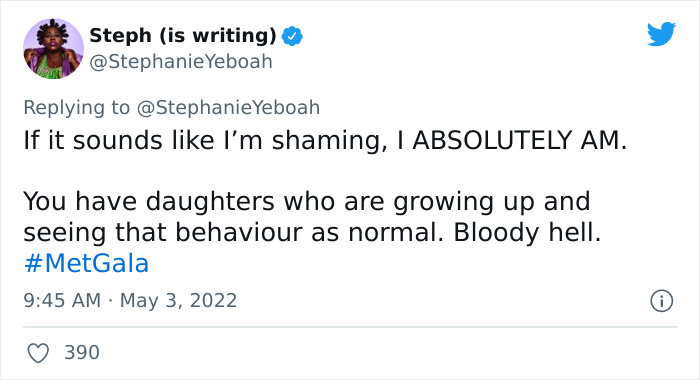 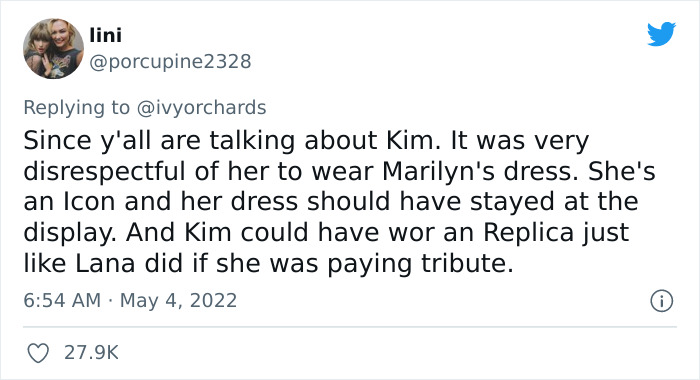 There were, however, folks who thought the internet is blowing things out of proportion 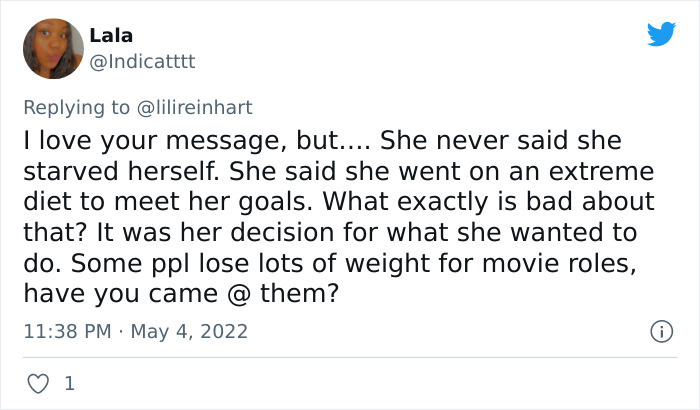 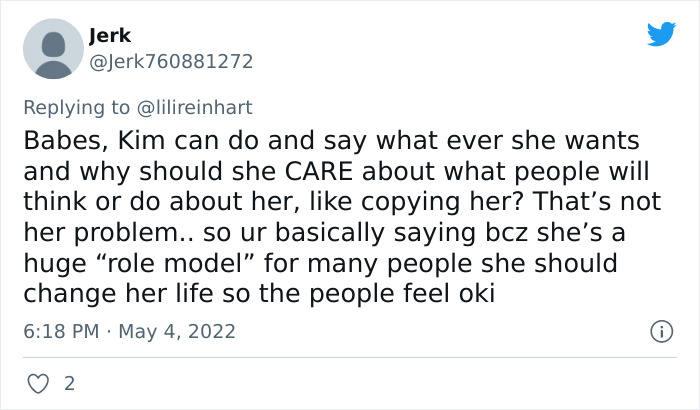 The post People And Celebs Call Out Unhealthy Beauty Stereotypes Being Promoted At The Met Gala After Kim K Shares How She Crash-Dieted To Fit Into Marilyn Monroe’s Dress first appeared on Bored Panda.