I have no idea what I just said, but you have to admit, old English is pretty cool.

And there’s more than just linguists or historians who’ll agree here. A Twitter thread has recently started going viral for its awesome list of medieval words that, no matter when you live, you just gotta use in your speech.

You gotta admit, medieval speech is awesome. If anything, for its amusing language, but also for how oddly specific or just downright funny it can be 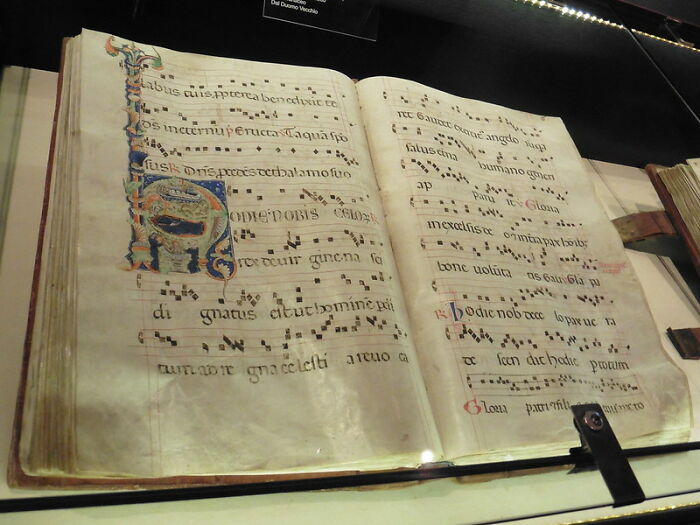 So, there’s this Twitter page called Weird Medieval Guys (@WeirdMedieval), which identifies itself as a “purveyor of quality weird dudes from approximately the 5th to the 15th century, a.d.”

In other words, it’s a page focused on memes, you can say, that revolve around bizarre medieval art, mostly showcasing some form of being. Very weird being. It’s run by a self-proclaimed werewolf named Olivia M. Swarthout.

Anywho, one of the page’s recent tweets featured a sizable list of medieval words that were described as being awesome, but I assure you it’s more than that. If anything, it’s comedy at its finest. 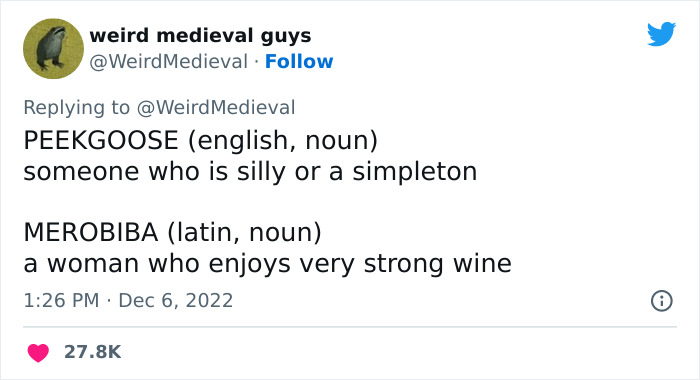 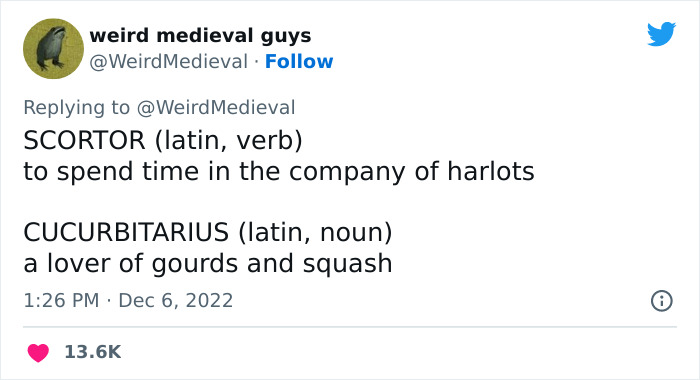 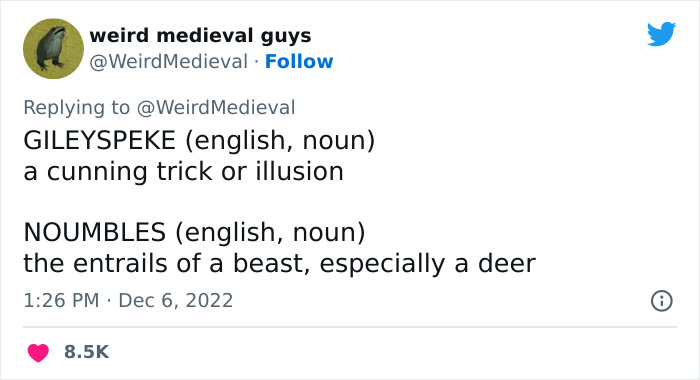 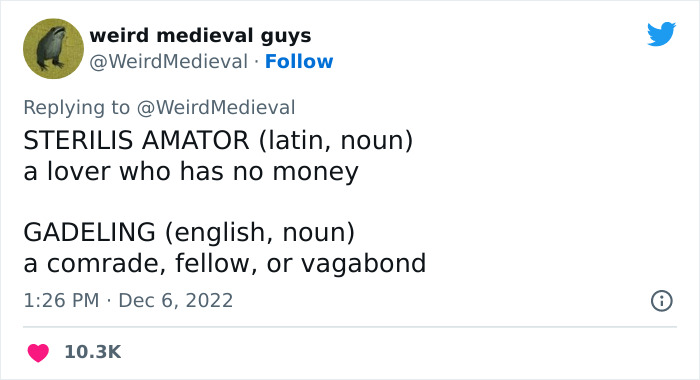 The thread is populated with medieval English words of English and Latin origins. If the word itself doesn’t elicit at least a smile, the meaning sure will. For instance, the word merobiba doesn’t say much, but its literal meaning is “a woman who enjoys very strong wine.” The nearly unutilizable specificity of the linguistic construct can’t be understated here. 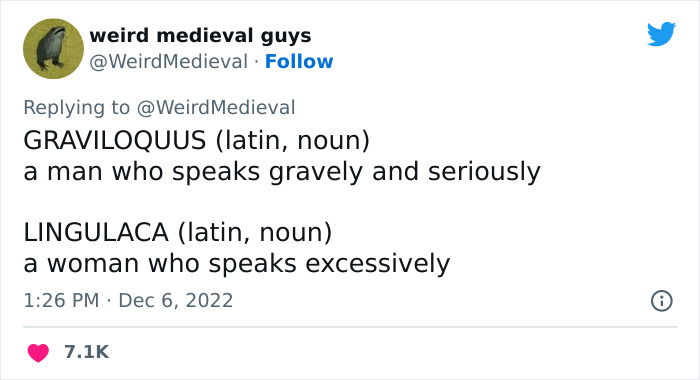 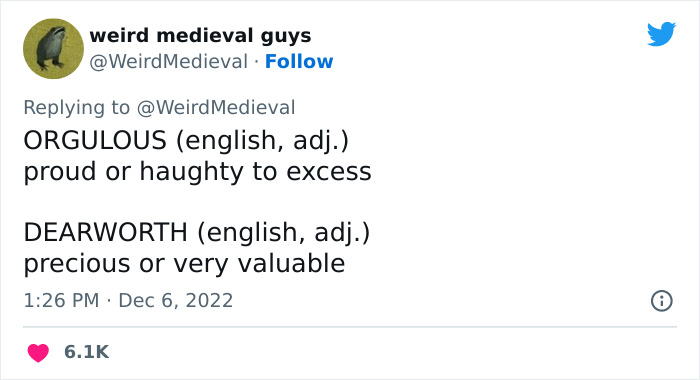 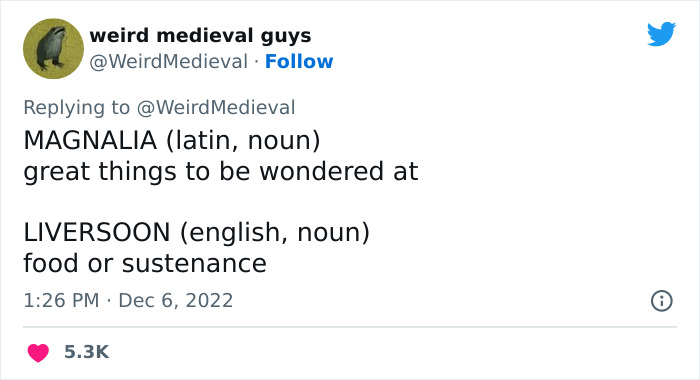 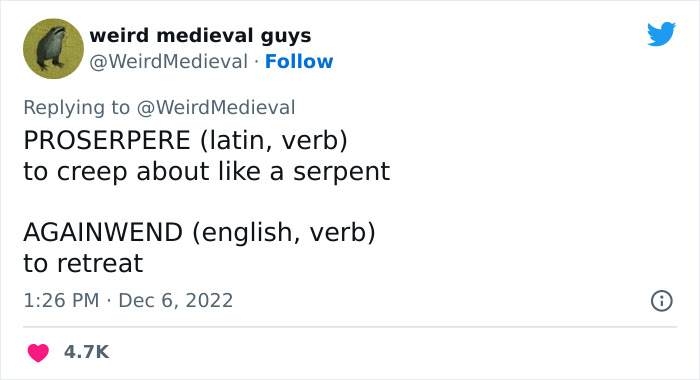 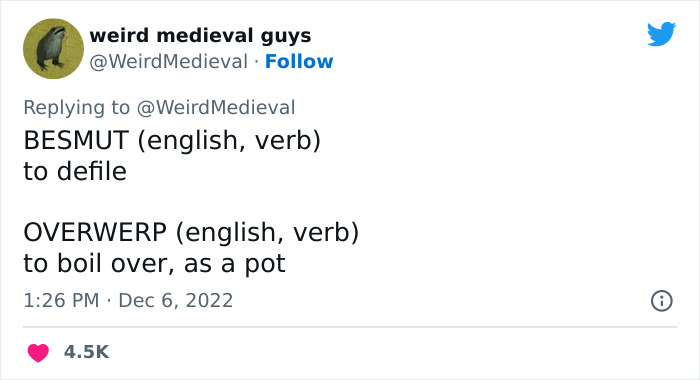 And you better believe that people used merobiba. Google Ngram alone registered peak usage back in 1880. Sure, it’s not medieval times, but no book ever mentioned the word earlier than that, and if a dictionary contains the word, there has to be some predominant usage of the word to justify it. And it gets better. 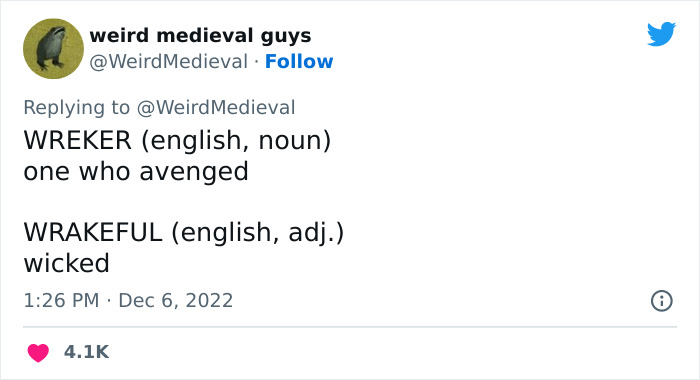 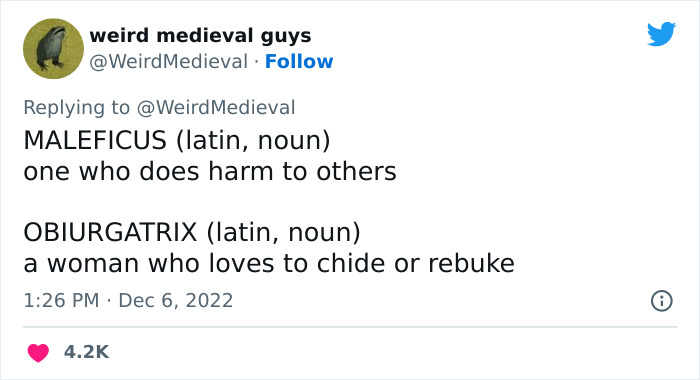 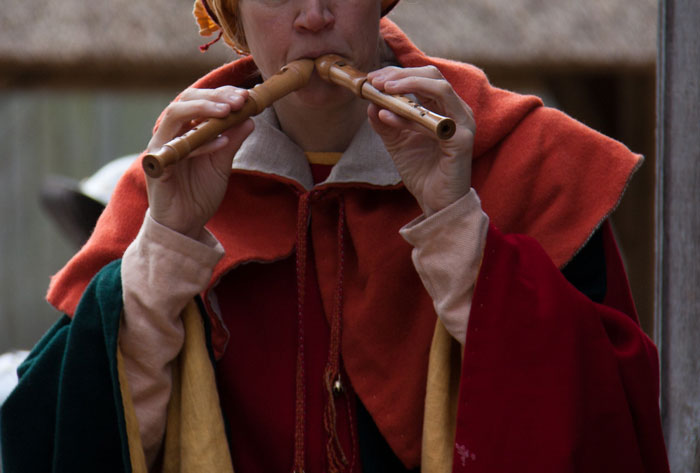 There are a total of 23 words in this thread, and they ranges from practical (entrails of deer, noumbles, and a lover who has no money, sterilis amator) to derogatory (a woman who speaks too much, lingulaca) to downright funny (to defile, besmut) to here’s some knowledge you’ll probably only ever use once (a lover of gourds and squash, cucurbitarius). Oh, there was also methful: peaceful, quiet and modest. Breaking Bad begs to differ.

And it was all with references—very old, yet very legit references 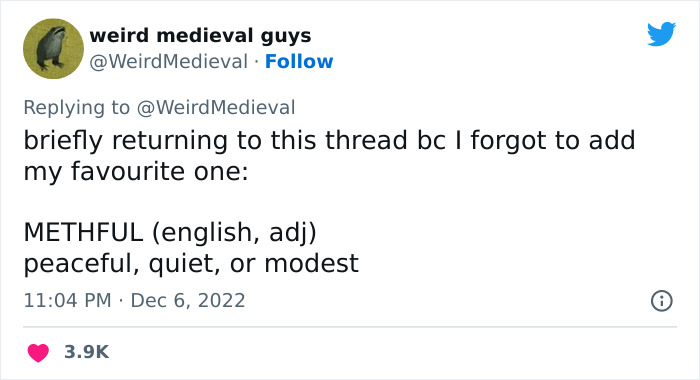 And before you go calling shenanigans on the thread, the page did provide references. The words of Latin origins were selected from the dictionary of syr Thomas Eliot knyght, dated 1490?-1546, while the English words came from Herbert Colridge’s 1862 Dictionary of 13th Century Words.

The thread resonated with a lot of folks online. Over 202,000 people, to be precise, as the likes counter shows. And over 30,000 liked it so much, they retweeted it.

And folks had a lot to say in that regard, especially since the thread got over 202,000 likes

This spawned a number of other suggestions for the list in the comments, like fifflefaffle, which means to talk nonsense, and overmorrow, the day after tomorrow.

Others took a jab at some of these words, saying that “Pinterest mommies” will be quick to use them as names for their kids. Which, you gotta admit, peekgoose would be a good name. Probably. 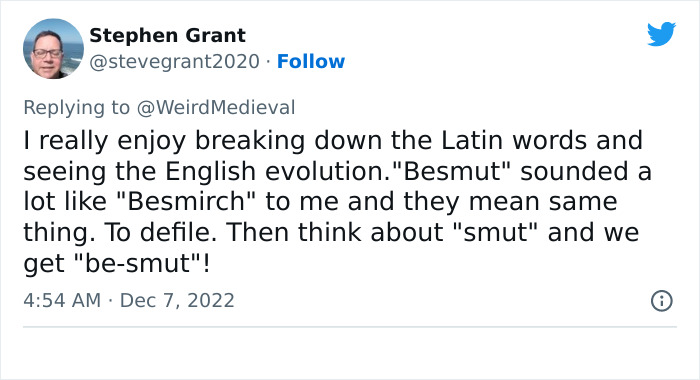 Yet others also figured that some of these might sound a bit inappropriate in certain environments, prompting a quick visit to HR (and maybe the local police station) to explain what you meant by methful.

You can take a gander at this thread of tweets in context here, but be sure to leave some of your suggestions, or to react to anything mentioned in this article in the comment section below!

The post People Are Amused By These 23 Very Medieval Words That Either Sound Funny, Or They Mean Oddly Specific Things first appeared on Bored Panda.