No matter how much we love our family members and enjoy big and important celebrations such as Christmas or Easter, it has become common knowledge that very often, spending a day or two with your whole family means that there will be some bickering or uncomfortable topics discussed. From older family members who ask you the same questions every year about when you’re going to get married or trying to understand what kind of work you do and then still end up saying that you do “something with computers” to having to keep an eye on relatives’ little but very loud kids who just love making a mess everywhere at all times. With this in mind, Twitter user Mariè or @@p8stie decided to create a hilarious thread that encourages and teaches others “how to ruin your family Thanksgiving”. The post soon became viral with more than 52k likes encouraging other Twitter users to share their opinions as well as their tips and tricks on the matter.

Many people enjoy big family celebrations, knowing that they will get to spend time with their loved ones. But is it always the case? 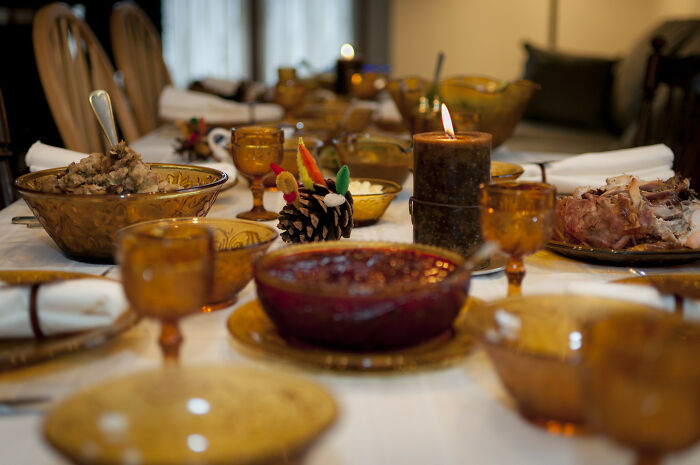 Twitter user Mariè started her thread by sharing that for a lot of families, Thanksgiving means a “time of discomfort and strife”, so knowing that there will be someone who will probably ruin the evening for you, she suggests that if you do it first, you can control the whole thing and this way escape weird and uncomfortable questions and unnecessary grilling. The important thing that the woman stressed was that under no circumstances can the whole thing be traced back to its creator. For this reason, the first thing that the person should do, according to the Twitter user, is to find a scapegoat. What is a scapegoat? Someone who would be easily provoked and poked by family members for some things that they don’t approve of them doing. The woman shared that while you’re “preparing” the scapegoat, don’t forget to mess with other family members from time to time.

Knowing that many people don’t actually enjoy such gatherings, she went straight to the point 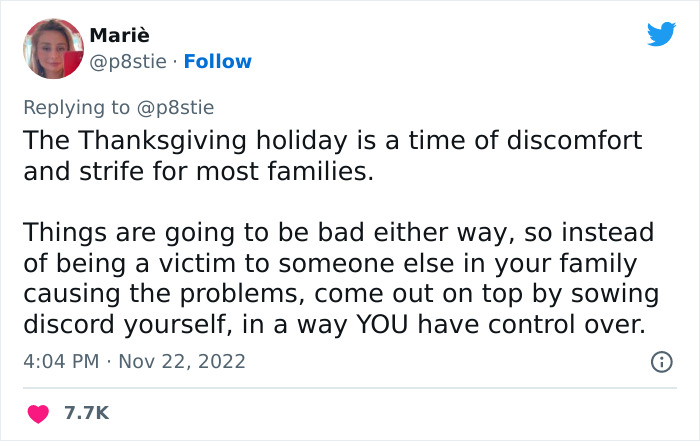 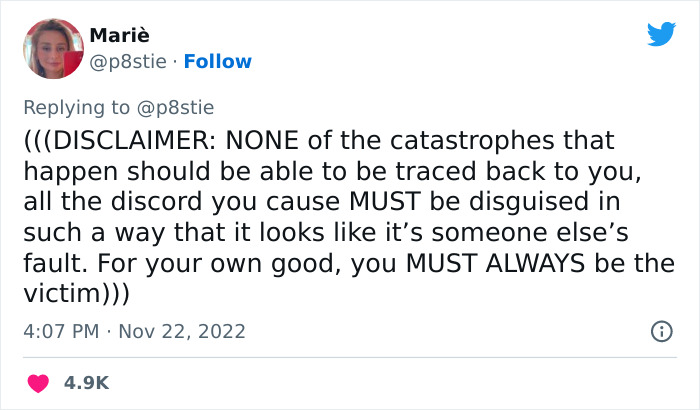 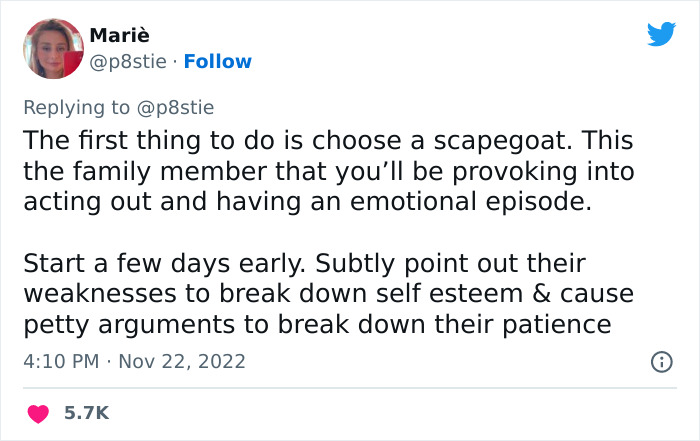 The Twitter user shared some elaborate but recognizable things one can do in order to bring mess and chaos into the household. Once the family is irritated, it’s time to use the scapegoat who has become triggered by the things they think others say about them, so they finally break down, creating even more chaos, making everyone think that they’re the one to blame. The woman shared that this is the perfect time for you to leave and enjoy your evening by going to a party or enjoying “the Black Friday sales”. 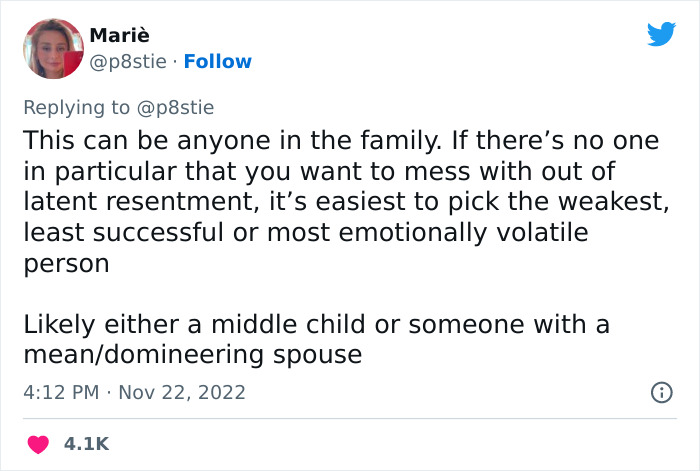 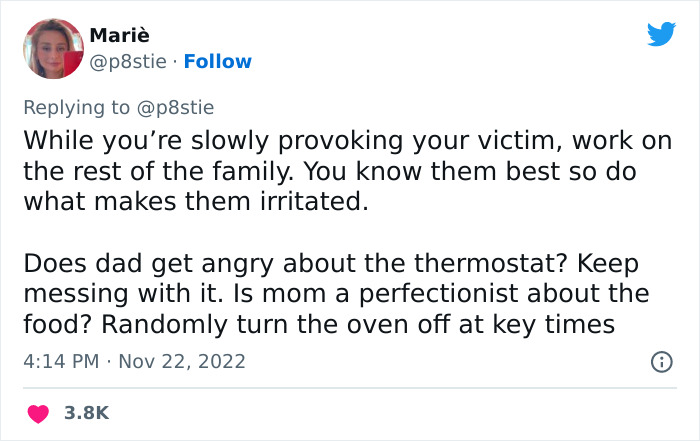 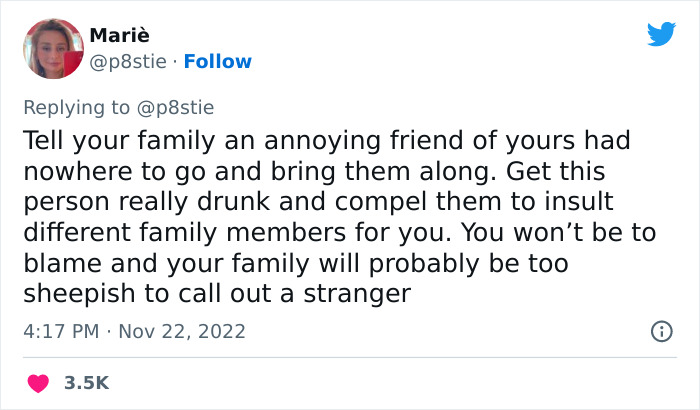 While this thread might be like a textbook on how to create a disaster at home, it encouraged other users online to share things they do to keep their family members on their toes and very likely cause an argument. It included dying your hair blue, making gluten-free dinner, or talking about different political views. Which one of these do you find most hilarious or relatable? Or you could add a thing or two from your own experience? Don’t forget to leave your thoughts in the comments down below! 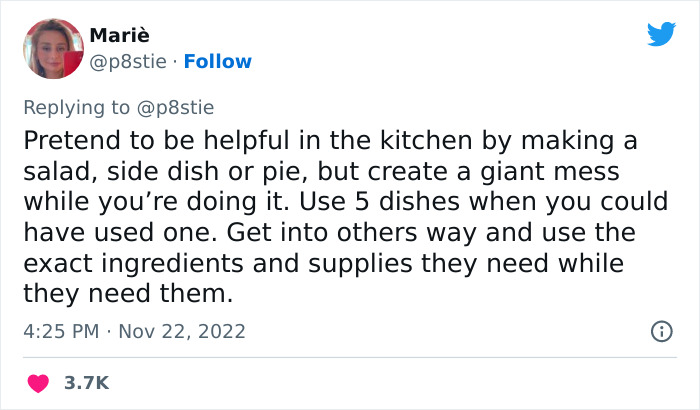 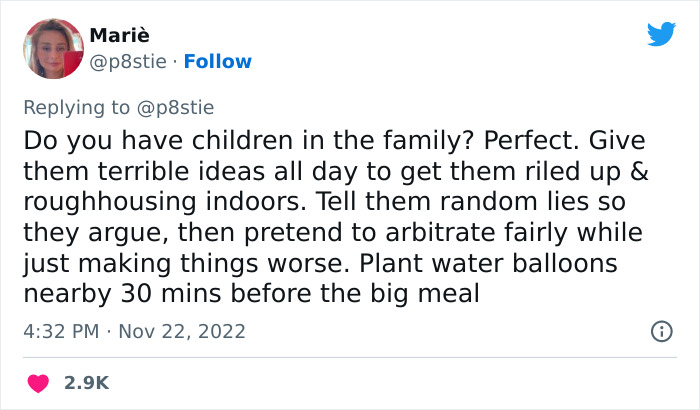 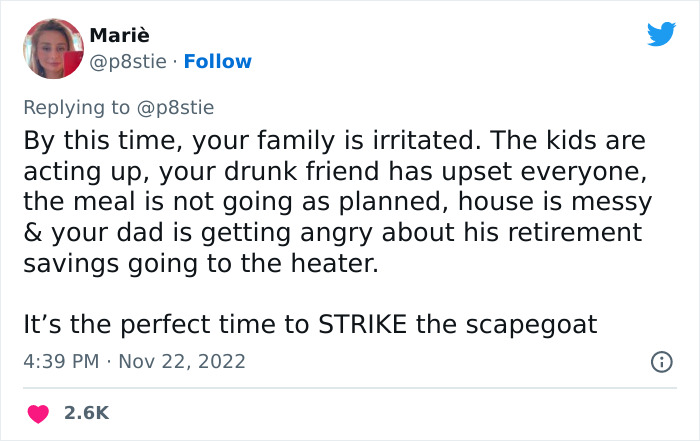 Those who aren’t from the US or Canada might not be familiar with the tradition of Thanksgiving, despite hearing about it every year. So what is Thanksgiving and how it’s celebrated? This festivity is celebrated every year, on the last Thursday of November. It’s known as a day to give thanks for being blessed and receiving various benefits and favors. According to Parade, Thanksgiving is a way to honor “the colonial Pilgrims’ harvest meal that they shared with Wampanoag Indians in 1621”. For quite some time Thanksgiving didn’t have its “day”, but thanks to American writer and activist Sarah Josepha Hale, who gave the idea to create a fixed date for this celebration, it’s now celebrated on the 4th Thursday of November. 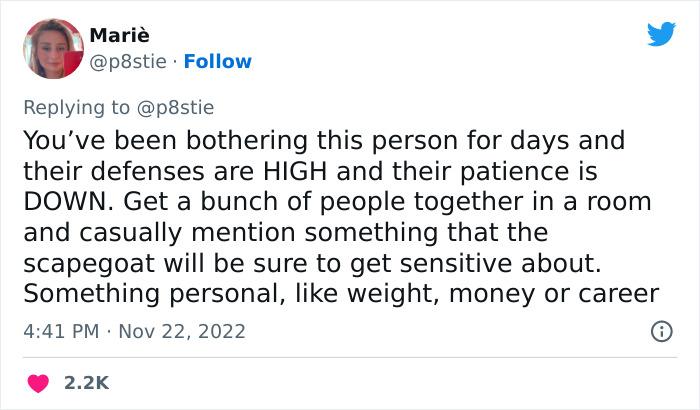 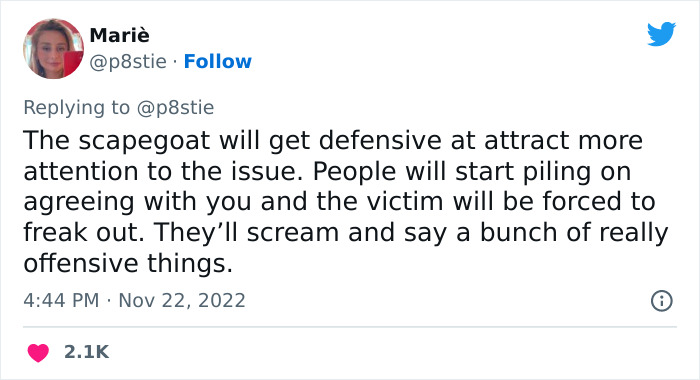 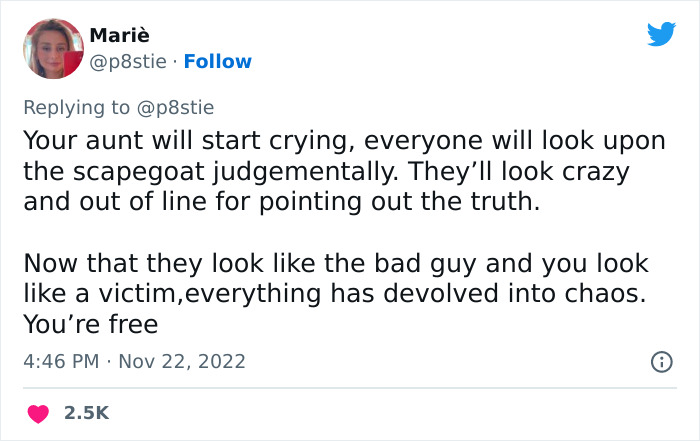 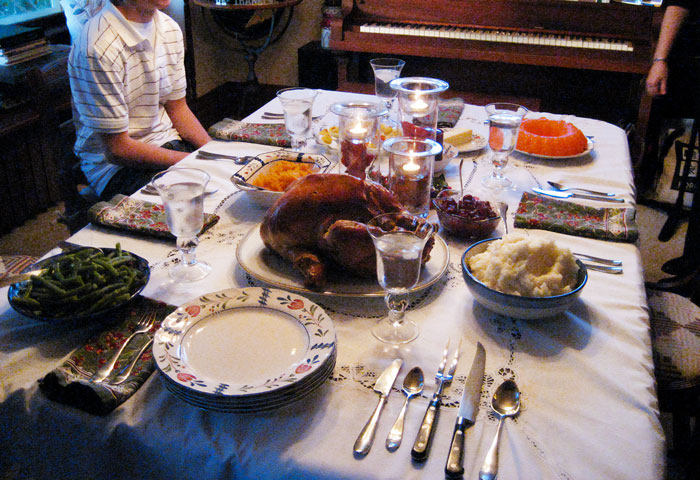 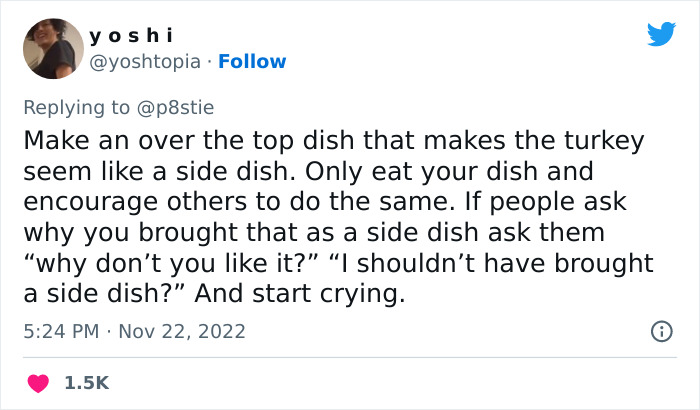 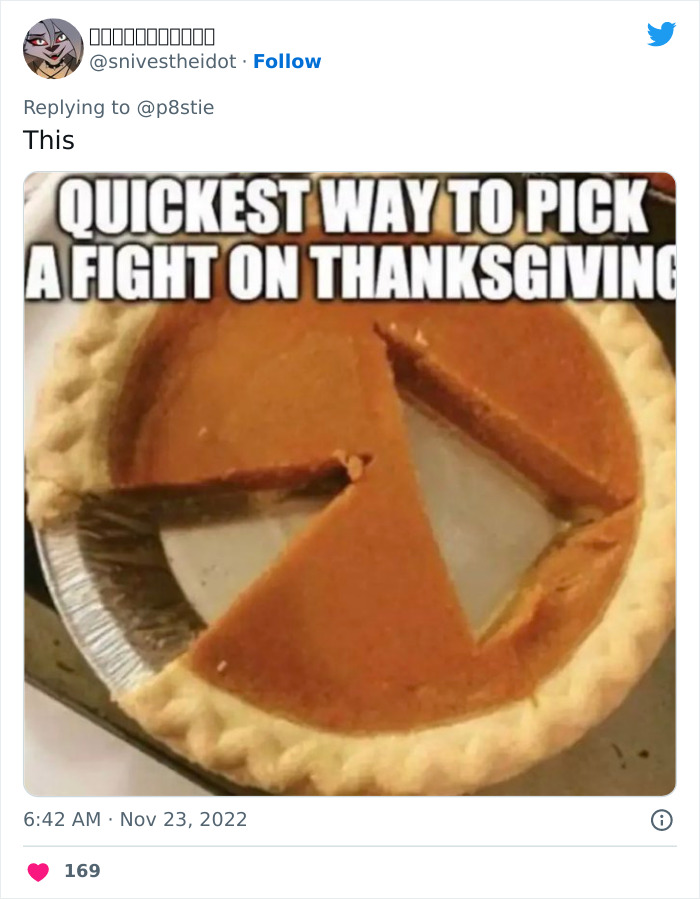 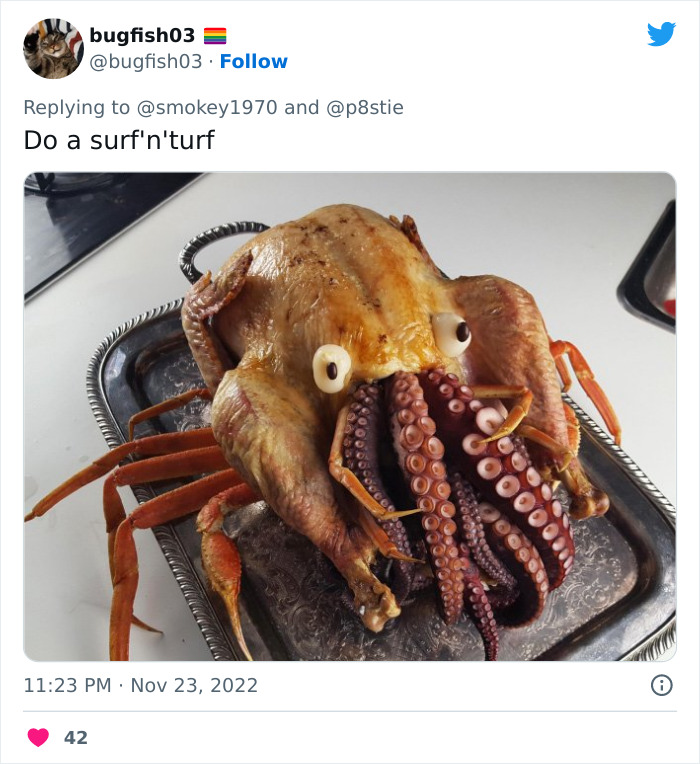 The post People Are Cracking Up At These 7 Satirical Ideas On How To Spoil Your Family’s Thanksgiving Without It Being Traced Back To You first appeared on Bored Panda.