At the end of our days, we can only hope that we’ve left a lasting impression on the world. And some people truly know how to live, seizing the moment each and every day. Even though many of us find the topic of death to be somewhat uncomfortable, many of us can still recognize the beauty of a life well lived, as well as an obituary that’s well written.

The internet is in stitches after reading a hilarious and honest obituary penned by a gay son for his mother, Renay Mandel Corren. Twitter simply can’t get enough and think the son, Andy, deserves a medal for his comedic genius, wit, and ability to be so candid in difficult moments like this.

“Hers was a bawdy, rowdy life lived large, broke and loud. We thought Renay could not be killed. God knows, people tried. A lot. Renay has been toying with death for decades, but always beating it and running off in her silver Chevy Nova,” Andy writes. Scroll down to read his entire text, praising the vast and deep life his mom lived, full of bizarre experiences. It’s open to interpretation whether the son is being witty for the sake of humor or is expressing a bit of anger as well through the irreverent text. Personally, I like to think that it’s all coming from a place of love.

This isn’t the first hilarious obituary that Bored Panda has crossed paths with. A couple of years ago, we featured a story about a notorious 82-year-old prankster whose family said goodbye to him by writing up a witty obituary.

Having literally just released her first-ever pop music video, British comedy writer and author of ‘How to Live to 100,’ Ariane Sherine, told Bored Panda all about laughter and living well. According to her humor can help us deal with loss and take some of the sting out of it. “Providing it’s done tastefully,” she said. “Most people wouldn’t want the people they leave behind to be sad for too long.”

According to Ariane, the woman’s obituary is “is affectionate as well as funny, and the woman would have laughed at it herself.” She added: “But it helps that she had lived a long and full life. I think this would be less possible with someone who died young.” Scroll down for Ariane’s advice on living a long and healthy life!

Renay Mandel Corren’s son, Andy, wrote her obituary and he was as witty as he was honest about his mother’s life 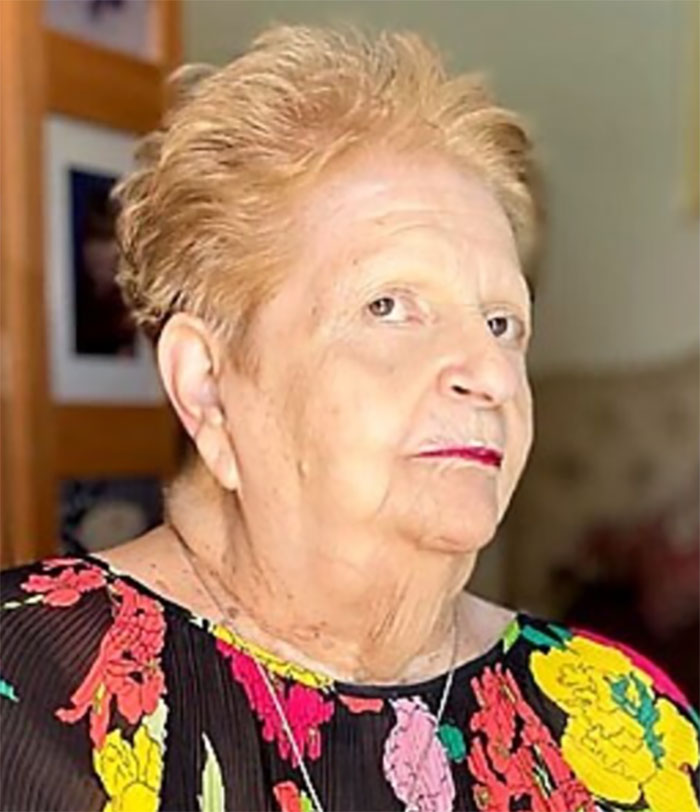 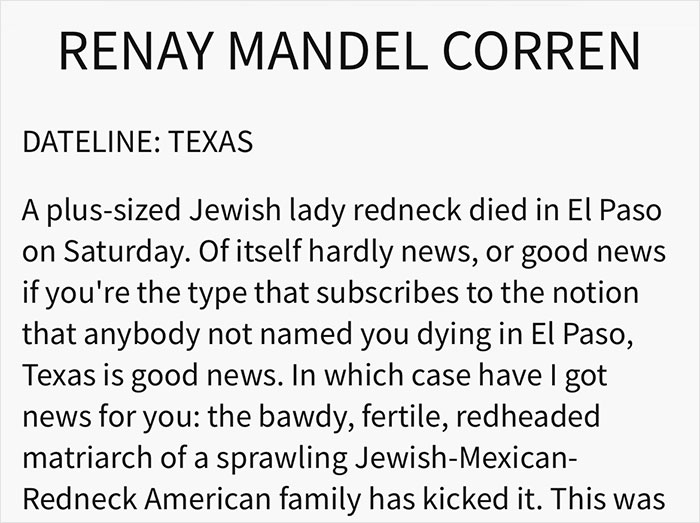 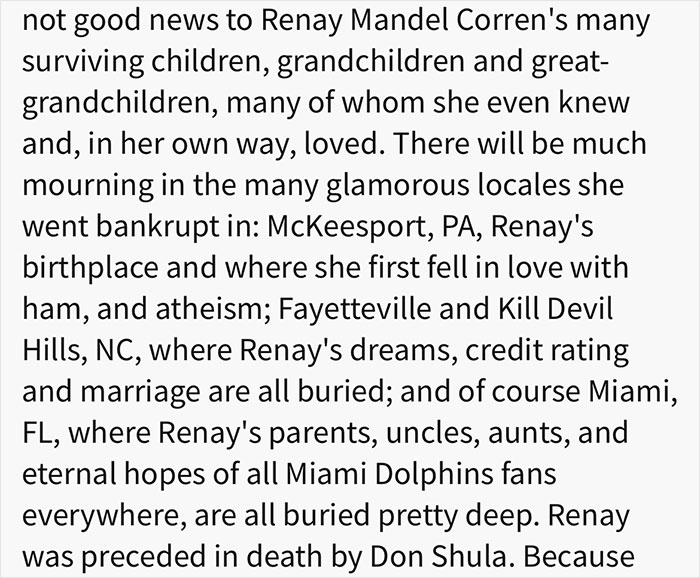 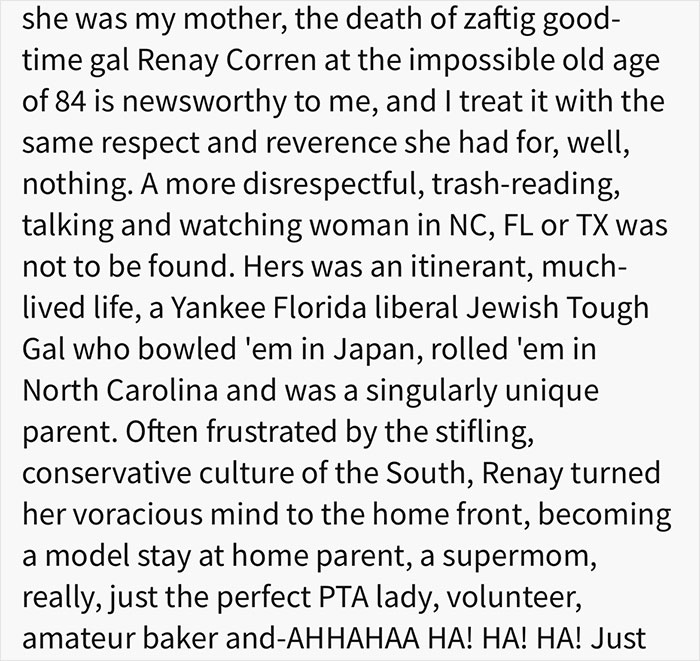 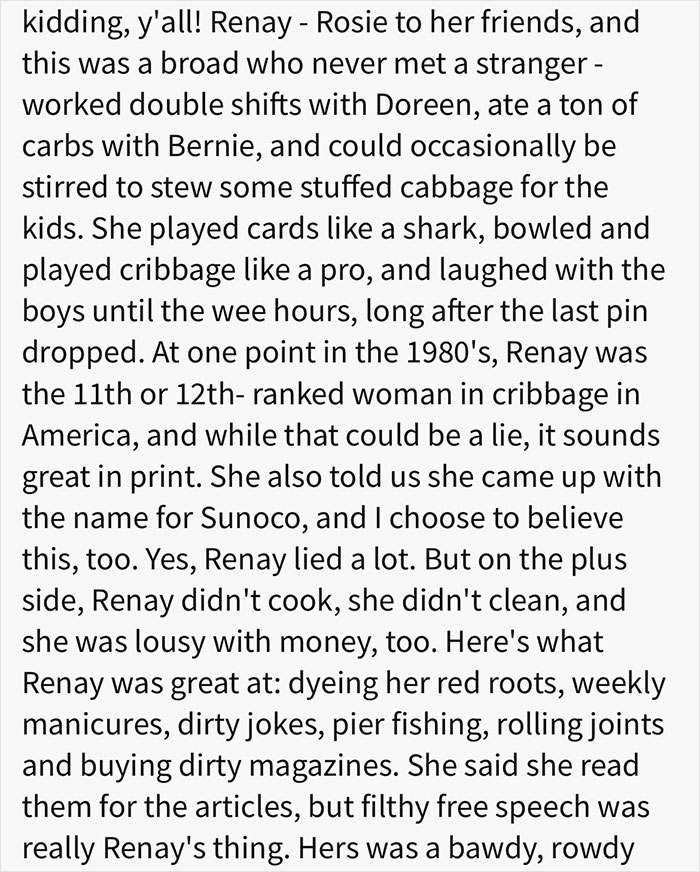 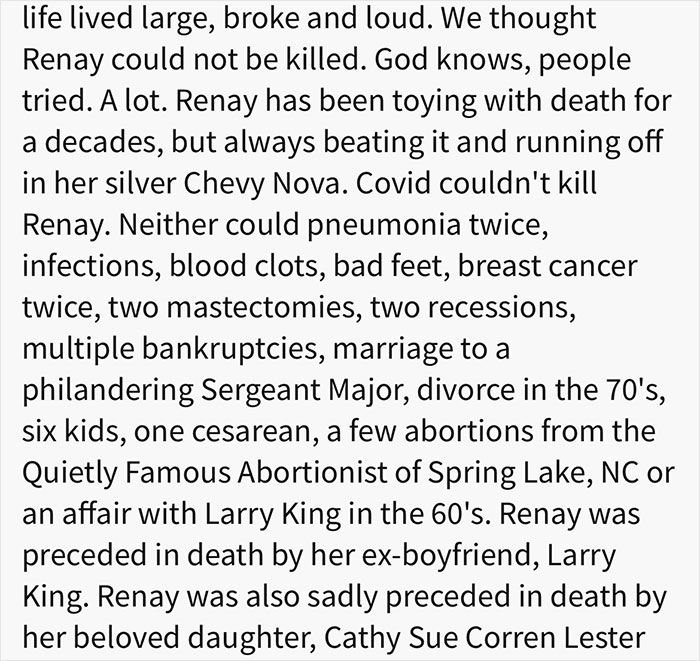 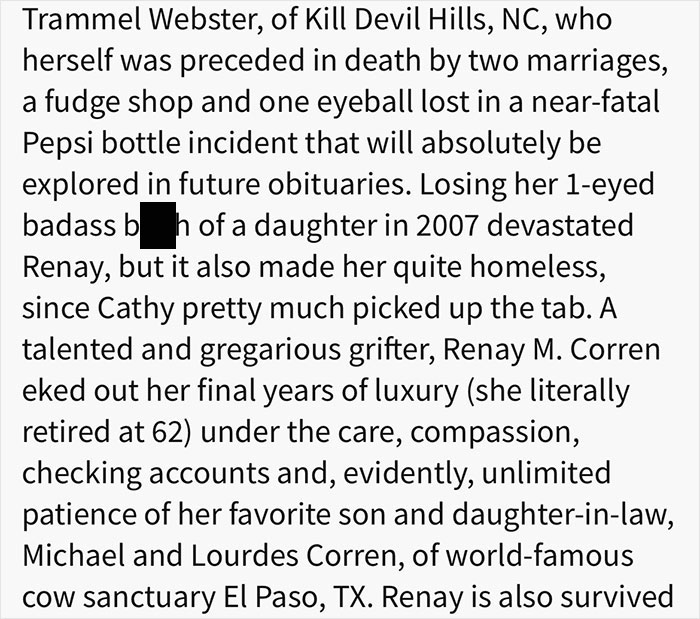 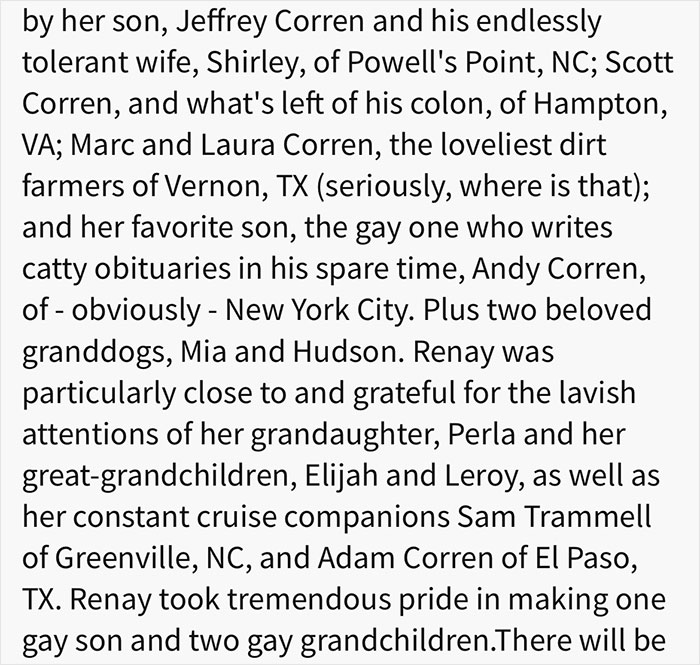 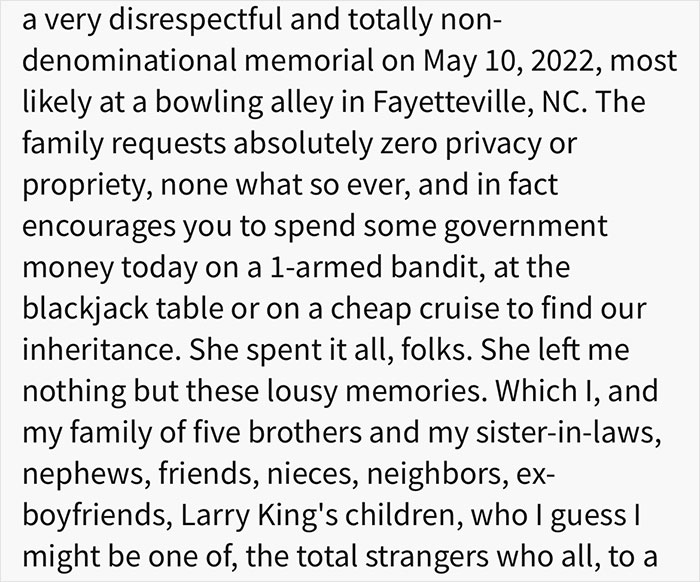 Writer Ariane was kind enough to share some of her best tips for living to 100 years old. “Exercise as much as you can, go vegan but also eat fish twice a week, drink lots of green tea and coffee, nurture loving relationships, surround yourself with great friends and family, and look on the bright side! The happier, healthier, and more active you are, the longer you live on average,” she shared with Bored Panda.

In Ariane’s view, being “kind and generous of spirit” leaves the most lasting impression on the people around us, “no matter whether you have a big personality or not.” However, she noted that “it’s definitely easier to poke fun affectionately at someone who has lived a colorful life, but not everyone wants to live like that.”

While it can seem peculiar to an outsider that someone (including complete strangers on the internet) is laughing when a person has died, the fact of the matter is that humor is very important during times of grieving.

“When we are in the depths of despair over the loss of our loved one, it is hard to think that we will ever smile again let alone laugh. One of the tasks of grieving is to learn to laugh again,” Psychology Today writes, saying that it’s “good for the soul.”

Psychology Today noted that one study, conducted by the University of Berkeley, found that people who have lost their partners experienced less anxiety and depression if they could smile and laugh remembering the loves of their lives.

In fact, some bereavement groups encourage their members to share the humorous moments they shared with their partners with others. In short, learning to laugh during the hardest times makes us more resilient and helps us heal. Humor is like shining a light in the darkness.

What’s more, it’s not just the bereaved who find laughter vital. Those who work with the dying, for example, hospice employees, also rely on humor to help balance out their emotional exhaustion. What’s more, sharing a joke or two helps bond with your colleagues who are going through the same difficult experience as you are. So don’t be scared to laugh in the darkest moments, Pandas.

The internet went nuts after reading the obituary. They thought Andy was a comedic genius and talented writer 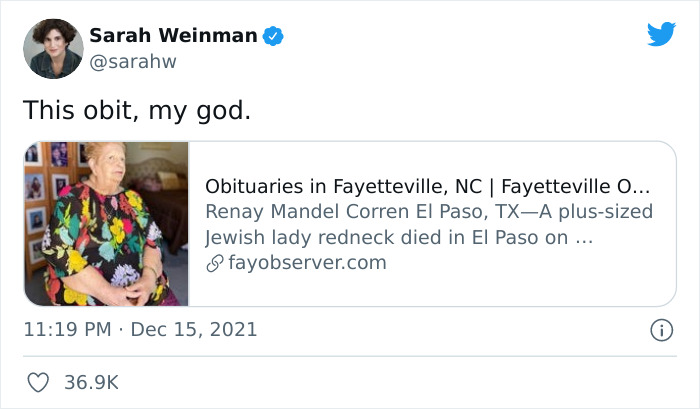 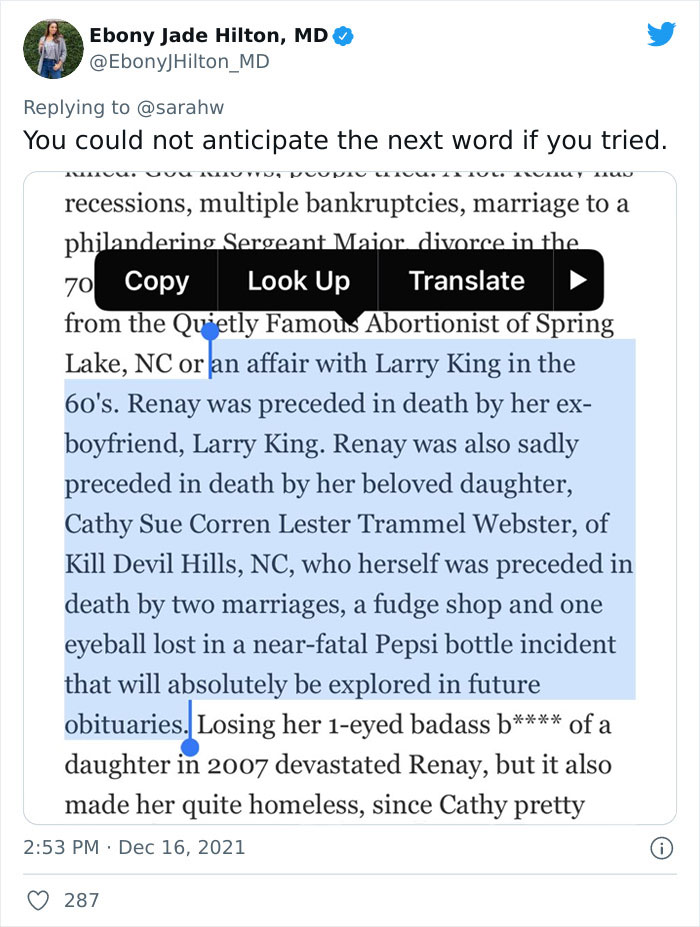 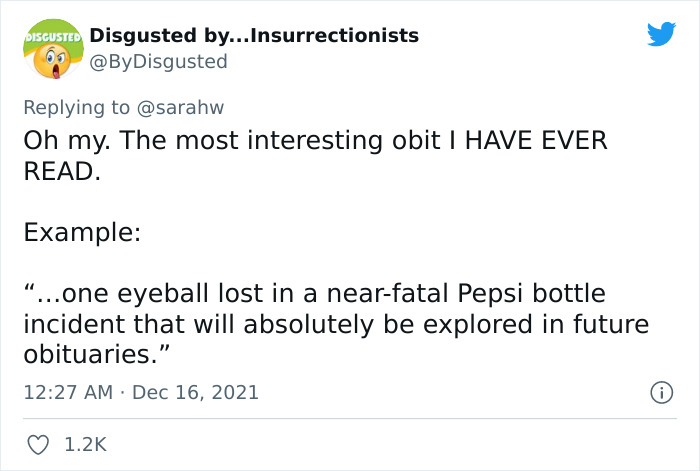 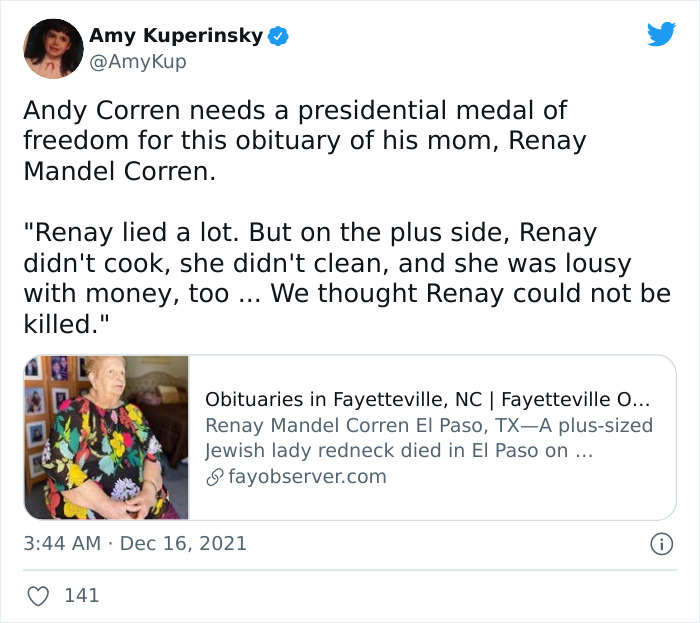 The post People Are Laughing At The Hilariously Savage Obituary Of A “Bawdy, Rowdy” Mother Written By Her Gay Son first appeared on Bored Panda.