Cartoons hold a very special part in many childhoods. Whether you’re an adult, an elder, or just a little toddler, you can think of that one show that rocked your world. 90s babies might remember solving spooky mysteries with good ole Scooby Doo, trying to save the family with Courage The Cowardly Dog, and running the cul de sac with Ed, Edd n’ Eddy. Good times.

Now, what I write right here might seem a little controversial. However, you can’t argue that ghosts, various creatures of the night, aliens and imaginary lifeforms, as well as characters with incredibly distorted features haven’t had more screen time than people of certain minorities.

Today we’ll be talking about LGBTQ+ representation in media, considering the fact that one of the most popular children’s TV shows Peppa Pig has, for the first time, included a lesbian couple, and the internet has responded with both praise and disdain. So let’s dive into the magical world of unconditional acceptance. 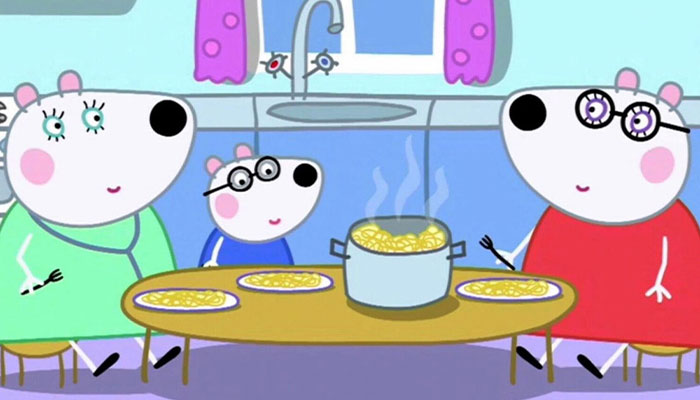 Well would you look at that, Peppa Pig, the children’s TV show, has finally introduced its first same-sex couple on the program! For those unfamiliar with the show, since its premiere in May 2004, it’s become one of the most popular TV shows for preschoolers, featuring a little piggy named Peppa and her little everyday adventures alongside her family and friends.

Episode 41 of season seven, titled Families, aired on Channel 5 on Monday morning, which saw the introduction of Penny Polar Bear’s two moms. In the episode, Peppa Pig and her classmates are asked by their teacher to sketch pictures of their families to be put up on their classroom wall. They also have to give a short little introduction to the members of their family, describing their job and characteristics.

The episode aired on Monday and featured Penny Polar Bear’s two moms: “One mummy is a doctor and one mummy cooks spaghetti. I love spaghetti!” 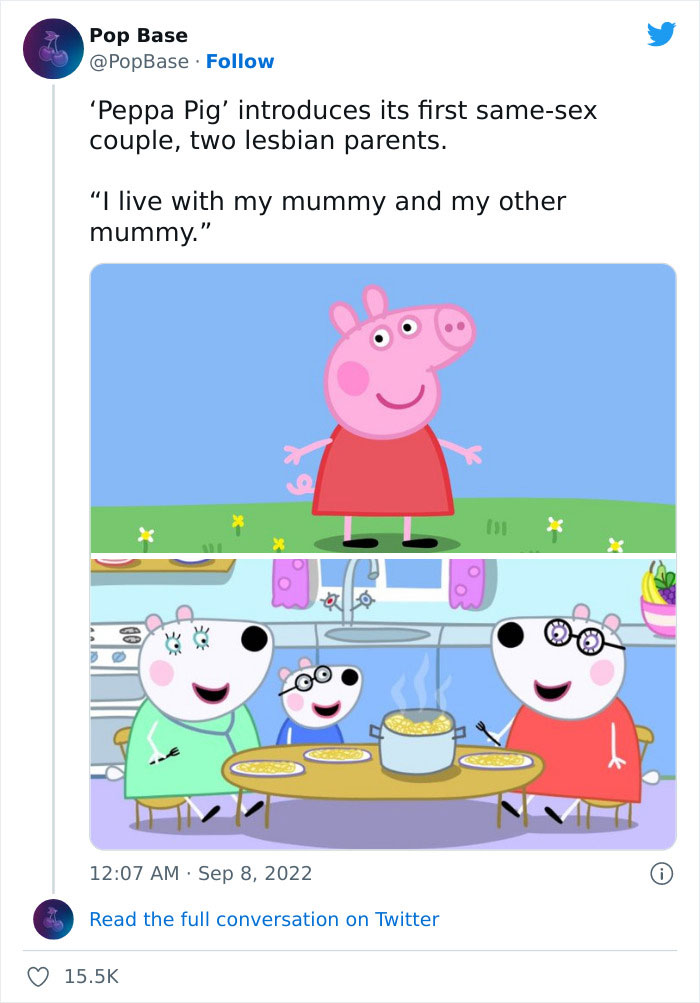 Penny proceeds to draw two female polar bears wearing dresses. She tells her classmates: “I’m Penny Polar Bear. I live with my mummy and my other mummy. One mummy is a doctor and one mummy cooks spaghetti. I love spaghetti.” Teacher Madame Gazelle responds: “Lovely, Penny.” Who doesn’t love a good plate of pasta?

Whether influenced by it or not, the move to include the lesbian parents coincided with a 2019 petition which garnered over 23,000 signatures. “Children watching Peppa Pig are at an impressionable age, and excluding same-sex families will teach them that only families with either a single parent or two parents of different sexes are normal,” the petition read. “This means that children of same-sex parents may feel alienated by Peppa Pig, and that other children may be more likely to bully them, simply through ignorance.”

The move was widely discussed, with people taking to social media to express their views: some absolutely loved it, others detested it 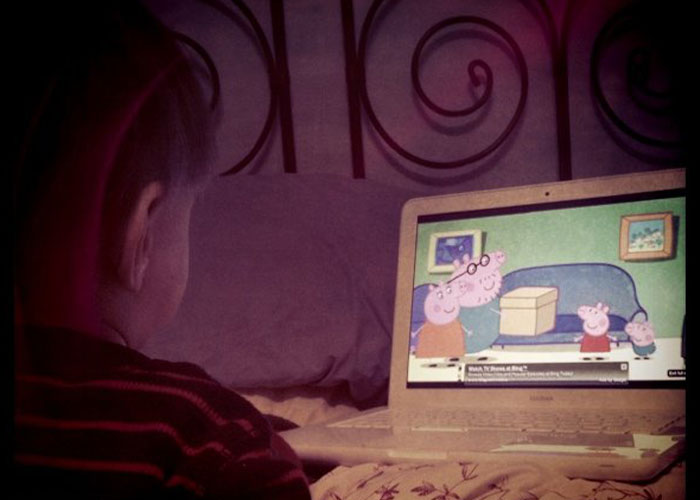 Following the airing of the episode, social media channels exploded with reviews. Some welcomed the new characters and showered the show with praise, while others weren’t so pleased. One person wrote on Twitter: “Some kids have gay parents in real life. Maybe they won’t get teased for it as much if it’s normalized. Representation matters.”

Another user said: “Ok imma start by saying I have a 4 yr old cousin lol… THERE ARE LESBIAN MOMS IN PEPPA PIG????? adult shows struggle with representation and peppa pig just out here giving us lesbian polar bears???”

The introduction of Penny’s two moms has also gained the respect of some prominent LGTBQ+ activists. Robbie de Santos, director of communications and external affairs at LGBT rights charity Stonewall, told the BBC that the inclusion of a lesbian couple was nothing short of fantastic. “Many of those who watch the show will have two mums or two dads themselves and it will mean a lot to parents and children that their experiences are being represented on such an iconic children’s program,” he said.

One person wrote on Twitter: “Some kids have gay parents in real life. Maybe they won’t get teased for it as much if it’s normalized. Representation matters” 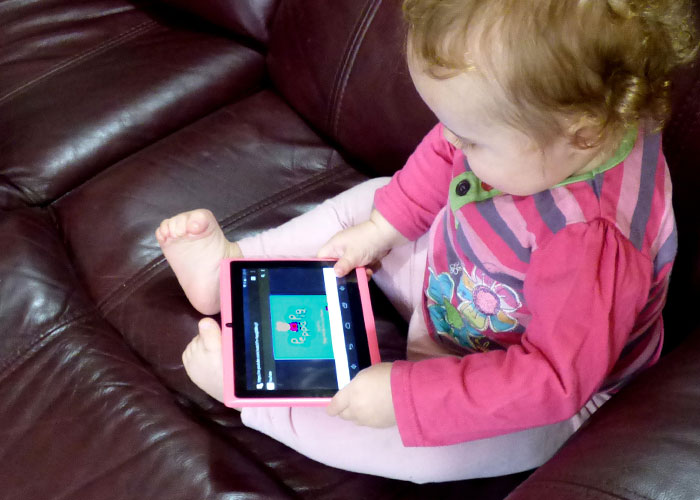 However, there’s the other side of the coin, with one person writing: “Ffs leave our f*****g kids alone.” Another joined in to say: “When will they stop this agenda?” And the last one: “The LGBTQ are becoming annoying, first Superman, then Peppa pig. They should just form/create their own characters. At this rate the other letters will be the minority.”

All I gotta say for the latter—no one wants your kids. What agenda? Oh, you mean the inclusivity and normalization of human beings that aren’t straight? And seems the last one doesn’t want to become an outcast, underrepresented minority; go figure. “But my child will think it’s normal!” Why isn’t it?

However, there’s the other side of the coin. One wrote: “Ffs leave our f*****g kids alone.” Another joined in to say: “When will they stop this agenda?” 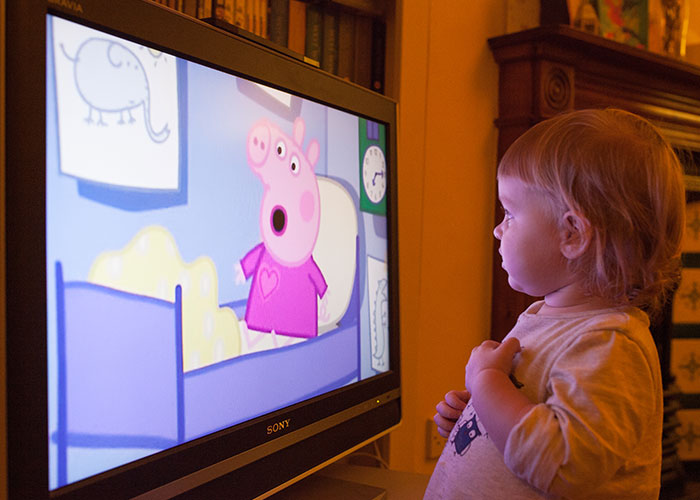 Some might question my wording at the end of the introduction. The magical world of unconditional acceptance. Sounds like a cartoon in its own right; however, sometimes it feels that we as humans will be able to accept one another as such, without prejudice or labels, in a fictional world only.

Life is far too complex for our 2% of unlocked brain power to comprehend, and the cultural, generational stigma of the past 50-70 years, in addition to toxic nostalgia that may span thousands of years to prove a very narrow point, is a nemesis only Superman could take on.

As the World Economic Forum states, media images can educate audiences and humanize marginalized communities, but when it comes to LGBTQ+ people, increased representation is needed to accurately depict this varied community: “A unified measure of LGBTQ representation can be a motivating force for accountability and greater cultural acceptance.”

LGBTQ+ people have faced oppression and aggression for centuries. Although it seems to be getting better in some cases, there’s still a lot that needs to be done 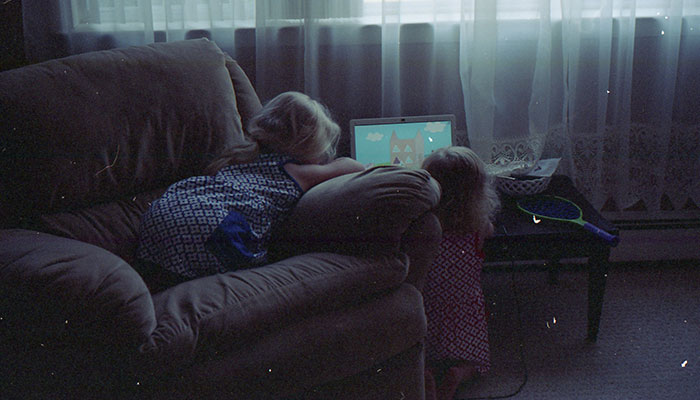 LGBTQ+ people have faced oppression and aggression for centuries. Although it seems to be getting better in some cases, there’s still a lot that needs to be done in order to weed out the roots of the toxic mentality that spans from generation to generation. There is still much to learn about one another, and the only way to do that is to open our minds to the possibility of being wrong about something we have been taught to believe. And it’s not easy, but it’s necessary.

One way to do that is to encourage discussion, similarly to what Peppa Pig did by introducing the lesbian family. Considering the fact that children do come across others with same-sex parents, the fact that children don’t understand the sexual nature of relationships until they hit puberty—be it LGBTQ+ or straight, for that matter—and the fact that kids will not suddenly become part of the LGBTQ+ community just because they watched a TV show, you really need to ask yourself why you have a problem with it.

At the end of the day, all a child is learning is that spaghetti is nice and that it’s perfectly normal to have two loving parents of the same sex 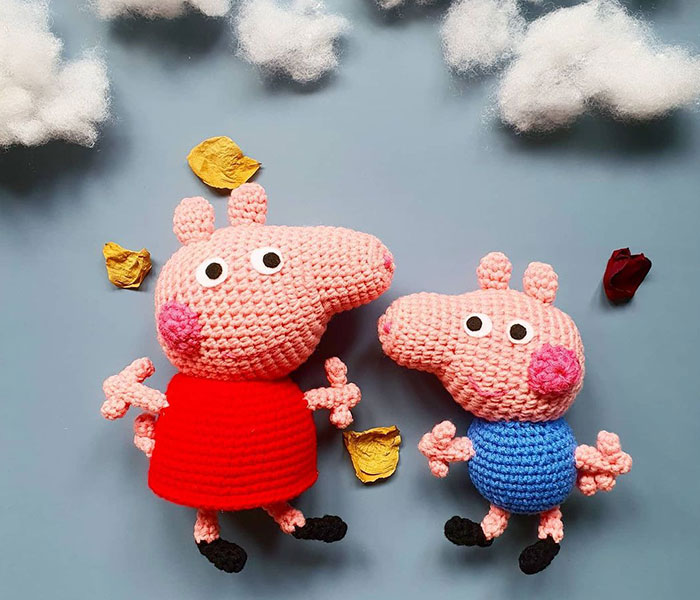 You as the adult are the only one who understands sexuality and attraction. The child is just enjoying cute characters eating spaghetti and learning about the different family models out there.

Peppa Pig is another show to be added to an ever-growing list of shows featuring LGBTQ+ characters, and hopefully this is just the start, as more children’s programs get on board with showing real families, in whatever shape or size they may come in.

Let us know your thoughts in the comments below, and if you’re part of the LGBTQ+ community, tell us whether this sort of inclusivity and representation is something you welcome and wish there was more of. Upvote for good luck and follow the author for more! Au revoir for now.

As mentioned before, people seem divided in their stance on this move. Let us know your thoughts in the comments below! 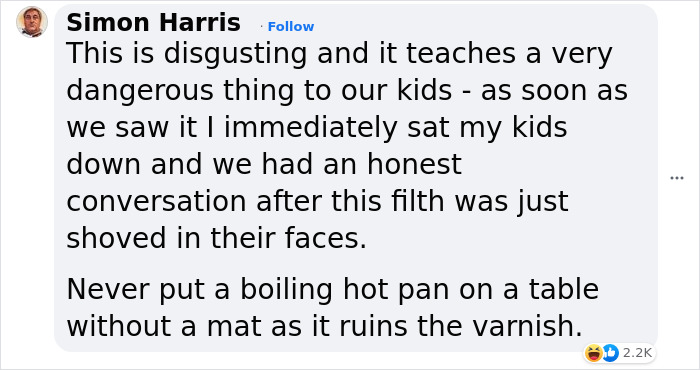 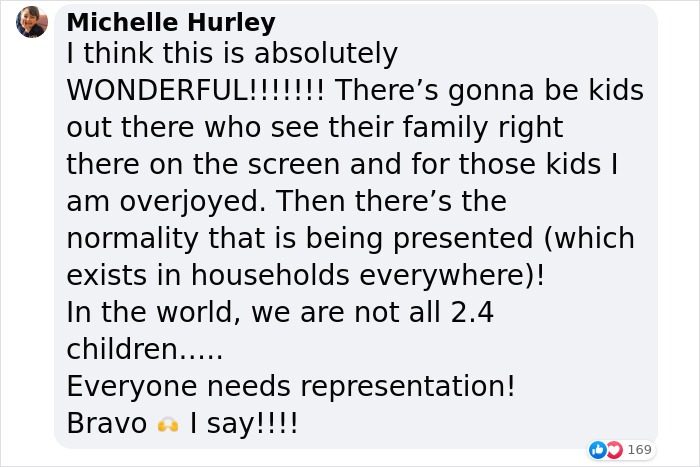 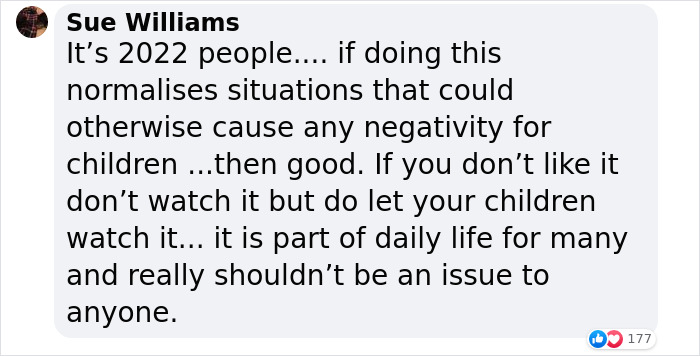 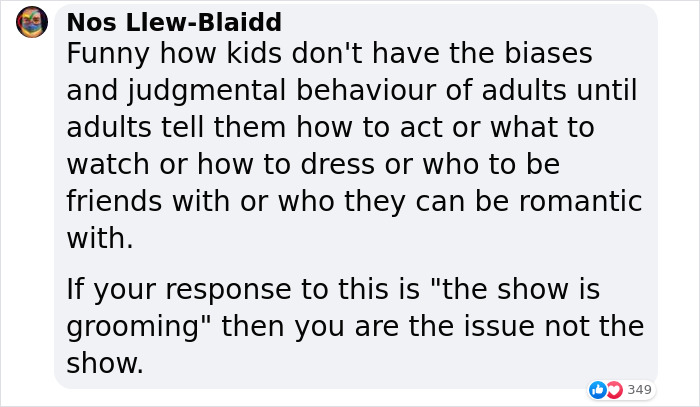 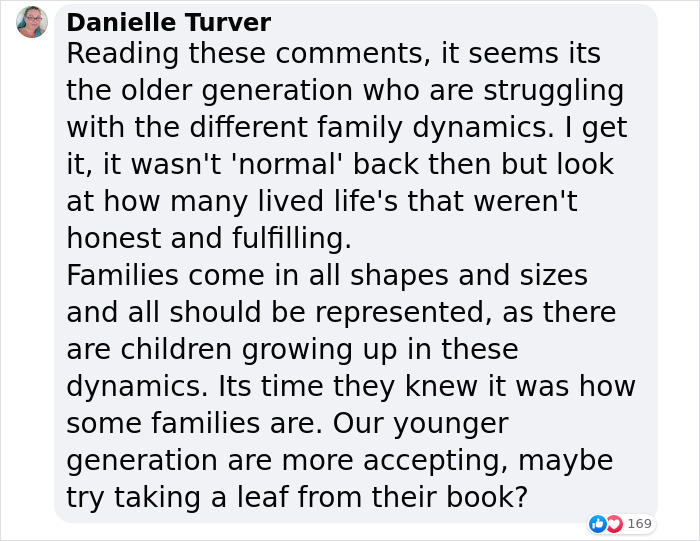 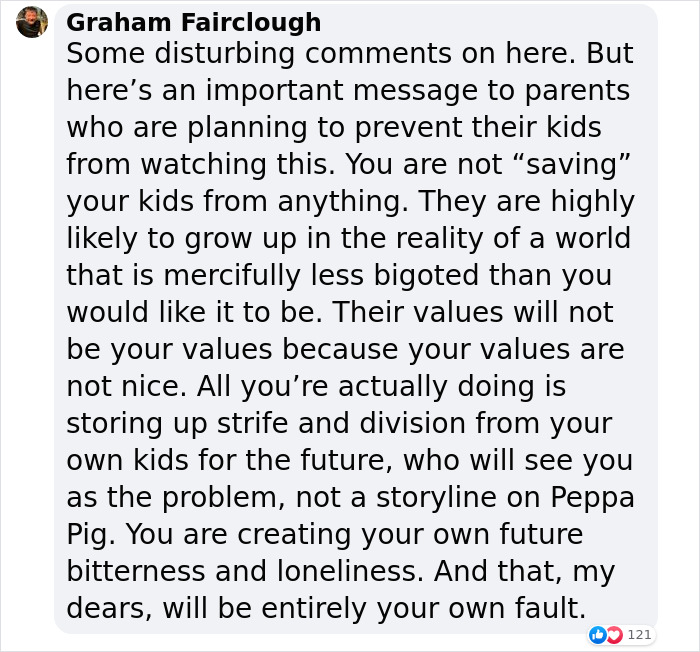