An unusual and rare 1950s prefabricated house, loaded with mid-century modern furniture like a time capsule, is now up for sale. 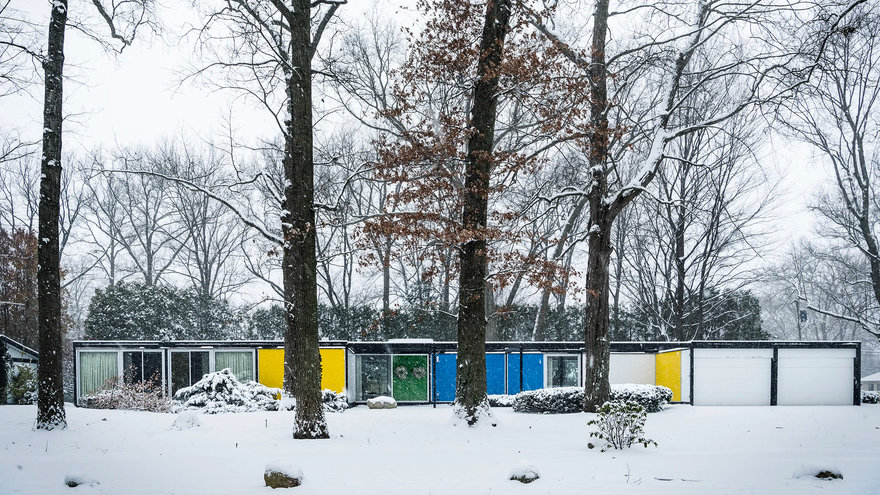 While the home and its contents are a pristinely-preserved example of the mid-century style, in a sense the house is also a symbol of business failure. 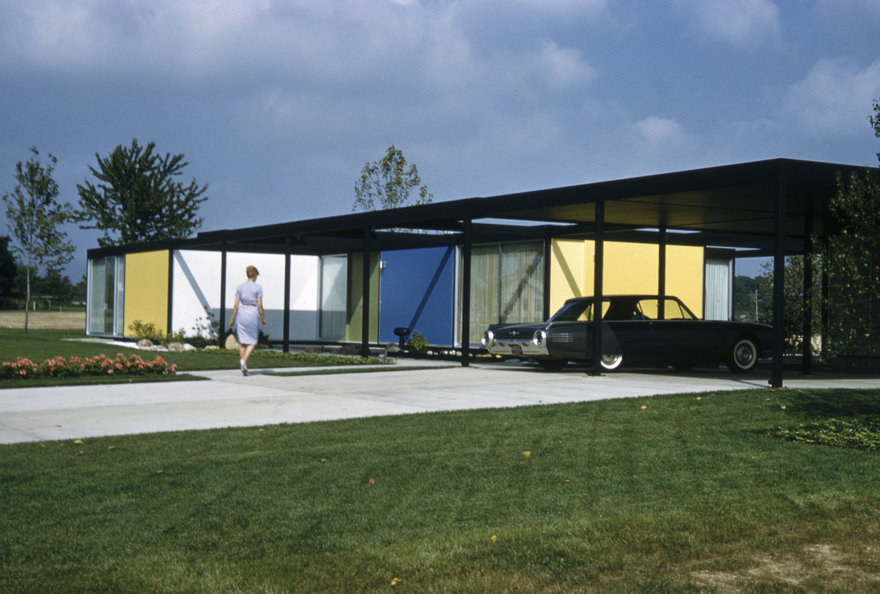 In 1958 a real estate development company called Alside Homes purchased a chunk of land in Michigan City, Indiana, intending to build a neighborhood there. They decided prefabricated was the way to go, and hired architect Emil Tessin (you can look him up, but he’s not famous) to design them. 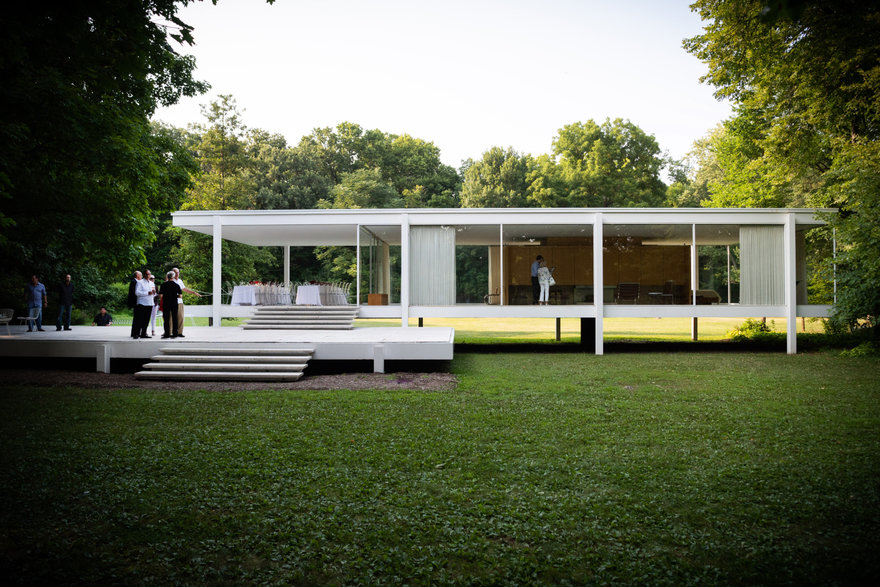 Tessin came up with a steel frame that would hold 12′ x 14′ panels made from a sandwich of aluminum skins and a Styrofoam core. These panels would serve as the opaque walls, while glass panels would serve as the massive windows. The plan was for the panels to be built at a factory and shipped to site for a speedy assembly. Life Magazine, writing an article on Alside’s offering in 1961, described it as an “INSTANT HOUSE. It will come delivered in two trailer trucks and within 48 hours will be completely assembled down to the last fixture and appliance.” 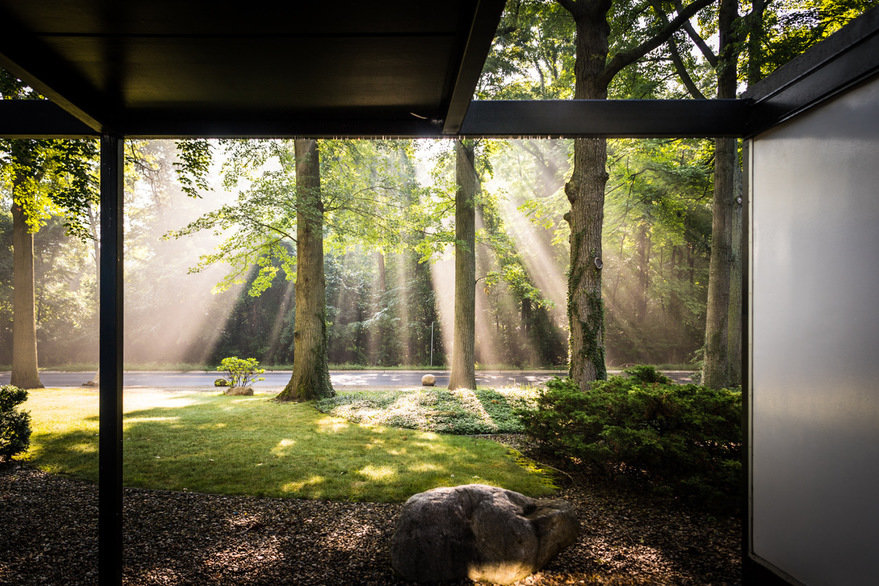 Alside built the first example in the early ’60s on the land in Michigan City. Because it was meant to serve as the model home that they’d use to sell the other plots, it was fully furnished with stylish offerings by Knoll and further kitted out with built-ins by industrial designer Paul McCobb. 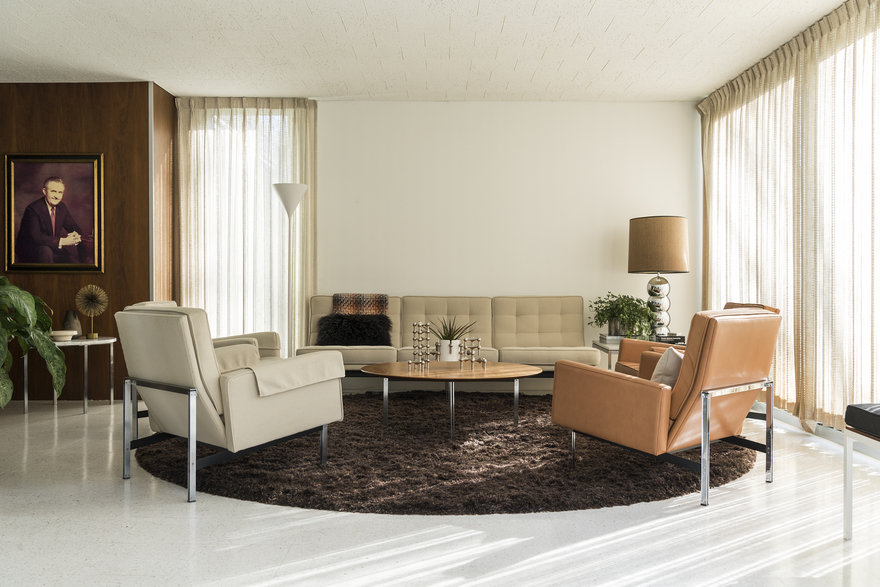 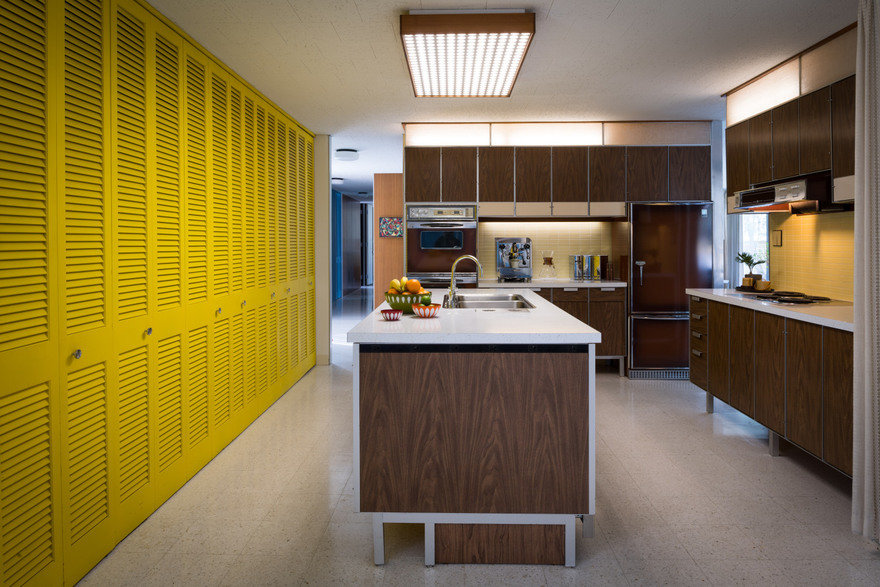 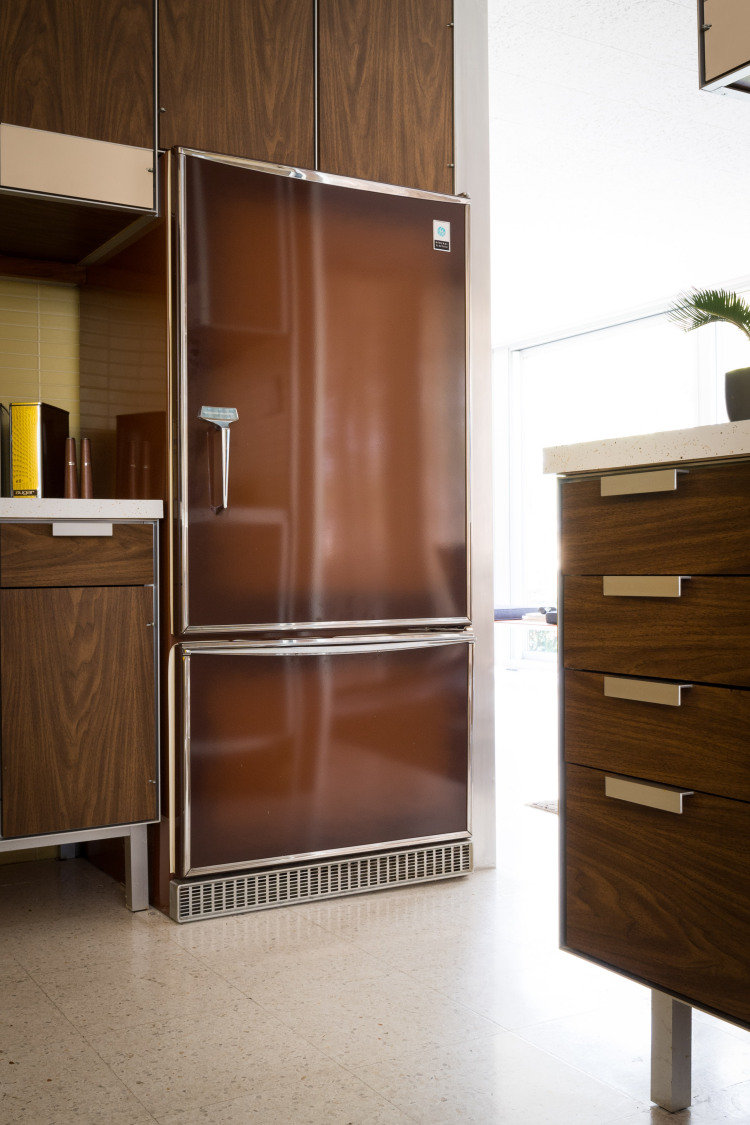 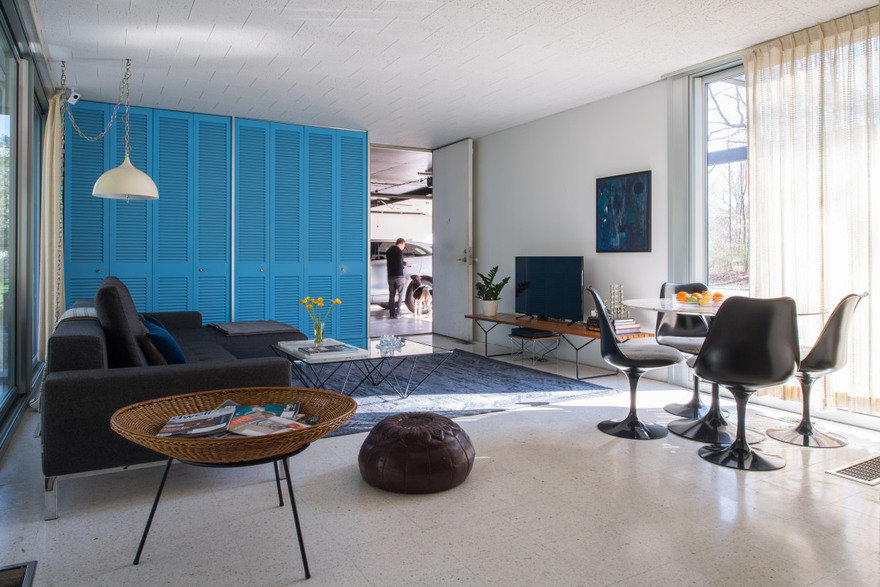 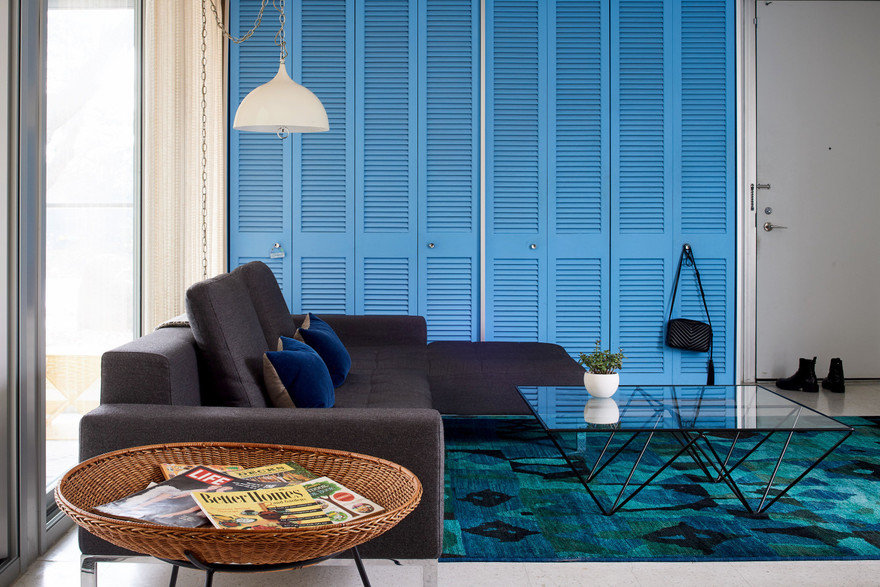 A pathologist named Dr. Robert Frost and his wife Amelia toured the model home and were smitten. But they didn’t want to wait for another version of it to be built, even if it took 48 hours; they fell in love with precisely what they saw and wanted the model home, including all of the furniture in it. So that’s what they purchased. 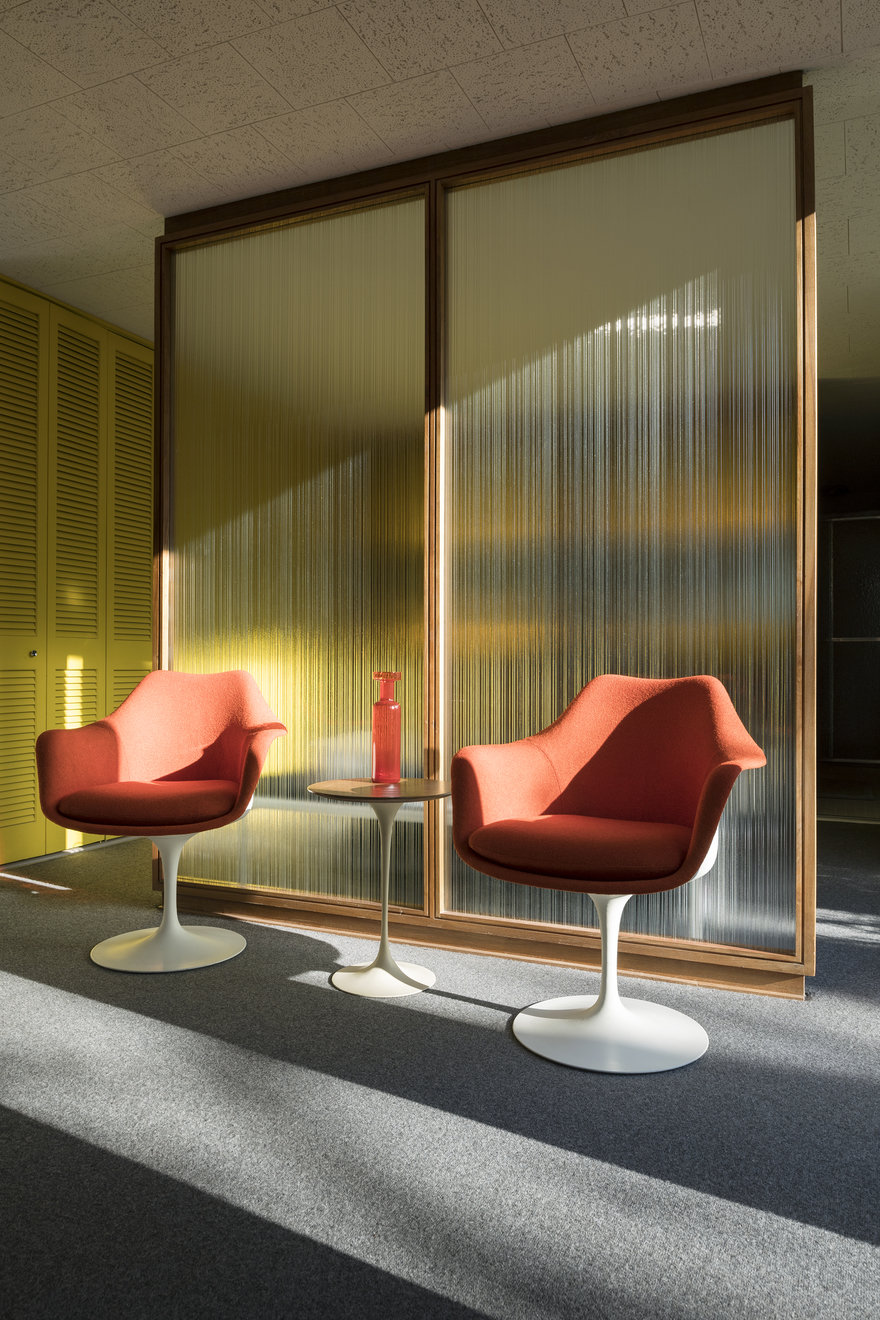 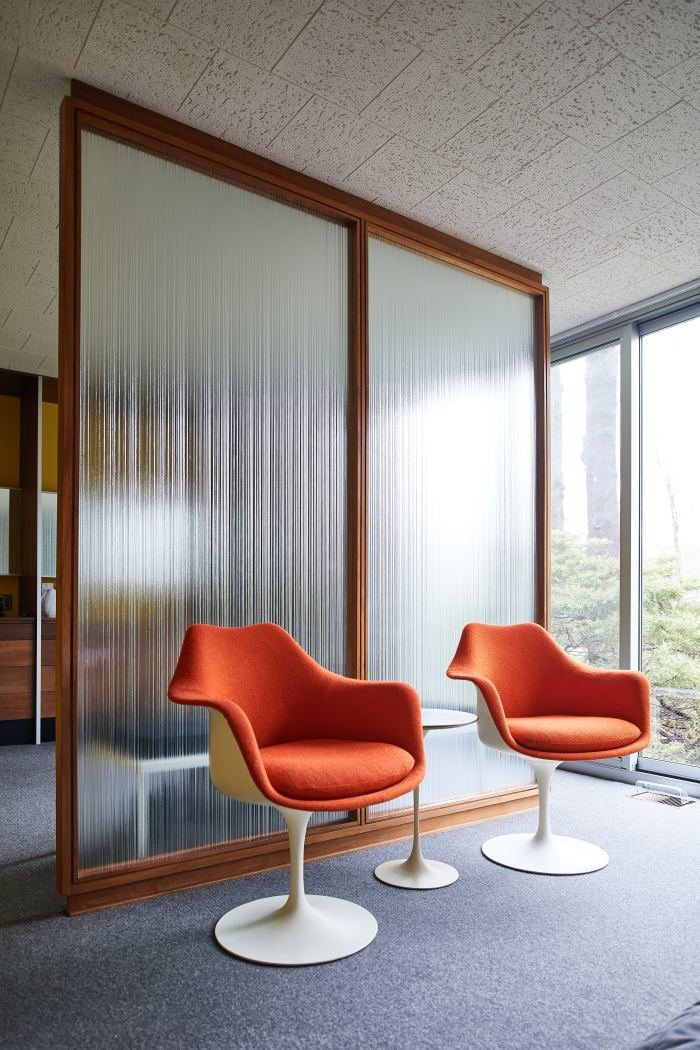 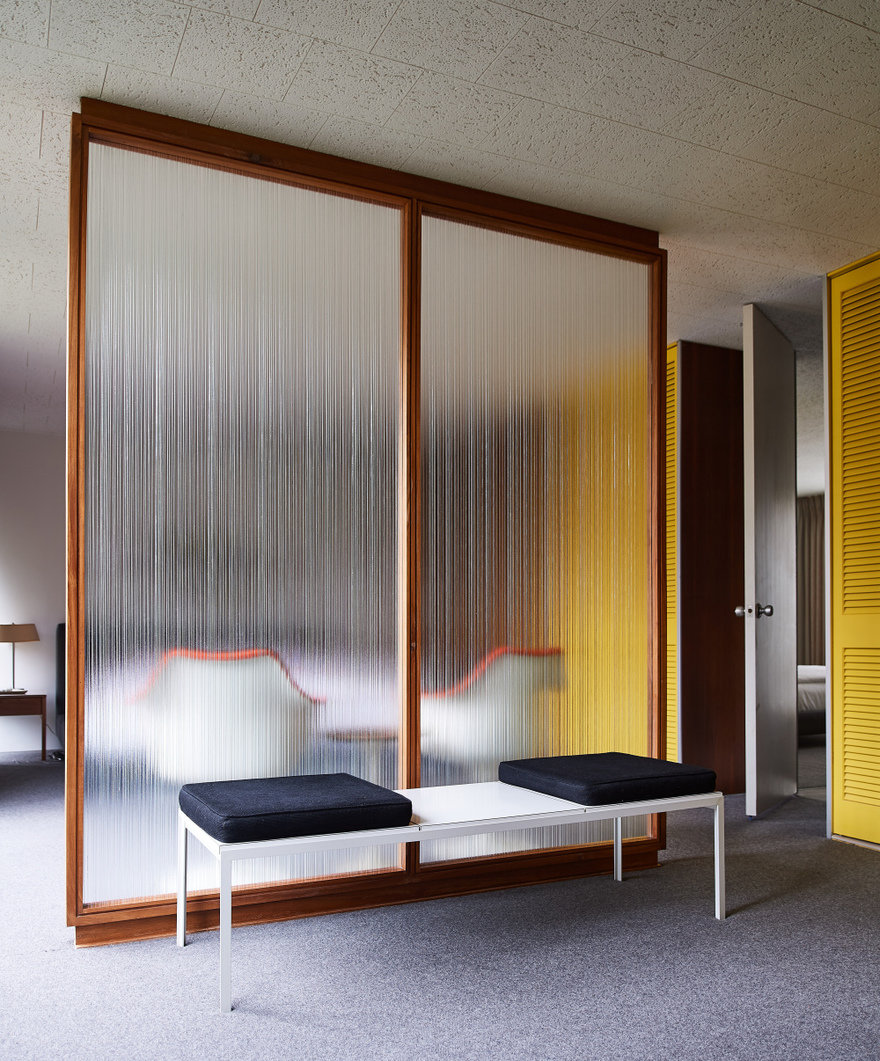 Shortly afterwards Alside Homes went out of business, so the planned neighborhood of prefabricated houses never did pop up around the Frosts–who lived in the house for almost six decades, until Dr. Frost’s death in the mid-2010s. Amelia Frost passed away shortly thereafter. 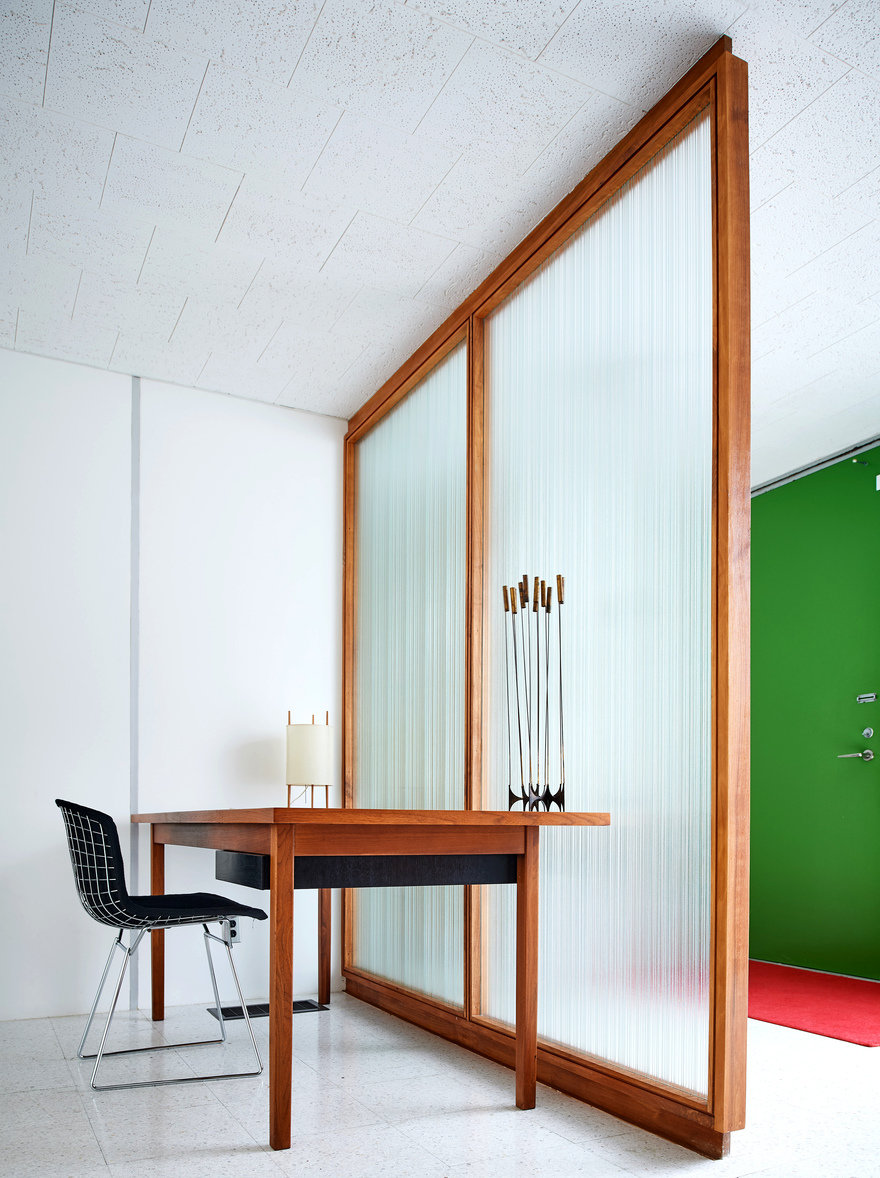 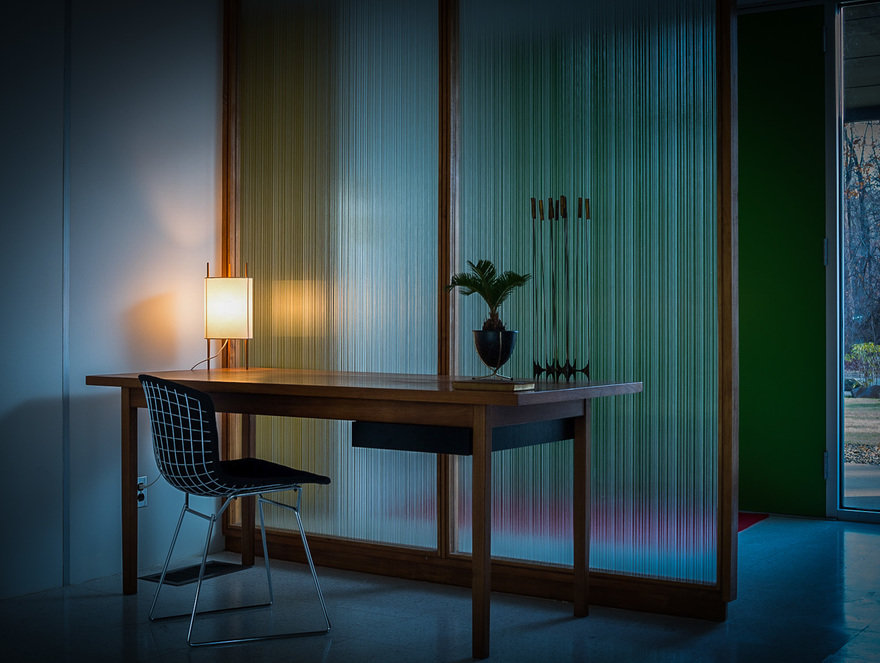 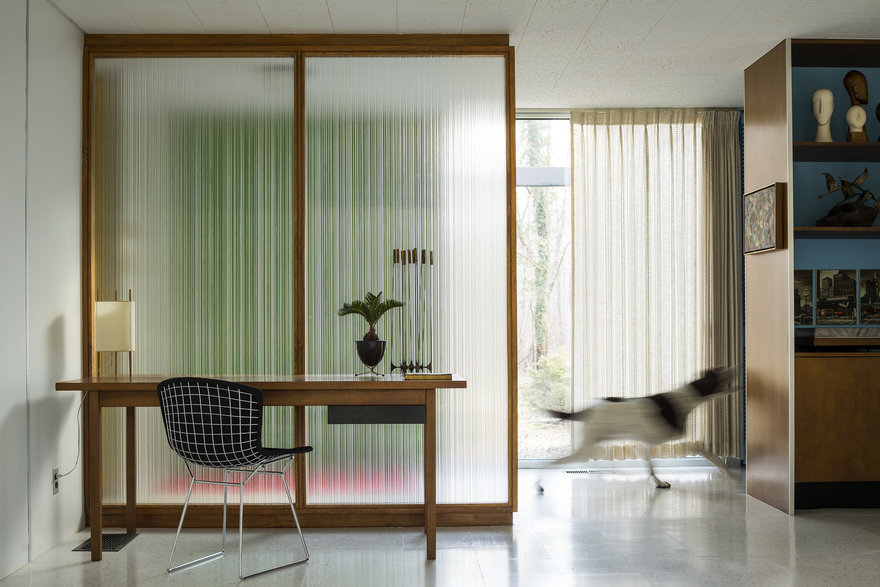 The Frosts were extremely fastidious people. Not only did they never change the décor nor buy new furniture, over all of those decades, but they never even moved the original furniture. “Over time, the legs of the furniture wore holes in the carpet because they were never moved,” Bob Coscarelli, the house’s post-Frosts owner, told Curbed in 2017. 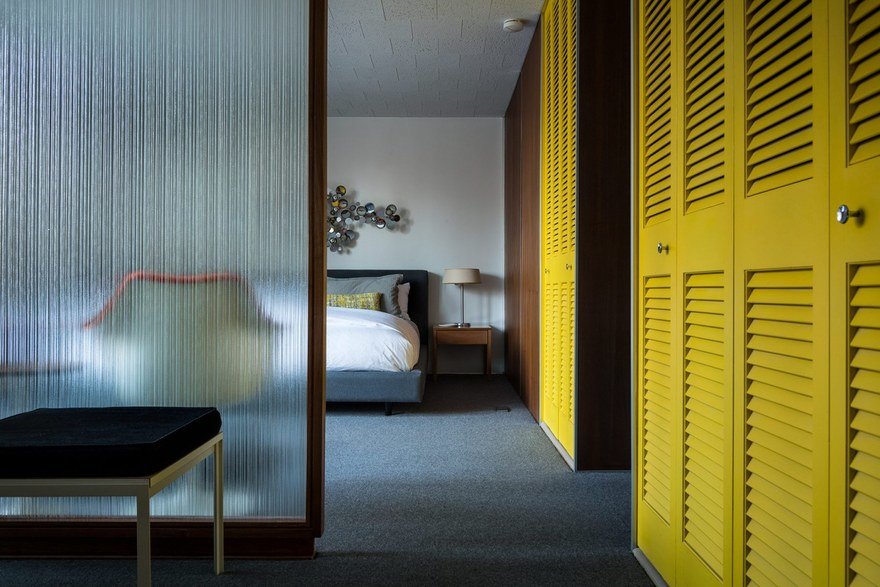 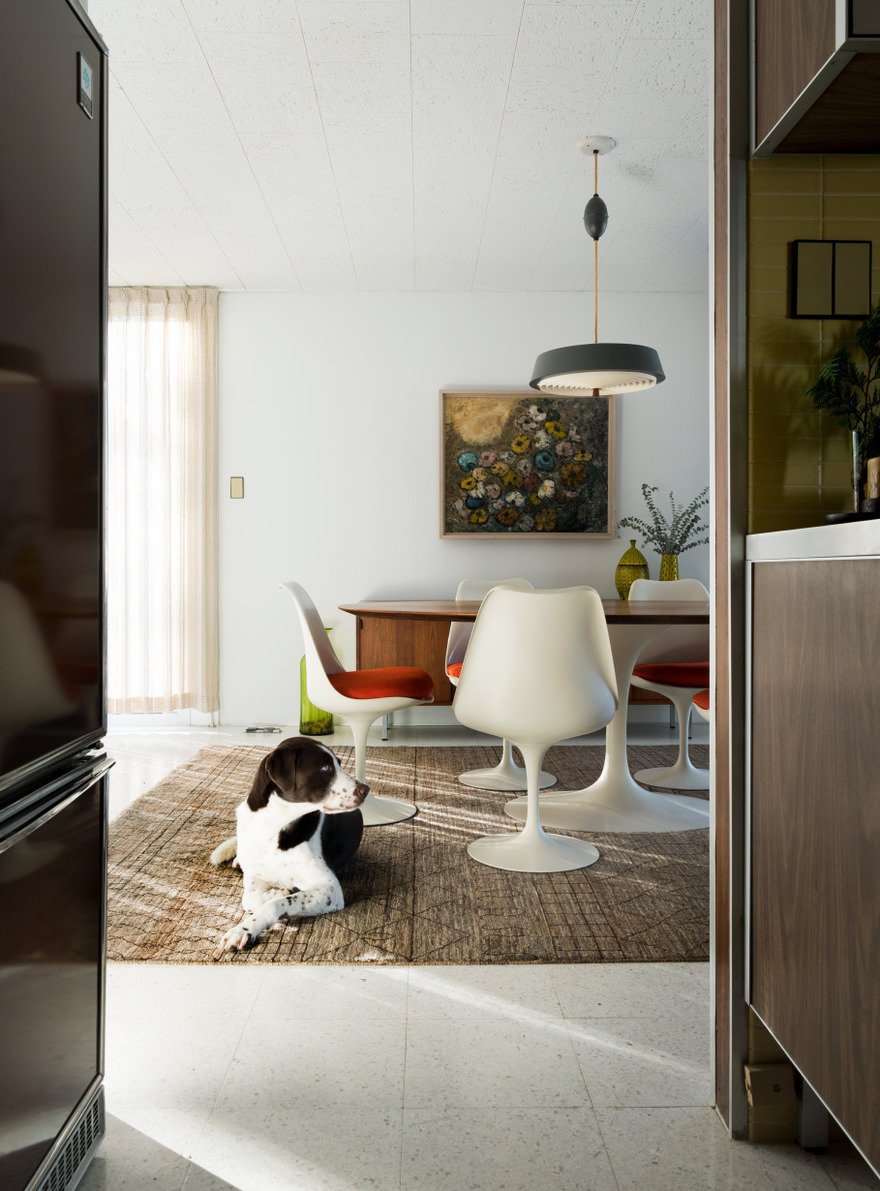 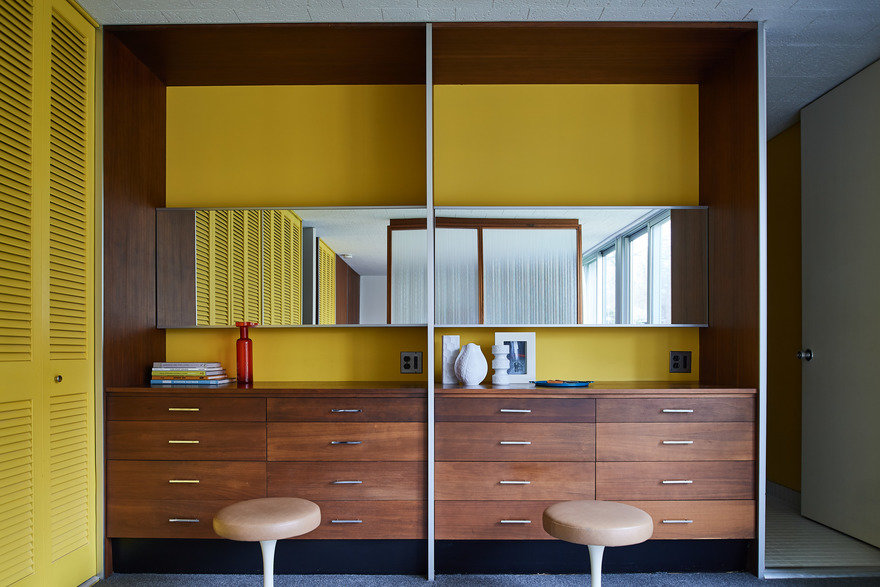 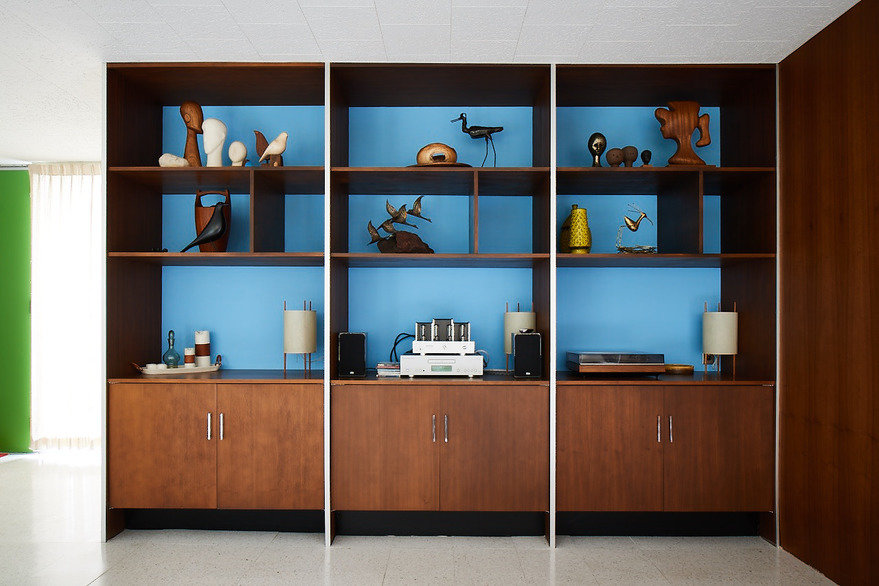 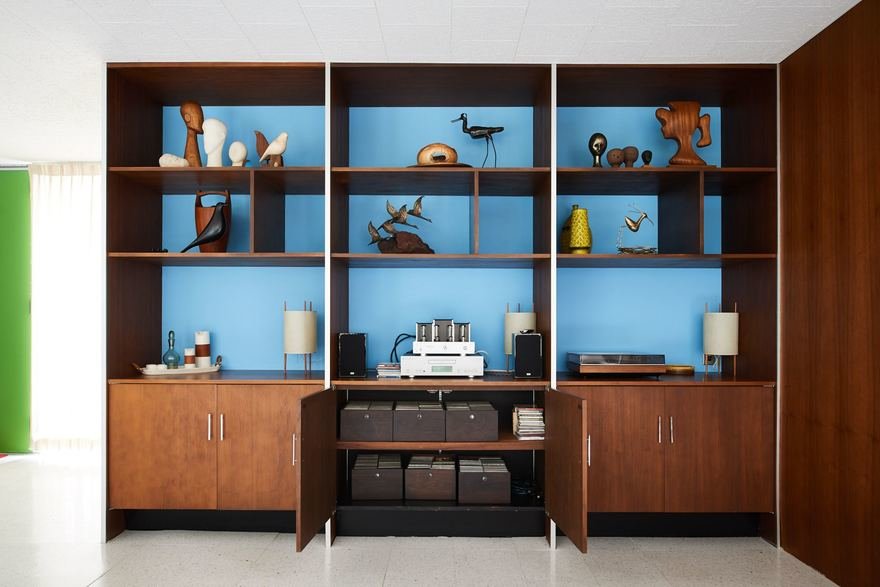 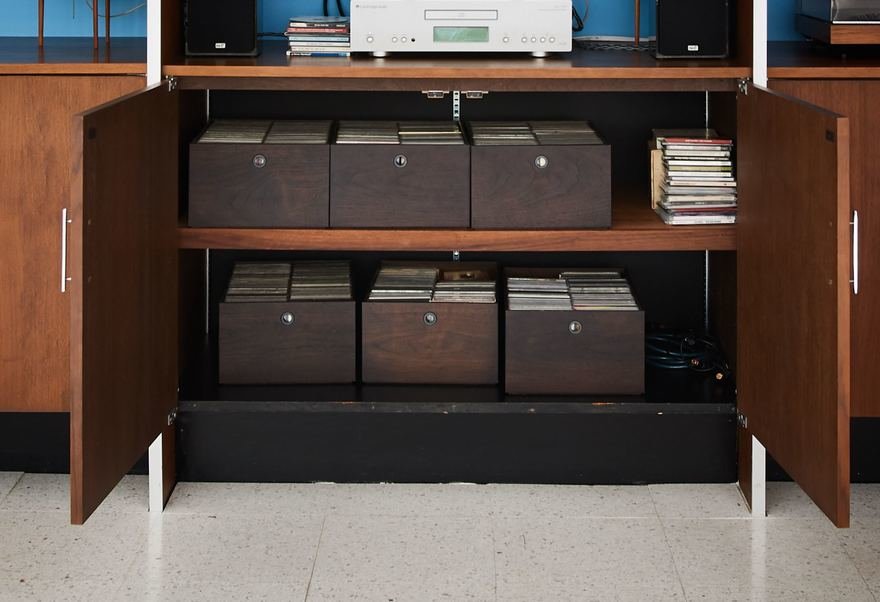 Coscarelli and his wife Karen Valentine purchased the house from the Frost family in 2016, making only minimal changes: The stove was replaced, vinyl tiles were added to the floor, added a swimming pool, and had at least one piece of furniture re-upholstered (see below). 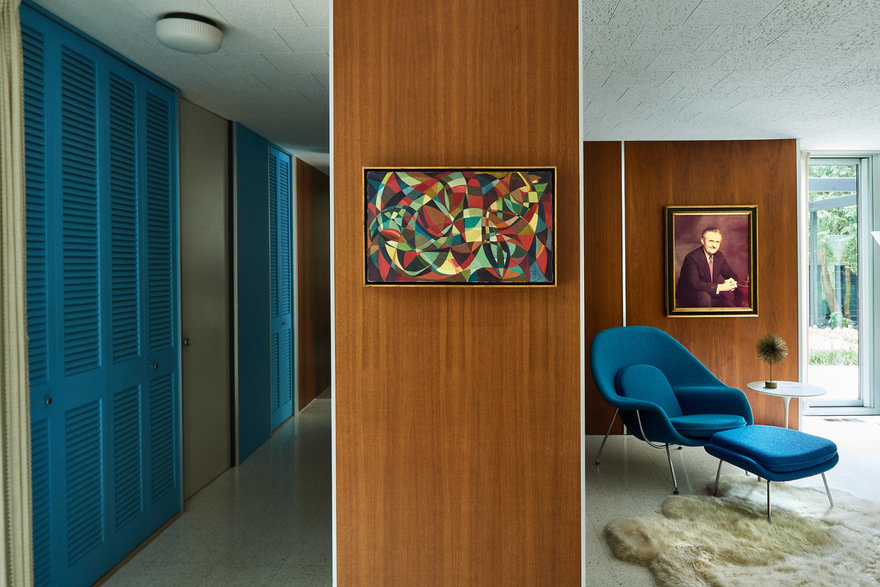 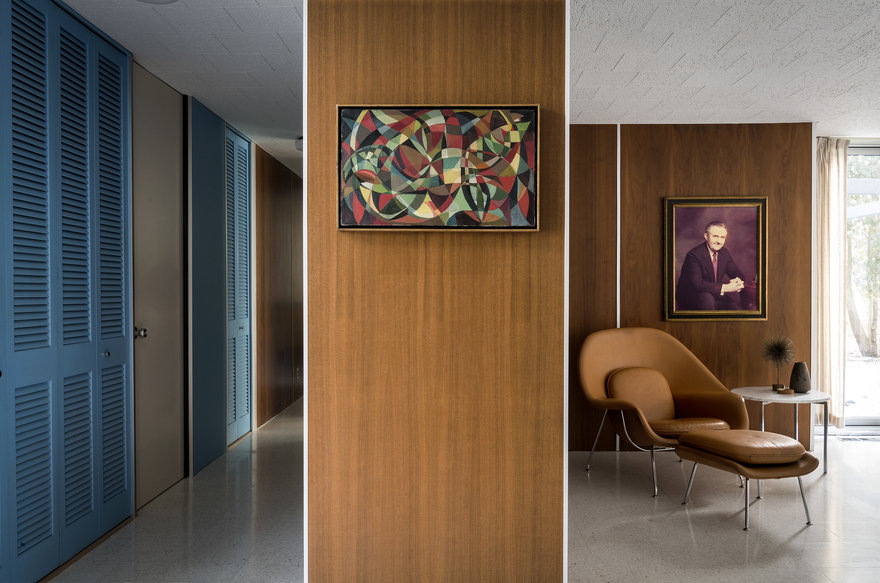