One good turn deserves another. You ought to repay kindness with kindness. Well, ideally. But often it can be hard to know when to lend someone a helping hand and when to say ‘no’ and enforce healthy boundaries. Things can get especially murky, emotionally, when dealing with your relatives whom you love and care about.

Redditor u/Throwaway22155722 shared a story about the sensitive situation they and their daughter are currently in. They’re being evicted by the OP’s brother and his girlfriend, who had agreed to let them stay after the redditor’s divorce. And it all happened because of a single dirty diaper that wasn’t changed. You’ll find the full story below, dear Pandas. Scroll down, have a read, and share your opinions in the comments. Do you think that anyone was in the wrong here? What would you have done? 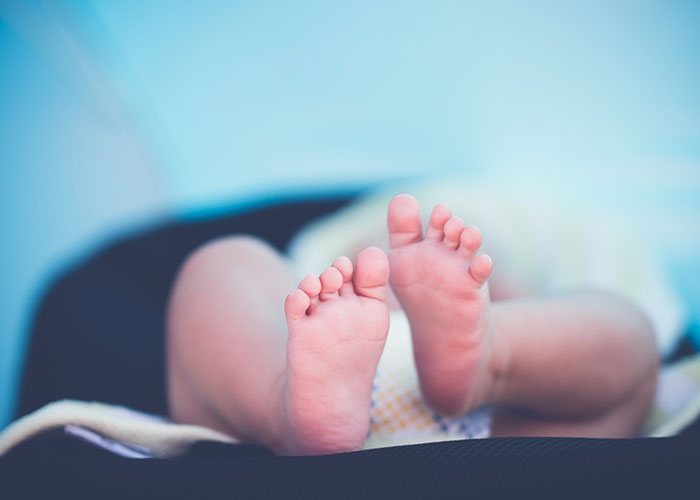 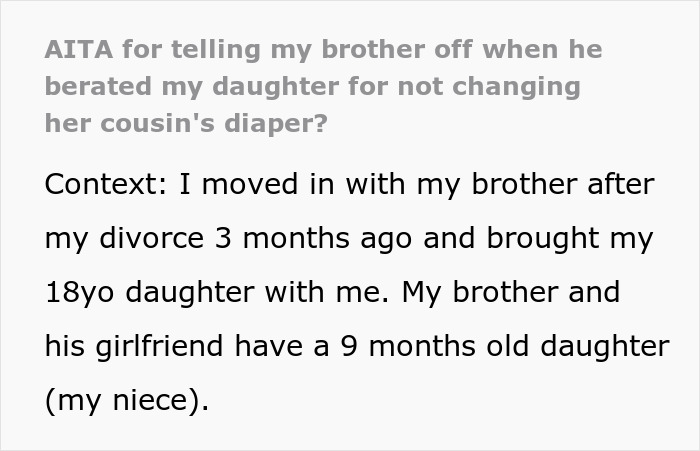 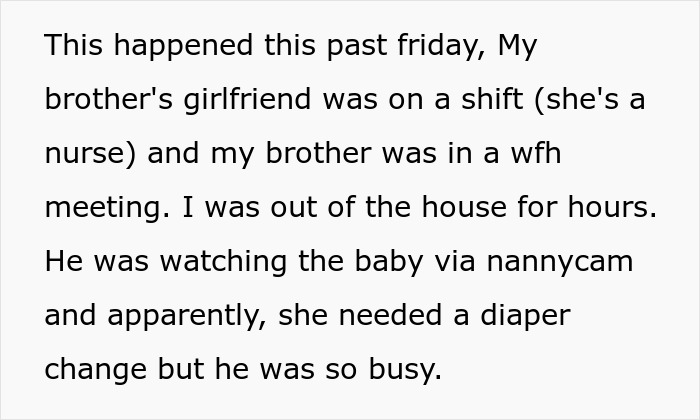 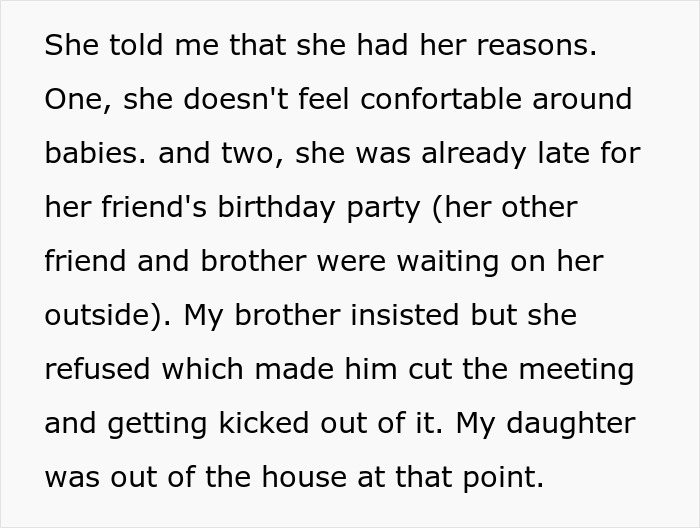 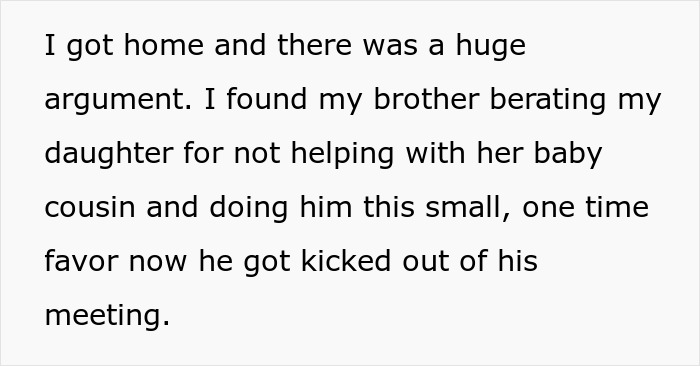 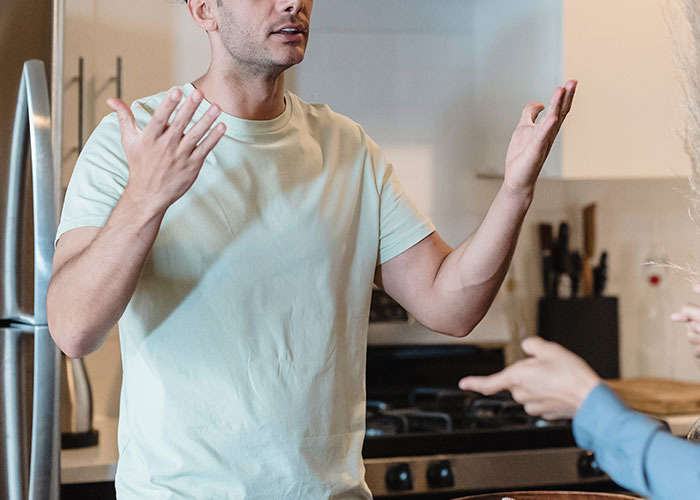 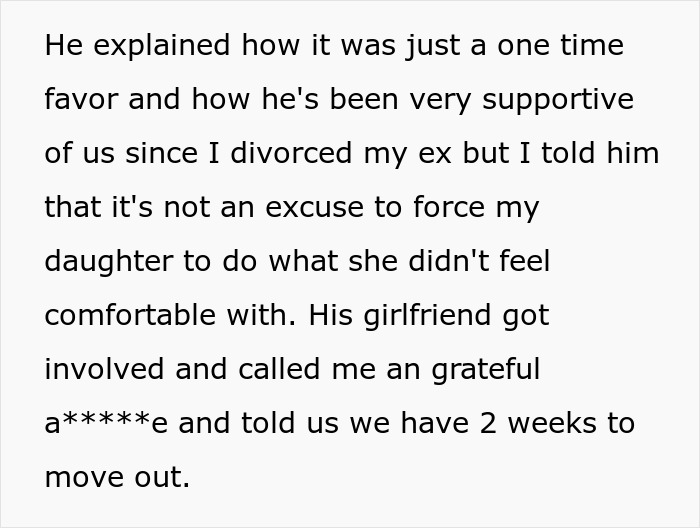 The author of the post wanted to get the AITA online community’s opinion on who was wrong in this particular case. The OP was unsure if they should have called out their brother, who’d berated their daughter. This happened because the 18-year-old didn’t want to change her cousin’s diaper. This devolved into a major argument, with tempers flaring on all sides.

The end result? The brother’s girlfriend got involved and gave their two guests two weeks to pack their bags and move out.

At the time of writing, most redditors believed that there weren’t any jerks in this case. That’s quite a rare occurrence: usually, in these types of stories, there’s a (more or less) clear hero and villain. Not so in this case. It seems like pretty much everyone had good reason to act like they did. However, that doesn’t mean that other internet users didn’t have strong opinions one way or the other. Some thought the OP was a jerk; others deemed that they did nothing wrong; while some even believed that absolutely everyone was to blame.

Unfortunately, the end result isn’t one that’s going to benefit anyone. Especially not the OP and their daughter. Hopefully, everyone will be able to move past the incident. Eventually.

When it comes to close family members, it’s often best to try and resolve any issues in a calm and collected manner. But in practice, tempers can—and do—rise. After all, it’s a very human desire to be understood. It’s also very human to believe that our position is the sensible one: it’s everyone else who’s got it a tad backwards! But, at the end of the day, you have to weigh what your goals are. Would you rather be right? Or would you prefer to be happy?

It’s usually best to find some sort of compromise and meet your loved ones halfway. There’s really nothing better on offer than having an honest conversation about how everyone feels and what kind of behavior irked them. It might feel awkward. It might not be pleasant. But it’s pretty much the only way to find a proper solution to similar situations. And, frankly, it’s better than the alternative: fragmenting the entire family.

Try to think about things from a macro scale. In fifty or so years, would you rather everyone apologized to each other and found a way to coexist? Or would you have been proud that everyone got into a huge argument, and everyone drifted apart?

Very Well Mind suggests that you take a look at how your arguments usually go. Try to identify the patterns. Then, consider how you’d like the conversation to go. Think about the entire tone of the interaction, and try to bypass how you would usually react (e.g. by being overly defensive, immediately flaring up, etc.). Then, try and lead the entire situation in a more positive, less hostile direction.

Meanwhile, the Better Health Channels notes that you can try to find some common ground between you. What’s more, it’s vital to actively listen to the other side. Everyone wants to be heard; but often, we’re so busy trying to ‘win’ the conversation and have everyone’s attention on us that we forget it’s a discussion, not a monologue.

People’s opinions were split on the topic. Some thought that the author of the post did nothing wrong 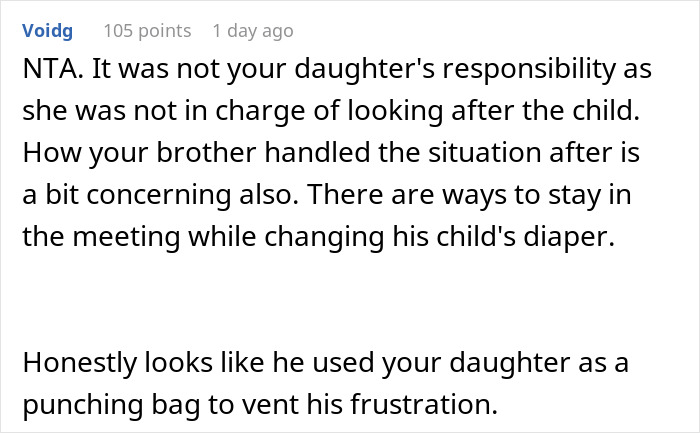 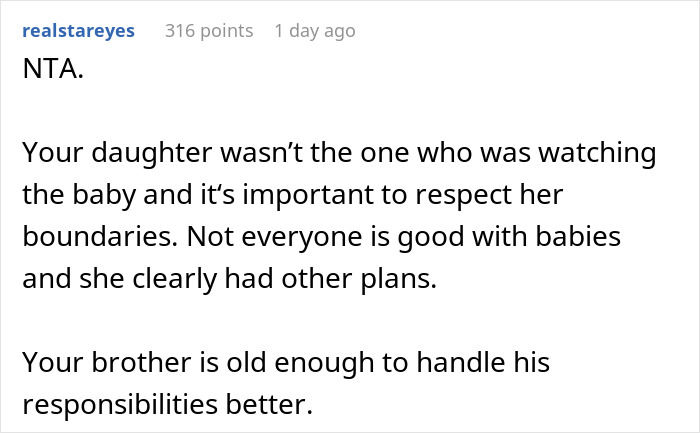 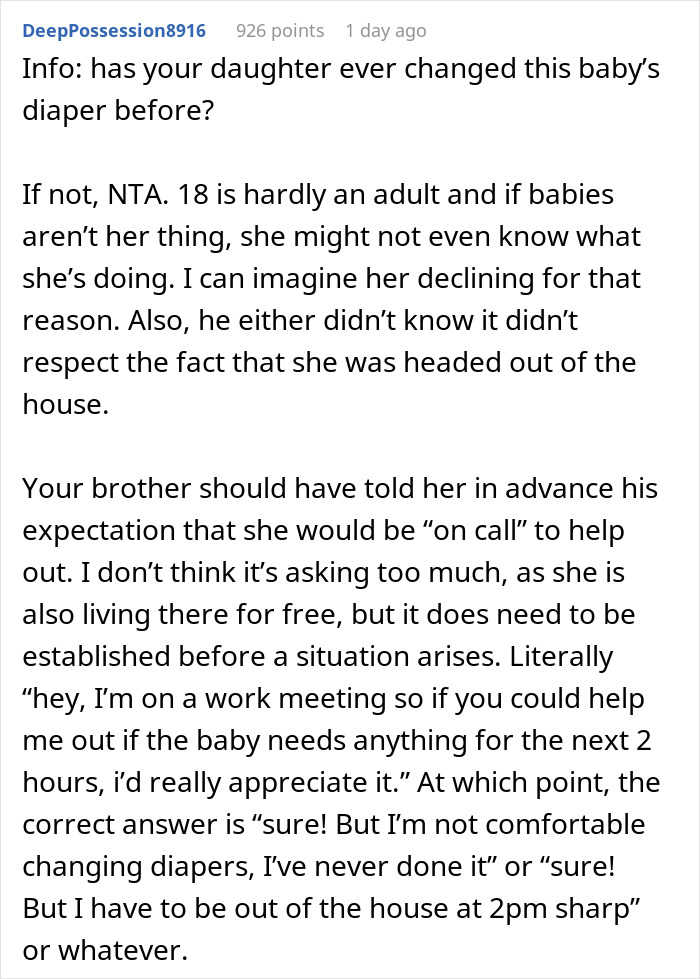 Other internet users, however, believed that the 18-year-old’s parent was to blame for the entire situation 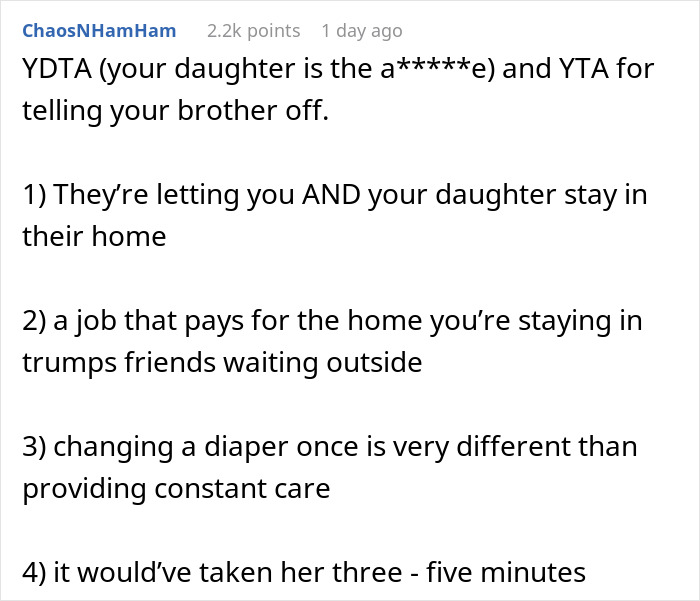 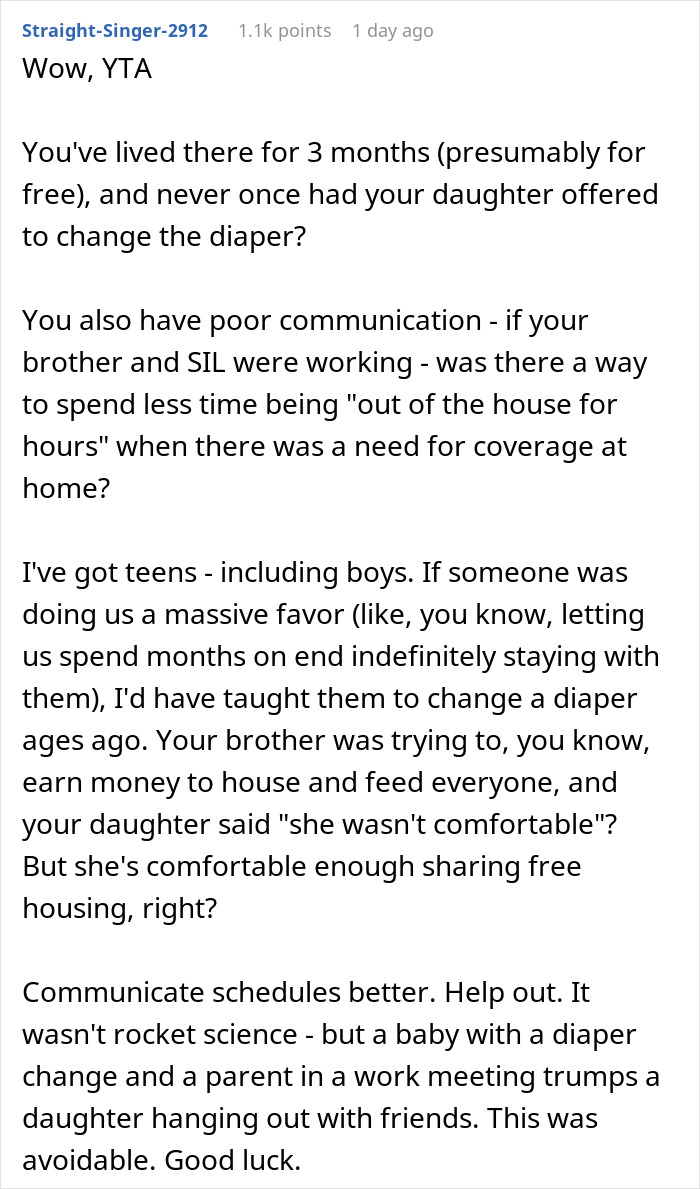 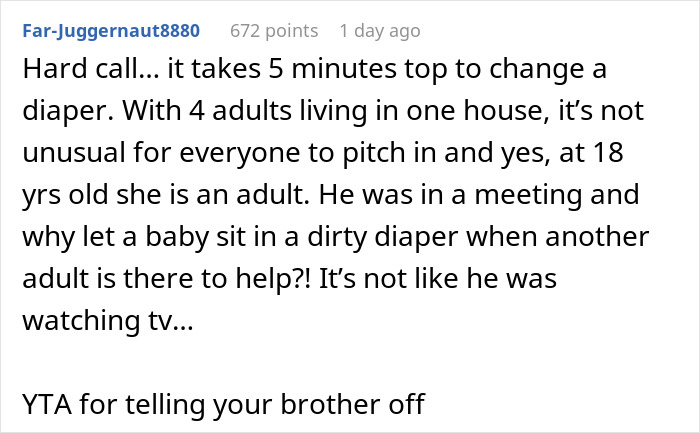 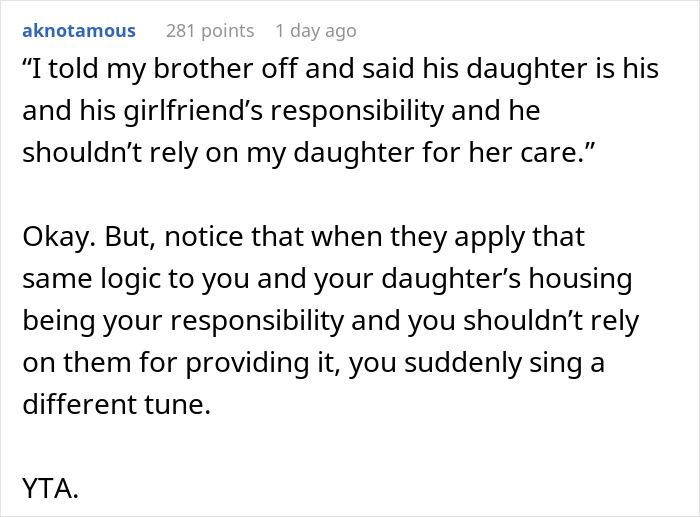 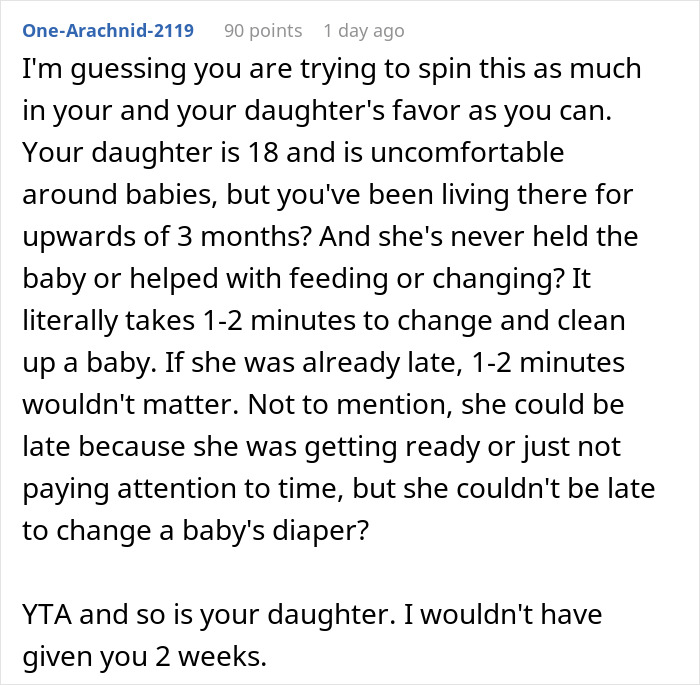 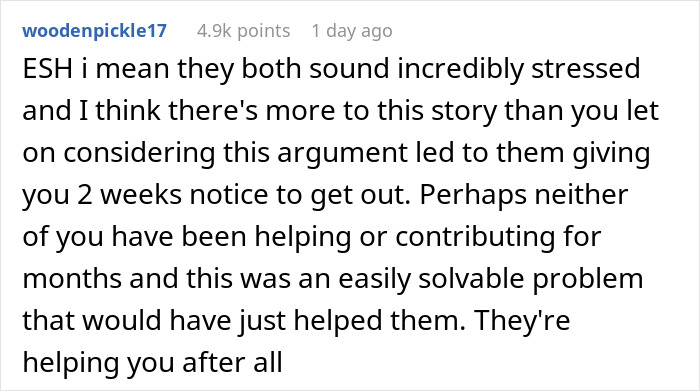 The post Person Asks If They Were Wrong To Take Daughter’s Side In Dirty Diaper Argument After They Got Kicked Out, Splits The Internet first appeared on Bored Panda.