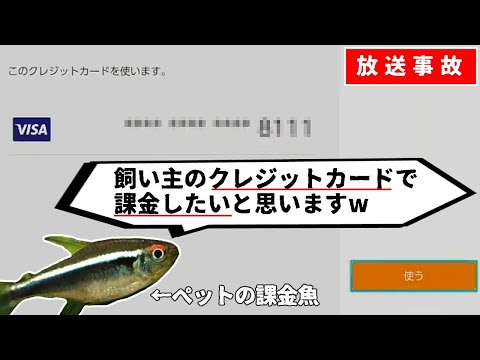 Japanese gamer and live streamer Mutekimaru has a great stunt going, but recently found out how wrong it could go. He has a popular series in which his pet fish play Pokémon. Yes, really. He installed a motion-tracking circuit board on the wall of his aquarium, divided into sections corresponding with keyboard commands. When a fish swims across a sensor, it trips a command of some sort. By activating random commands, the fish slowly play the game. Cool, huh? Maybe not so much. There’s danger in automating a live stream, no matter how cool it is, and you should never trust a fish.

Sunday, the fish were playing Pokémon Violet (and live streaming) when the game crashed. They kept swimming, got into the eshop (apparently, the computer was set to bypass the password), went into the wallet, and exposed Mutekimaru’s credit card information! The fish bought some items, sent Mutekimaru an email, logged back in and selected a different game, joined a chat group, and generally caused chaos along the lines of a six-year-old on his dad’s computer. Turn the closed captions on to get an English narration for the video. You have to wonder how long all this took before Mutekimaru caught on to what had happened, but it is hilarious. Mutekimaru has now suspended his fish play videos.  -via Metafilter