The customer is not always right. You can’t place the burden of responsibility just on the shoulders of the person who’s providing the service you’re paying for. Professionals—from every field—need information from their customers in order to do a good job; and they deserve at least a little bit of common courtesy and respect. Wedding photography is no different.

Wedding photographer Shayla Herrington explained in a viral video on TikTok how a few years ago she canceled on a bride-to-be the night before her ceremony. While that sounds like an awful thing to do on the surface right before their big day, in reality, there were very good reasons for Shayla to do this. And her TikTok followers completely agree with her.

Scroll down for the full story, Pandas. Let us know who you think is in the wrong here and what you would have done if you were in Shayla’s shoes. Meanwhile, if any of you are wedding photographers, we’d love to hear a bit about your job, the challenges you face, why you do it, and the toughest clients you’ve had to deal with.

Wedding photographer Shayla, from Arkansas, went viral after opening up about a weird situation that happened with a client some time ago 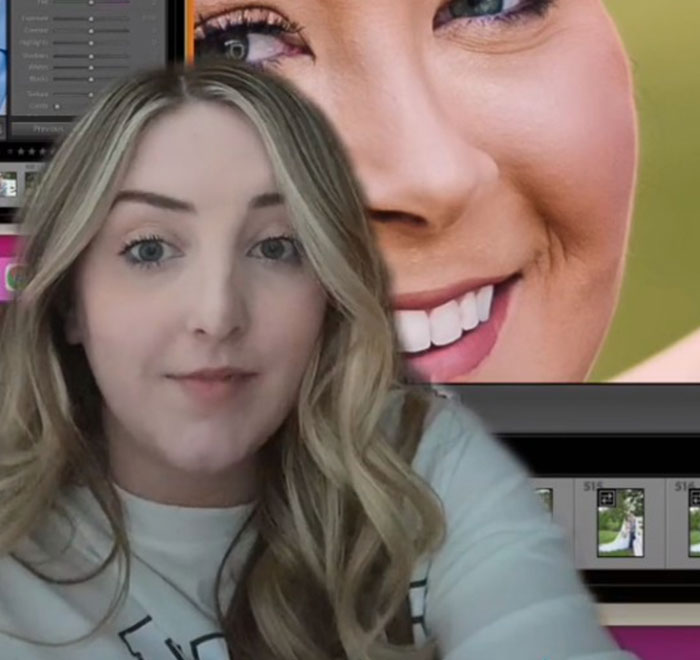 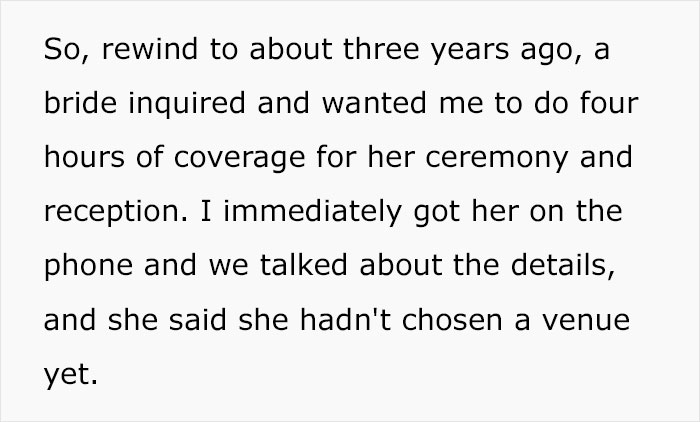 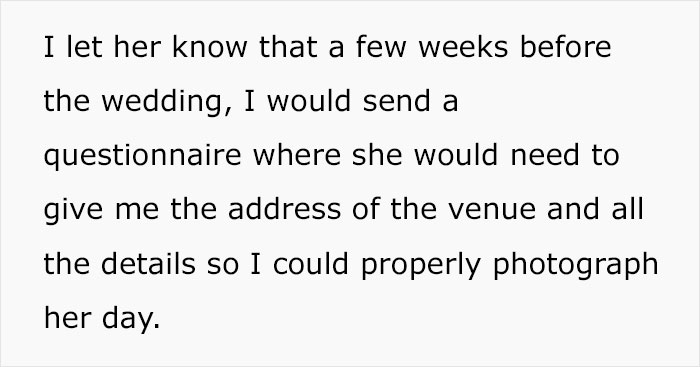 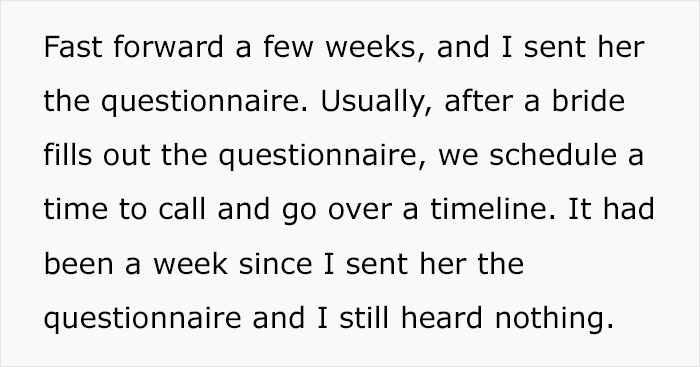 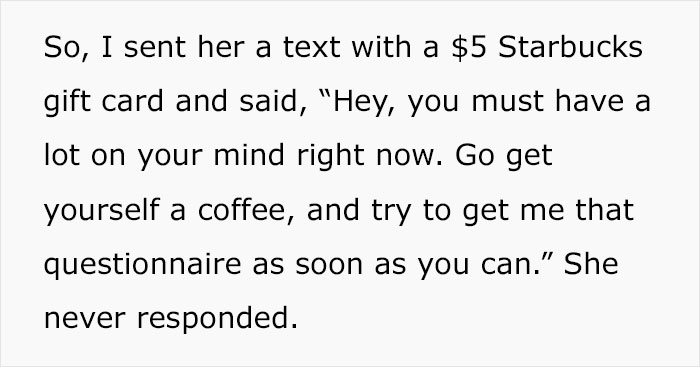 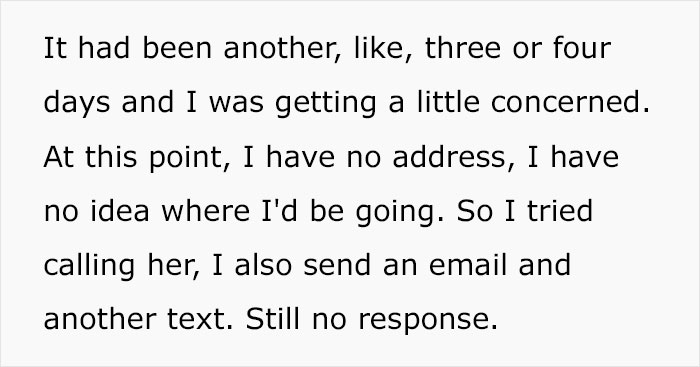 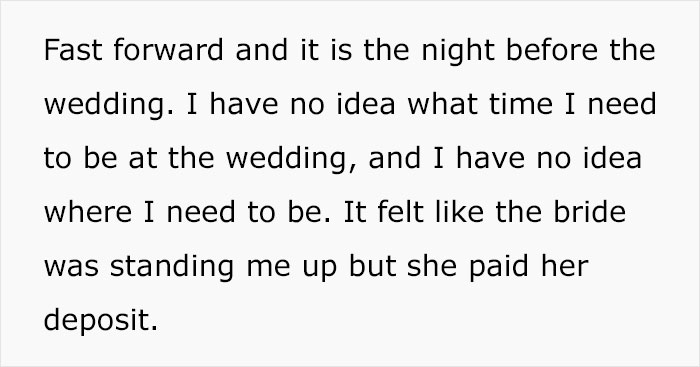 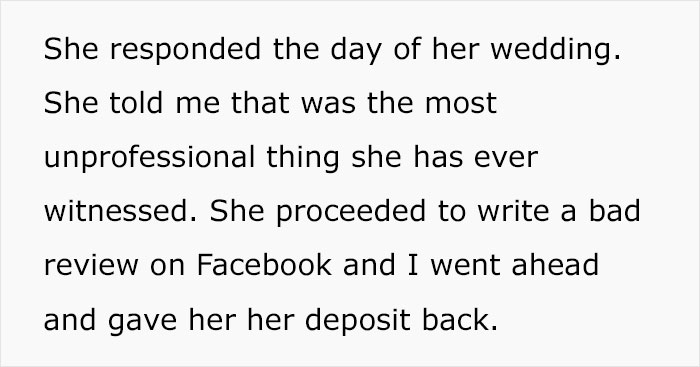 Here is the viral TikTok video in full

@shaylamherrington Was I in the wrong? Find the preset i used to edit in my bio! #weddingphotographer #weddings #weddingplanning #storytime #wedding #photographer #engaged #preset ♬ Monkeys Spinning Monkeys – Kevin MacLeod & Kevin The Monkey

Wedding photographer Shayla has 335.7k followers on TikTok, and her viral video netted her a jaw-dropping 307.4k likes, as well as 2.8 million views.

The photographer, from Northwest Arkansas, has a passion for capturing memories. However, that actually requires her clients to fill out her wedding questionnaire and at least try and pick up her calls and respond to her messages.

The challenging client paid the deposit without a problem, but after the initial phone call with Shayla, she completely ghosted the photographer. Shayla had no clue where the venue even was. And her best attempts to get in touch with the bride-to-be were completely fruitless.

Eventually, the pro realized that she’d have to cancel on the entire event. She did so the night before the ceremony and that was that. Only it wasn’t. The bride got in touch the day after the wedding, calling Shayla unprofessional and left a bad review on Facebook. The photographer then returned the deposit.

However, after hearing the entire story and learning the whole context, TikTokers far and wide supported the wedding photographer’s decision. After all, the client broke the rules of the agreement. And it’s just plain rude to completely ghost the person whose services you desperately want. Yes, organizing weddings is stressful. But wedding industry professionals deserve at least the minimum amount of respect from their clients.

“I booked her and sent her the questionnaire right after our first—and only—phone conversation. She understood I needed it within that week so I could properly do my job and know where I needed to be and what time I needed to be there,” Shayla told Newsweek.

On her website, Shayla notes that she sees her interactions with her clients as very important. She attributes her professional success to her ability to ‘click’ with the people she’s photographing.

“I photograph people the way they are and the interactions that happen between them. I am constantly on the lookout for a hidden smile, a knowing look, a private joke, acrobatic moves on the dance floor—any interaction that creates energy while telling a story,” she writes.

According to Shayla, her fascination with photography started in her teenage years, when she was 15. “My mother had just purchased a cheap camera to take with us on family vacations, and asked for my help figuring it out. I messed with the dials and had my best friend pose in front of the camera for me. A few hours later, I had learned the most basic functions, and had quite a few pictures of my friend,” she reveals.

“I remember when my friend went home that evening I got the camera back out and started taking pictures of anything and everything. It was like I couldn’t get photography out of my mind, and that’s still the case today. As my photography changed, so did I. Photography made me an adventurer, an entrepreneur, and an admirer of the world around me.”

Some time ago, photographer Dominic Sberna explained to Bored Panda why contracts are so important when working events. “A signed contract in this day and age is important, but it’s even more important to have everything upfront if either individual has any doubts. “Something a lot of people forget is that a verbal contract is also legally binding. So, it’s more about making everything transparent between each party involved,” he told us.

Meanwhile, Alexander Kjerulf, from Positive Sharing, told Bored Panda that the customer really isn’t always right. He shared some tips and tricks on what to do if you ever encounter someone rude while on the job, whatever industry you might be working in.

“Keep your cool and remember that whatever abuse they’re giving you is no reflection on you as a person. That customer doesn’t even know you, so there’s no way it could be. But on the other hand, don’t be subservient. Don’t be afraid to stand up for yourself and tell customers that abuse is not tolerated. And if it persists, hand them over to a manager as soon as you can and let them deal with it,” he explained.

“You have to remember that in many cases a customer who behaves badly is not necessarily a bad person—it can be a good person having a bad day and that’s why they’re acting out. But the sad truth is that some customers act this way because they’ve learned that it works and will get them discounts or preferential treatment.”

He added: “Whenever I’m a customer anywhere, I always try to be kind and positive to the staff—even when occasionally I have to complain about something. It’s literally the least I can do.”

TikTok showed the photographer a lot of love and support. Here’s what some users had to say about the whole situation

The post Photographer Shares How She Had To Cancel A Wedding Shoot The Night Before The Wedding first appeared on Bored Panda.