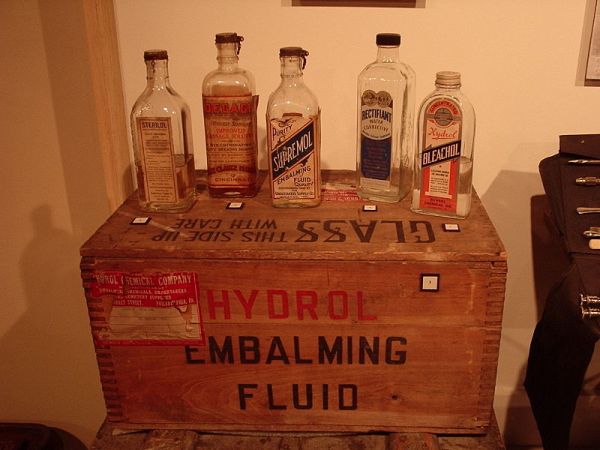 Ingesting embalming fluid is a horrible way to die. It’s not a death we worry about much these days, but back when funeral wakes were held at the family home, it was a different story. The undertaker would come and do his job at the house, then a wake would be held for days before the burial, often with plenty of drinking to drown the grief. Accidents happened, in an astonishing number of different ways.

EMBALMING FLUID IN THEIR BEER.

Mourners at a “Wake” Poisoned, One of Them Fatally.

While attending an Irish wake last night James Payton, James Callahan and Mrs. George Diven were poisoned by drinking embalming fluid. During the night refreshments were served, and beer was poured into a tumbler which contained embalming fluid left by the undertaker. Payton is not expected to recover. Daily Inter Ocean [Chicago IL] 6 October 1888: p. 9

Whether someone poisoned by embalming fluid survived depended on how much they drank. It didn’t take much to kill you. Just using a container that once held embalming fluid was often enough. You’d think people would be put off by the smell, but a child or someone who’d already drank quite a bit of alcohol might not. Honestly, look at the bottles it came in. Read a roundup of 19 different cases of poisoning by embalming fluid at Haunted Ohio. -via Strange Company