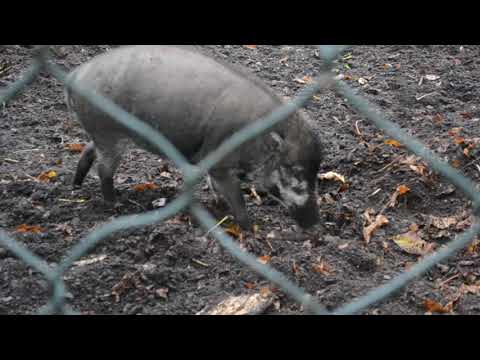 People are starting to get fascinated with pigs, and some – even celebrities like Miley Cyrus – treat them as pets. While the pigs that are usually kept as pets are different from the wild ones, their ability to adapt in their environment is undeniable, and ecologist Meredith Root-Bernstein noticed the same thing with a Visayan warty pig in Jardin des Plantes.

One of the Visayan warty pigs—a critically endangered species native to the Philippines—picked up a piece of bark in its mouth and started digging with it, pushing the soil around. “I said, Whoa, that’s pretty cool,” says Root-Bernstein, a visiting researcher at the Musée de l’Homme in Paris and a National Geographic Explorer. “When I looked up tool use in pigs, there was nothing.”

Root-Bernstein got curious so she started a study and visited more often to observe.

Though many wild species use tools, from chimpanzees to crows to dolphins, no one has reported the phenomenon in any pig, including the 17 wild pig species and domestic swine. This surprised Root-Bernstein, especially considering the Suidae family’s well-known intelligence.

But because wild pigs are so little studied and, in most cases, either endangered or critically endangered, it may not be so unusual that such innovation has escaped human eyes, says Root-Bernstein, whose study appeared in September in the journal Mammalian Biology.

Upon observation, one of the key things that their team noticed when it comes to the Visayan warty pig’s usage of tools is this:

The team noticed the animals—particularly the mama pig, Priscilla—would always use tools in the middle of the nest-building process. According to Root-Bernstein, this consistency in sequence, combined with the fact the pigs’ tools could physically move the soil, meets the scientific definition for tool use: “The exertion of control over a freely manipulable external object (the tool) with the goal of (1) altering the physical properties of another object, substance, surface or medium … via a dynamic mechanical interaction, or (2) mediating the flow of information.”

The scientists suspect that Priscilla may have learned how to use the tool herself, and passed on that knowledge to her mate and offspring.

Rating Pigs Are Smart and These Visayan Warty Pigs That Use Tools in Nest-Building Prove That is 5.0 / 5 Votes: 3
Please wait...
Loading...
Related articles