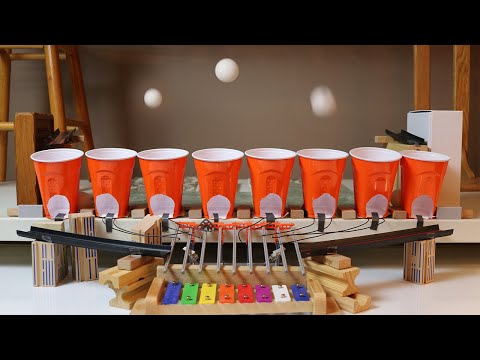 DoodleChaos used 213 ping pong balls to play the xylophone. The song is Jacques Offenbach’s “Galop Infernal” from the operetta Orpheus in the Underworld, which most of us call “the Can-can.” You can hear it better if you run the video at double speed (under settings). How the balls were tossed into the cups so precisely has me skeptical that there aren’t any video shenanigans going on here, but he says,

I underestimated how random ping pong ball bounces are. Even on a perfectly flat tile, there can be over a foot diameter where the final bounce ends up. My first design for this contraption included 3 bounces, but I ended up redesigning it to be more reliable. I’m thankful for this decision because it meant less time tracking the ball paths in Premiere. If you’re curious how I achieved this effect, I moved a mask to cover every single movement of every ball’s path by hand. Repeating and overlapping multiple layers became very complicated because the balls would cross paths. Once I learned tracks could be nested together I became more organized.

Well, that explains that. -via Digg