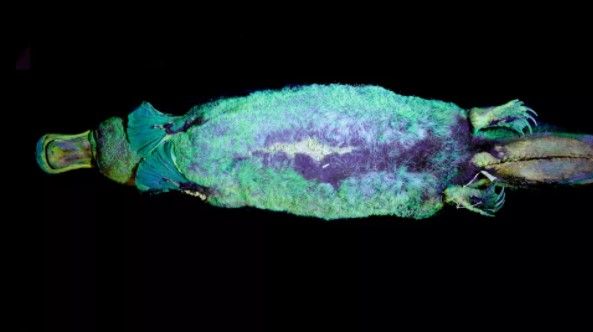 We know that platypuses are weird enough that even scientists are baffled by their existence, but can these egg-laying mammals get any weirder? It turns out they can. When scientists put platypuses under UV light, they discovered that these mammals glow green and blue.

Under visible light a platypus’s extremely dense fur — which insulates and protects them in cold water — is a drab brown, so the trippy glow revealed under UV light on a stuffed museum specimen was a big surprise.

Biofluorescence — absorbing and re-emitting light as a different color — is widespread in fish, amphibians, birds and reptiles. But the trait is much rarer in mammals, and this is the first evidence of biofluorescence in egg-laying mammals, also known as monotremes, scientists reported in a new study.

Learn more about why platypuses are strange over at Live Science.