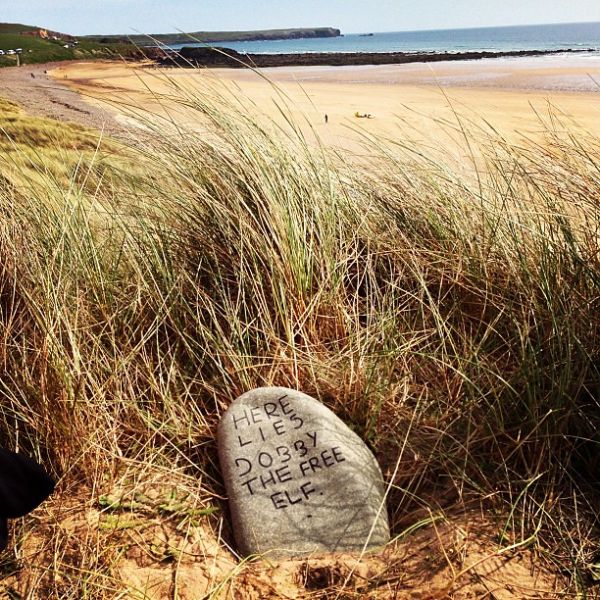 In the movie Harry Potter and the Deathly Hallows – Part 1, Dobby the house elf died in Harry’s arms on the beach. That heartbreaking scene was filmed at Freshwater West Beach in Pembrokeshire, Wales. Harry Potter fans came to the beach to pay their respects to the character, and someone erected a gravestone that says “Here lies Dobby, the free elf.” Over time, fans began leaving objects at the “grave,” mostly socks. Dobby was freed from his indentured servitude when he was given a sock, which he wore for the rest of his life.

After a consultation with the public, National Trust Cymru say Dobby’s grave can stay on Pembrokeshire’s Freshwater West. But they’re asking visitors to leave no trace after paint chips and socks have been damaging the natural environment here. pic.twitter.com/Ydea3WRmqr

However, Freshwater West Beach is part of a nature preserve, and the number of Dobby tributes started to get out of hand. National Trust Wales conducted an eight-month review of the site and decided that the shrine can stay, as long as it doesn’t grow any bigger. Fans have been asked to please stop leaving socks, painted rocks, and other objects which may damage the environment. They ask that fans “only take photos when visiting the memorial to help protect the wider landscape.”