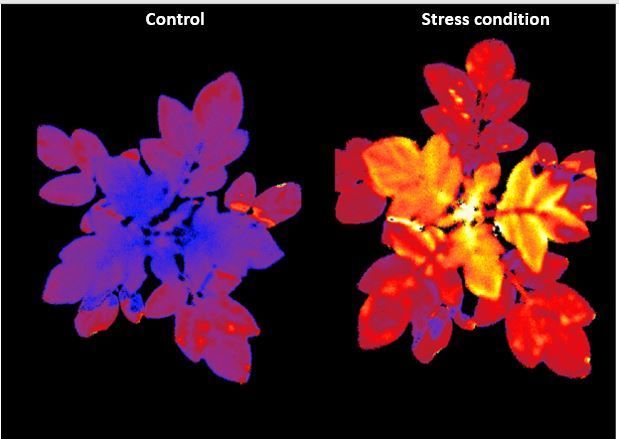 Plants, like humans, catch diseases. They also sometimes suffer from physical stress (due to lack of water, cold weather, lack of sunlight, etc.). But, unlike in humans, it is very difficult to identify sick and stressed plants. And, by the time that signs of disease or stress appear, it may already be too late to save the plant. This has been one of the challenges in farming.

In order to address this problem, scientists, led by Dr. Shilo Rosenwasser, have genetically modified a plant known as the Irish potato.

The researchers introduced a new gene into the plant’s chloroplasts, which are organelles (subcellular structures) that conduct photosynthesis. That gene expresses a fluorescent protein in response to the presence of reactive oxygen species – these are highly reactive chemical molecules that are produced in order to help mitigate stress, although they can also harm the plant if they build up in its cells.

Putting it simply, the more stress that a plant experiences, the greater the amount of reactive oxygen species it produces. In the case of the new potato, this in turn causes it to produce more of the fluorescent protein – so the more stressed the plant is, the brighter its fluorescent glow. And although the fluorescence can’t be seen by the naked eye, the scientists could detect it using a highly sensitive fluorescent camera.