According to Joseph Rowntree Foundation’s 2022 UK Poverty report, more than a fifth of its population (22%) are in poverty. That’s 14.5 million people.

Of the working-age adults, the report noted that lone parents are by far the most likely of any family type to be struggling with poverty.

To illustrate the issue, the BBC recently did a piece on one of them, Rebeccah, who works as a nurse in Leicester. In it, the woman explained that she simply cannot afford enough food for her three children and herself, so she sometimes goes without.

Rebeccah said the rising cost of living has pushed her close to breaking point, but she is trying to find ways to cope, including accepting donated groceries from neighbors.

But Kevin Edger, a man from London, who calls himself a conservative and a political enthusiast, thinks Rebeccah and those alike can solve everything by eating plain pasta.

A few days ago, a conservative political enthusiast from London, England, said struggling families should just live on plain pasta 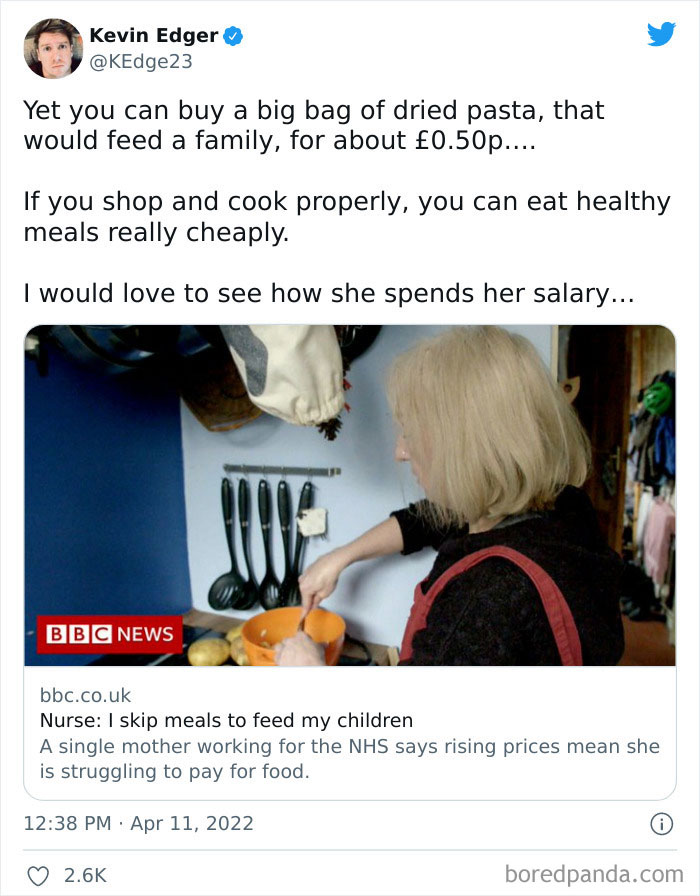 But writer Jack Monroe, who is also known for campaigning against poverty, broke down this claim to show how absurd it actually is 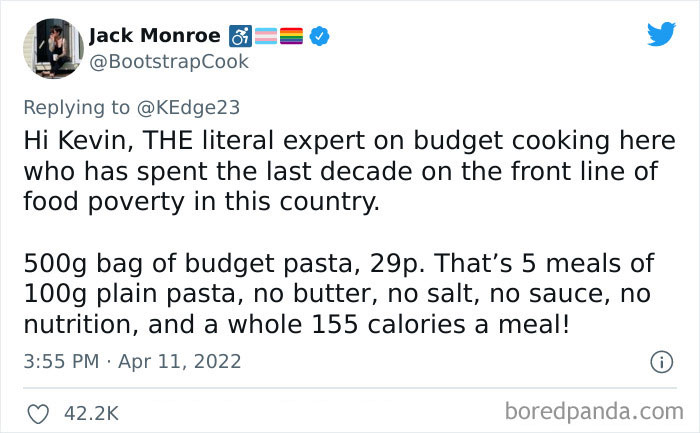 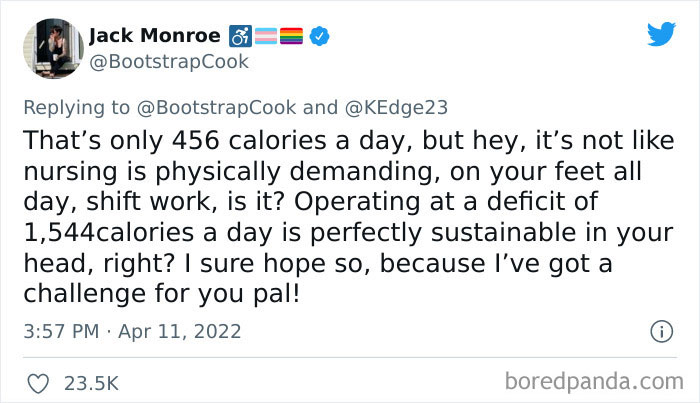 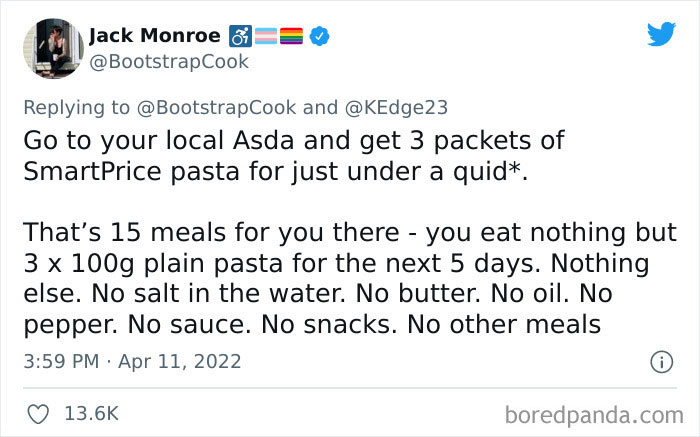 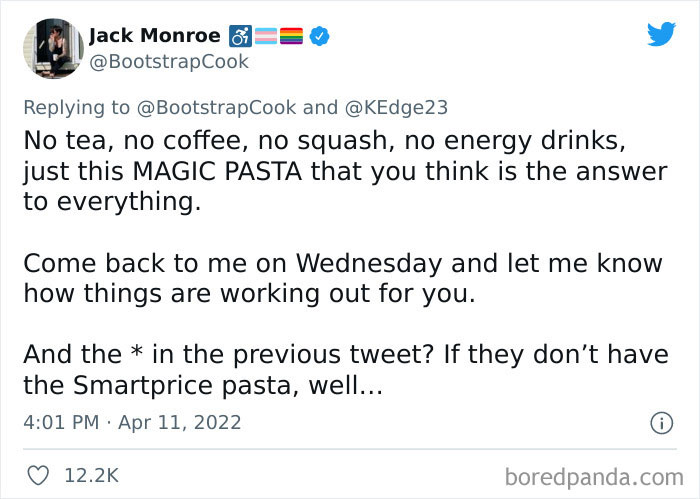 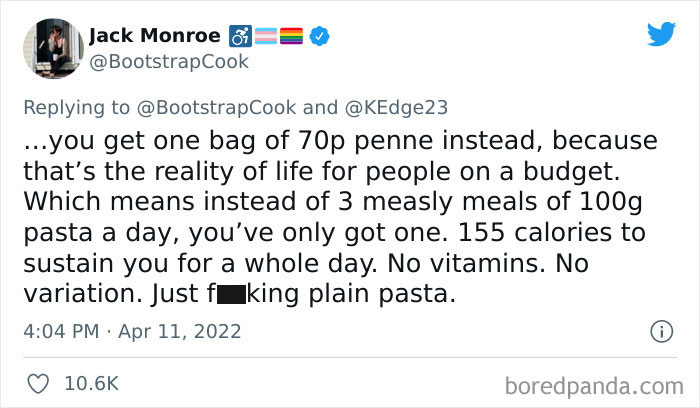 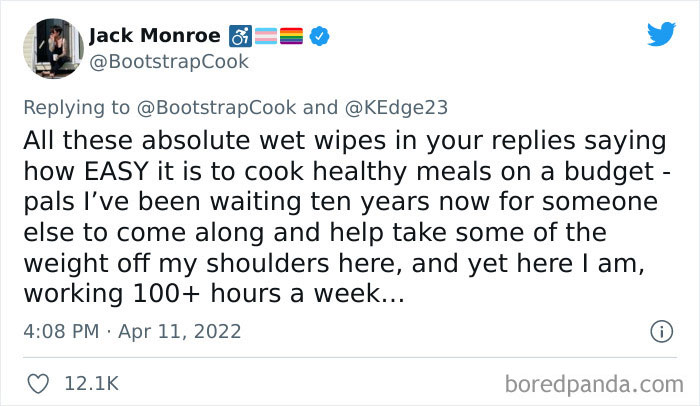 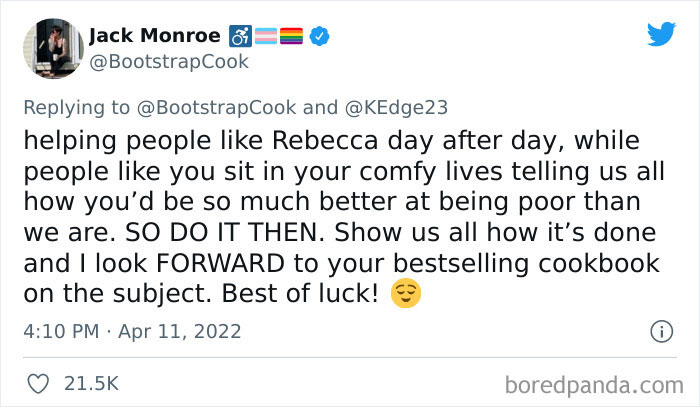 The before-mentioned Joseph Rowntree Foundation report also noted that families with 3 or more children are almost twice as likely to be poor as one- or two-child families (47% compared with 24%).

This means around 1 in 4 children in one- or two-children families are in poverty, compared with almost 1 in 2 children in families like Rebeccah’s, with 3 or more children.

So far, it’s likely that the poverty rates for larger families will continue to increase. These households have a higher proportion of their incomes made up of benefits (despite increasing employment rates for such families in recent years), so are disproportionately more sensitive to political decisions, such as the past benefits freeze or the recent cut in Universal Credit for workless families.

Such families are also disproportionately affected by the benefits cap. Beyond this though, looking at the latest data, the report concluded there’s no visible effect of the two-child limit policy which explicitly targets these families. This has withdrawn means-tested support from third and subsequent children born since April 2017. The data also reveals that over half of families containing three or more children have their youngest child born before this date so are unaffected. As time goes on, more and more families will be affected.

And people couldn’t agree with her more 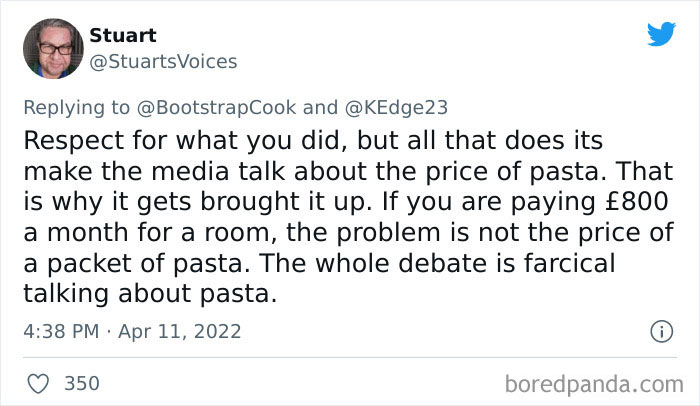 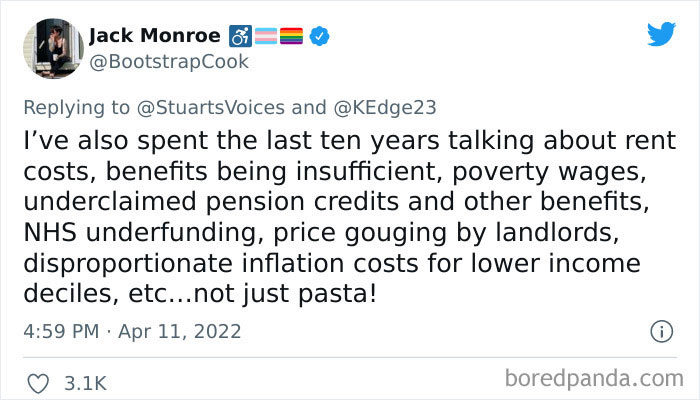 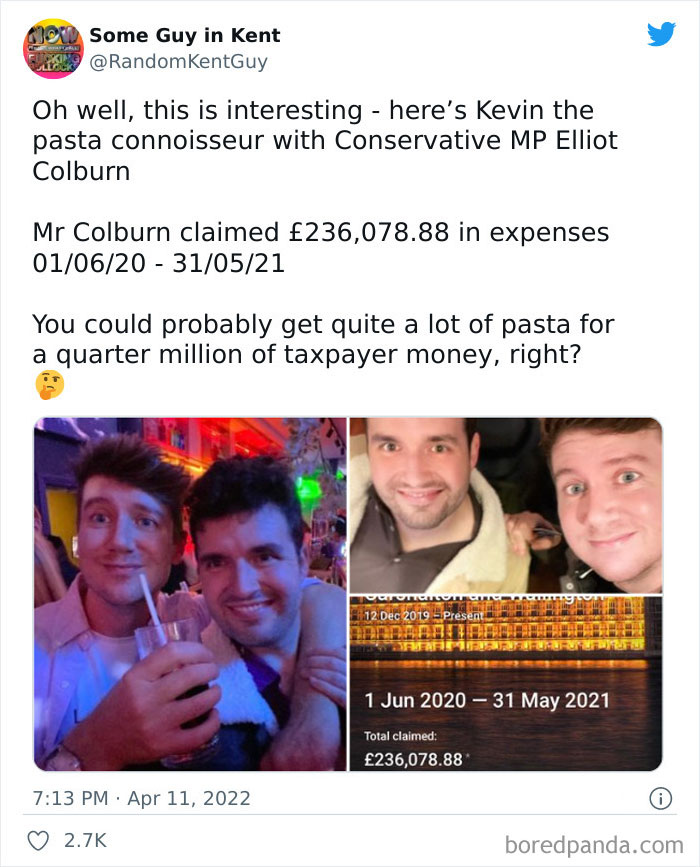 Another very concerning thing is that 2.9 million individuals in poverty in the UK have a low or very low food security status, meaning they are unable to access enough, varied, and/or nutritious quality food. So basically, 1 in 5 (20%) individuals living in poverty are eating plain pasta. Or an equivalent of it.

To get a better understanding of this 20%, consider this: only 4% of individuals who are not in poverty have a low or very low food security status, highlighting the strong relationship between food insecurity and poverty. 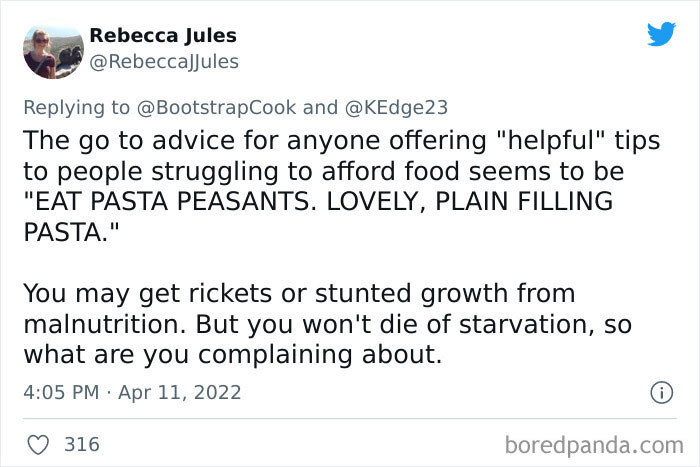 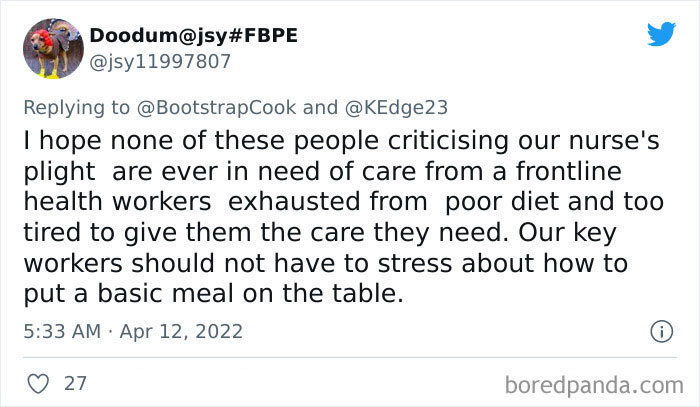 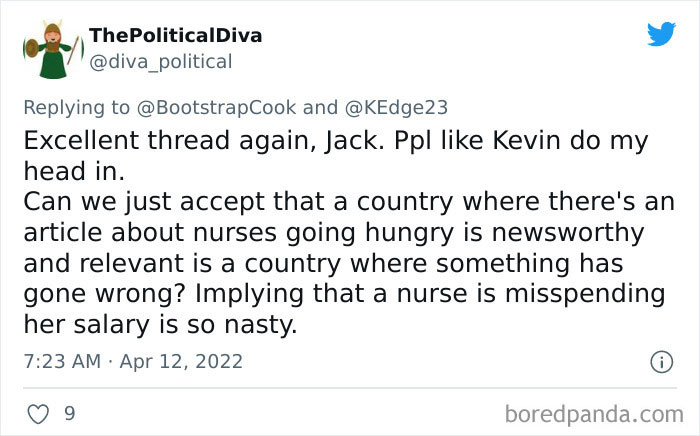 The key takeaway from these numbers is that unless people receive sufficient income they will simply continue to struggle to have access to good quality and quantity of food.

According to Joseph Rowntree Foundation, the Covid-19 pandemic has recently threatened the food security of millions of people even further. “Reduced incomes, increased unemployment and higher food prices have greatly reduced access to food for those affected,” it said. “There are actually key design features of the social security system that directly lead to higher food insecurity and have contributed to the rise in food bank use. Having to wait five weeks for the first Universal Credit (UC) payment, low Local Housing Allowance (LHA) rates and LHA caps relative to housing costs, the ‘bedroom tax’, and the structure and process of the Personal Independence Payment (PIP) assessment are all factor.”

Now the £20 uplift has been withdrawn, many more people will be struggling to buy food for their families, especially if they live in workless households. As the economic fallout following Covid-19 takes time to resolve and people’s resources continue to be eroded by the high cost of living, greater numbers are likely to be food insecure and end up needing to use food banks to survive. 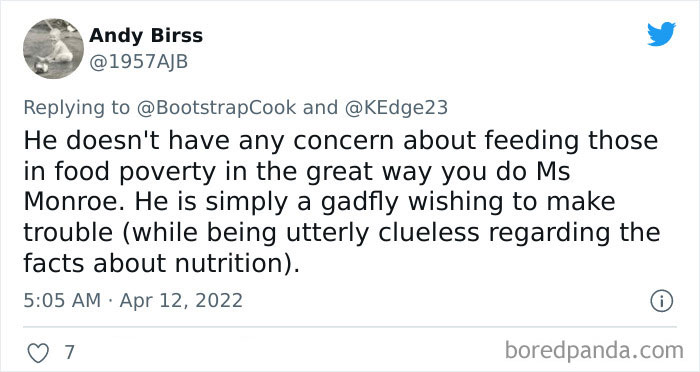 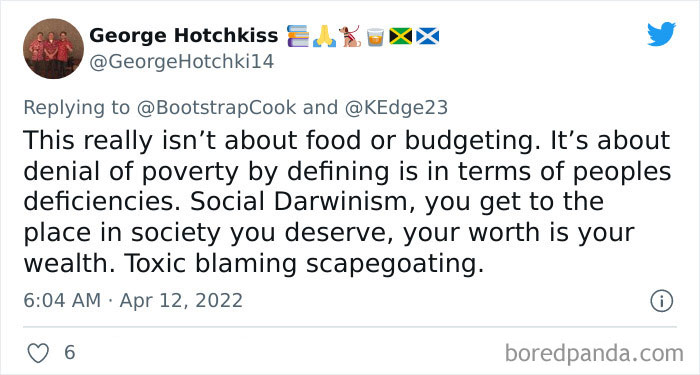 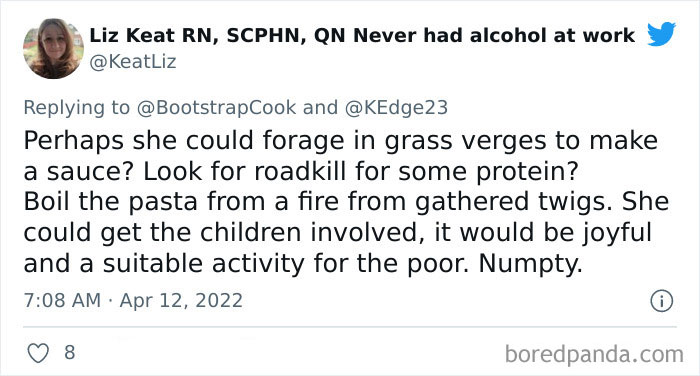 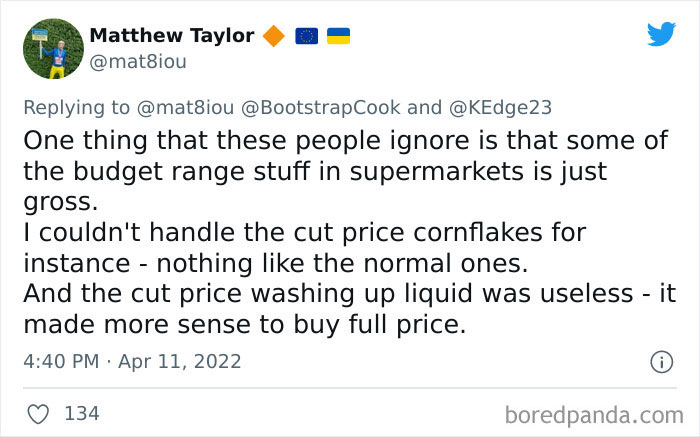 Some even shared their own personal struggles 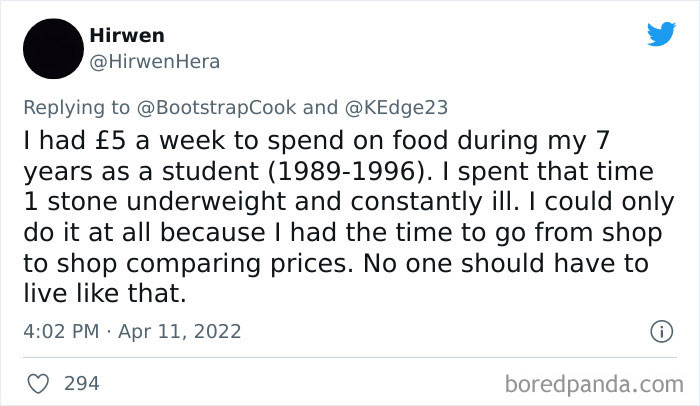 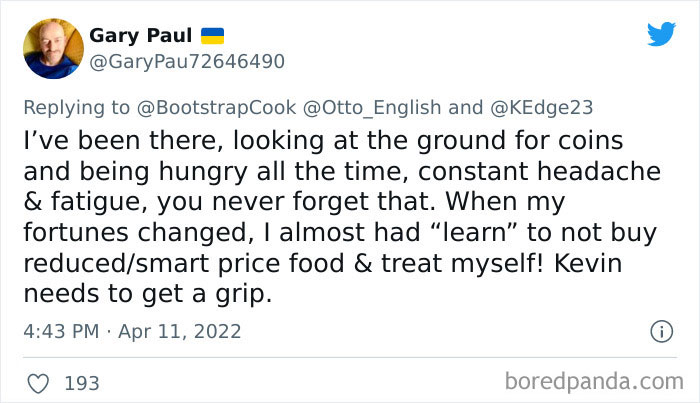 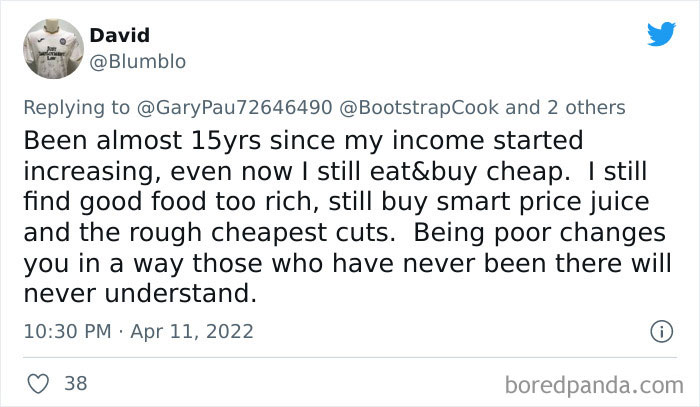 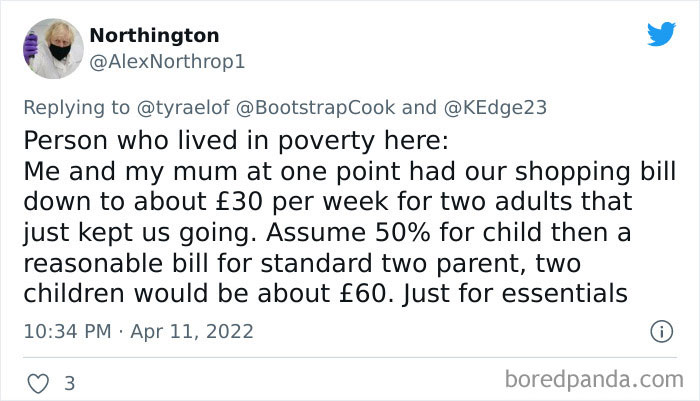 The post Poverty Activist Has The Best Possible Response To An Ignorant Tweet Saying Poor People Can Survive On Plain Pasta first appeared on Bored Panda.