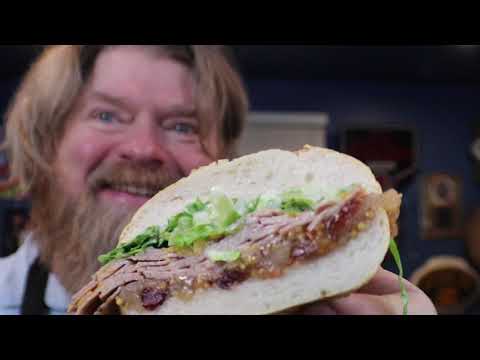 Jim Behymer knows sandwiches. He runs a site called Sandwich Tribunal and he makes his own bologna. Behymer saw a meme referencing pumpkin spice bologna, which does not exist -or it didn’t until he made some.

First I want to say this: pumpkin spice bologna is delicious. It works way better than you think it should, way better than our calcified tastes want it to. It’s fatty meat, cured and spiced, and what’s so wrong about that?

Also let us firmly state the obvious: that pumpkin spice bologna is a stupid idea, it should not exist, and I was an idiot to make it, must less make this video about it.

Watching Behymer grind the spices and meat and make pumpkin spice bologna is quite pleasant -and I would imagine certainly more pleasant than watching a commercial meat processor do it. He makes a sandwich with pumpkin spice bologna and another with his homemade pumpkin spice mortadella. Even if you would never be inclined to eat such a thing (my only objection is the use of white bread), you’ll enjoy seeing it because of Behymer’s attention to detail and his obvious appreciation of a well-made sandwich. Get his recipe for pumpkin spice bologna here. -via Metafilter