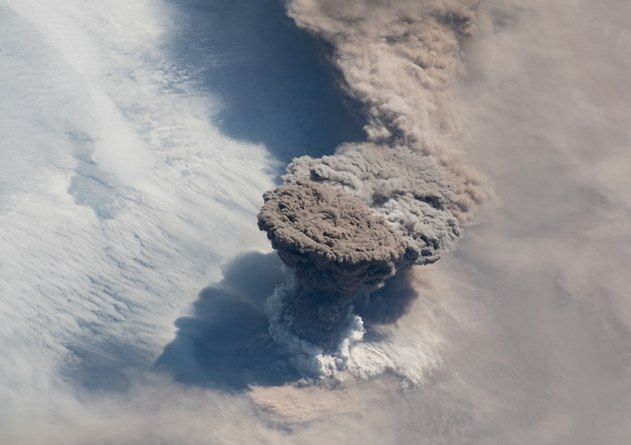 NASA just recently took photos of Raikoke volcano’s eruption and seen from above, the phenomenon looks stunning. The satellite photo shows a plume of grayish brown smoke rising above the sea of clouds and those taken by astronauts from space show a streak of brown amidst converging clouds and wind patterns.

On June 22nd, 2019, the Raikoke Volcano on Russia’s Kuril Islands, which last exploded in 1924, suddenly let out a giant plume of ash and gas from its 700-meter crater. Astronauts were able to take pics of the narrow column of the plume as it rose and expanded over an area called the umbrella region.

Volcanic Ash Advisory Centers in Tokyo and Anchorage reported that the ash had reached as high as 13 kilometers (8 miles). Data from the CALIPSO satellite shows that some segments of the plume reached the altitude of 17 kilometers (10 miles).