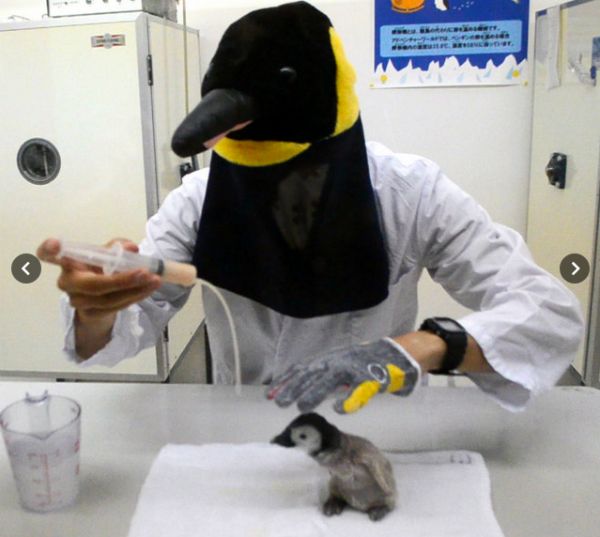 Adventure World is an aquarium in Shirahama, Wakayama Prefecture, Japan. They have an emperor penguin breeding program, in which baby penguin chicks are fed and cared for by staff in penguin costumes. It’s not a social media stunt; but rather an attempt to keep the chicks from imprinting on humans.

Birds view the first moving things that they see as their parents. The aquarium found that the emperor penguin chicks that recognized humans as their parents do not mate after growing to adulthood, effectively ending the desired breeding cycle of penguins at the aquarium.

To raise the latest chick, staff members wore a penguin-shaped mask and a special left-handed glove resembling the head of a parent penguin.

Without saying a word, they fed the chick liquid food comprising mashed herring and krill five times a day with the chirping of the parent birds playing in the background.

The newborn chicks are cared for by humans for only a short time, then they are returned to their penguin parents. The staff hopes that the penguin disguises will enable the chicks to bond with their parents easier, and grow up to socialize better with other penguins, including mating. Read about the program at the Asashi Shimbun. -via Nag on the Lake