There had never been a set of surviving elephant twins born in the US. But two weeks ago, at the Rosamond Gifford Zoo in Syracuse, New York, an Asian elephant named Mali gave birth to two male elephants, who are thriving well enough to announce the miracle event. Mali produced the first baby elephant at 2 AM on October 24th. That calf was 220 pounds and appeared to be healthy. Then at almost noon, zoo staff were stunned when she had another calf, which weighed 237 pounds and was noticeably weak. They didn’t know that Mali had been carrying twins. 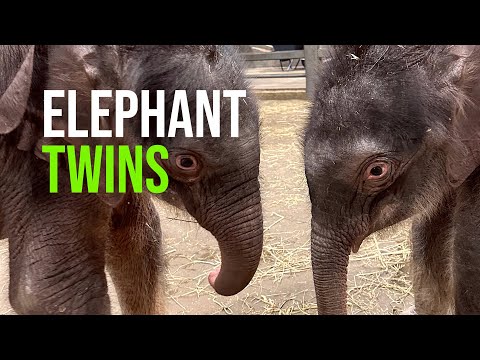 Mali is taking good care of the twins, although zoo staff is supplementing the second calf with elephant formula. Their prognosis is good at this time. Mali’s placenta was taken to a research lab in order to study EEHV, a herpes virus endemic to elephants that is a leading cause of death in young pachyderms. Mali lost two earlier offspring to the disease in 2020. -via ZooBorns