The last time Art in America devoted an issue to the subject of realism was nearly forty years ago, in the midst of a recession, on the cusp of the Reagan revolution, and at a time when art publications were filled with speculation about postmodernism. Photorealists and figurative painters aligned with feminist politics had taken up the realist mantle. So what, exactly, did that portend?

In her essay for A.i.A.’s September 1981 issue, Linda Nochlin argued that the foundational avant-garde movement of the nineteenth century had left a suspiciously ambiguous legacy in the twentieth. Realism was tied to both revolutionary politics and a conservative “return to order,” to the unruly social commentary of Germany’s Neue Sachlichkeit and to the authoritarian perversions of fascist art, to the heroic dynamism of Mexican Muralists and to the rigid certitude of Soviet Socialist Realism. Realism had spawned a variety of lowercase realisms, their aims often in conflict and their meanings always local and highly context-dependent. “Modernism is no longer necessarily synonymous with any sort of revolutionary thrust, though it still has that capacity,” Elizabeth Baker wrote in her editorial, and “realism is no longer necessarily synonymous with a reactionary attitude, though it still has that potential.” Realism was prototypically postmodern: both avant-garde and kitsch.

The forms and mediums may have changed, but contemporary realism remains pluralistic and contentious. While realistic painting can still denote the backward-looking impulse to make art great again, today a cadre of Black and Latinx artists are driving a resurgence of figurative painting. Rachel Wetzler discusses the work of Jordan Casteel and Aliza Nisenbaum, two of the most prominent artists working in this mode. Beyond the gallery, contemporary painting has become a vital force within the culture at large. Amy Sherald’s portrait of Michelle Obama is a global phenomenon, and Time magazine recently turned to Titus Kaphar to create an iconic image of mourning for George Floyd. At a moment when there is widespread attention on racial inequities in the United States, figurative artists like these are representing people who have long been excluded from the canon. If oil painting is old-fashioned, that’s exactly the point: the choice of medium is part of an argument about who can be represented in the most time-honored fashion. Artists are making an argument about history using other mediums as well. As Wetzler writes, Casteel and Nisenbaum, like their photographer and filmmaker peers, are recording the profound transformation of labor conditions in the twenty-first century. Through its many revivals and in its many guises, realism appears most vital during periods of social change. 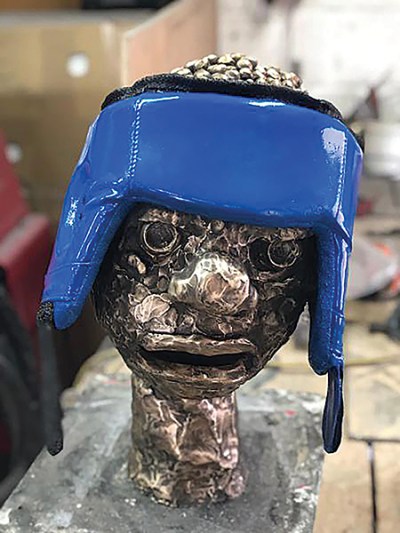 Rather than striving for a comprehensive overview, this issue offers multiplicity, tracing a realist impulse through performance, sculpture, and cinema. The work we’ve chosen to highlight embodies an impulse to narrate histories of struggle, ennoble quotidian experiences, and project a better future without lapsing into idealism. Many of these aims are evident in the work of Clotilde Jiménez, who has contributed a print and portfolio to this issue. His collages, paintings, and sculptures featuring boxers and bodybuilders offer complex portrayals of Black masculinity. As objects and as images, his work remains grounded in the rich experience of everyday life.