People who have ever needed to work in shifts know how frustrating it is when the person that has to come in your place is either late, or worse, doesn’t show up at all. Working in shifts means you have to be considerate of others and be punctual as well as warn the managers if you aren’t able to make it to work as it is showing respect to your coworkers.

Unfortunately, that’s not always the case. Like for redditor DiamondUnlucky, who was waiting for a person to come and replace them but nobody showed up. So they just left after locking what could be locked and asking the police to keep an eye on the gas station they worked at. 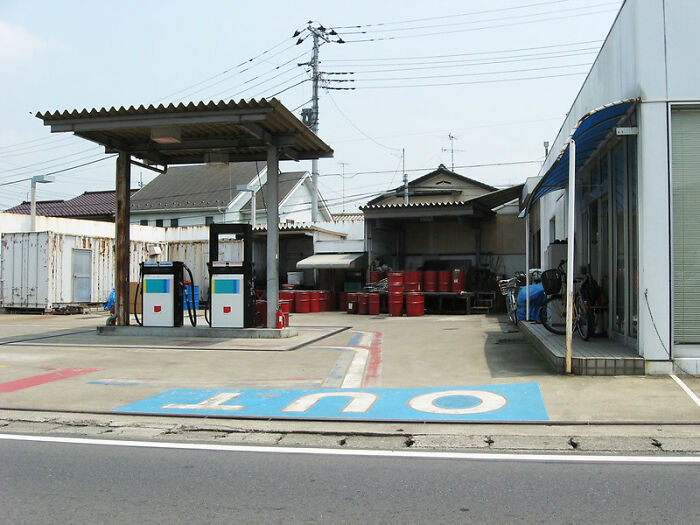 The Original Poster (OP) works at a gas station that is open overnight. The Redditor wrote that lately other employees would just not show up to their shifts and wouldn’t warn the managers or their coworkers.

It was just a matter of time until it would happen the day DiamondUnlucky worked. They had a shift from 2 PM until 10 PM and 15 minutes after their shift ended, nobody had showed up in their place, so they had to report to the manager.

The employee was waiting for 15 minutes after their shift ended and called the manager to tell her that nobody showed up, but the manager was sleeping 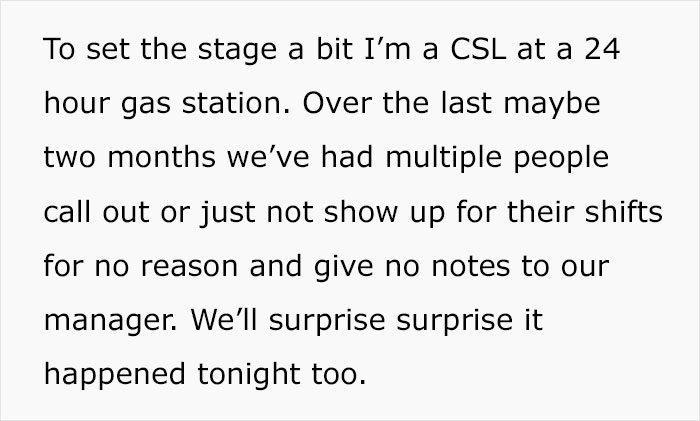 The problem was that the manager was sleeping, as her husband who picked up the phone informed the OP. The husband promised to try and wake the manager up but he never called back.

The employee thought they could call other coworkers to see if they could come in while waiting for the manager’s husband’s call. But none of the other employees were available and some didn’t even pick up.

The other times an employee wouldn’t show up, the manager would come to the store and close it, but this time she was not in the condition to even wake up. 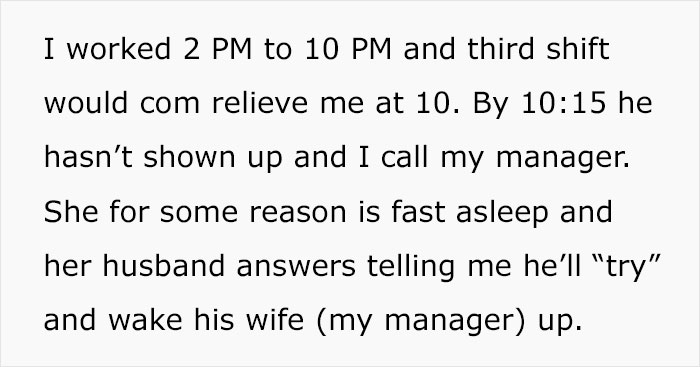 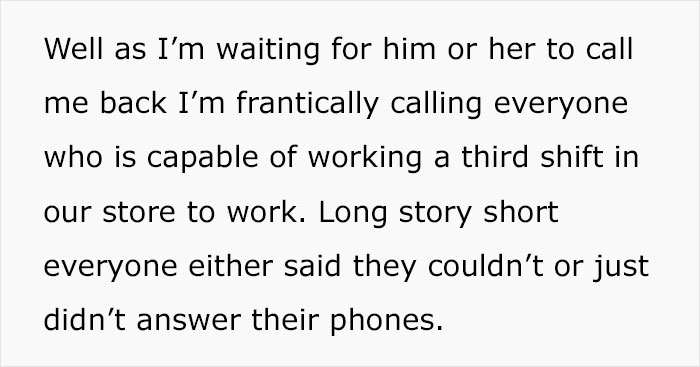 For almost an hour, the OP tried to somehow fix the problem and not leave the gas station alone because they didn’t have the key to lock it as the manager was the only one who had it. So DiamondUnlucky locked the doors they could, called the sheriff’s department to ask if they could keep someone close to watch the station, and left because the only other option would be to cover the shift, work for 16 hours then come back home to only get back to work the same day.

The OP decided to lock the doors they had keys to, call the police to ask to watch over the store, and left 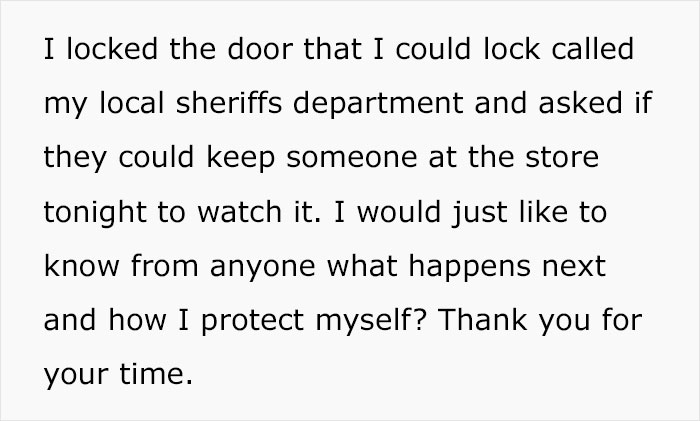 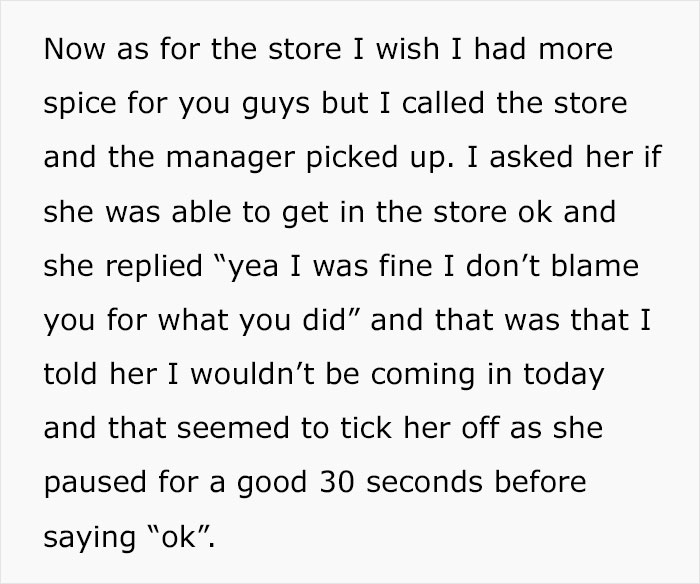 The next day, the store was fine, but the manager asked the employee to not talk about what happened with anyone

The next day, the Redditor called the manager to ask if the gas station was ‘alright and she said that it was fine and that she wasn’t mad that the employee left it unattended. Then the employee said that they would not be coming to their scheduled shift that day and felt that the manager was not happy about that.

In the comments, the OP said that this job that paid only $11 an hour was more of a burden than a means to survive and if the manager wanted to fire them, it would actually be a relief. But they are not sure if they can get fired for that as the manager asked to not talk about that night with anyone as it would get them in trouble. 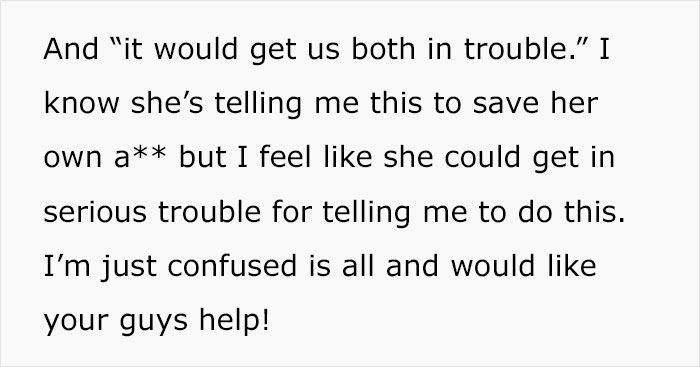 What would you have done if you were in the OP’s situation? Do you think there was more they could have done or do you think it was not their responsibility even if the store got robbed? We would like to hear your reactions to this story so leave them in the comments! 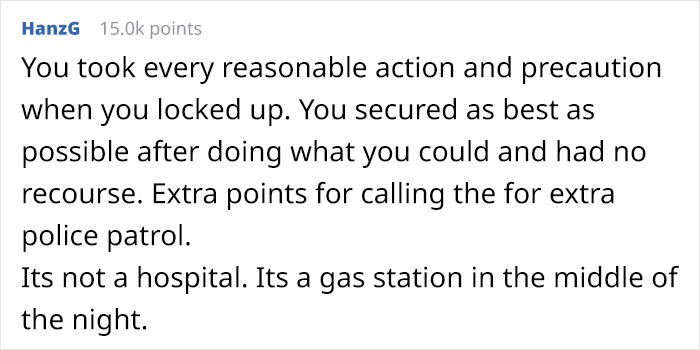 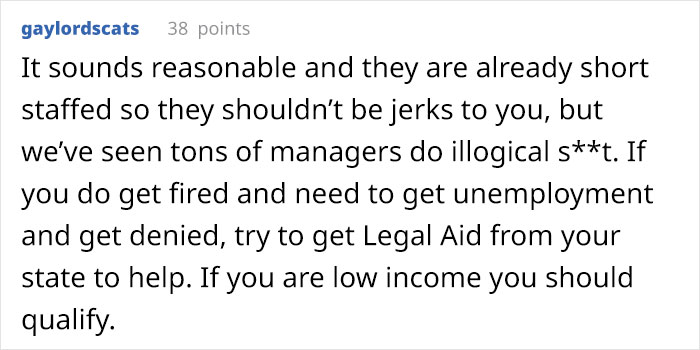 The post Realizing That Nobody Will Come To The Night Shift, This Employee Has To Leave The Store Unattended As The Manager Won’t Respond first appeared on Bored Panda.