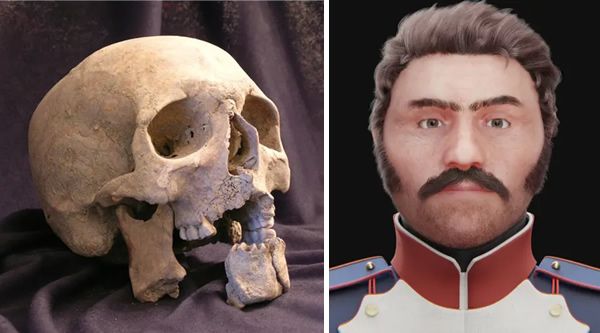 When a French-Russian archeology team discovered the skull of a French soldier, they noticed the horrific saber wound that split the man’s jaw and knocked out most of his teeth.

The soldier, part of Napoleon’s army that attacked Russia in 1812, was buried in a mass grave in Kaliningrad. Now, a team of scientists have reconstructed the face of the anonymous soldier:

From his skeleton, it was clear to the scientists that the soldier was male and most likely between the ages of 24 and 27 when he died, with thigh bones that indicated he rode a horse regularly. The blow that split his jaw had knocked out most of his teeth, aside from a few molars, and the team concluded he had probably been chopped by the middle of the blade, not stabbed by the tip, of a saber wielded by the right hand of someone else charging at him on horseback.

The reconstruction gives scientists insight into the lives of soldiers living in the 18th century. Interestingly, the gruesome saber wound to his face actually didn’t kill him … Learn what did and read all about the solider and his facial reconstruction over in this article over at BuzzFeed News.