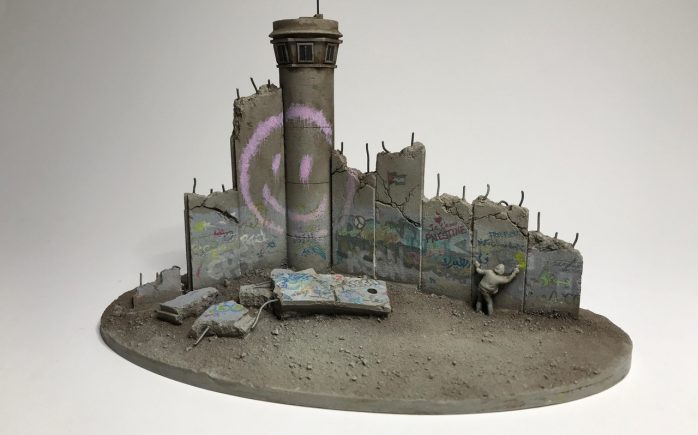 The Walled Off Hotel in Palestine recently announced a couple things that may be of interest to the fans of Banksy. Available in person only, but listed on their online gift shop for your perusal, are new Defeated souvenir wall sections. Each limited edition piece from the elusive British artist imagines a time in the future when the Israeli West Bank barrier no longer ceases to function and becomes a relic covered with graffiti.

“Just in case you weren’t sure what Banksy thinks about the wall (not a fan) his latest range of ‘souvenir collectables’ anticipate the day the concrete menace has been defeated and feral youth scribble on its skeletal remains. For those of you concerned that making glorified tourist tat from military oppression is ethically dubious – there is at least the solace that each wall is lovingly hand painted by craftspeople in the local area.”

The hotel also released music (to coincide with the Palestine Music Expo, taking place in Ramallah this week) from a Creative Retreat it hosted in February of this year. Produced by Block9 and led by Brian Eno, The Black Madonna and Moloko lead singer Roisin Murphy all participated creating the seven track album, all drawing inspiration from Palestine’s history and its people. It’s available for free on Soundcloud.

Brian Eno commented “I felt lucky to be part of the Creative Retreat at the Walled Off Hotel, it represented the meeting of some unusual musical minds, delighting in each others differences. In a world where difference is increasingly seen as threatening, this is liberating. Anything we can do from our position of privilege in the West to lift the Palestinian cause feels like a good thing to do. Beauty is the best revenge.”

Block9 co-founder Steve Gallagher added: “The collection of music is political, inasmuch as it encourages people to take action and participate in the world, as opposed to being a passive bystander. It’s about taking some action. Engage.”