To the robot who turned 90 days into 15 years of exploration:

You were, and are, the Opportunity of a lifetime.

In 2003, NASA Launched two Mars rovers, Spirit and Opportunity, only three weeks apart. Both rovers landed in 2004, and both were expected to relay data and images back to earth for 90 days. But the little rovers surprised everyone, and continued working far beyond their expected lifespans. Spirit became stuck in the soft soil in 2009, but continued its mission of geologic analysis and communications for another year. In 2011, NASA declared its mission over. The Opportunity rover continued working for a record 14 years, and was the robot that discovered evidence of water on Mars. But today NASA has announced its mission has ended.

The cause was system failure precipitated by power loss during a catastrophic, planetwide dust storm that engulfed the Mars rover last summer.

“It’s going to be very sad to say goodbye,” said John Callas, the mission’s project manager. “But at the same time, we’ve got to remember this has been 15 years of incredible adventure.”

Opportunity’s mission was planned to last just 90 days, but it worked for 5,000 Martian “sols” (which are about 39 minutes longer than an Earth day) and traversed more than 28 treacherous miles — two records for NASA.

“It will be a very long time,” Callas predicted, “before any other mission exceeds that duration or distance on the surface of another world.”

Read the history of the Mars Opportunity rover at The Washington Post.

Discover magazine has eulogies for Opportunity from a variety of scientists.

The New York Times has an interactive look at Opportunity’s work on Mars. 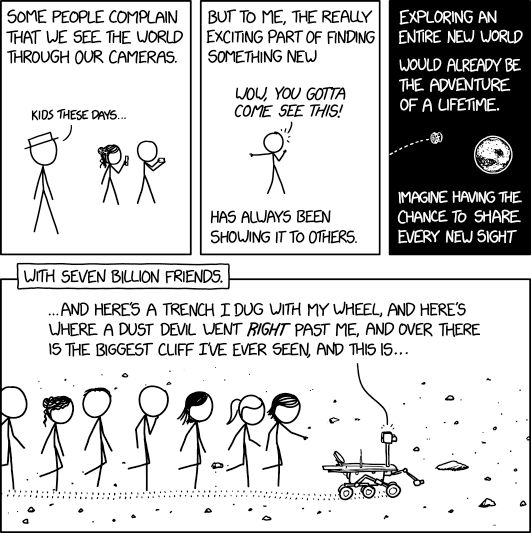 Randall Munroe of xkcd has a tribute to Opportunity today. See Munroe’s previous comics on on Spirit and Opportunity.