This is a story about those folks who see Gordon Ramsay swearing on ‘Hot Ones’ and think “Pfff. What a weakling.” Or rather, the person who’s putting them into place.

Reddit user 19NotMe73 submitted a story to the platform’s ‘Malicious Compliance‘ community. In it, they describe how they got sick and tired of their fast food restaurant customers who take an overly macho stance, insulting the heat of the sauces.

So 19NotMe73 developed a special recipe and strategy for how to shut down their ego. Continue scrolling to read all about it! 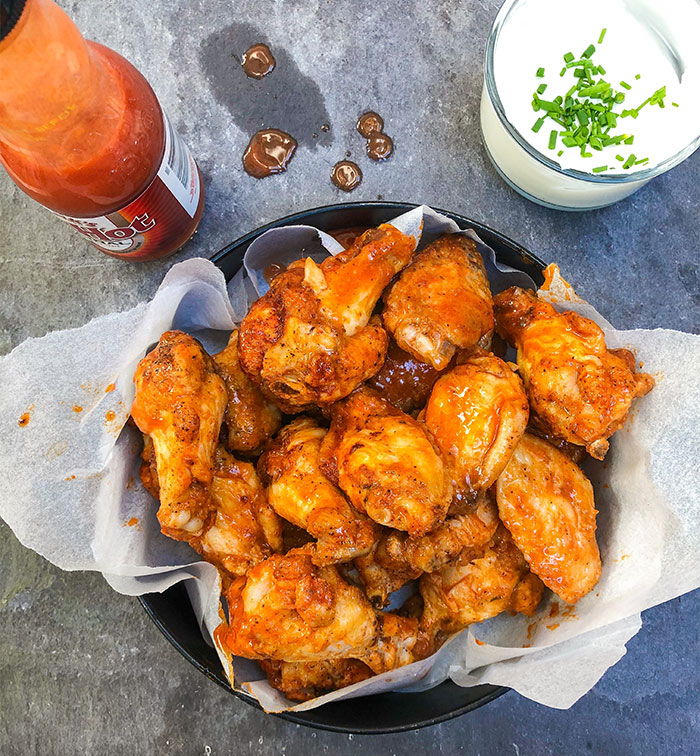 So they developed one just to shut down the complainers 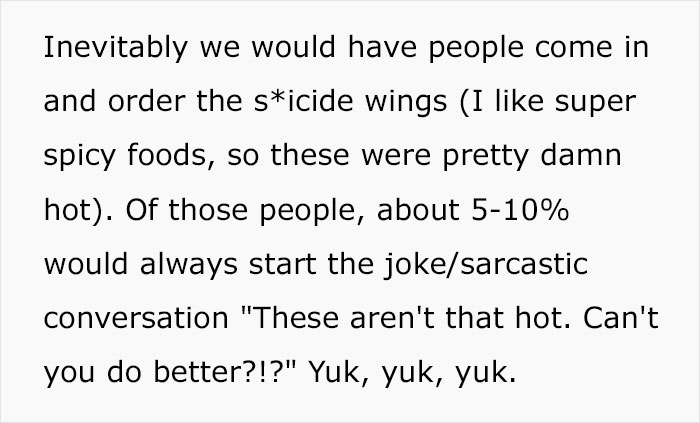 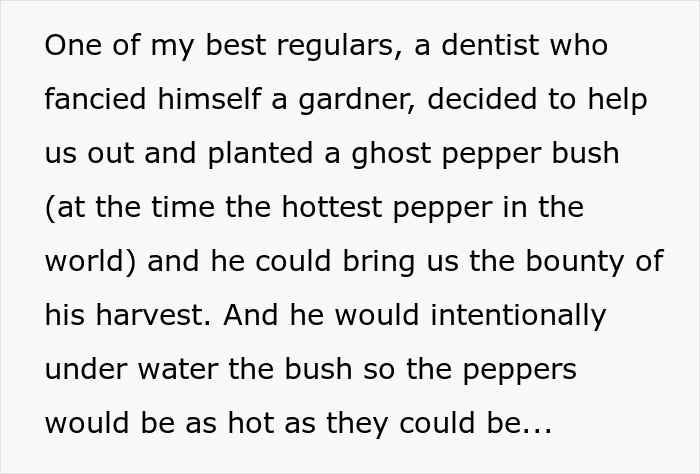 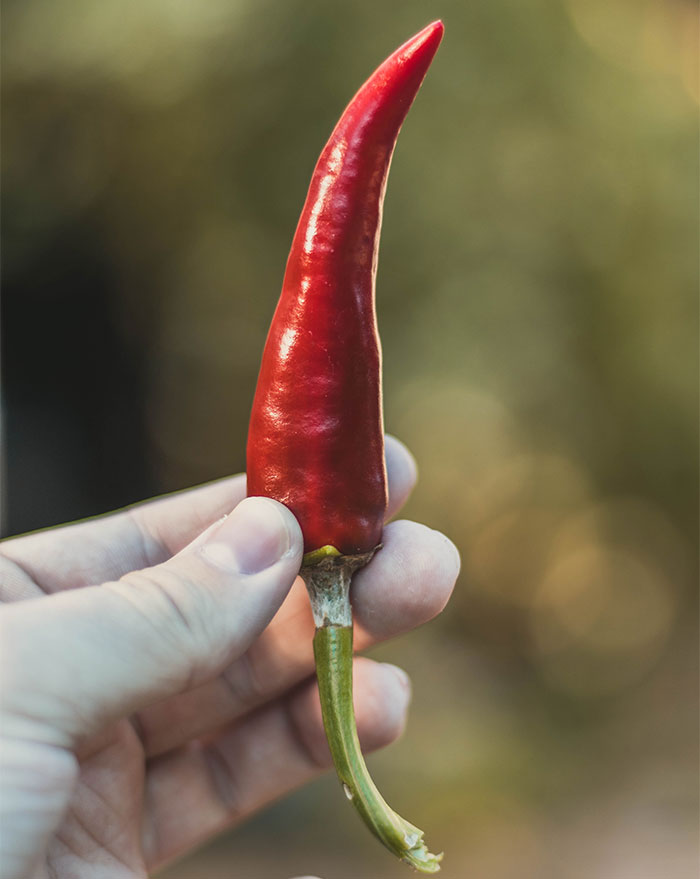 At the time, it was thought to be the hottest pepper in the world 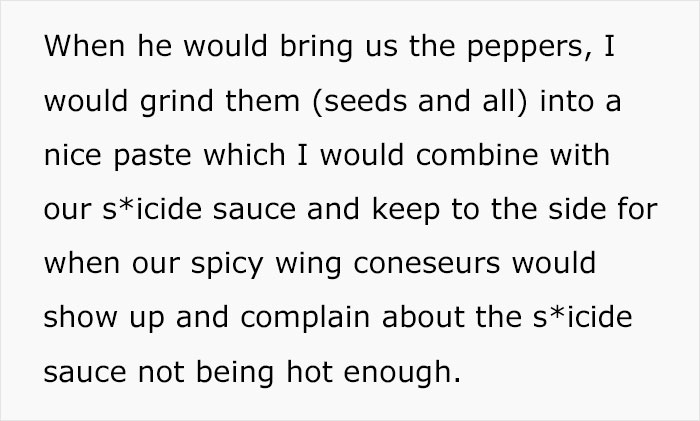 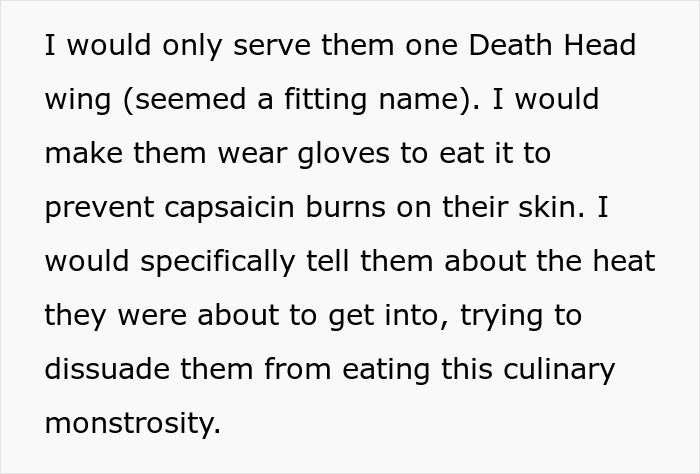 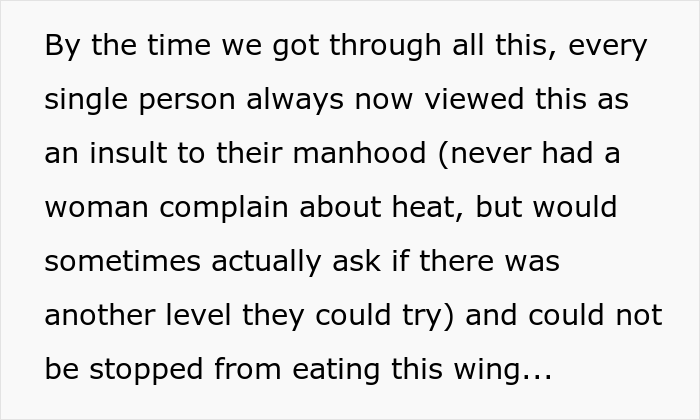 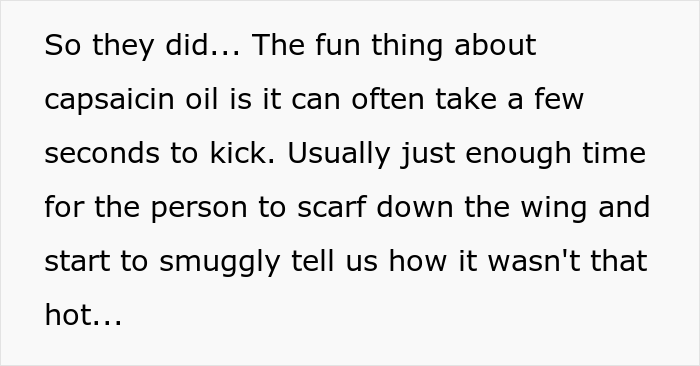 19NotMe73 picked the perfect ingredient for their revenge sauce. As the post mentioned, chili peppers are spicy due to the presence of a substance called capsaicin, which determines the heat level of the fruits.

The ghost pepper plant (Indian name bhut jolokia; scientific name Capsicum chinense) is a chili pepper plant that produces some of the hottest peppers in the world with about one million Scoville heat units (SHU).

Popular in hot sauce recipes and spicy dishes, the peppers are typically teardrop-shaped, slightly wrinkly, and red or orange, but there are also white, brown, purple, and peach ghost peppers.

Other super-hot varieties include habanero peppers and Carolina reaper peppers (now regarded as the world’s hottest pepper). Less hot options include jalapeño peppers and poblano peppers, while one of the mildest peppers is a bell pepper.

Capsaicin activates a receptor found in our mouth and on our tongue called TRPV1. The sensitivity of these receptors and even the amount of them varies from person to person, and this is one of the reasons why some of us can’t handle the spice while others love it.

In 2012, a study was conducted on identical twins (who shared the same genetic makeup) and fraternal twins (who were genetically distinct) to discover the extent to which genes play a part in their tolerance for spice. The results revealed that genetic factors accounted for 18% to 58% of the variation in the enjoyment of spicy food.

However, the irony is that 19NotMe73 has probably made their toxic customers stronger. There are indications that repeated exposure to capsaicin raises the amount needed for a similar effect, so it may also be that the more spicy food we eat, the more we can handle.

“Heat tolerance is definitely trainable,” J. Kenji López-Alt, the science-oriented food writer behind The Food Lab, said. “Kids who grow up in areas where spicy food is the norm are exposed to it from an early age and grow up eating spicy things just fine. People who don’t grow up eating spicy food can learn to do it by repetition.” Prescott offered examples of places such as Mexico or Korea: there are numbers of people there who are quite sensitive to spice, but who still develop a sufficient liking to eat it every day.

Plus, there is likely a psychological element at play here. Research has also revealed that many spice enjoyers feel the burn just as much as the ones who hate it but find the experience pleasurable instead of a painful one.

But they did suffer at least for a while!

People absolutely loved that the cocky jerks got what they deserved 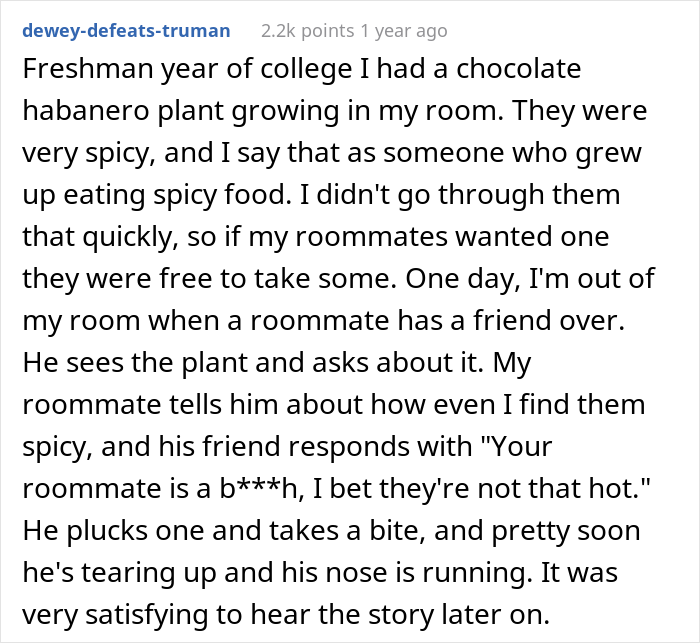 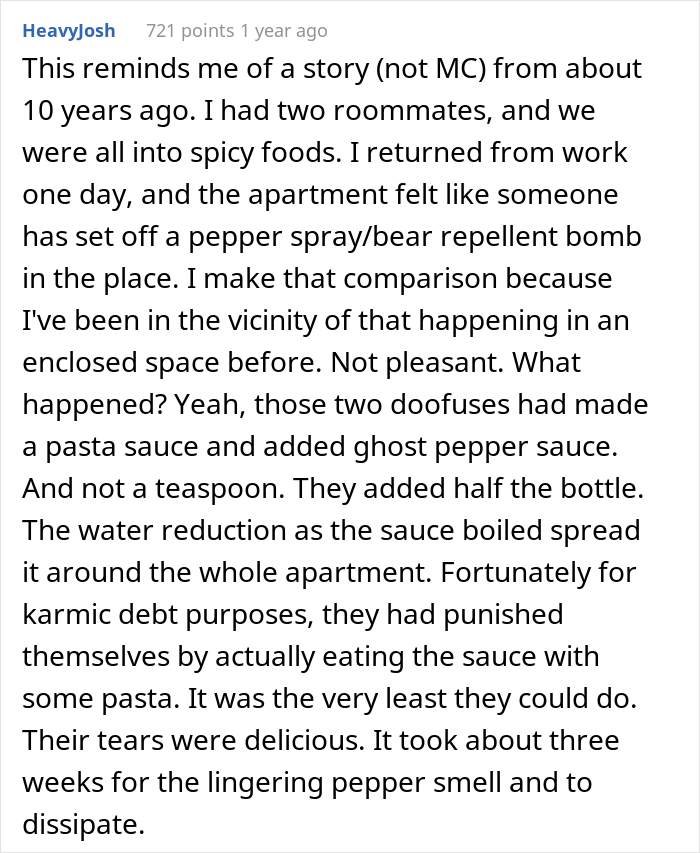 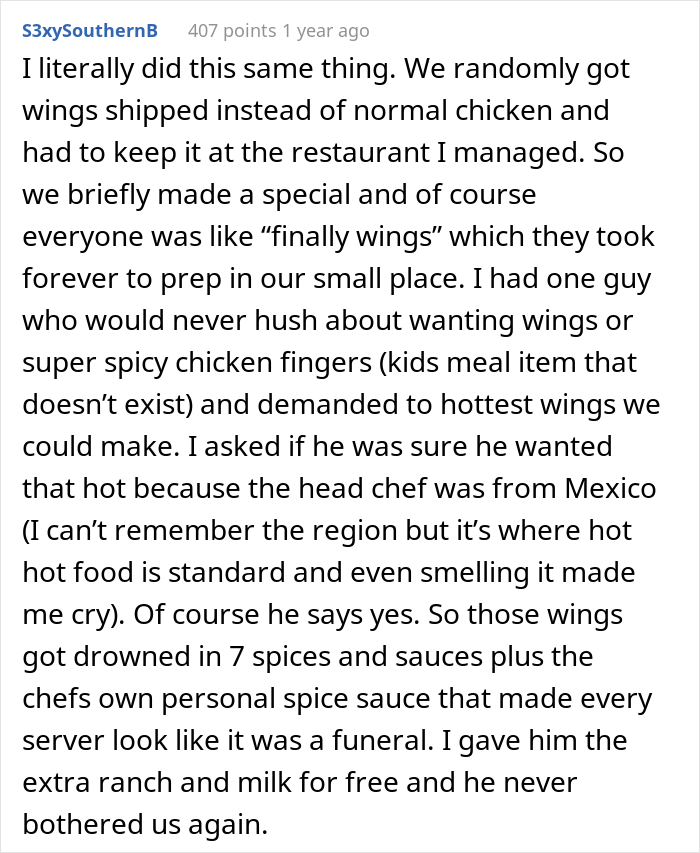 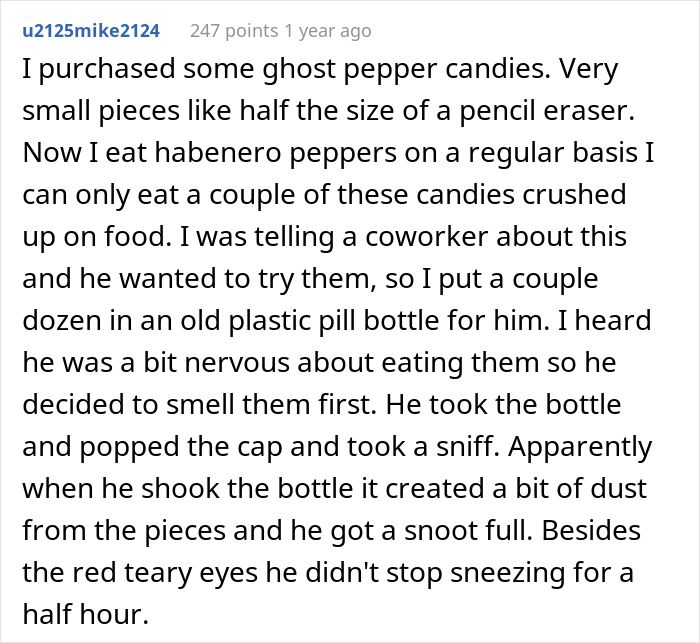 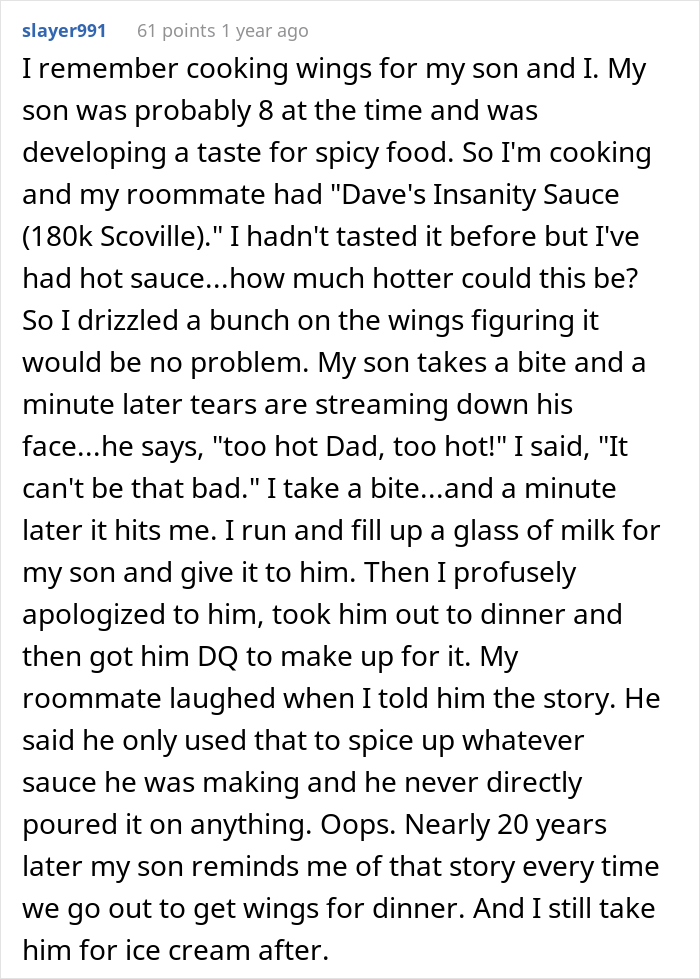 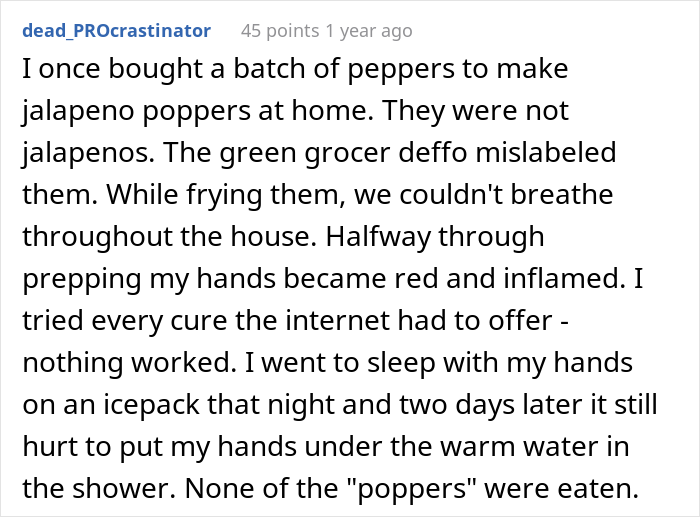 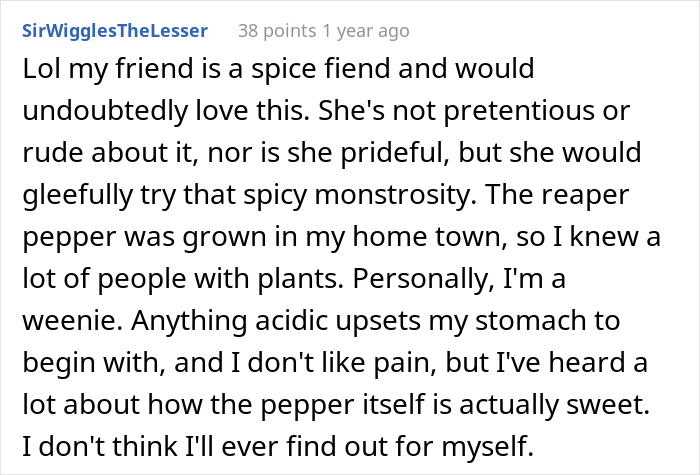 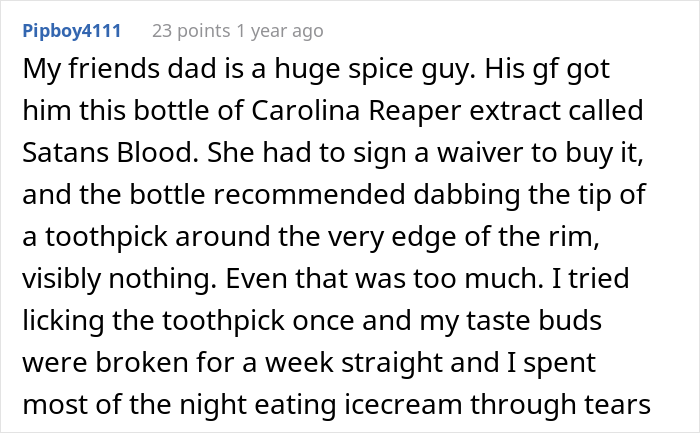 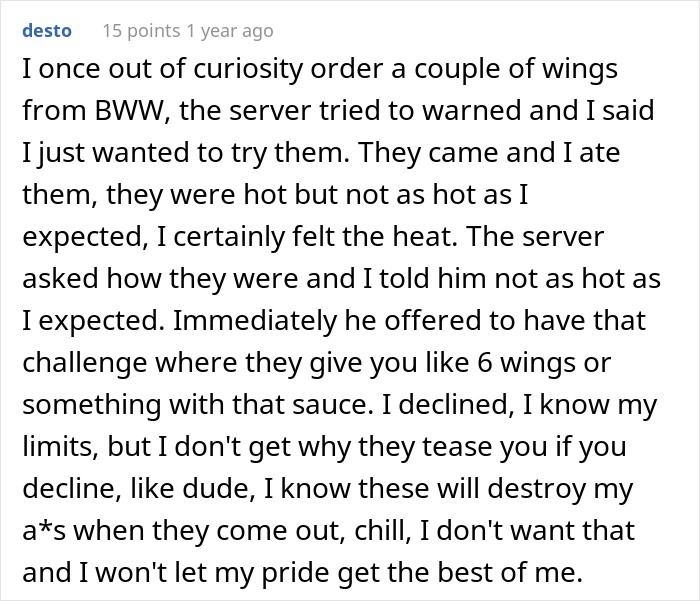 The post Restaurant Owner Gets Tired Of Overconfident Men, Develops A Tongue-Burning ‘Culinary Monstrosity’ To Shut Them Down first appeared on Bored Panda.