There are a few things that you expect when you go to a place for dinner. Obviously, you would want the food there to be good, the staff to be polite and efficient, for the place to be clean and sanitary, and maybe nice music or comfortable chairs.

However, a woman who came to a steakhouse in Texas was also expecting to be served by a person who would conform to the gender norms she believed in. She was very upset when she was brought food by a server she called a “boy” who wore nail polish and a sparkling choker.

The owner of the steakhouse was not at all scared that the customer would not return ever again to eat at the place and came back with a sharp response that people online couldn’t help but applaud. 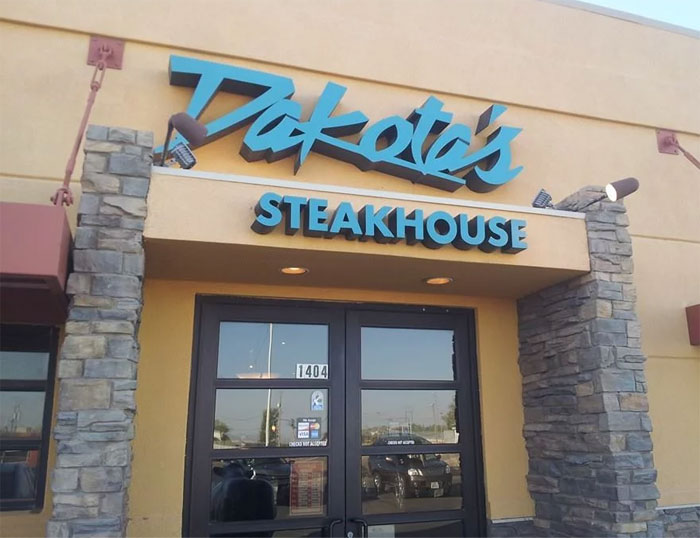 A screenshot of a Facebook review of a Steakhouse in Hereford, Texas went viral on Reddit with 26k upvotes in the subreddit called r/insanepeoplefacebook with the headline “Debbie refuses to be served by trans waitstaff; husband even comes unglued at the thought! Restaurant does not care.”

Well, actually, Debbie didn’t refuse to be served by trans waitstaff, as from the context we can’t tell that. We don’t know if the man she mentions is her husband or not, but what we can confirm is that the server wasn’t transgender. A manager from the steakhouse talked to Snopes and informed them that the employee was part of the LGBTQ+ community but didn’t identify as transgender. 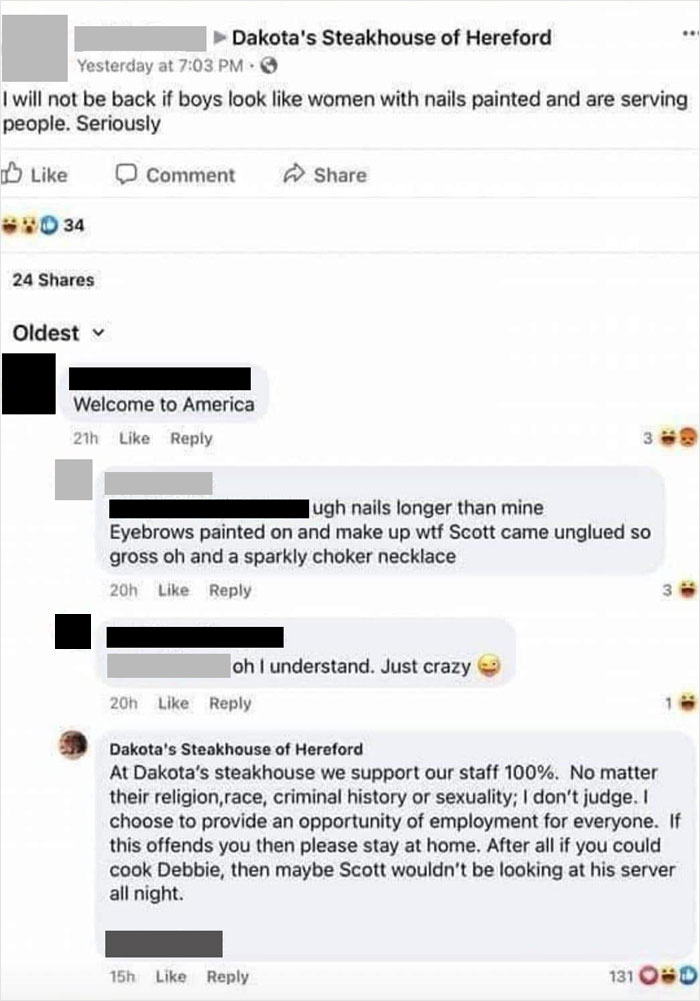 What else is there to the story? The viral screenshot shows a Facebook post directed to Dakota’s Steakhouse of Hereford. The woman started with a threat to never come back to the steakhouse unless there are some changes in the staff. She was disgusted that she had to suffer being served by a person who she thought should be a man but looked like a woman with painted nails. 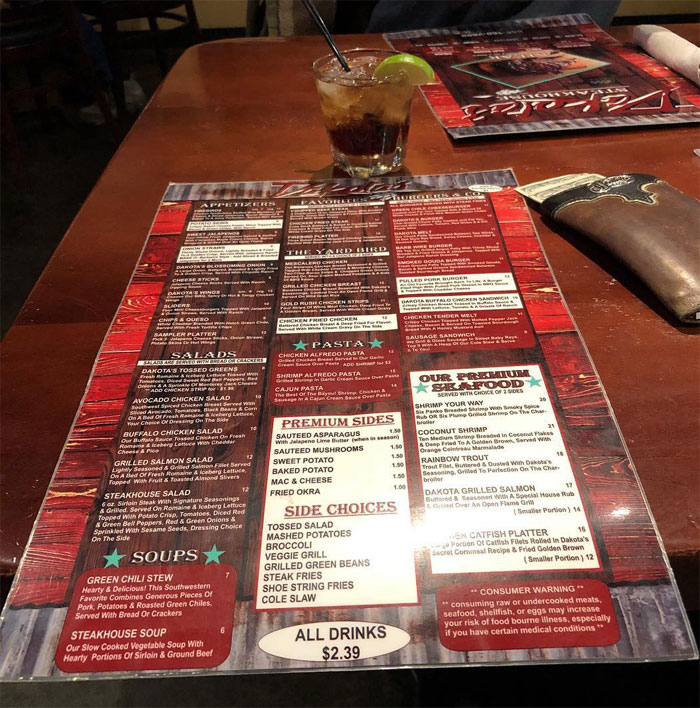 When another person who shared her pain responded to the unsatisfied customer, Debbie replied with a little bit more information. She said that the server had nails that were longer than hers, wore makeup and had painted eyebrows. The last straw for Debbie was that the server wore a sparkling choker necklace.

She was outraged by such a look and she wasn’t the only one. The person she was with, Scott, “came unglued,” which is a phrase often used in the South meaning a person is upset or distressed.

The owner explained that he doesn’t discriminate against people and if that bothers Debbie, she shouldn’t leave her home 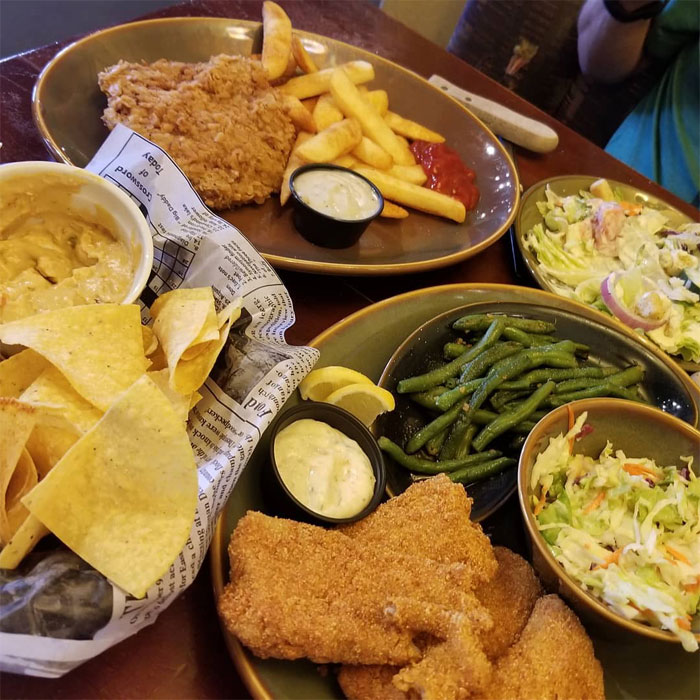 While Debbie and Scott were upset at being served by a person they didn’t approve the look of, Dakota’s Steakhouse was upset that their customers insulted one of their employees. So they wrote quite a snappy response.

The owner of the steakhouse explained that he doesn’t judge people or discriminate based on their religion, race, criminal record or sexual orientation, so he can hire anyone he sees fit for the position. 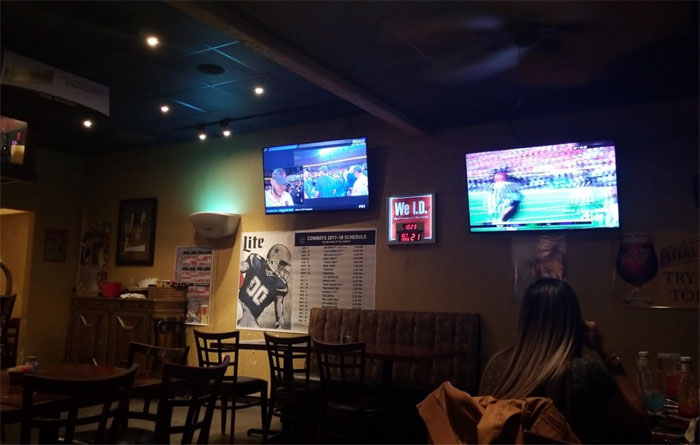 What made the internet go crazy was that the owner didn’t stop there. He continued, “If this offends you, then please, stay at home. After all, if you could cook, Debbie, then maybe Scott wouldn’t be looking at his server all night.”

Of course, we don’t know what relationship Debbie has with Scott but the owner’s remark still made an impression and people loved the fact that he made the effort to fight for the people who work for him. 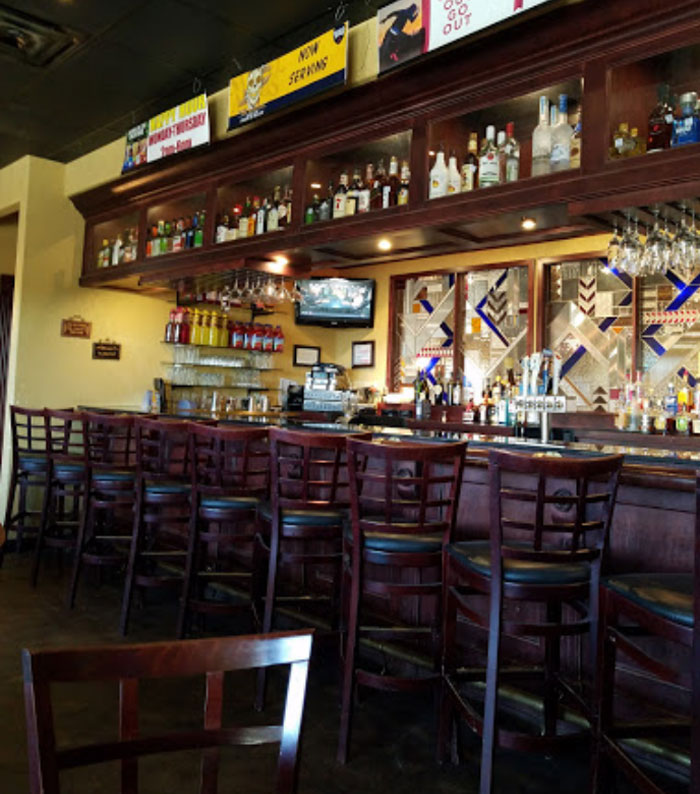 What do you think of this story? Did you like the owner’s response to the woman’s post? Would you be angry if you were served by a member of the LGBTQ+ community or someone who you would assume was transgender? Leave us your thoughts and reactions in the comments! 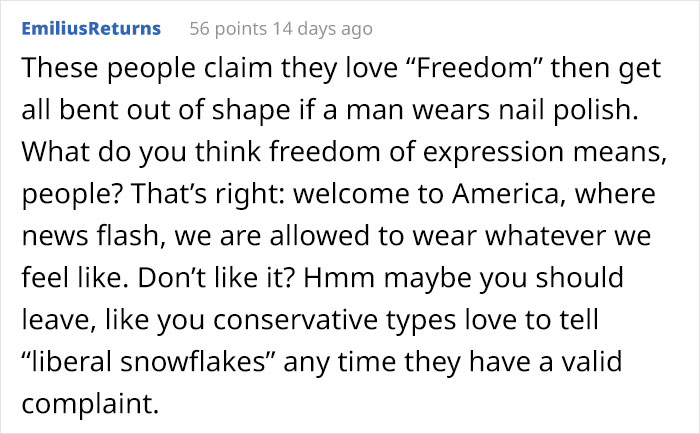 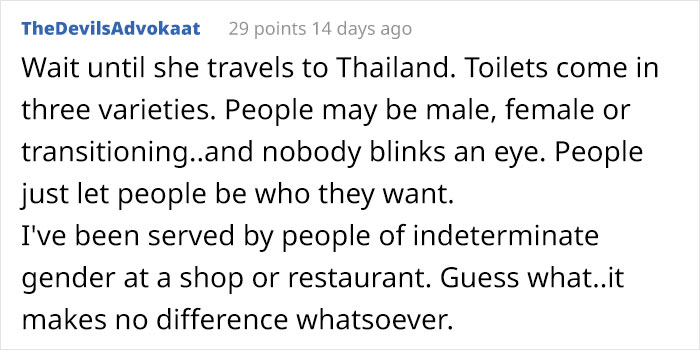 The post Restaurant Owner Shut Down Homophobic Karen With A Sharp Reply As She Insulted Their Waiter Who Belonged To The LGBTQ+ Community first appeared on Bored Panda.