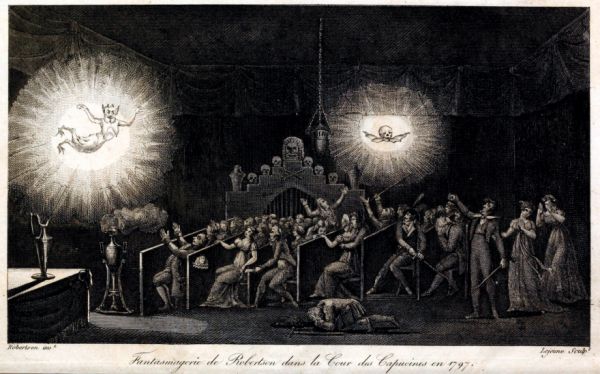 As soon as the Magic Lantern was invented somewhere around 1650, Jesuit priest Athanasius Kircher appropriated it to project skeletons and scare people into going to church. Sure, the image projector was a scientific breakthrough, but it soon became apparent that its real future lay in entertainment. One of the earliest and most successful showmen to popularize the Magic Lantern was Étienne-Gaspard Robertson, a gifted physicist who was seriously interested in summoning the devil. He developed quite a few methods for making a magic Lantern presentation into a horrifying, adrenaline-fueled spectacle.

The show was about an hour and a half, and it was made up of several scenes introduced by Robertson on the themes of love, death, and resurrection, incorporating ancient gods and figures from history and mythology. Between the ghosts and dancing demons, the story of Eros and Psyche was told; Isis and other mystery goddesses were honored; and Hades and Persephone presided over everything. The Graces were summoned only to degrade into skeletons before the startled audience, and a woman representing love and death was a common feature, appearing throughout to tease the audience until she was killed by the Fates, only to be resurrected with rose petals near the end.

This was no ordinary slideshow—Robertson’s innovation and mastery of the Magic Lantern produced effects difficult to imagine even now. The scenes he created were elaborate, detailed, and animated; between the speed of the changing slides, variable depth, and visual effects, Robertson had all but created early 3D cinema. Multiple devices hidden by screens projected monsters and ghouls onto walls, smoke, and special lengths of canvas and gauze treated with wax for translucence. Ventriloquists and sound effects brought them to life in ways people had never before experienced. The ghosts appeared so real, audience members tried to fight them.