In response to Putin’s invasion of Ukraine and despicable war crimes by the Russian army that shocked the whole world, French luxury giant Chanel has stopped sales of its clothes, handbags, perfume, accessories and other items to customers who were intending to use the products in Russia.

Chanel said it has “rolled out a process to ask clients” shopping abroad or “for whom we do not know the main residency” to confirm that the products they are buying “will not be used in Russia.” The fashion house has already shut its stores within Russia, following the steps of many other fashion brands.

Chanel’s ban enraged Russian influencers like Victoria Bonya and Marina Ermoshkina, who have 9.3M and 300k followers respectively, so they are now filming themselves destroying their Chanel purses. They are now accusing the fashion house of “Russophobia” and the attempt to “cancel Russia.” 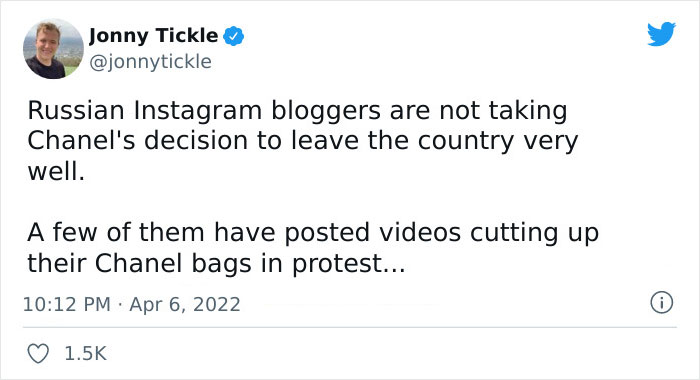 According to BBC, the French fashion house confirmed in a statement that it was complying with a ban initiated by Switzerland and the EU pertaining to the sale of luxury items to people who intend to use them in Russia.

“This is why we have rolled out a process to ask clients for whom we do not know the main residency to confirm that the items they are purchasing will not be used in Russia,” Chanel said. “We are currently working on improving this approach and we apologize for any misunderstanding this may have caused.”

Victoria Bonya, a Russian Instagram model with 9.3M followers, stated she “has never seen a brand acting so disrespectful towards their clients as Chanel” 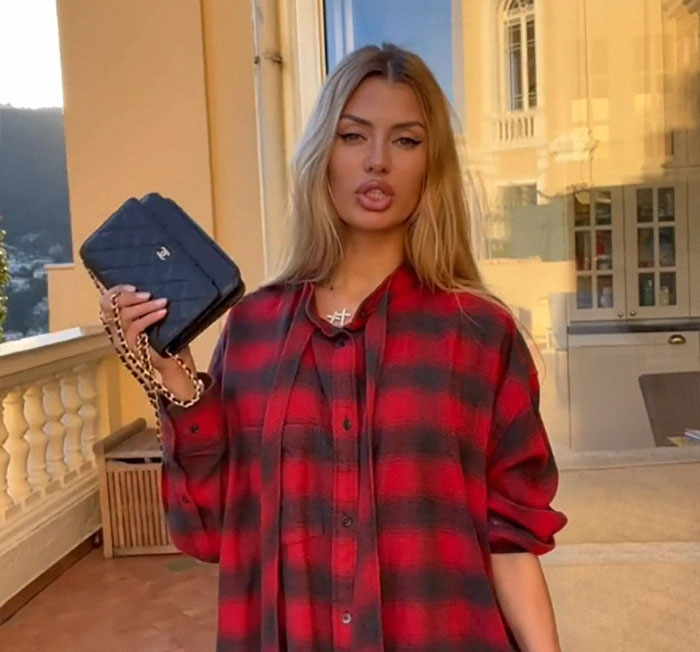 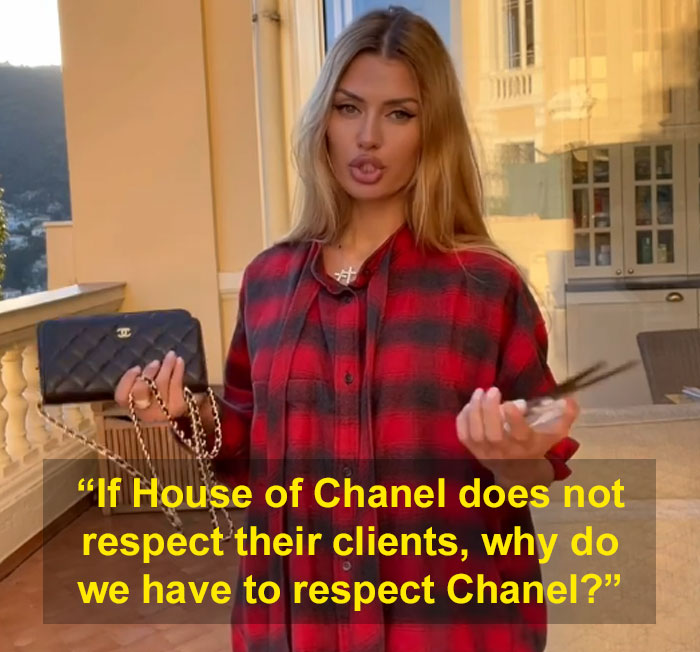 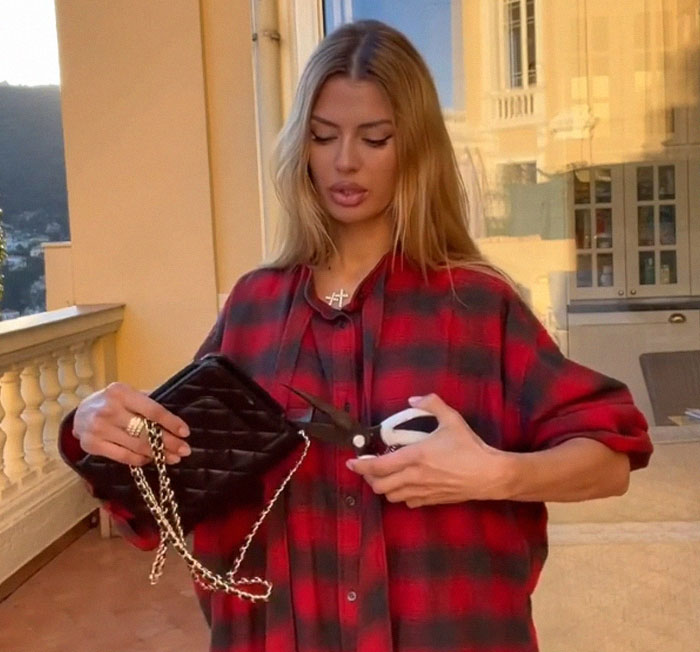 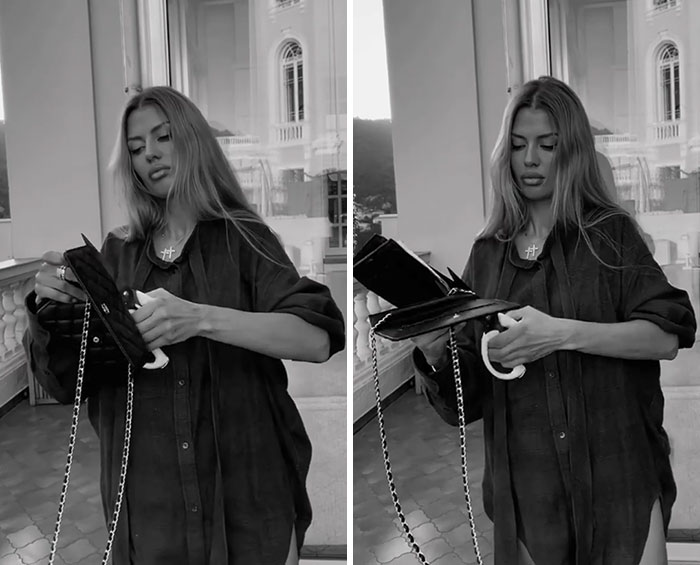 Chanel’s decision enraged Russian owners of the brand’s handbags: models, television presenters and influencers who accused the brand of fueling hatred toward Russians. They deemed the ban “Russophobia” — echoing Maria Zakharova, Moscow’s Foreign Ministry spokeswoman, who said earlier this week that Chanel had joined the “Russophobic campaign” to “cancel Russia.” 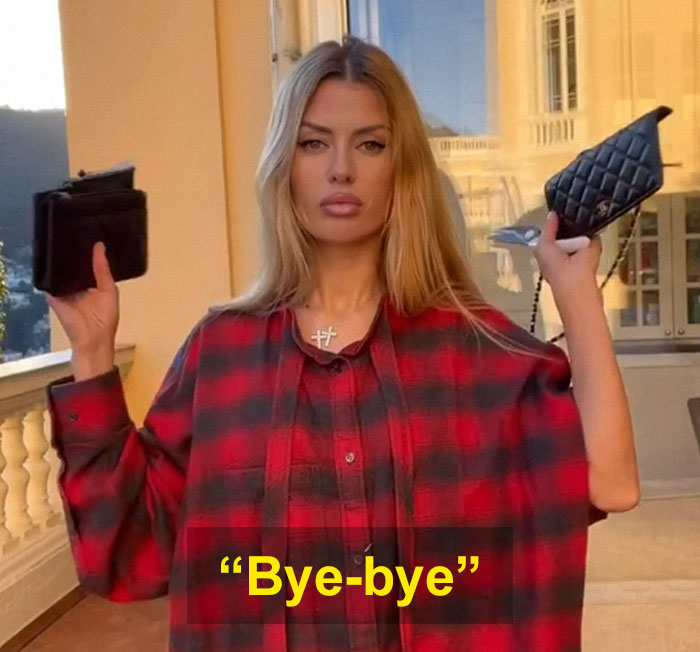 To find out more about why exactly Russian influencers are cutting their Chanel purses with scissors as well as where the fashion industry stands in the context of the Russian war and its brutal crimes against Ukraine, we spoke with Lina Survila. Lina is a founder and editor in chief of the online cultural magazine “Abstract Stylist,” and a former L’Officiel fashion editor with a decade-long experience in fashion.

“Fashion has always had a powerful impact on the economy. But, it also has always adapted according to the world’s needs. For example, many fashion brands expressed their position on the Russian war and its crimes in Ukraine,” Lina said and added that “As a result, luxury conglomerates and brands left the Russian and Belarusian markets, causing big losses.” 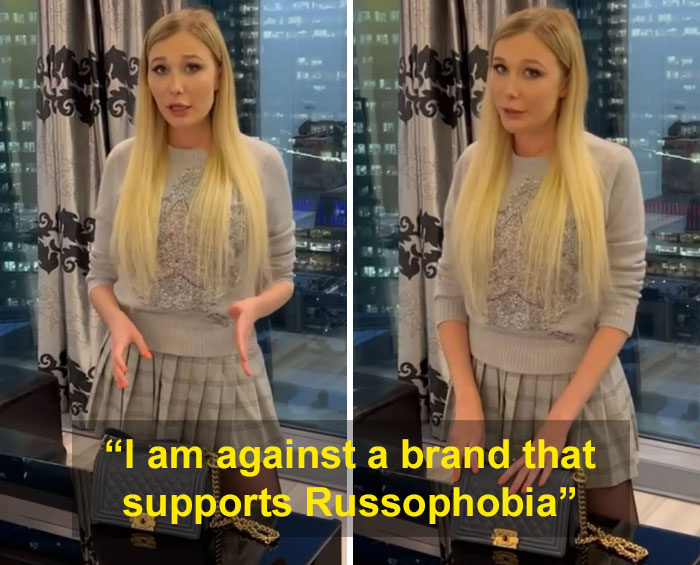 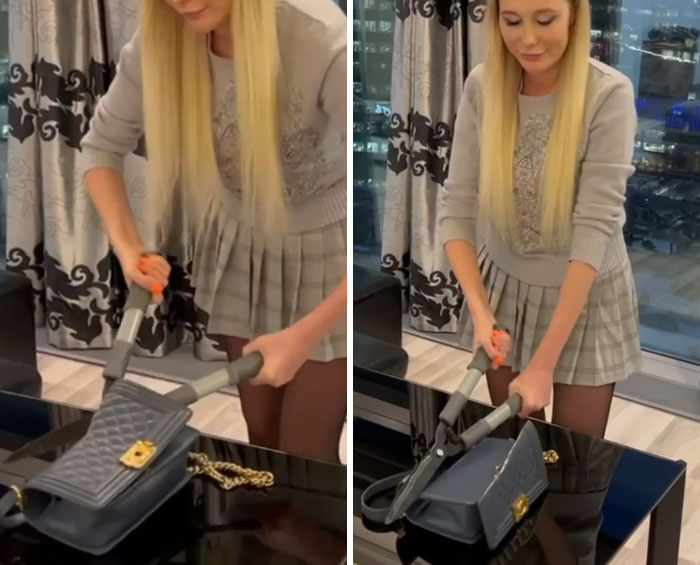 Lina explained that “with many Russian influencers declaring propagandist views on the war, it became clear that all Russians must address their government and make a change from the inside. This is why the Chanel brand chose not to sell to Russians.” 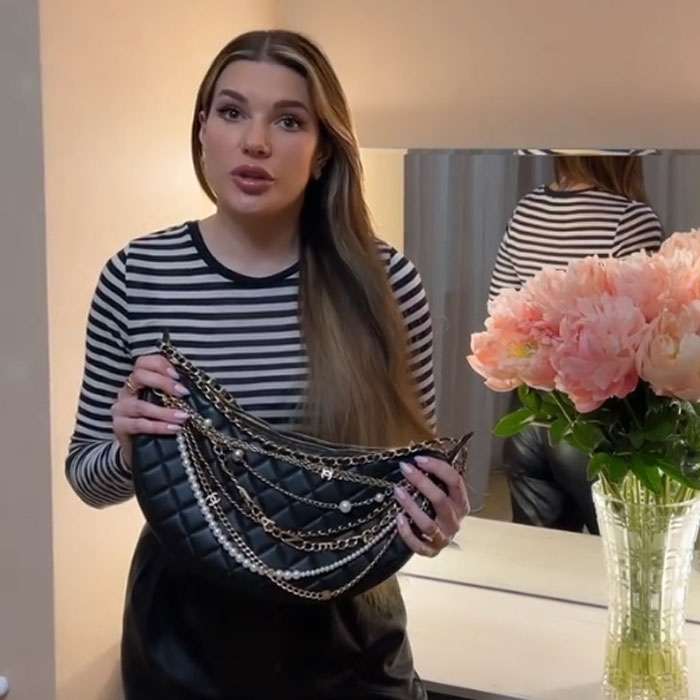 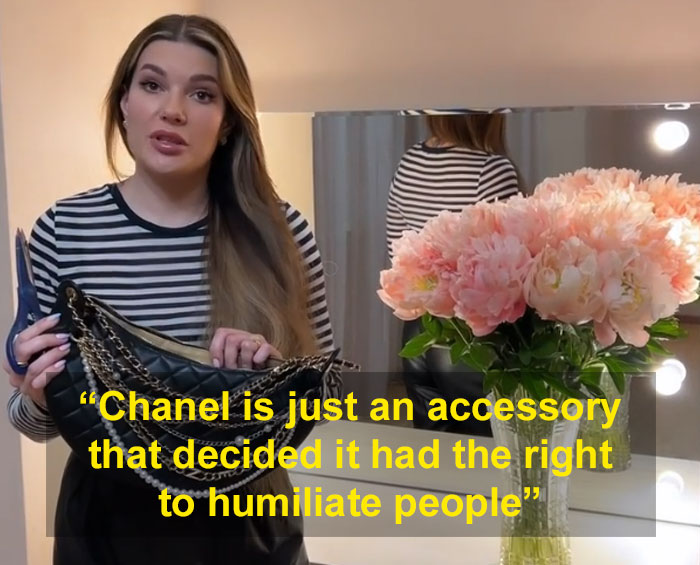 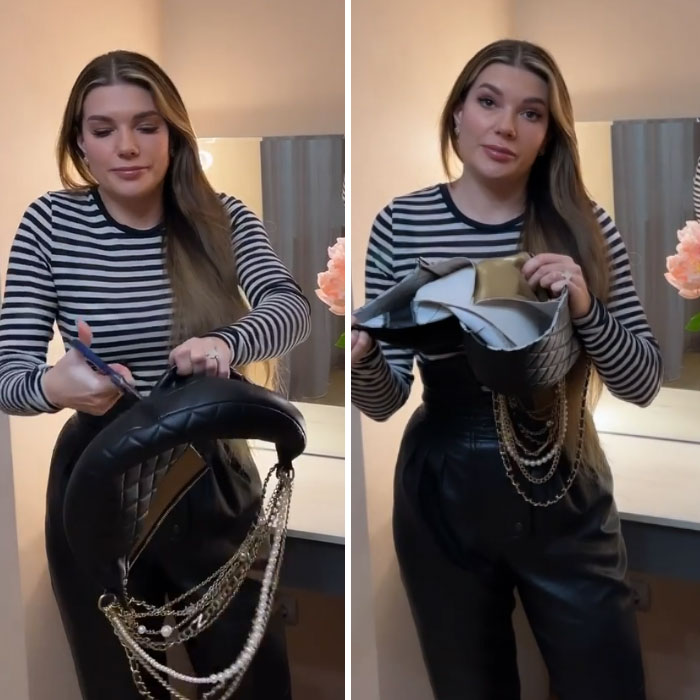 “Unfortunately, Russian influencers staying safe in luxurious places all around Europe don’t seem to acknowledge the propaganda of their home country and even spread it by showing no compassion for the people of Ukraine. The brand understands the power of image and does not want to be associated with influencers spreading propaganda,” the fashion expert explained. Lina added that “In my view, all brands should follow.” 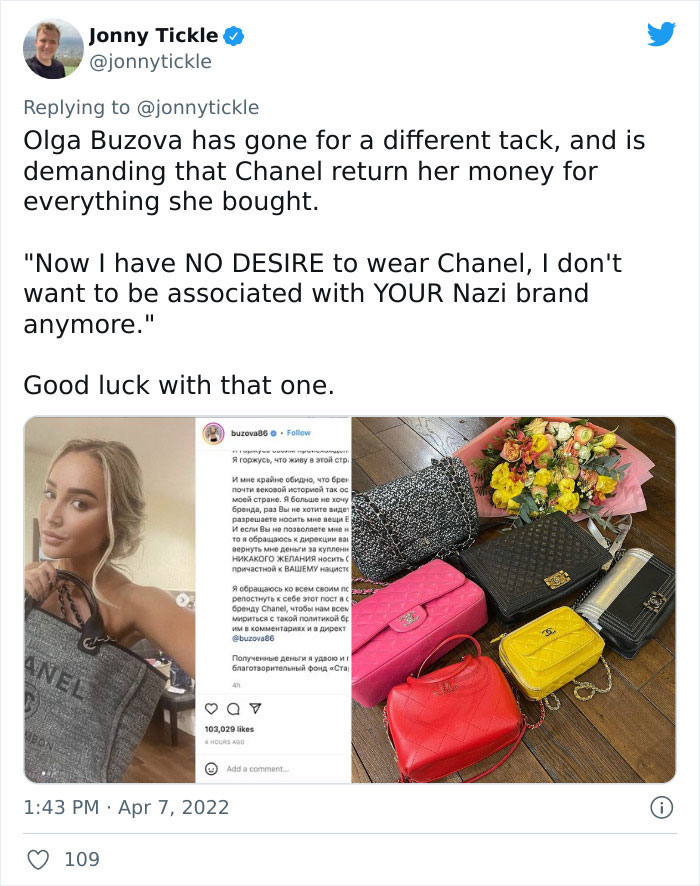 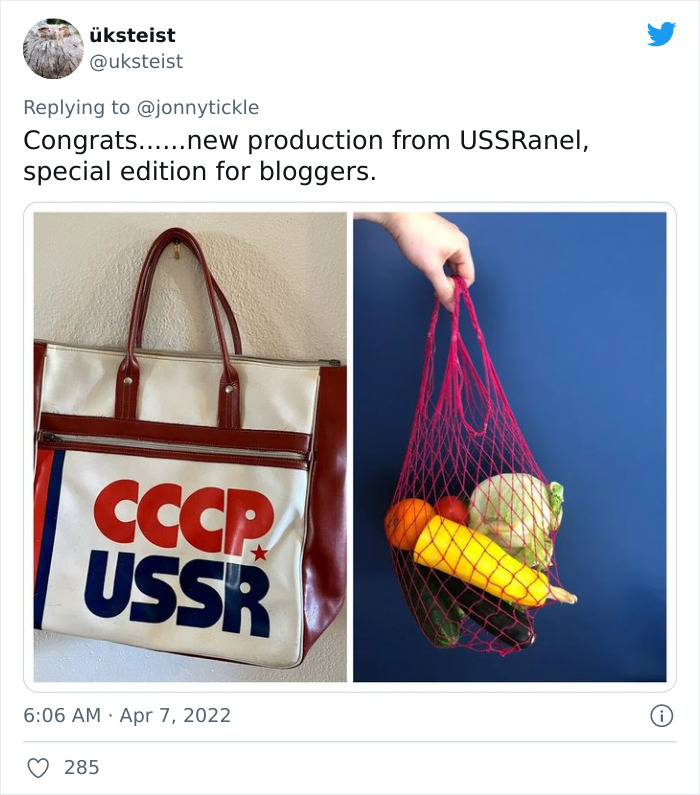 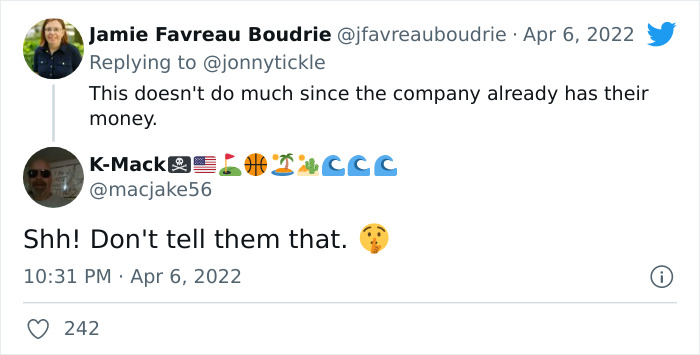 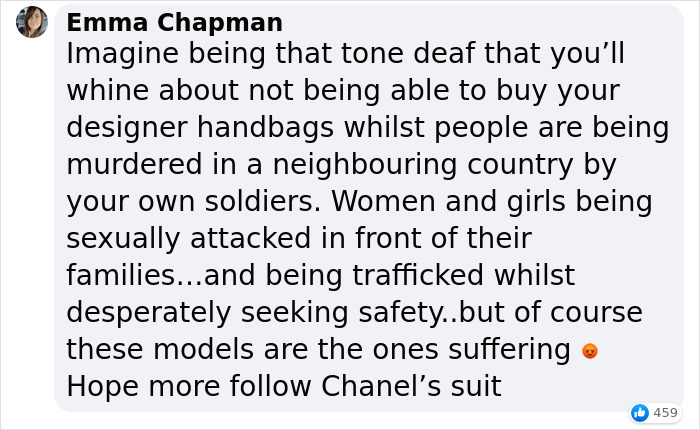 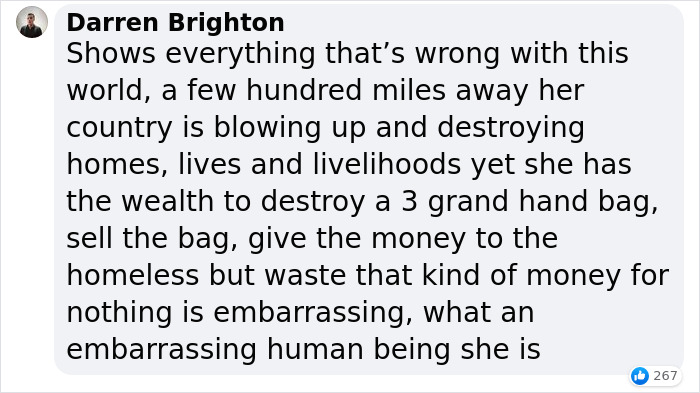 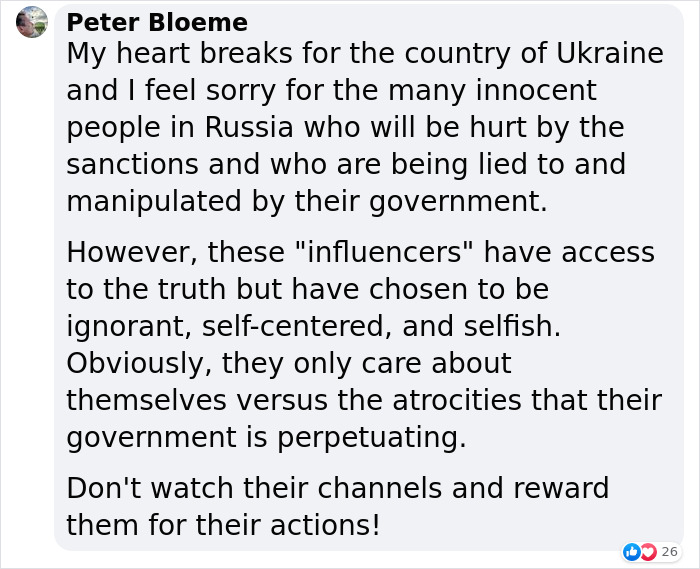 The post Russian Influencers Are Cutting Up Their Chanel Bags As The Brand Restricts Sales In Russia first appeared on Bored Panda.