The Bolshoi Ballet, Russia’s premier ballet company, hit the ballet world with another scandal recently by canceling its much-anticipated premiere of biopic performance, Nureev, three days before curtain. Created by director Kirill Serebrennikov, choreographer Yuri Possokhov, and composer Ilya Demutsky, it was a performance that combined ballet and theater to tell the story of Rudolf Nureyev, one of the greatest dancers of the 20th century. The performance was expected to be the cultural event of the year, potentially revolutionizing the repertoire of the classically-minded Bolshoi, as well as a new opportunity for touring and income from the international stage.

Caption: “Today would have been the premiere, but Rudi cannot live without freedom. And once again, he flitted away. Yuri, Ilya, artists, dancers, choir, all our friends and brothers in theater, everyone who made this performance, including the producers and general direction Urin–thank you for the opportunity to do this. Just as these words are stored in the “cloud,” so do unreleased performances go straight into a special holding place, but they never disappear. Friends, I love you all. Rudi is very happy with us, I’m sure. Photo by D. Yusupov.” Translation by the author.

It’s impossible tell the story of Nureyev’s life without discussing his homosexuality. At the least, it lead to his premature death from AIDS at the age of 54. He was a consummate rebel, prone to promiscuity and diva-like behavior. He worked tirelessly to promote non-classical forms of dance within the ballet community by working with such greats as Martha Graham, and as director of the Paris Opera Ballet, he created new vehicles for the company’s development. He also “helped boost the prestige of the male dancer…Nureyev proved that virility need not be incompatible with artistic genius,” writes dance historian Susan Au. He helped shift the perception of male dancer from athlete to artist, and devoted his life to freedom from both political and artistic oppression. 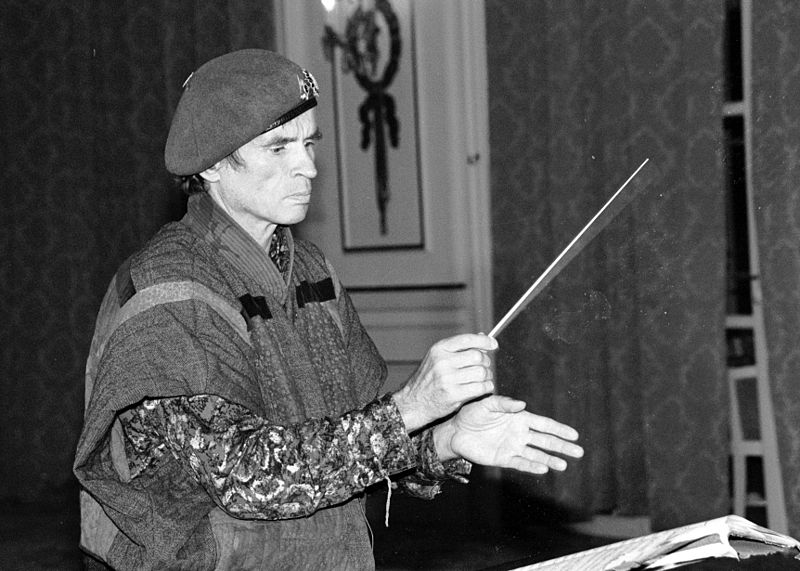 Thus, the cancellation is almost unprecedented in the history of the Bolshoi. General director Vladimir Urin cited unpreparedness as the reason for cancellation, however, given the prestigious reputation of these dancers, as well as Russia’s strongly anti-LGBT political atmosphere and Serebrennikov’s recent arrest for the alleged embezzlement of government funds during a production at his theater company, the cancellation of this highly anticipated and very expensive production has acquired a political undertone.

The reason that jumps out is the ballet’s frank exploration of Nureyev’s homosexuality, another example of erasure of LGBT experience in the country. Based on leaked photos, videos, and commentaries, the cancelled performance included the main character dancing in nothing but a flesh-colored dance belt, and a scene wherein a group of male dancers perform wearing high heels, moving in ways that suggest inspiration from vogueing. The backdrop includes a huge photo of Nureyev in the nude, shot by Richard Avedon. There is also a duet between two men depicting the relationship between Nureyev and his longtime partner Eric Bruhn. The duet is not overtly sexual in its choreography, and the men touch approximately five times in eight minutes.

All this has appeared in ballets before, but not in the context of explicit homosexuality. While the line about the company being under-rehearsed may ring true, others are citing a culture war on the historic Bolshoi stage as reason for the cancellation. The Bolshoi is known for its classic story ballets, preserving tradition as an institution that is at the very core of Russian culture. These comments, however, still reek of homophobia. There is a cultural obsession with the Bolshoi stage being a bastion of tradition, but modern conservative fist-bangers forget that some pieces they consider classics, such as Yuri Grigorovich’s Legend of Love, included plenty of stormy duets that stirred controversy and claims of impropriety and pornography in the 1960s. Nevertheless, there have been multiple instances in the past where anyone who has tried to modernize the Bolshoi’s repertoire generally fails, with the worst of it being the acid attack on ex-director Sergei Filin.

The concept of disrespect to the historic stage seems even more ridiculous when considered in light of the disrespect it shows to Nureyev himself. Vladislav Lantratov, who was supposed to play the title role, shared with Creators the heart-breaking discoveries he made about the man during rehearsals. “I found out that Nureyev was an absolutely lonely person. He has art, love, success, is surrounded by events, people. Despite it all, he is alone. And the dramaturgy of the performance, wich seems simple—a chain of episodes in the biography of Nureyev—actually requires from a performer not only physical strength, but total inner reincarnation,” says Lantratov.

He also expressed on social media in Russian: “No words. The understanding that as soon as you fall in love with a role, begin to live anew in the performance…and in a second, that small life gets ripped out from you by the core. This is the worst thing that could happen to an artist.” Nevertheless, he remains hopeful, telling Creators he sincerely believes the performance will take place next year as “the dancers and staff of the theater have made maximum effort for that to happen.”

Now, according to Moscow Times, “authorities are promising to run the show on the very eve of Putin’s next presidential inauguration, in May 2018.” The cancellation reflects a climate of growing political unease in Russia. These kinds of cancellations “were not uncommon during the Stalinist period,” dance historian Lynn Garafola tells Creators, “but at a time of general liberalization in the realms of sex and gender, to see the Bolshoi, the very core of Russian culture, clamping down on something like this is disturbing.” The Bolshoi is a cultural icon, but it’s also a political one, and the internal politics of the company have often reflected those of the Kremlin. Even though Urin denies any government involvement in his decision to cancel the performance, perhaps this latest scandal is a reflection of the current political climate.