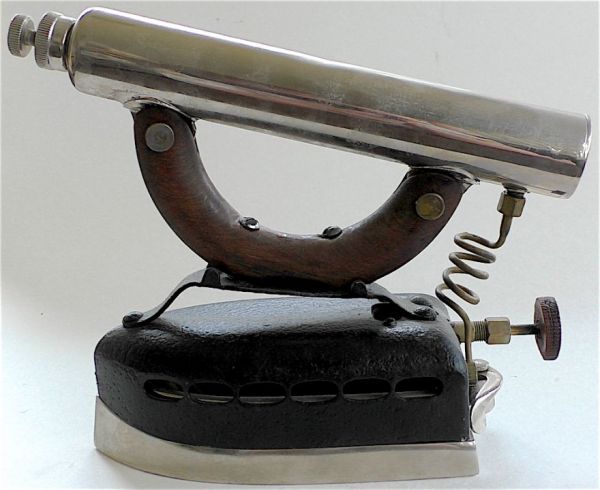 Electric irons arrived in the 1890s. McCartney does not collect these. Again, from the perspective of the 21st century, you’d be forgiven for concluding that once electric irons arrived, it must have been game-over for coal, liquid fuel, and natural gas irons, right? In fact, initially, electric irons were perceived to be more dangerous than irons filled with billowing flames and potentially explosive fuel tanks in their handles. That’s because it wasn’t until 1928 and the invention of the thermostat that electric irons had more than one heat setting—high. As counterintuitive as it might seem today, for almost 40 years, electric irons were more deadly than ones heated with actual fire.

“Electricity was the nuclear power of its day in the sense that people were not thinking rationally about it,” McCartney says. “It was bad. People got electrocuted, and there was no temperature regulation in those irons. You’d plug it in until it got really, really hot, then you’d unplug it and do your ironing. When it cooled off, you’d plug it in again, unplug it, use it again, and so on. And if you plugged it in and the baby started crying and you got distracted and forgot to unplug it, you’d lose your house. These things were fire hazards.”

You might wonder how “coal, liquid fuel, and natural gas” irons worked, which McCartney tells us about at Collectors Weekly. Learning how the chore was done back then will make you appreciate electric irons, tumble dryers, and permanent press clothing.

Rating Sad Iron Man: A Maine Geologist Wants You To Know How We Used to Press Our Clothes is 5.0 / 5 Votes: 4
Please wait...
Loading...
Related articles