Sam McKinniss is among the greatest colorists of his generation, as would have been clear to anyone who saw his 2016 exhibition at Team, “Egyptian Violet.” The show’s thematic anchor was the titular color, a rich, glamorous purple that appeared prominently in the paintings on view. The works were based on an eclectic mix of images McKinness found online: Lil’ Kim in seashell pasties at the 1998 VMAs; Laura Dern as Sandy Williams in Blue Velvet; a poster for the 1996 movie Flipper, about a friendly pet dolphin; the cover of Prince’s album Purple Rain; floral still lifes by Henri Fantin-Latour. Foregrounding the royal color linking the source images, McKinniss’s paintings drew out a majestic quality latent in each. The Flipper poster is kitsch, but McKinniss’s painting based on it isn’t: exaggerating the shimmering arc ofbubbles trailing the dolphin and deepening the hue of the water, the work has all the gravity of a court portrait. This is a technical feat—a less skilled painter wouldn’t have pulled it off—but also a matter of attitude: McKinniss does not so much level distinctions between high and low as refuse to acknowledge them in the first place, starting from the presumption that the only categories of image that exist are interesting/not interesting, beautiful/not beautiful.Por 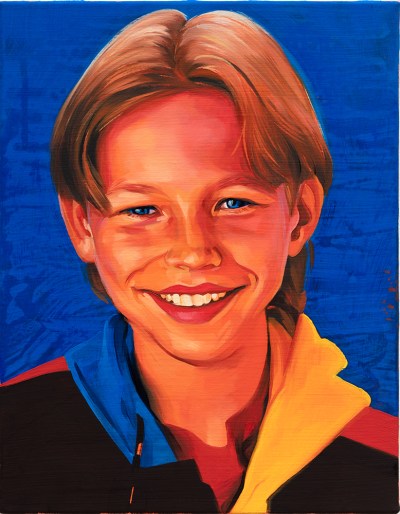 Unlike the thrilling grab bag of “Egyptian Violet,” the paintings in McKinniss’s most recent exhibition, “Jonathan Taylor Thomas” at—wait for it—JTT, were more obviously connected by a theme: child stars. Based on paparazzi shots, movie promos, and magazine images, the paintings portrayed such celebrities in an ABC palette of primary colors, as if to emphasize the subjects’ suspension in a state of permanent adolescence. Hanging alone on one wall like an icon painting was JTT (2020), a small, closely cropped depiction of a baby-faced Thomas grinning in the pages of a ’90s teen mag, the oversaturated orange glow of his skin contrasting sharply with the electric blue ground. Nearby, Aaliyah (2020) captured the singer posing sassily in head-to-toe Tommy Hilfiger, hovering over a field of modulated white that loosely suggested light bouncing off a magazine page. Lindsay Lohan appeared three times: as the long-lost twin protagonists of Disney’s 1998 Parent Trap remake in Hallie and Annie (2020), and as herself circa 2012 in Lindsay (2020), caught by a paparazzo grimacing behind the wheel of her car with smeared mascara and a cigarette in hand. In Serena (2019), Serena Williams lunges for a tennis ball with balletic grace, the clay court portrayed as a depthless field of deep red. 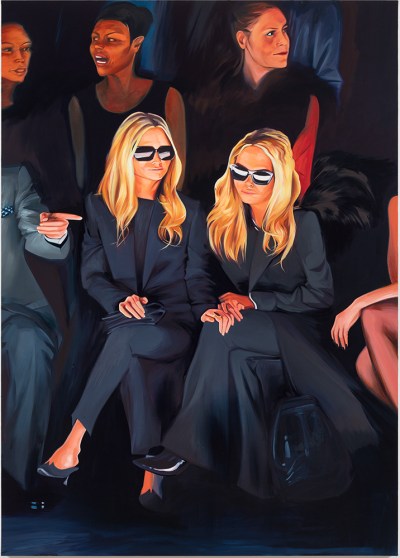 Each painting was a collection of exquisite, painterly details, from Williams’s satiny spandex to Lohan’s nicotine-stained teeth. But the source images never quite receded from view, as they do with McKinniss’s best work. Too often the paintings seemed merely like inexact copies. When I looked at them, I couldn’t help but see the original images in my head, and the comparison didn’t always work in the paintings’ favor. In The Olsens (2019), for instance, McKinniss perfectly captures Mary Kate and Ashley’s icy mien as they sit front row at a fashion show in severe black pantsuits, but not their faces, which would matter less if their recognizability—their status as quintessential child stars whose every move since infancy has been documented—wasn’t the point here. Surprisingly, the show’s most captivating work was not a painting but a grid of fifty small colored pencil drawings lining one wall, with sketchlike color studies interspersed among pictures of flowers, animals, and pop cultural icons: Macaulay Culkin clutching his cheeks in Home Alone, the baby floating in a pool on the cover of Nirvana’s Nevermind, Kim Kardashian wailing, Uncle Jesse cradling little Michelle Tanner. The drawings, collectively titled Wild America (2020), appeared less copied than conjured from memory, like fragments of a generational imagination.