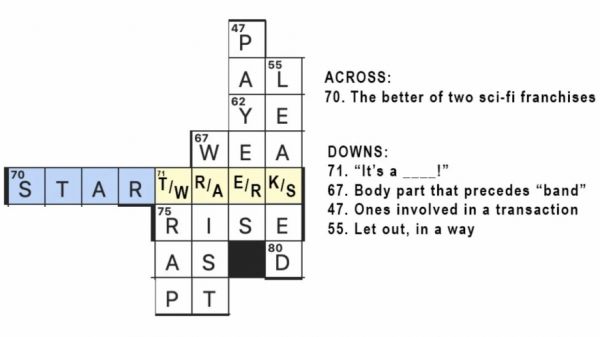 Last week’s Sunday crossword puzzle in the New York Times was called Sci-Fi Showdown. It contained plenty of answers that were references to the worlds of Star Trek and Star Wars. The real kicker was the revealer clue, at 70-across. The puzzle isn’t playing any favorites, as both Star Trek and Star Wars works! The beauty in the scheme is how the down clues work: they had to fit, use either franchise in the answer- meaning they had to be only one letter different, had to be correct with the same clue, and also work with the words going across them.

Trekkies, you’ll find TRAP, WRIST, PAYEES and LEAKED at 71-, 67-, 47- and 35-Down, making your crosses. Star Wars fans, you’ll get different entries that fit the same clues. “It’s a TRAP” can also be “it’s a WRAP”; a “body part that precedes ‘band’” can be a WRIST or a WAIST; “ones involved in a transaction” can be PAYEES or PAYERS; and “let out, in a way,” can be LEAKED or LEASED.

Whether you’re a fan or Star Trek or Star Wars, or both, or neither, and even if you don’t like crossword puzzles, this is pretty mind-blowing. Crossword constructor Stephen McCarthy gets the credit. If you aren’t subscribed to the New York Times, you can find the entire puzzle revealed here. Note the 21-letter answers for 3 and 17 down.  -via Boing Boing