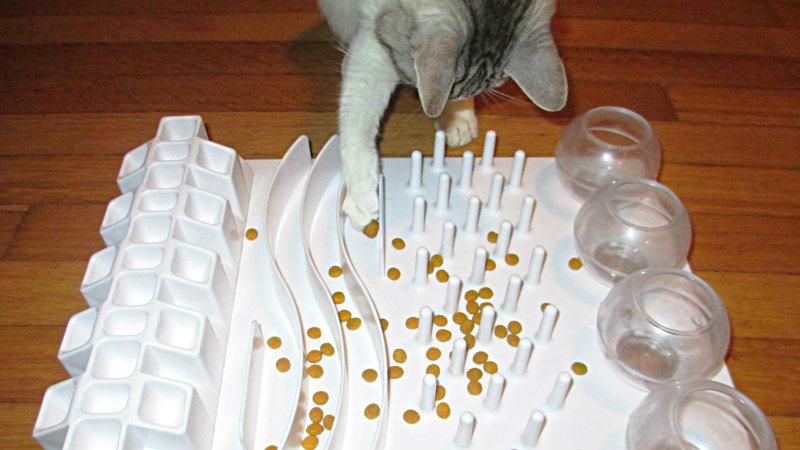 Many animals engage in what behaviorists call “contrafreeloading.” This means that when presented with the opportunity to solve a puzzle and be rewarded with food or get free food for no work at all, animals that engage in contrafreeloading take the puzzle option. Rats, gerbils, mice, chimpanzees, dogs, and other animals demonstrate this behavior.

But not cats. Andy Fell writes for the University of California at Davis:

But not domestic cats. Given the choice, cats prefer eating for free to working out a simple puzzle to get their food, according to a paper by researchers from the UC Davis School of Veterinary Medicine presented this week at a virtual meeting of the Animal Behavior Society.

UC Davis cat behaviorist Mikel Delgado with colleagues Brandon Han and Melissa Bain offered 18 house cats a choice between a food puzzle and a tray of free food. Cats ate more from the free tray and spent more time on the free food, they found.

“It wasn’t that the cats NEVER used the food puzzle, they just used it less, ate less food from it, and typically would eat from the freely available food first,” Delgado said.

Why do some species engage in contrafreeloading and cats don’t? It’s uncertain:

Although contrafreeloading has been known for almost 50 years, there is still no single theory to explain it.

“There are different theories about why animals might contrafreeload, including boredom in captive environments, stimulating natural foraging behaviors, and creating a sense of control over the environment and outcomes,” Delgado said.

It’s also not clear why cats don’t do it — perhaps because it does not simulate natural hunting behavior, she said.

Rating Scientists: Cats Are More Likely Than Other Animals to Be Freeloaders is 5.0 / 5 Votes: 2
Please wait...
Loading...
Related articles