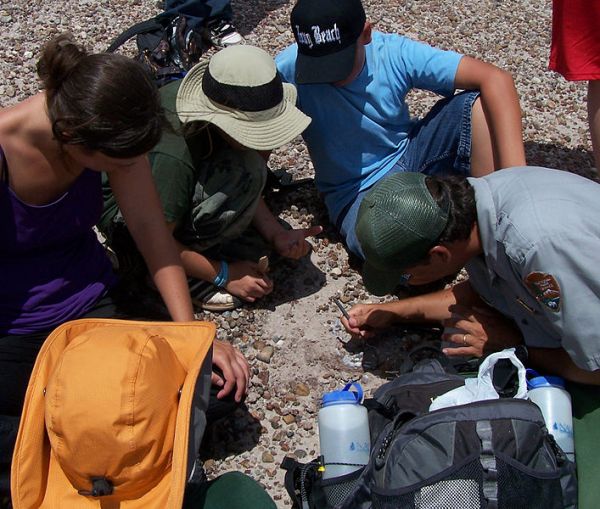 Scientists who study the natural world have to spend at least part of their time in that world. The work can be grueling and uneventful, but spend enough time outdoors and something memorable will happen ventually. Like the time paleontology professor Don Esker and his team were caught in a sudden storm in Montana. Most of the crew hurried to tents (that collapsed) while he was in a van.

After a bit, we started to hear hard *pings* as objects ricocheted off the van, and we realized we were getting hail, steadily increasing in abundance and size. The vehicles rocked ominously and the hail fell, and the wind blew and blew and blew and we were silent. Gradually, the storm abated.

We went out to check on Mason Jane Milam, who had remained in her tent. As we approached, she emerged, smiling ruefully, streaked with green and brown. Her tent was filled with 15 to 20 centimeters of sludge of the same colors. Cow patties had been sent aloft when the storm first hit, blowing them into Mason’s door-less tent despite all her efforts. When the rain came next, it had rehydrated the excrement and turned her tent into a bathtub of bovine sewage.

In addition to bovine sewage, scientists tell us stories of falling off rock formations, negotiating mine fields, dealing with floods and charging bulls, and even finding a crime scene, at Gizmodo.