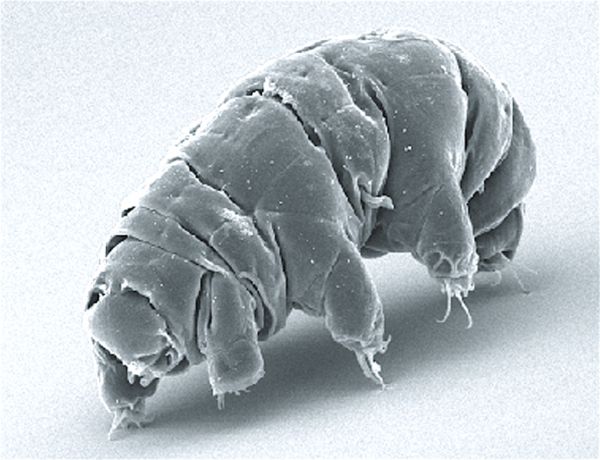 The Panspermia Hypothesis is the idea that life on earth was originally transported here from somewhere else by microbes riding through space on asteroids. To survive such a journey, any life form would have to be pretty tough. The toughest critters we know of are tardigrades, or water bears, which have proven they can survive being frozen and the vacuum of space. But could they survive the impact of colliding with a planet? A team led by Alejandra Traspas at Queen Mary University in London tested how impact-resistant tardigrades are by shooting them from a gun.

For the experiment, Traspas, along with co-author Mark Burchell, took 20 tardigrades of the species Hypsibius dujardini and fed them a (potentially) last meal of mineral water and moss. The well-fed microbes were then put into hibernation—a frozen state in which their metabolism dropped to a mere 0.1% of normal. Groups of two to three individuals were put inside water-filled shafts that were in turn placed inside a nylon cylinder. A two-stage light gas gun was used to fire these cylinders, along with their hibernating passengers, at sand targets inside a vacuum chamber. Six shots were fired at speeds from 1,244 to 2,237 miles per hour (556 to 1,000 m/s), which the scientists measured with laser light stations.

While the experience of tardigrades shot from a gun doesn’t prove anything about billion-year-old single-cell organisms in space, it may be a step in that direction. Read how that experiment turned out at Gizmodo.