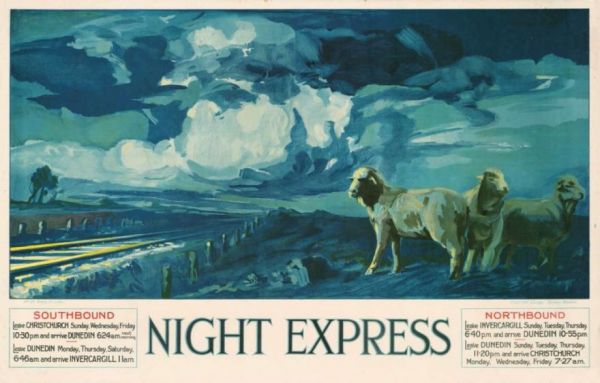 Between the 1860s and World War I, railroads were built to tie the various communities of New Zealand together. They were heavily advertised with beautiful posters under the auspices of Railways Studios, the creative department of New Zealand Railways’ advertising branch. The studio also produced propaganda posters and ads for other products, but the railway posters are their legacy. These travel posters, described as “more beautiful than they needed to be,” are the subject of Peter Alsop’s new book Railways Studios: How a Government Design Studio Helped Build New Zealand.

Alsop and company’s book is filled with many examples of graphic art that flirts with the finer stuff, although the vast majority of its gems lack attribution since most New Zealand Railways posters were signed “Railways Studios,” if they were signed at all. Take the circa 1929 poster created by an anonymous artist, whose assignment was to promote the Night Express, a roughly 24-hour run on South Island connecting Christchurch and Ivercargill. In that poster, above blocks of text detailing the train’s “Southbound” and “Northbound” timetables, we are confronted by a moody, cloud-filled sky rendered in various shades of blue. Beneath this depiction of heaven hovering over earth, a trio of sheep graze in a pasture. Two appear to be in mid-bolt or about to, but one of the animals stands still, facing the other direction. Only by following the creature’s gaze do we see a pair of train tracks, and only then do we notice the tracks are partly illuminated in yellow, presumably by the headlamp of the Night Express, which the artist has cleverly left out of our field of vision. This is a great painting, no matter what it was selling.

Read about Railways Studios’ work and see some fine examples at Collectors Weekly.