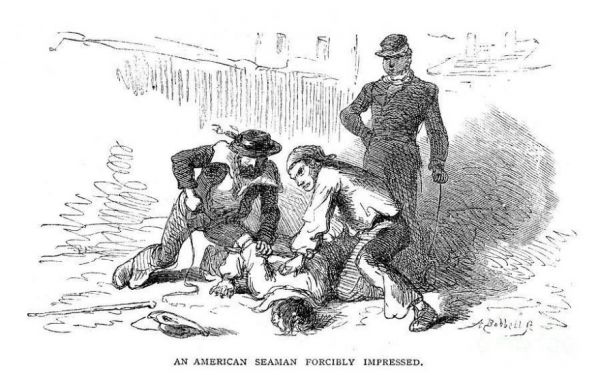 In the era of sailing ships, the 16th through the 19th centuries, ships couldn’t recruit enough men to stay at sea for months earning low wages and eating hardtack, so they shanghaied them. That was the term for kidnapping sailors, possibly because Shanghai was the destination for many of them. Agents called “crimps” in America could make good money providing hands for ships, whether they were willing or not.

The most straightforward method for a crimp to shanghai a victim is to render him unconscious, often by drugging his drink but a blow to the head works equally well, then forge his signature on the ship’s articles during the time of delivery to the ship’s captain. If the unconscious victim is not known to the crimp, a name would be invented. It was not uncommon for an unwilling sailor to wake up at sea and find himself with a new name.

The crimps made good money from shanghaiing. A well-run operation could fetch as much as $9,500 per year in 1890s dollars, equivalent to about a quarter million dollars in today’s money. Aside from the fee, the crimp also collected, on behalf of the men he shanghaied, the two months advance pay that was allowed before a trip so that sailors could pay off debts and prepare themselves for the trip. It was a very lucrative enterprise.

Read about several crimps and their notorious methods of shanghaiing sailors, including one incident where money was collected for sailors that were actually delivered dead, at Amusing Planet. -via Strange Company