“Love thy neighbor” might sound great on paper, but it’s gosh darn difficult to put into practice. Especially if you happen to have barely anything in common and prefer to keep to yourself. “Good fences make good neighbors,” indeed. Sometimes, no matter how polite someone is, others just prefer to be left alone.

One redditor asked the AITA subreddit for their opinion about a bit of neighborly drama that she had recently gotten into. Having lived in her neighborhood for over half a decade, the woman noticed someone new move in down the street, a full-time mom of three.

The chatty new neighbor, who had polar opposite political opinions, really tested the introverted redditor’s patience, and she shared exactly what happened next. Check out the full story below and let us know who you think was in the wrong. What would you have done differently? Meanwhile, tell us about how well you get along with your neighbors in the comments, Pandas. Do you prefer simply nodding and saying a quick ‘hi’ or do you go over to borrow some salt and talk about the weather in great detail?

Bored Panda wanted to understand whether total honesty’s always the best way to go when talking with one’s neighbors, so we reached out to Suzanne Degges-White, Ph.D., a Licensed Counselor, Professor, and Chair at the Department of Counseling and Higher Education at Northern Illinois University.

A woman, who likes to keep to herself, asked the AITA community if she was wrong about how she dealt with a chatty new neighbor 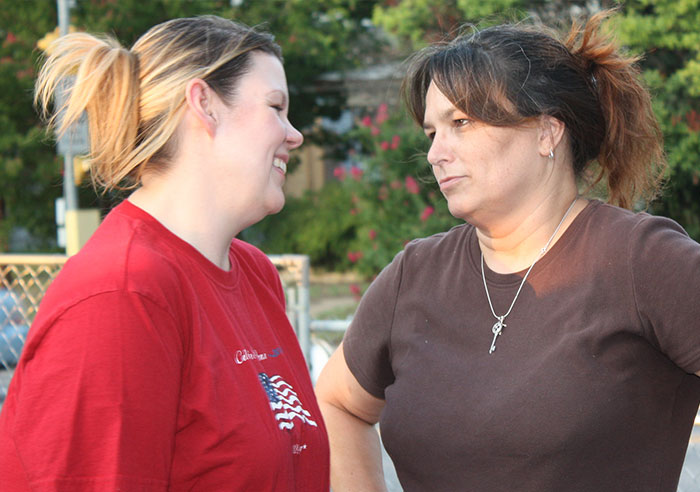 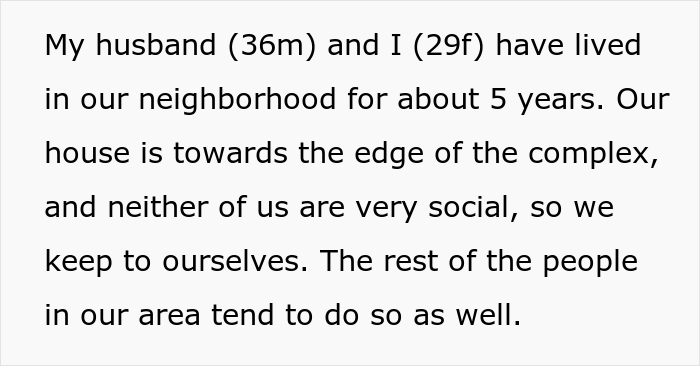 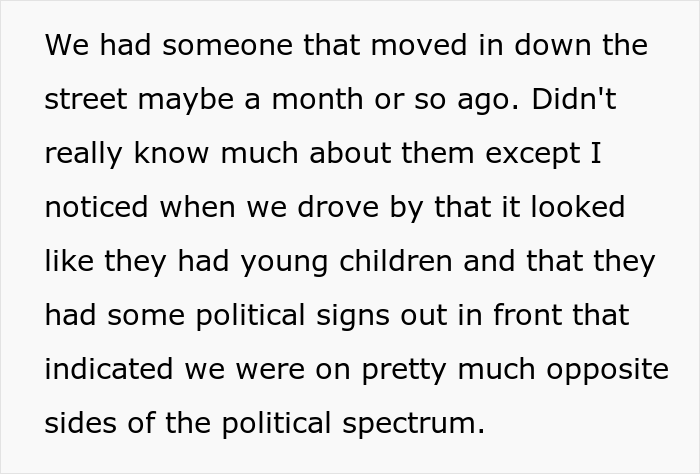 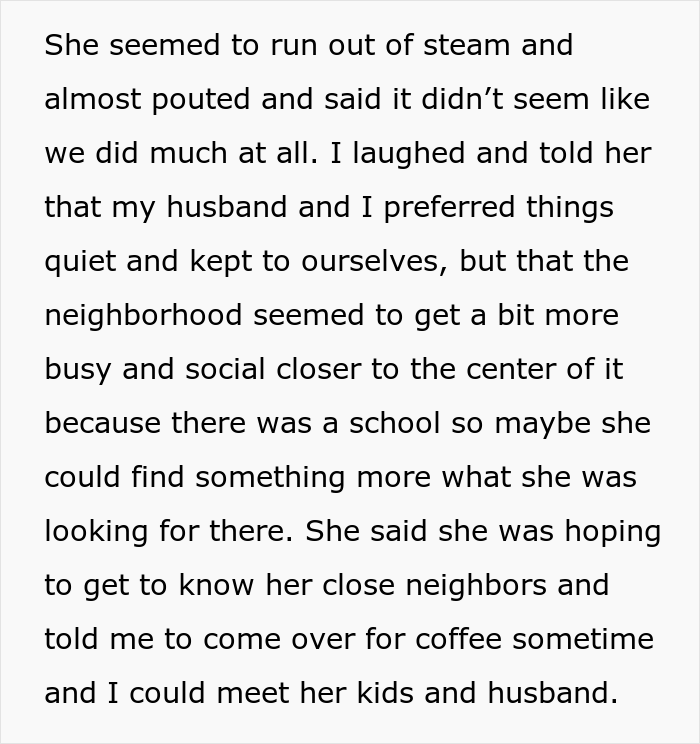 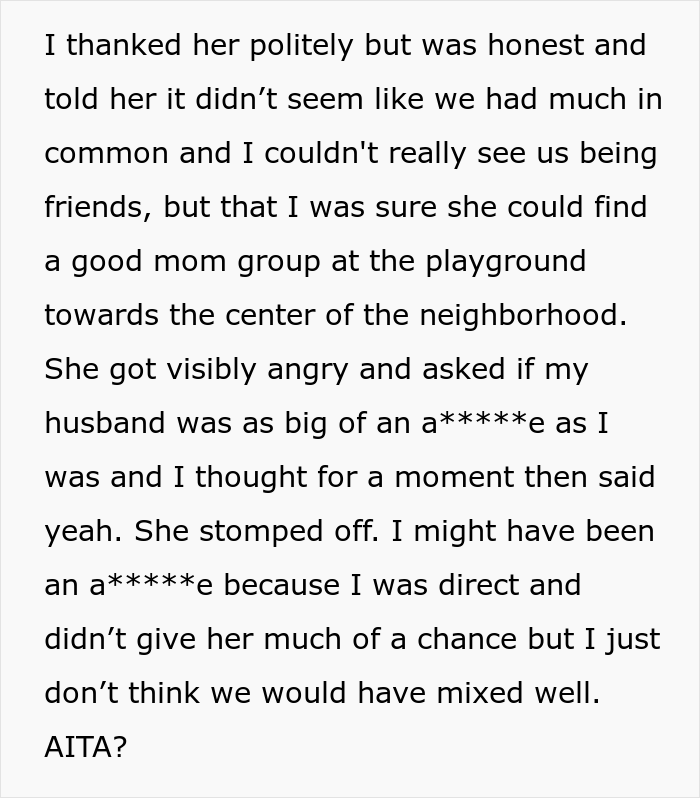 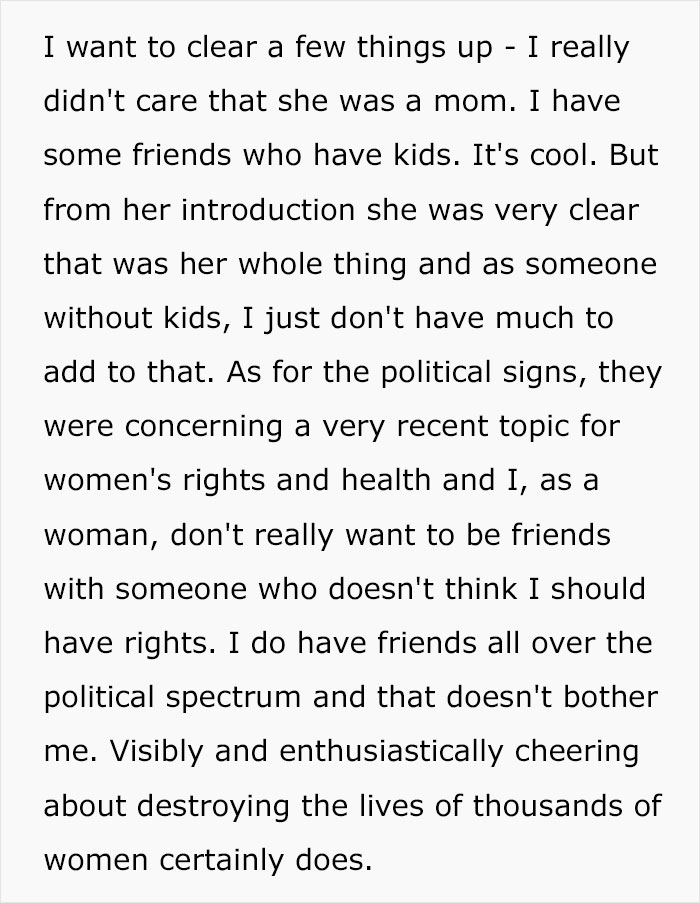 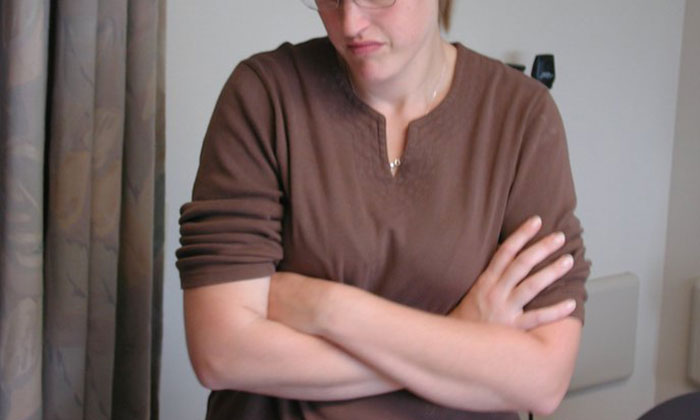 She explained to us that even though honesty is the best policy as a rule, “sometimes a person’s efforts at honesty come off a little too ‘brutal’ and feelings are hurt and relationships damaged, and no greater good is served.” Being a tad more emotionally tactical when speaking to an overly chatty neighbor can help them become more aware of themselves and may help avoid tension down the line. It’s also best not to outright tell someone you don’t want to be their friend.

According to Professor Degges-White, from Northern Illinois University, depending on the situation, telling a white lie or opting for a gentle let-down is a better option.

“The ‘new neighbor’ may be blind to the effect her chattiness is having on others and perhaps a little gentle feedback might actually help the neighbor grow in self-awareness and become a better neighbor,” she explained the potential pros of a more diplomatic approach.

“Bluntly saying that you don’t ever see yourselves becoming friends may leave a bad taste in the neighbor’s mouth and the acrimony that results might last for a long, long time,” the psychology expert told Bored Panda.

“Another important consideration is that neighbors can impact our home lives in significant ways! You don’t want to have poor relationships with people you’re going to be in close proximity to each and every day. That’s added stress no one needs, given the amount of stress that we’re all feeling after the last couple of years due to world events!” the professor pointed out that nobody needs that kind of additional stress in their lives.

Professor Degges-White shared some ways that you can tactically withdraw if a neighbor doesn’t know when to stop speaking.

“When a neighbor wants to chat too long at the garden fence, just make up reasons that you’ve ‘got to run.’ If their chattiness is interrupting a peaceful evening in your backyard, let the neighbor know that ‘it’s been a stressful day and I’m just out here for some peace and quiet,’ or something along those lines,” she said how we can drop a gentle hint that we need some privacy.

“If you really just need to tell your neighbor that you ‘don’t want to be her friend,’ which sounds very grade-schoolish, you can share something like, ‘I appreciate your friendliness and am glad to hear that you like our neighborhood.’ Then just head inside or just turn your back and get on with whatever you’re doing. Hopefully, the new neighbor will get the message, but by choosing not to engage, you’re making your boundaries clear.”

It takes a keen emotional intelligence to figure out whether a dash of complete honesty is better than being diplomatic in a particular interaction. Whatever the truth might be, sometimes, it pays off to phrase things in a roundabout way. Though, at other times, people really need to hear exactly what you think.

It all depends on the situation and who you’re dealing with. Someone who’s a bit more vulnerable might prefer you to be slightly more tactical in order to spare their feelings. Though other people simply don’t get the hint or misinterpret politeness for ambiguity.

Would the world be a better place if everyone told the truth, the whole truth, and nothing but the truth? If you haven’t yet, you might want to watch the movie ‘The Invention of Lying’ about a universe where nobody has ever lied. It really isn’t the utopia you might think it is.

According to a study conducted by Pew Research, there’s a generational difference in how social people are with their neighbors, at least in the United States. Americans 65 and over are more likely to know who their neighbors are, compared to young’uns.

The numbers are, well, staggering. A whopping 57% of respondents said that they know only some of their neighbors. Meanwhile, a paltry 26% said that they know most of the people living near them. In short, more people tend to want to keep to themselves in this day and age.

However, it isn’t the end of the world. In this era of modern communications, the Americans who know at least some of their neighbors, prefer to converse with them face-to-face, rather than via phone, email, or text. And there’s quite a bit of trust between them, too. Pew notes that 66% of the folks who know at least some of their neighbors would feel completely comfortable leaving their house keys with them for emergencies. Now that’s some real trust right there. Could you say the same for someone in your own apartment block or neighborhood, Pandas?

Unfortunately, the majority of Americans have never gotten together with their neighbors at parties, whether big or small. And, according to the study, it seems like those living in the rural US are more likely to know everyone living near them. Ironically, they’re also more likely to keep to themselves. 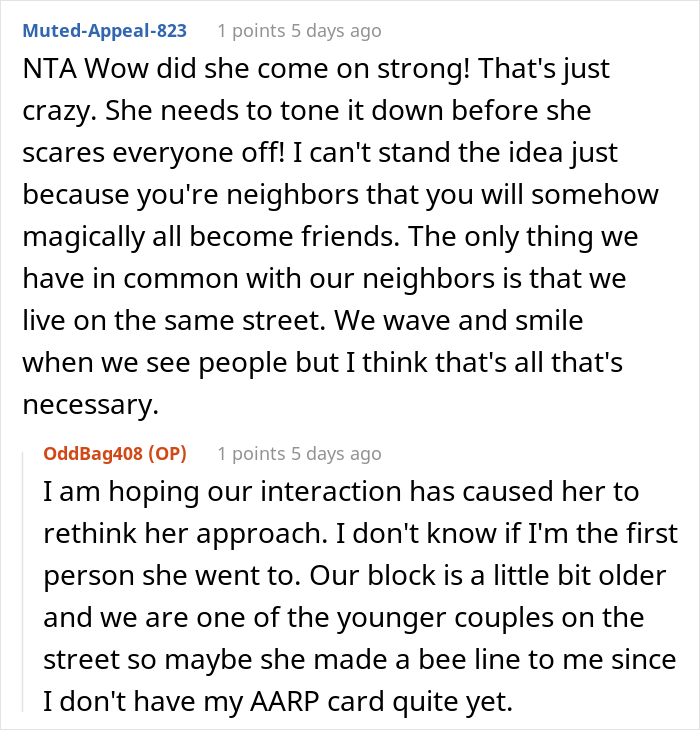 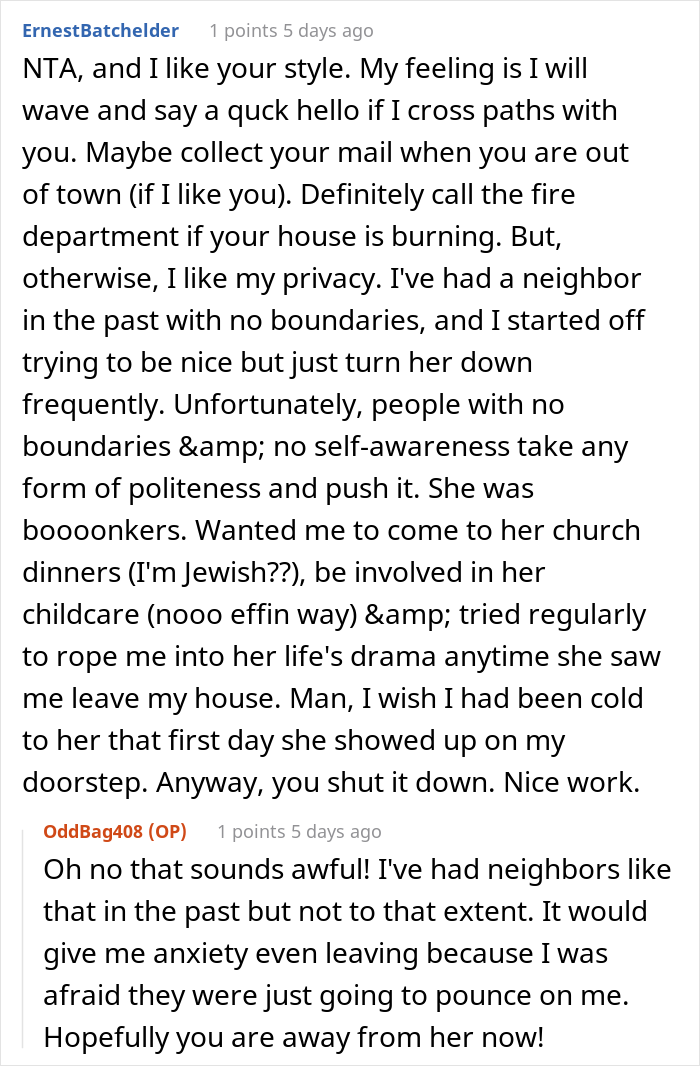 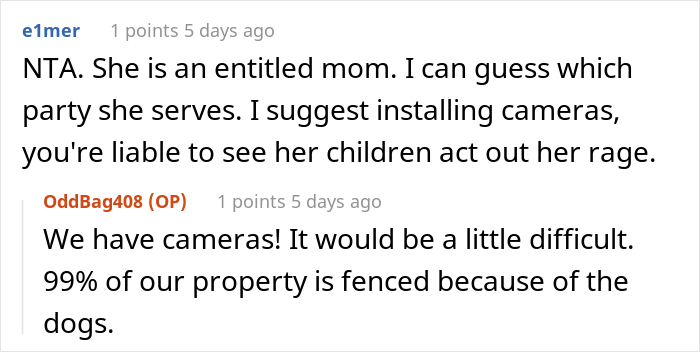 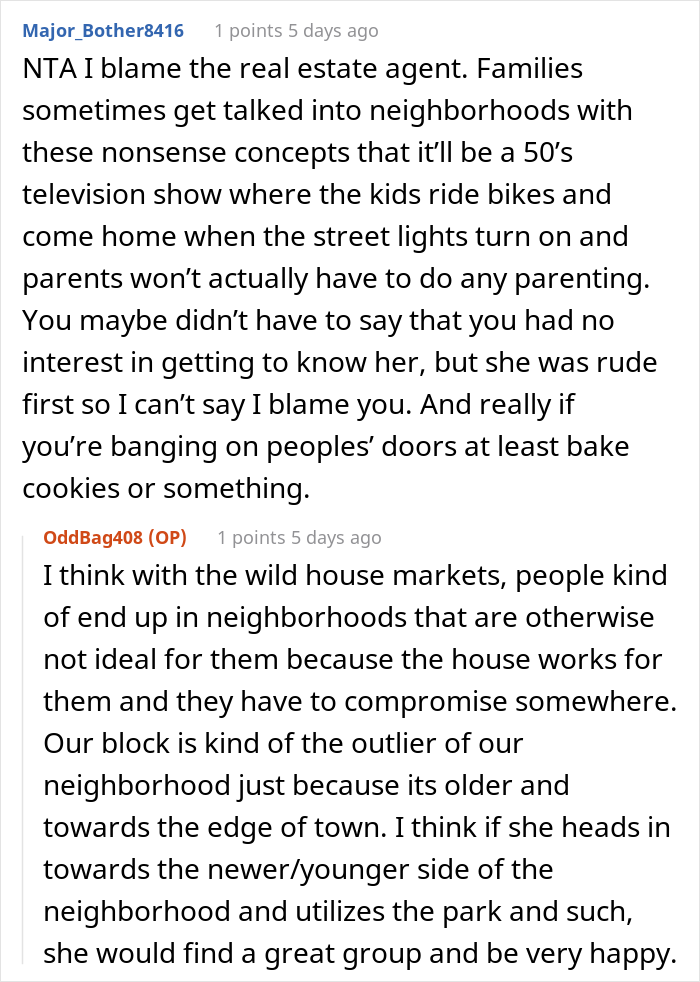 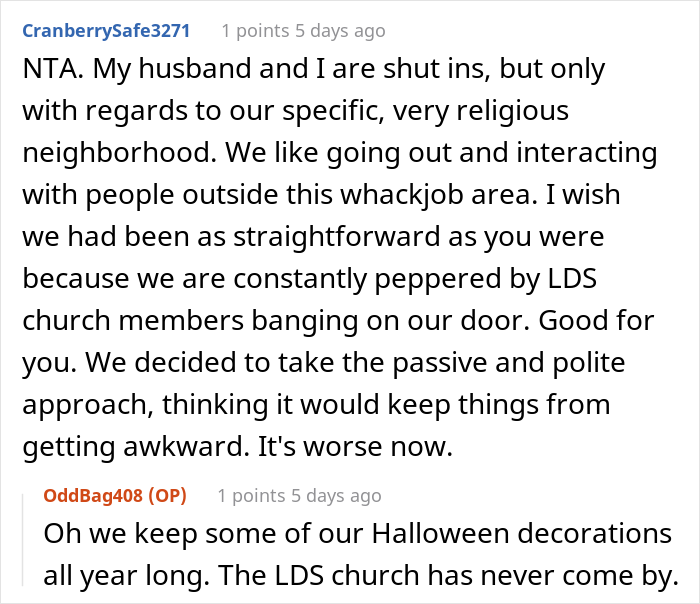 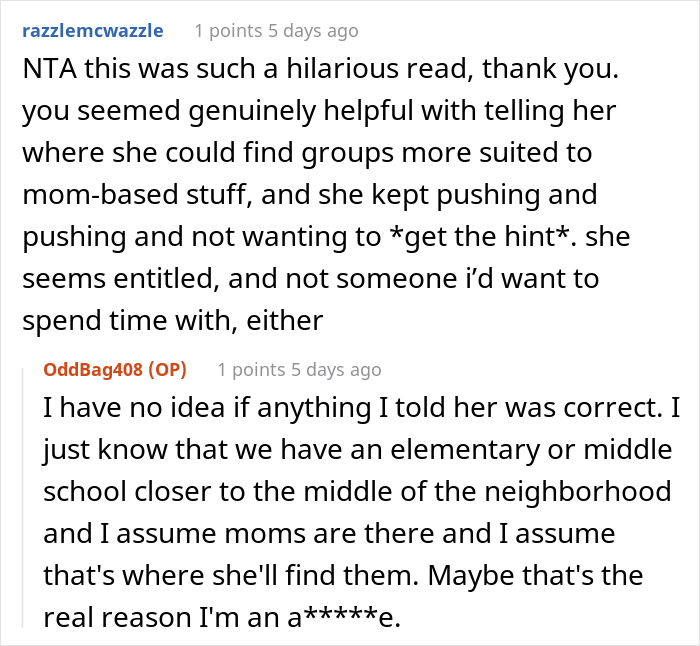 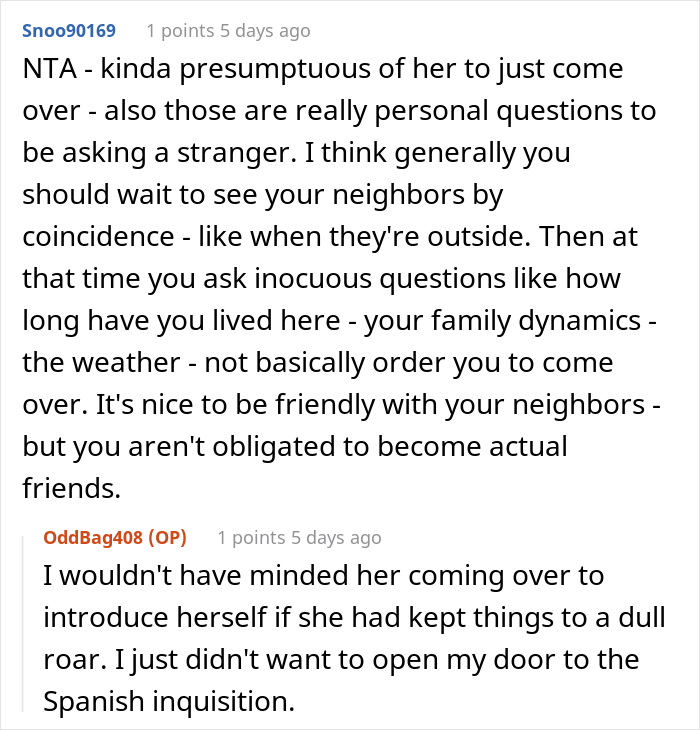 The post “She Got Visibly Angry And Asked If My Husband Was As Big Of A Jerk As I Was”: Woman Told New Neighbor She Doesn’t Want To be Friends first appeared on Bored Panda.