In life, there are situations where there are no clear answers. One of the things you can do when you feel completely lost is to ask the internet for help, hoping that someone will give you a completely new perspective or share a piece of advice that will suddenly make everything make sense. Many redditors turn to the AITA online community for a verdict about difficult and emotional situations.

Recently, redditor u/Clerxudehuntemu asked for the subreddit’s opinion about whether he was wrong to want to bring back his 12-year-old cat, Bubba, to live with him. His wife, who had a late stillbirth, was set against having Bubba back, and they had a fight. You’ll find the redditor’s full story, and how the internet reacted to it, below.

This topic is extremely sensitive and some of you Pandas may find reading about it difficult. Bored Panda has reached out to u/Clerxudehuntemu via Reddit for comment.

Having to give your beloved pet away is a difficult decision 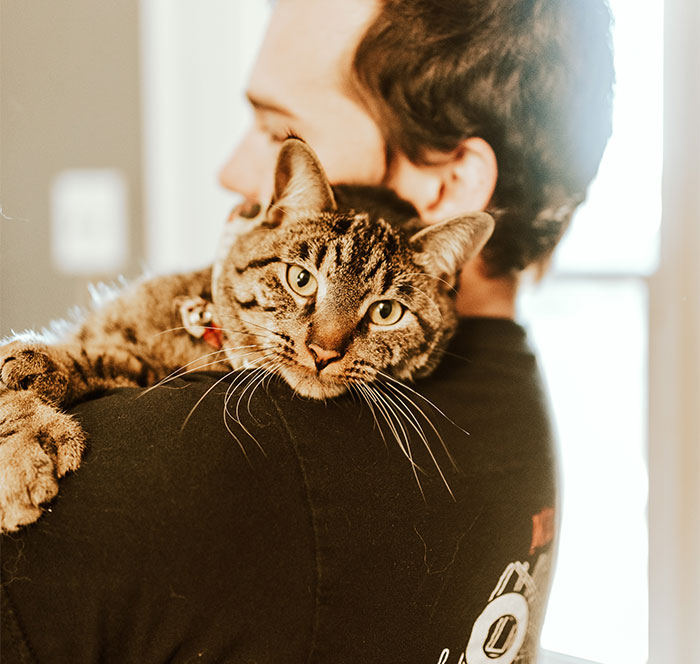 A man shared how he and his wife argued over bringing his cat, Bubba, back home after a tragedy in their family 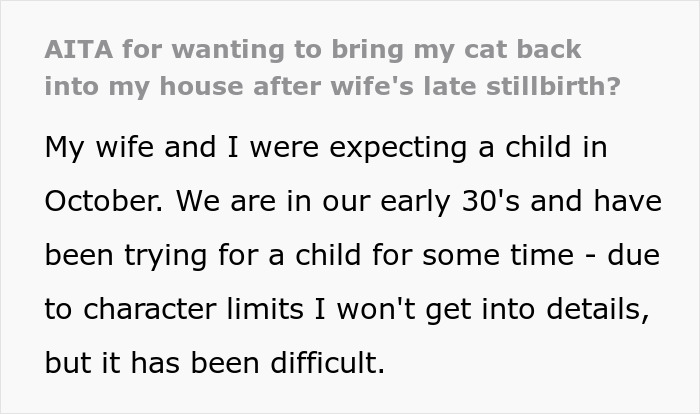 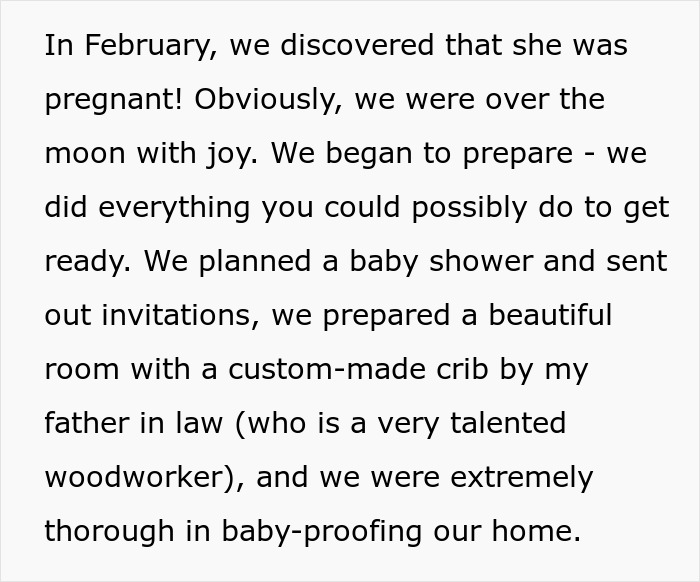 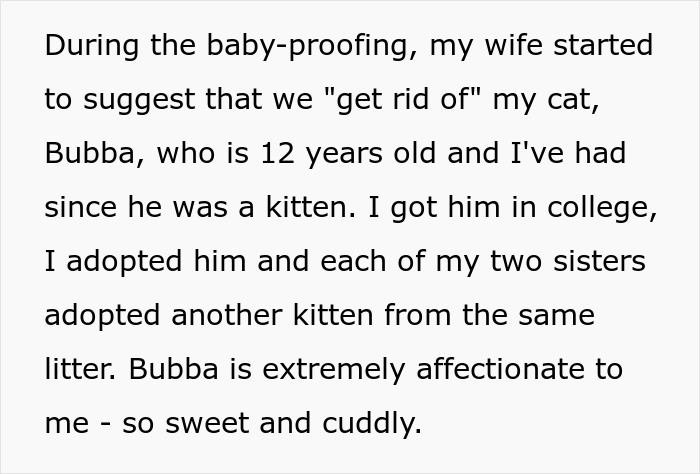 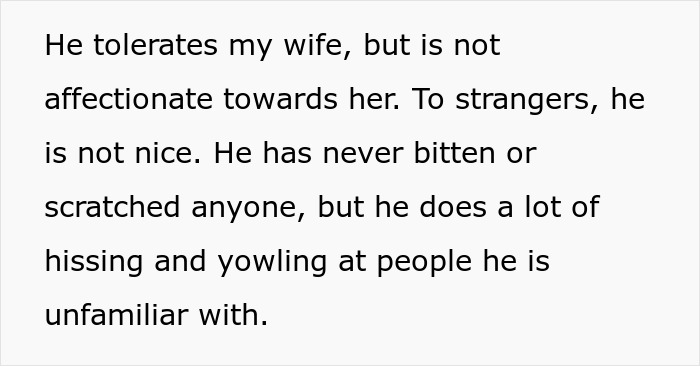 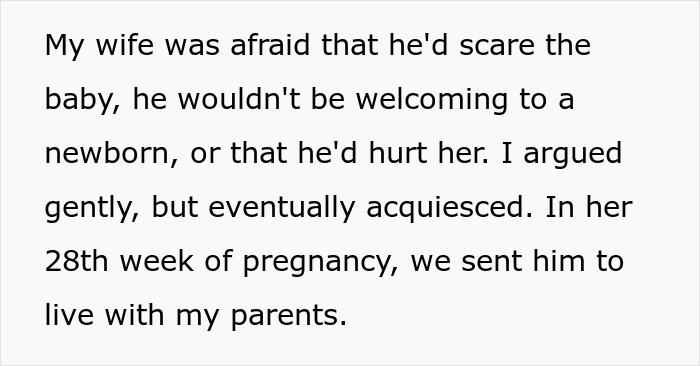 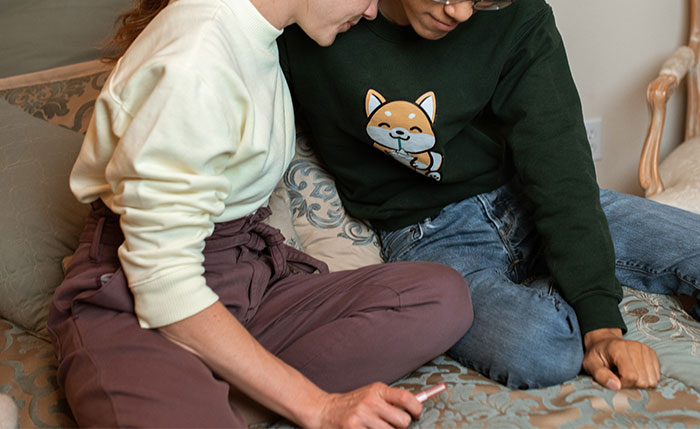 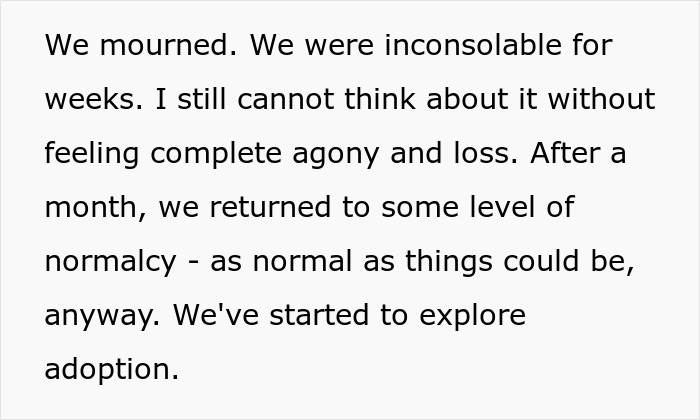 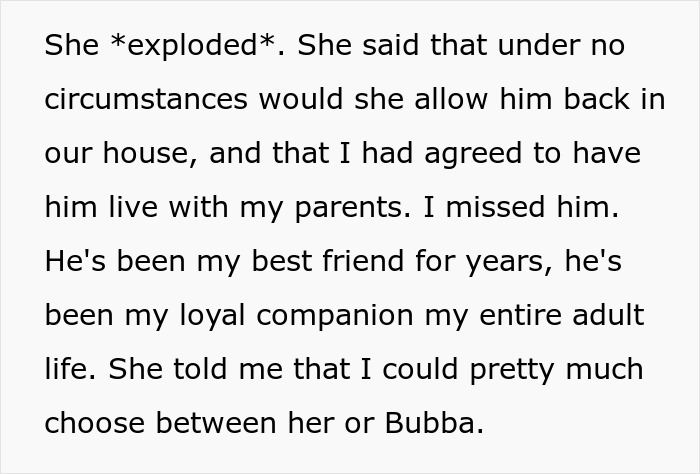 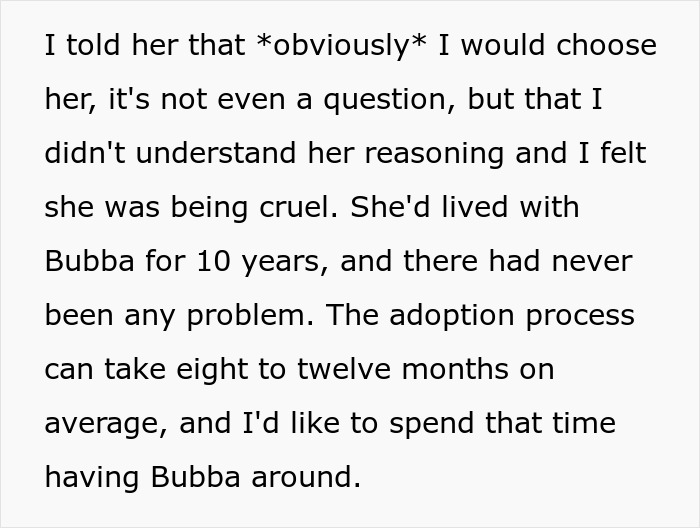 Our pets are our best friends, through thick and thin. It’s unimaginable that we’d someday have to give them up, voluntarily. The only reason might be for the sake of someone we love with all of our heart, as in the case of u/Clerxudehuntemu. He gave Bubba the cat away to his parents when his wife asked him to do so after getting pregnant.

“Bubba is extremely affectionate to me—so sweet and cuddly. He tolerates my wife, but is not affectionate towards her. To strangers, he is not nice. He has never bitten or scratched anyone, but he does a lot of hissing and yowling at people he is unfamiliar with. My wife was afraid that he’d scare the baby, he wouldn’t be welcoming to a newborn, or that he’d hurt her. I argued gently, but eventually acquiesced,” the author of the post explained.

“Tragically, my wife and I lost our child just weeks before she was due. We still don’t have a lot of answers, and it’s painful to get into. We mourned. We were inconsolable for weeks. I still cannot think about it without feeling complete agony and loss. After a month, we returned to some level of normalcy—as normal as things could be, anyway. We’ve started to explore adoption.”

The adoption process takes a long time. So, the redditor wanted to bring his pet back home during that period of time. “I missed him. He’s been my best friend for years, he’s been my loyal companion my entire adult life.” However, his wife was firmly set against this and they had an explosive argument. This prompted the OP to ask the AITA community for their advice. He wasn’t sure whether or not he was wrong to want his cat back home, even though he’d obviously choose his wife if he was ever forced to pick between the two of them.

The AITA subreddit was very supportive of the OP, and tried to be as sensitive as possible about the married couple’s situation. Some redditors suggested that his wife is likely still grieving, and she still needs time to process what happened.

Everyone grieves differently. And we cannot expect everyone to grieve at the same pace. This is what psychotherapist Silva Neves explained to Bored Panda during an earlier interview.

“Some grieve with a lot of crying and others grieve with being practical, and anything else in between. Not seeing any tears does not mean that people are not grieving. The process lasts as long as it needs to last, there is no time limit. Usually, grieving diminishes over time, which means that people become less and less upset over time, but some people will never ‘recover’ from grieving, especially those who lost a very important person. Most people learn to live with grief and sadness. Significant dates, such as anniversaries, may always be painful,” he said.

“Although there are some common knowledge about grief, such as ‘stages of grief’, a lot of people don’t follow ‘stages’ of grief because grief can be messy and unpredictable. The best way to support someone who is grieving is by sitting with them, listening to them and that’s it,” the psychotherapist noted.

“It is also important not to tell people ‘I know how you feel’ because grieving is so unique, nobody can know what another person’s grieving feels like, but perhaps we can imagine how painful it is. A lot of people get a lot of support with grief at the beginning of the loss, but often people stop talking about after a while,” the expert told Bored Panda earlier. 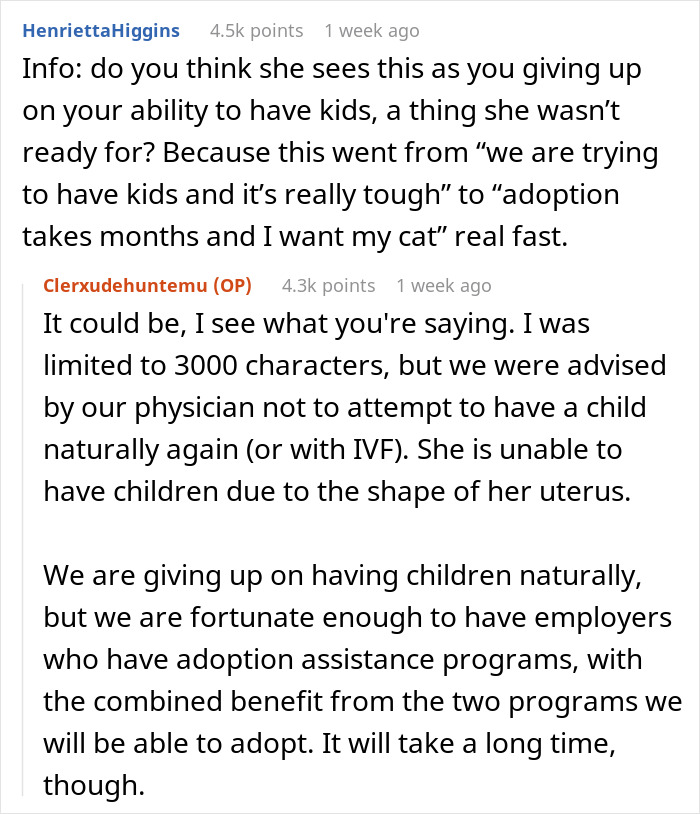 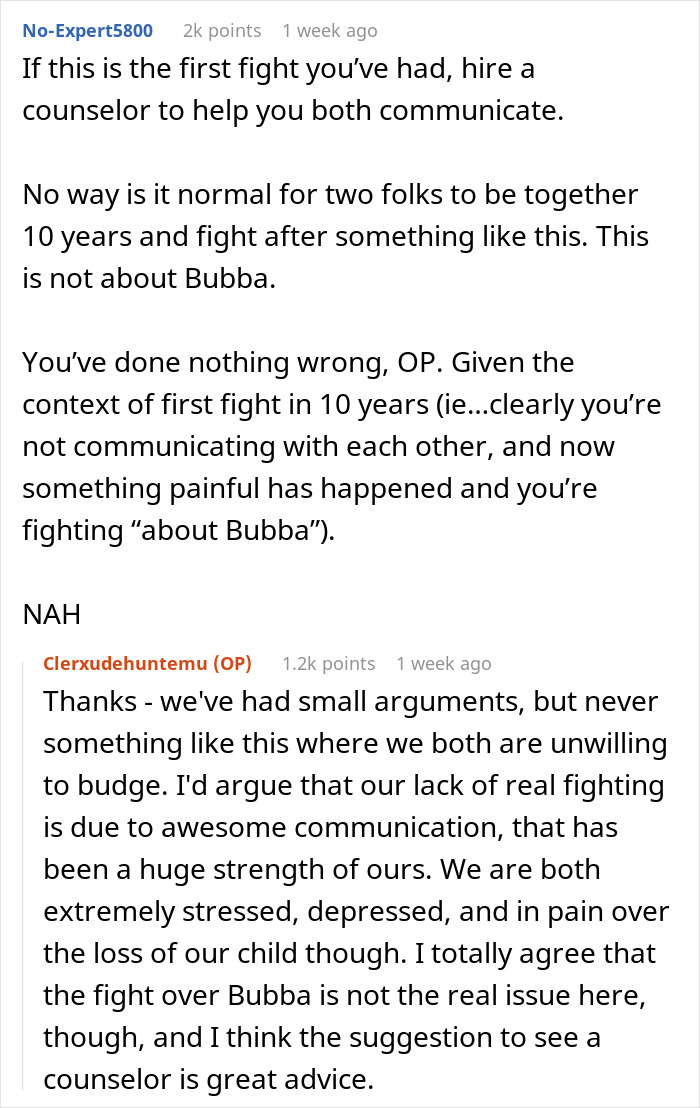 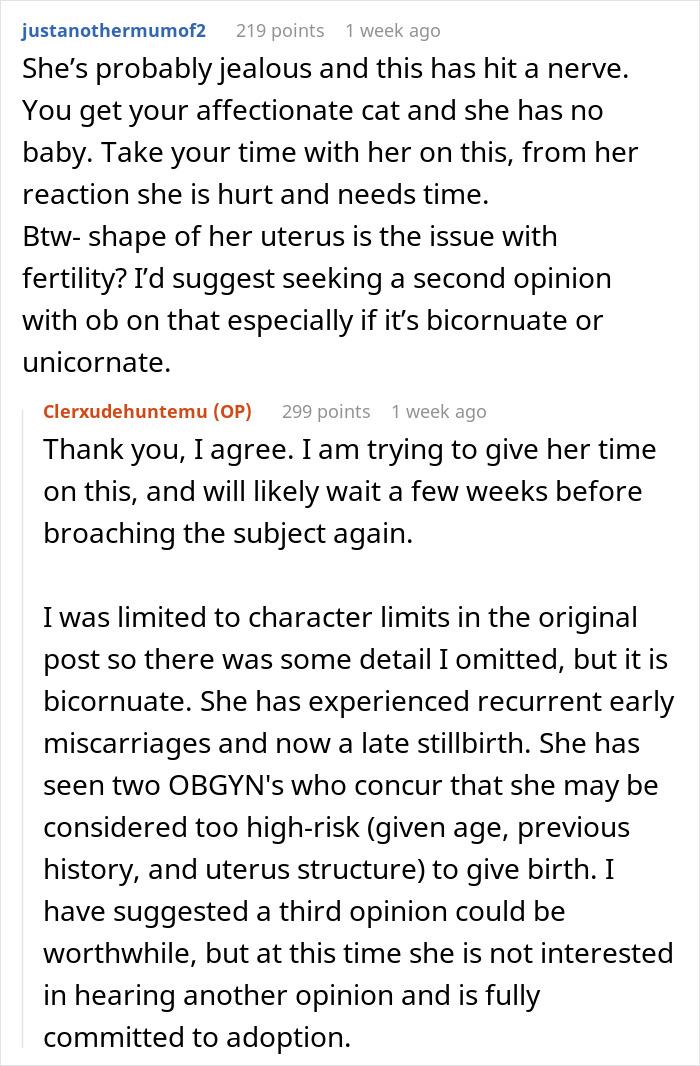 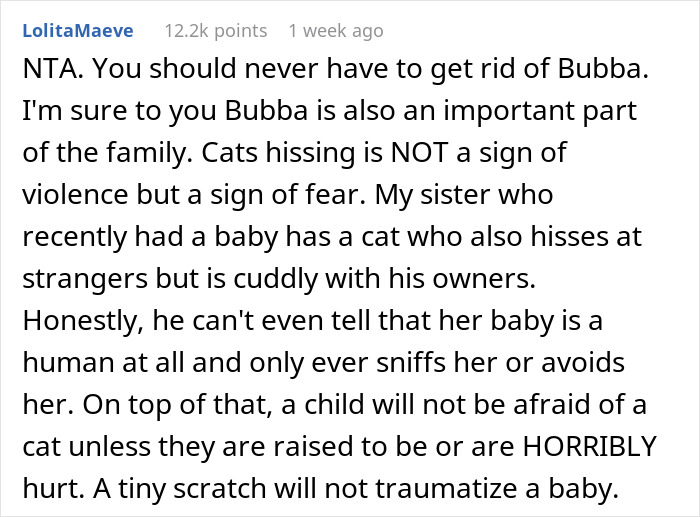 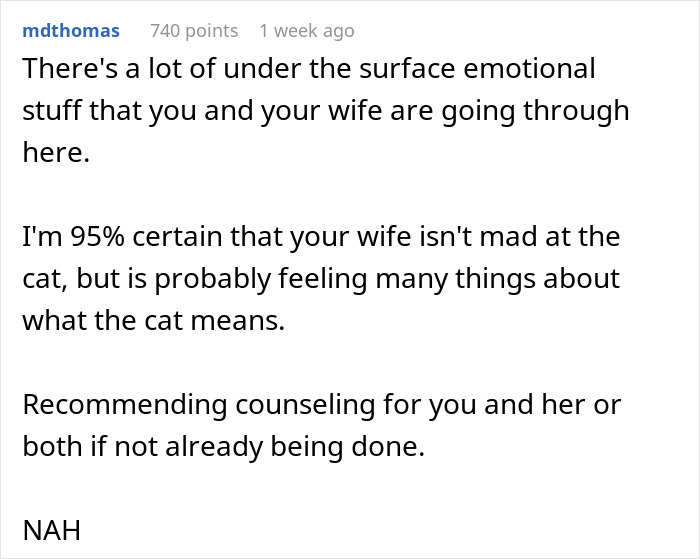 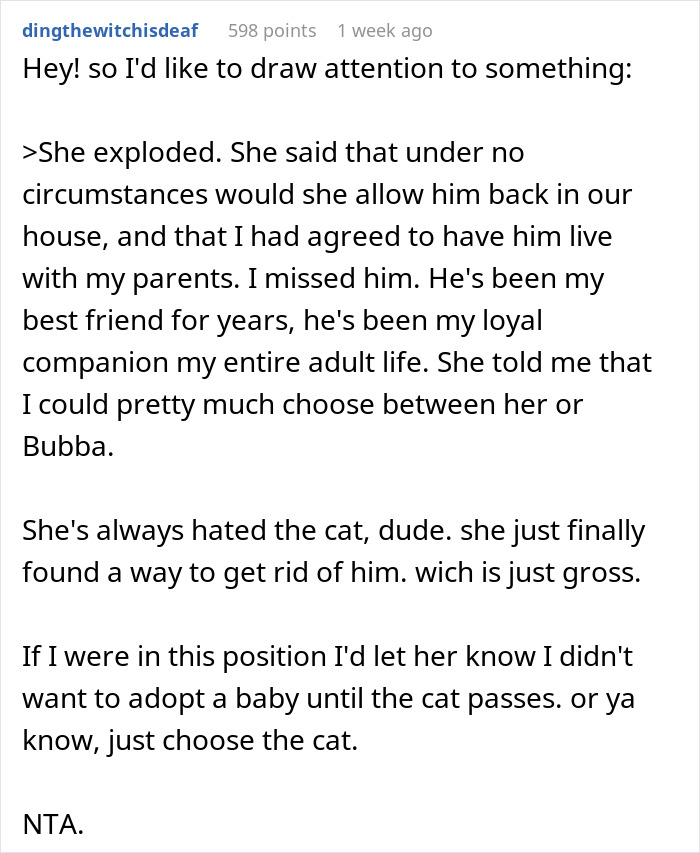 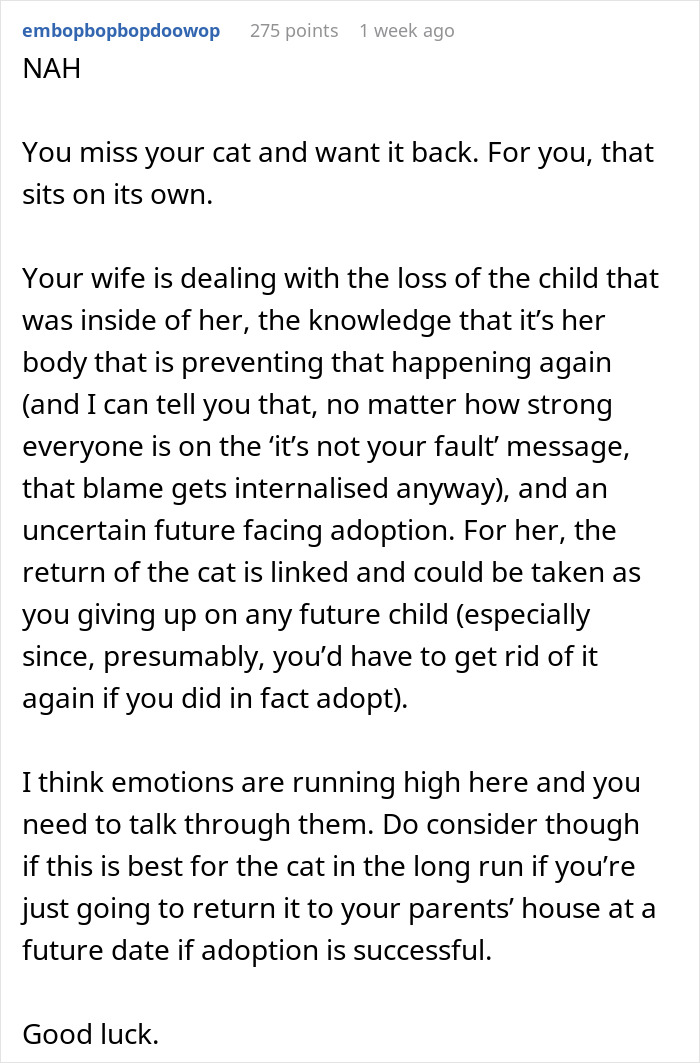 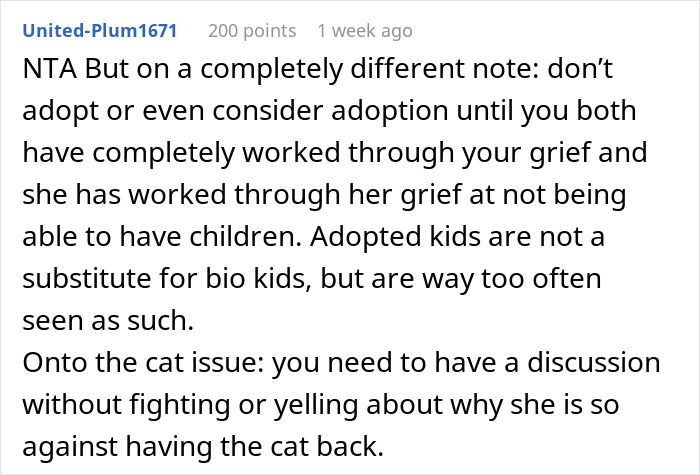 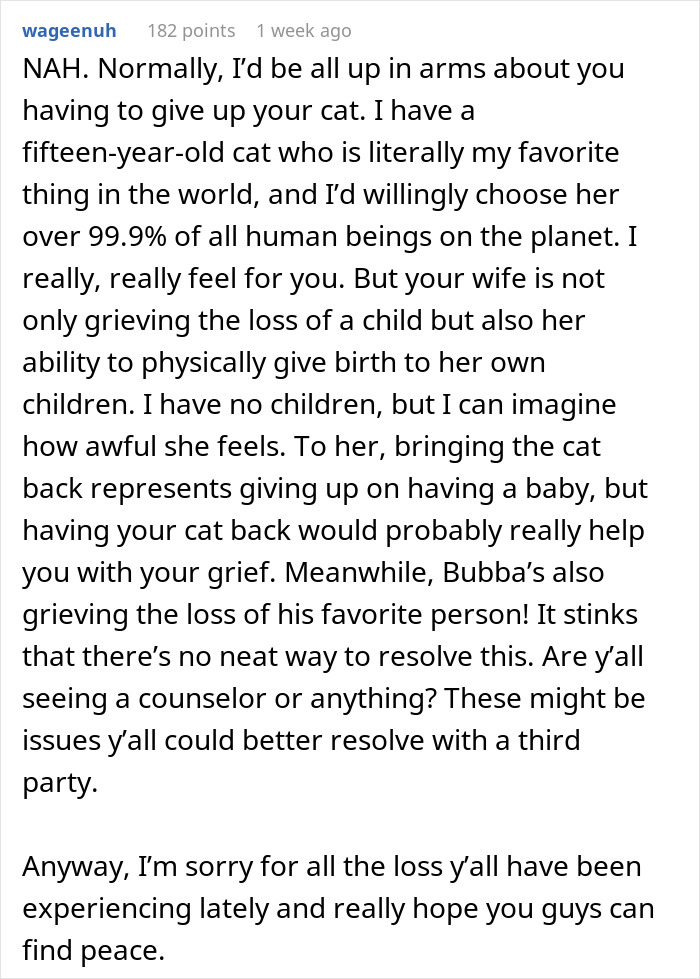 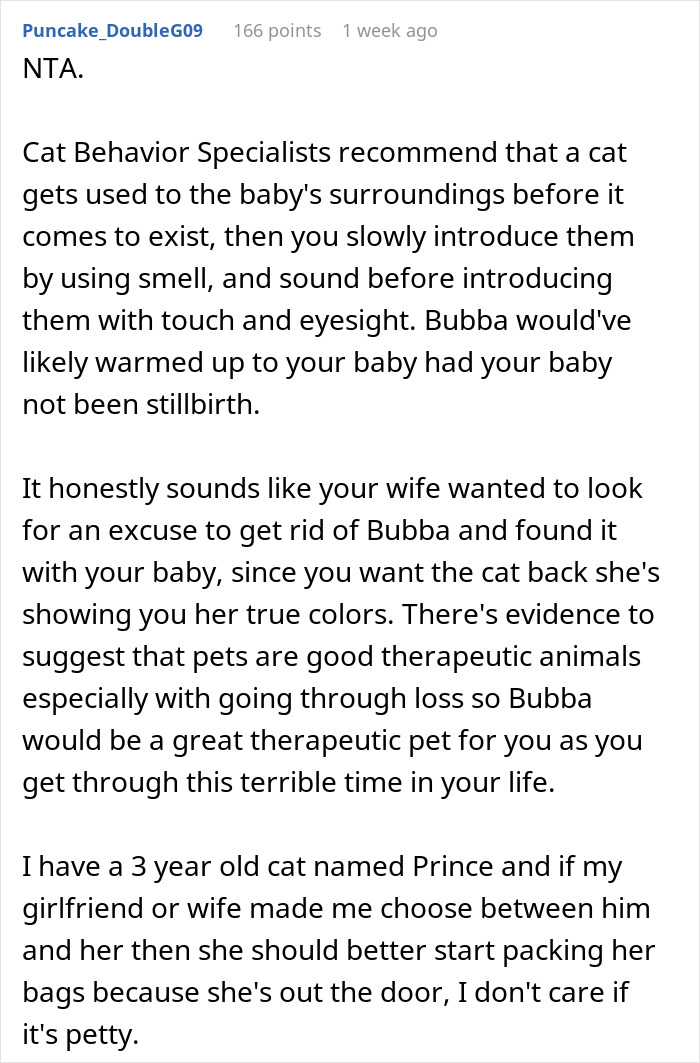 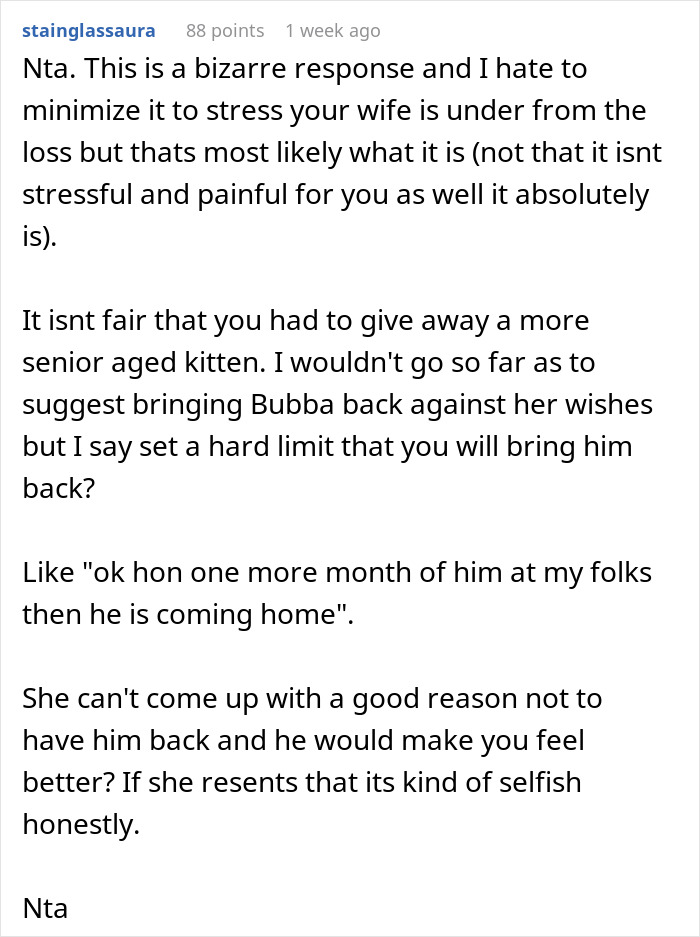 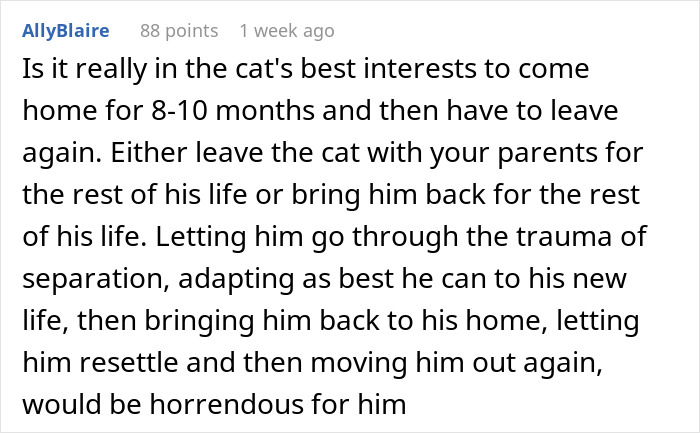 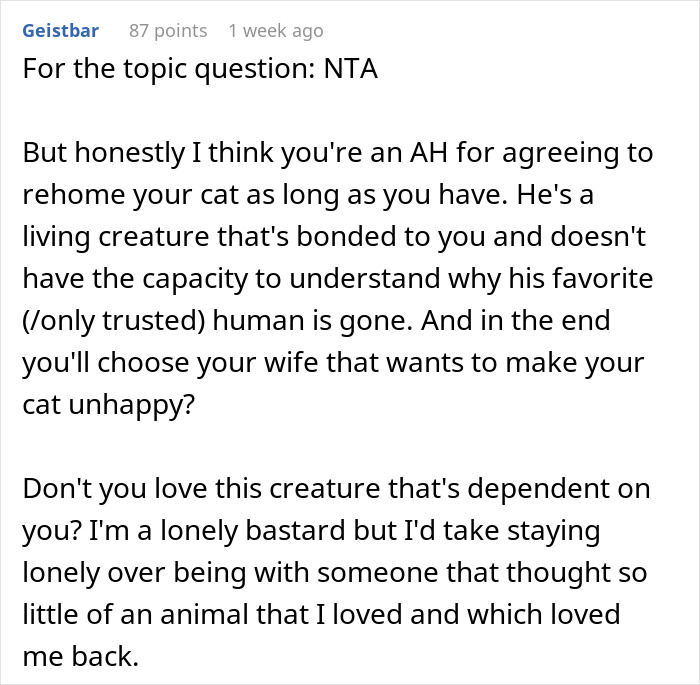 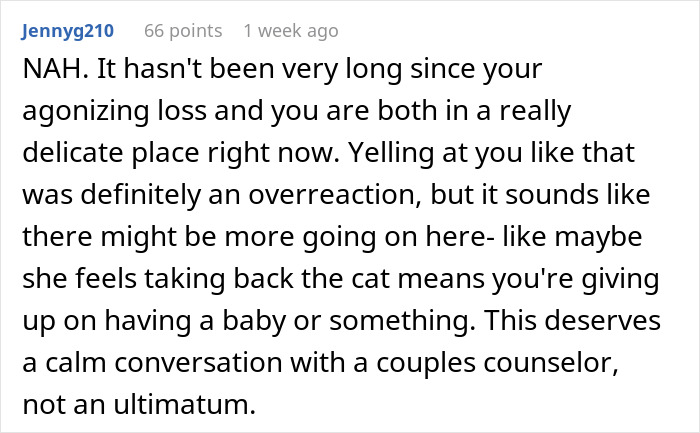 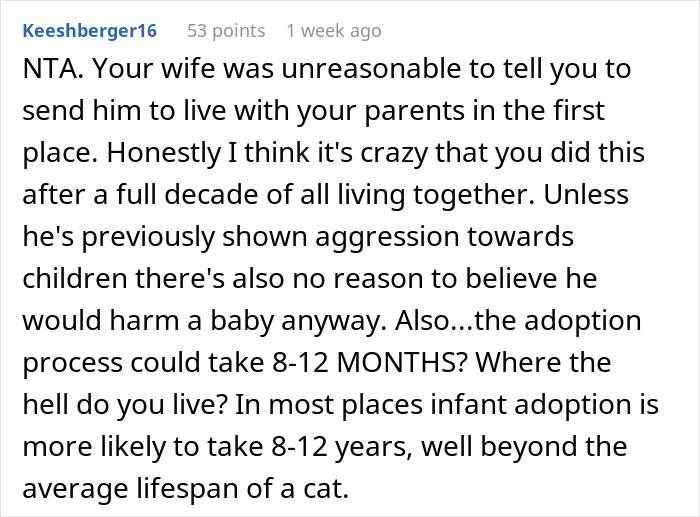 The post “She Told Me That I Could Pretty Much Choose Between Her Or Bubba”: Man Asks If He’s Wrong To Want His Cat Back At Home After Wife’s Stillbirth first appeared on Bored Panda.