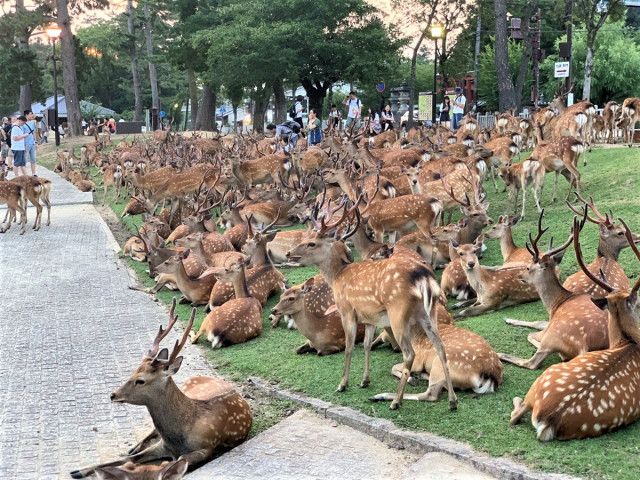 Nara Japan, is famed for its large population of free-roaming deer, where some of them get up close to tourists to get some of their tasty rice crackers. During the summer, however, you’ll find the deer casually sitting in a particular spot in Nara Park. SoraNews24 detailed this deer summer gathering turned phenomenon, aptly called shikadamari (“deer gathering spot”):

around 6:30 p.m. in the evening, deer had come from around Nara Park to settle on this particular location, opposite the Nara National Museum, which is located in a corner of the park. most baffling about the occurrence is the fact that they come together to sit at the same spot at the same time each day, and for the same amount of time as well.

The deer gathering begins at around 6:30 p.m. and reaches its peak just before 7:00 p.m. The deer sit quietly together, and then, after 7:00 p.m., they stand up and go back to different areas of the park.

A whopping 623 animals at the gathering spot. One of the most plausible explanations for this phenomenon is that the deer come to this particular spot to cool down. After all, there appears to be a large vent in the vicinity, which may provide the animals with some cool air.