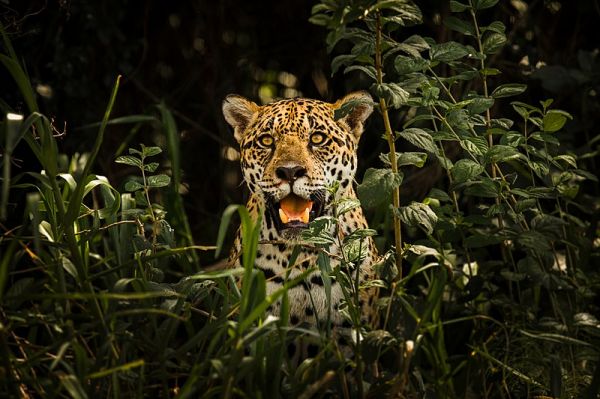 When we think of jaguars, we picture them in the Central and South American rainforests, which is where 99% of them live. But at one time, jaguars roamed through the southern US, from California to Louisiana and even beyond. A government-backed campaign of eradication wiped them out in the first half of the 20th century. There are some jaguars in Mexico, where a preserve has been set aside for them, and occasionally one of the cats moves into the US. Solitary male jaguars wander a large territory, and there are two of them suspected of living north of the US border as of now.

Some conservationists believe the US should welcome jaguars back. We know from our experience with wolves that re-introducing apex predators will improve an ecosystem from the top down. Expanding the range of jaguars will also improve the species’ chances of survival in the long run. One plan is to bring jaguars in from Mexico and Argentina to live in the Central Arizona/New Mexico Recovery Area (CANRA), a 20-million-acre area owned by Native American tribes and the federal government. Other conservationists believe it would be better to support the jaguar population in the Mexican preserve and encourage them to cross into US territory on their own.

There are people opposed to both plans. Some are concerned for livestock and other wildlife. Some believe it to be a waste of money and resources. And some jaguar fans believe that the US is just too dangerous for the cats in the 21st century, between fences, highways, hunters, and poorly-managed habitats. Read about the controversial plans for re-introducing jaguars to the US at Vox.