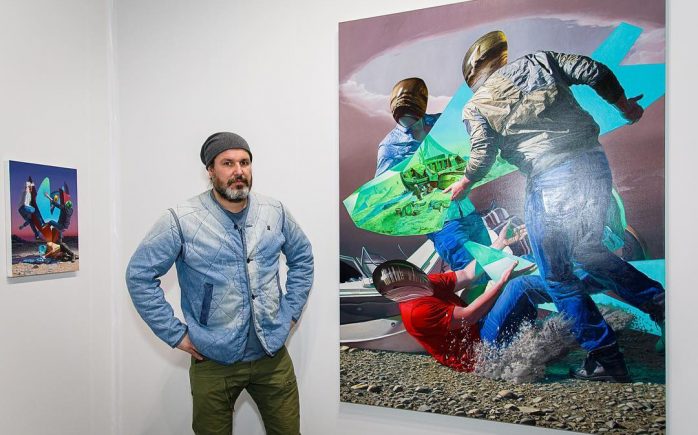 With Armory Week 2018 being in full swing this weekend in NYC we keep getting reports of new shows, releases, openings and some interesting behind the scene stories from the fairs. One that is getting a lot of attention is the sale of Jean-Pierre Roy‘s painting from Aporetic Sequence show/booth with Gallery Poulsen at Volta NYC.

The NYC-based artist has been preparing this particular body of work for over half of year now, which resulted in nine oil paintings comprising a unique narrative that plays out over each canvas and onto the next. Depicting dynamic post apocalyptic scenes of conflict and tension, these futuristic images are references to the artist’s upbringing in LA and the contrast between the overall tranquility and the frenzy of the urban megalopolis. Created with meticulous attention to detail and exaggerated light and color vibrancy elements, this hyper realistic, neo-surreal imagery once again caught the attention of Leonardo DiCaprio. Known to be an avid art collector, Hollywood actor already purchased the work by Roy back in 2015, and this time he added the biggest piece from this show to his collection. First introduced during Pulse fair in December 2017, Landscape with Divergent Perceptual Reference Frames is painted on linen measuring 75 x 55″ and was created as an introduction for an upcoming series.