When you are a child, not only do you not understand a lot, but you can’t make your own conclusions as people also tend to hide things from you. Parents may hide that they are struggling financially or that they are unhappy in their marriage and when you grow up, it’s hurtful to realize what was actually happening when you were younger.

A woman on Reddit came to a realization that her mom was really unhappy with her dad and regretted believing in his lies. So when her younger sister wanted to know what made her run away from home when she legally became an adult, the woman told her the truth, which shattered the image the younger girl had about her dad.

Woman is worried she shattered her younger sister’s reality by revealing the truth about their dad, but she was asked to tell the truth, so she did 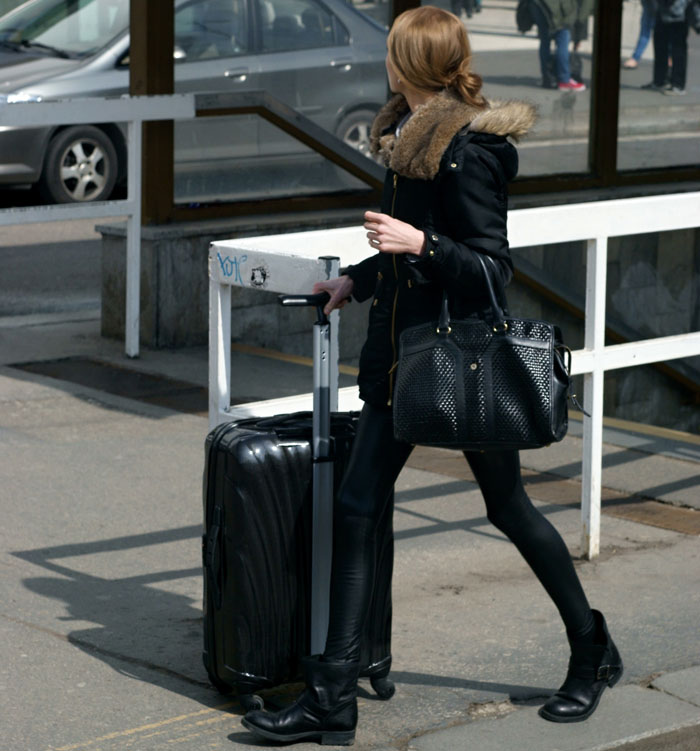 The Original Poster (OP) is now 23 years old, but her parents divorced when she was 10. What she remembers before that is her mom doing all the housework, being the strict parent and her dad saying mean things about his wife while taking on the role of the fun parent.

The dad was so convincing that the girl started to hate her mom. She didn’t understand at the time that he had told his buddy who was his wife’s boss to fire her, which left her homeless, causing her to lose custody of all three of her children, and she had to live with her sister in a different state as a result of the divorce. She just believed what her dad said and didn’t talk to her mom for years. 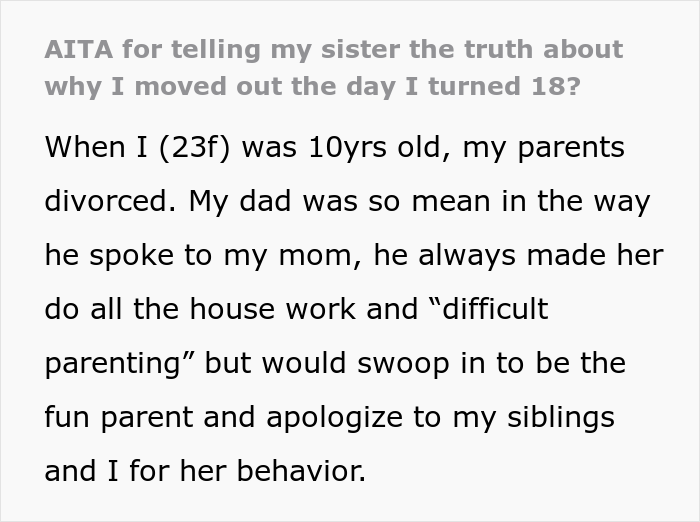 However, the realization of what actually happened came when the tables turned and the OP got all the heat that her mom was getting, feeling hated by her dad. To confirm her speculations about what happened, the OP even went through her parents’ divorce papers and decided that as soon as she legally could, she would leave the house.

Now the OP is a happy mom herself, living in her own apartment and earning her own money. She also reconnected with her mom and in the comments, revealed that the mom is doing great. After the divorce, the woman got a degree and found a good-paying job that allowed her to purchase her own home.

It also seems that the mom doesn’t blame her kids for not wanting to talk to her all these years because she understands how manipulative her ex-husband was, although the OP still feels guilty sometimes and even goes to therapy to help herself and be the best parent to her own daughter.

She didn’t know how her dad mistreated her mom and caused her to lose her job, making her homeless and sleeping in her car 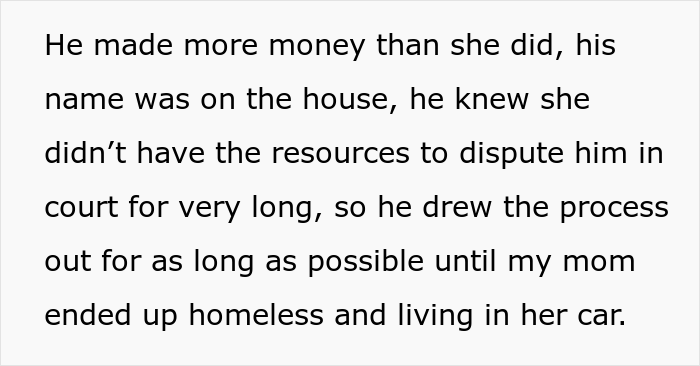 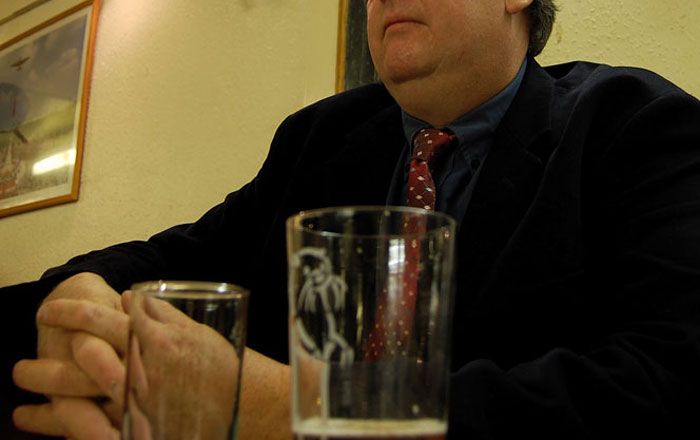 The OP’s and her mom’s lives are in order and they got out of that hole, but because she left quite abruptly, her sister had questions, so she recently reached out, wanting to talk. The little sister wanted to know the real reason the OP left and insisted on knowing the truth after sensing her older sister was not telling her everything.

The woman told her little sister everything, but isn’t convinced she believed her. The OP talked about what happened with her mom, who said that it wasn’t fair to shatter the image of the dad being a hero to her.

But when he started to mistreat her as well, she connected all the dots and started to think about how she needed to escape the house as soon as she legally could 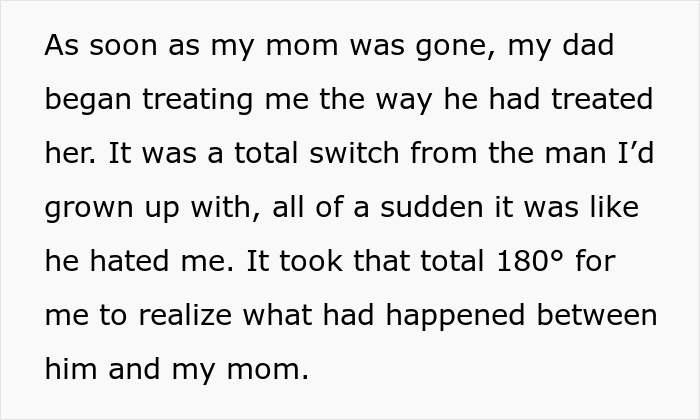 The woman also explained in the comments what her dad has been telling her younger siblings about her sudden disappearance: “From what I understand, my dad told her and my younger brother that he and I had a disagreement about something and the whole thing was just a big misunderstanding, so she wasn’t really expecting my actual answer at all.”

Just like her mom didn’t blame her children, the OP doesn’t blame her younger sister for not wanting to believe the truth, because she remembers how her dad talked and how manipulative he could be, making it look like she was the unreasonable one and he was heartbroken he couldn’t save the family.

Now the OP lives a happy life and talks with her mom, who is doing great, but she left unanswered questions, so her younger sister wanted to know why she left

Even if the little sister wasn’t too convinced in OP’s story, she probably left with some doubts in her head. Being lied to is never nice; finding out the truth years later feels like a betrayal and family secrets will surface sooner or later.

Psych Central explains that keeping secrets harms relationships and may make children feel anxious because even though they don’t know a lot about the world, they still can sense something serious is being hidden from them. They can grow resentful and never show trust in their family members.

It is also damaging because “Children learn about the world from the adults in their lives. When eventually told the truth, either by a parent, or even worse, by someone outside the family, their world may feel shattered. Secrets’ impact on children can be profound, regardless of their age.”

After some attempts to hide the truth, the older sister gave in and revealed what kind of person their dad really is, but the sister didn’t believe her

French psychiatrist Serge Tisseron says that “No truth is therapeutic, but every secret is toxic. It’s a paradox you must learn to deal with. To heal, you simply need to accept that secrets are not so much an obstacle to truth that must be uncovered as to an honest family dialogue.”

So even though the truth is traumatic and, as the mom put it, “reality shattering,” it is better to know it and try to work through it. Redditors in the comments seemed to be of the same opinion and believed the OP did nothing wrong and her little sister, who is legally an adult, had the right to know how her father really is, what happened leading up to their parents’ divorce, as well as how the dad treated their mom afterward.

When the mom found out what the OP did, she didn’t think it was the best idea as in her eyes, the sister is still a child and her dad is her hero 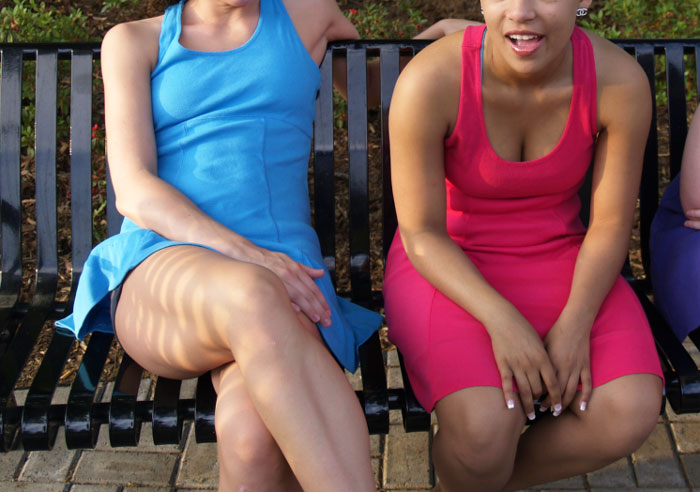 Do you think the OP should have continued lying to her sister? Do you agree that it’s better to know the heartbreaking truth and that staying in a reality based on lies is toxic? Let us know your thoughts in the comments!

But people in the comments pointed out that the sister was 18 and deserved to know the truth, especially because she wanted to 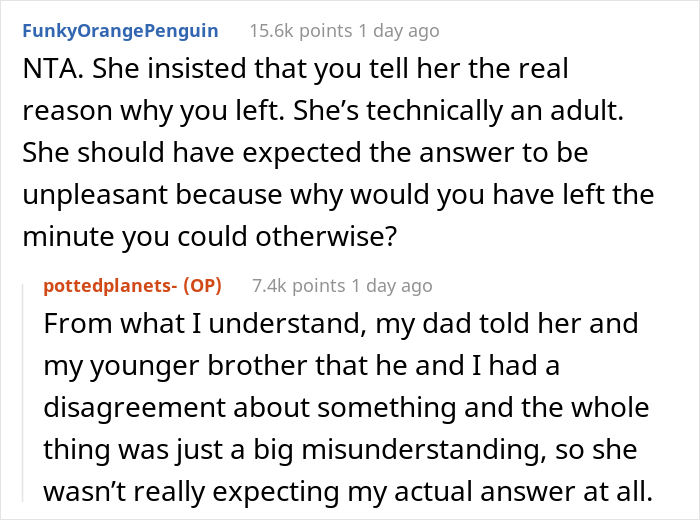 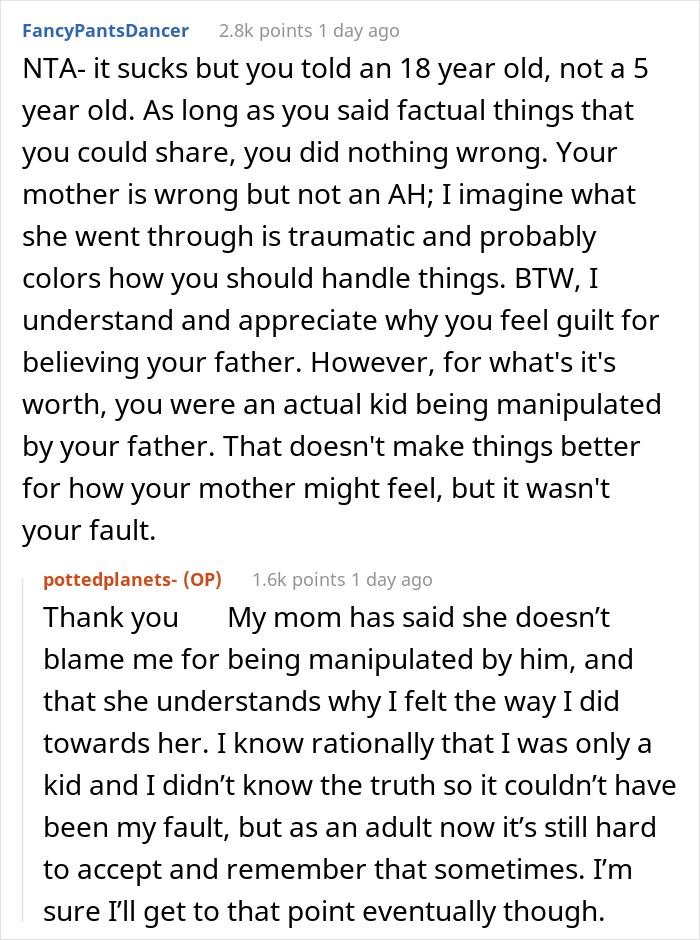 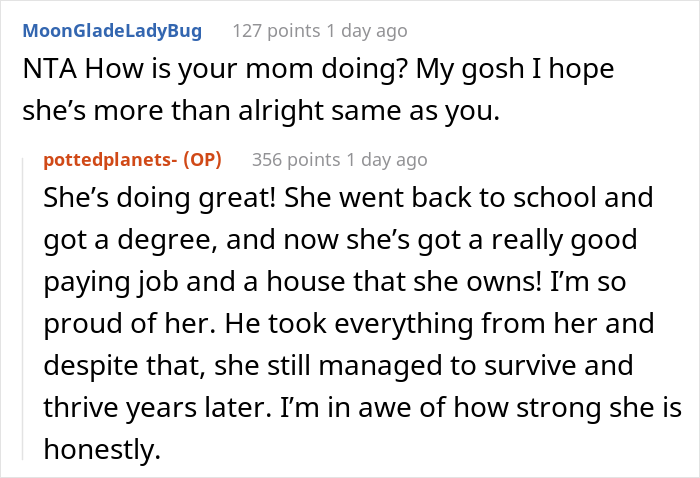 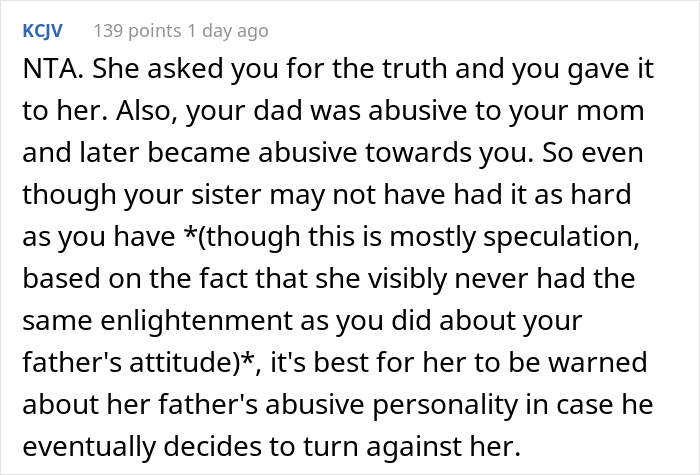 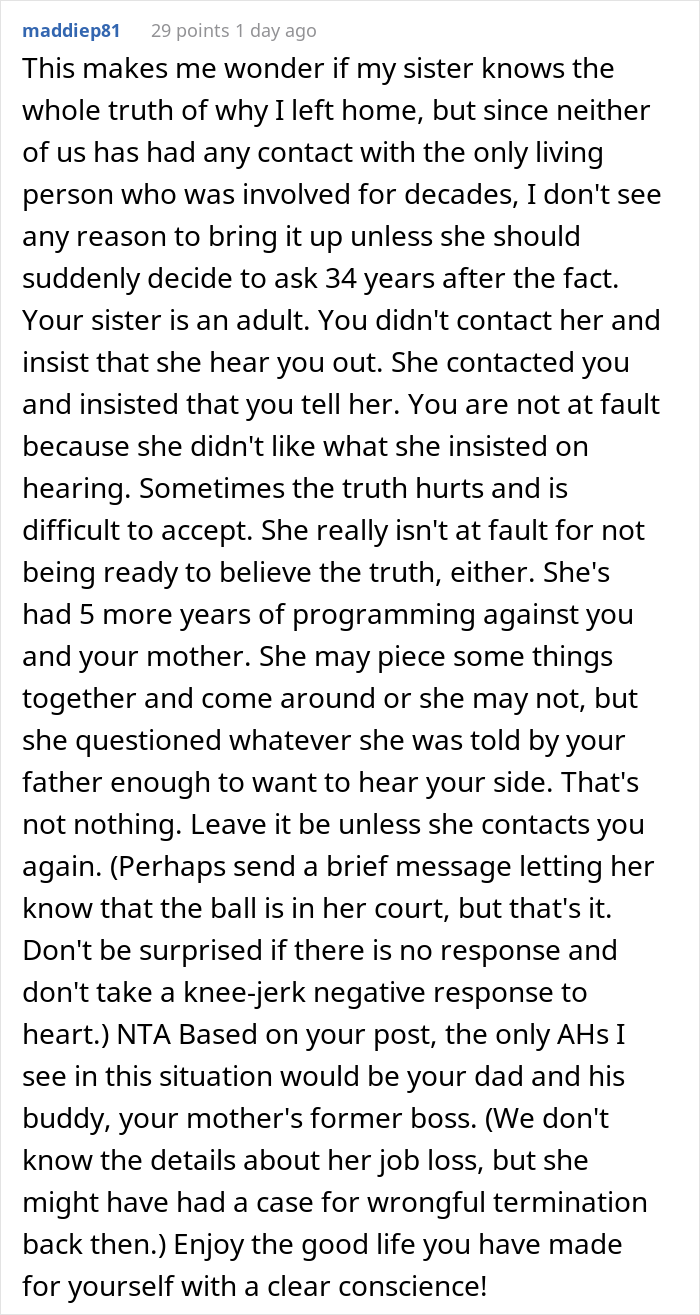 The post Sister Asks Her Older Sibling Why She Disappeared From The Family On Her 18th Birthday, Who Gets Called A Jerk After Explaining How Dad Ruined Mom’s Life first appeared on Bored Panda.