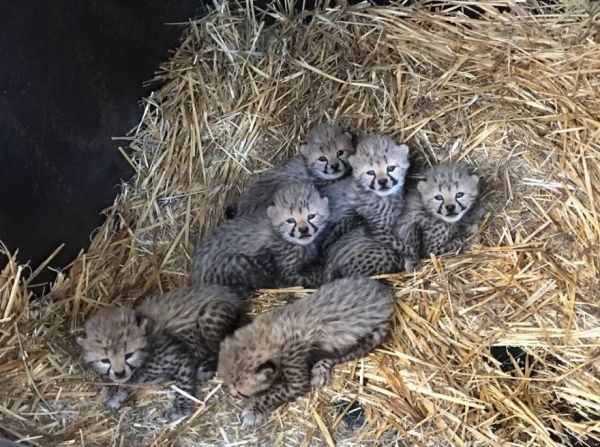 Cheetahs are notoriously hard to breed in captivity, but that only causes serious breeding programs to work harder to meet the cats’ needs. For some institutions, that work is paying off. A cheetah named Kyan at the Taronga Western Plains Zoo in Dubbo, Australia, gave birth to a litter of six cubs on June 6.

“This Kyan’s fourth litter,” said Cheetah Supervisor Jennifer Conaghan. “Kyan is showing very positive maternal behaviour. Having so many cubs at one time is her biggest challenge, but she is being a very attentive and patient mother.”

“Two to four (cubs) is the average litter size for Cheetah, so six is pretty extraordinary. This is the largest litter we’ve had at Taronga Western Plains Zoo, with 20 litters produced here to date,” said Jennifer.

Taronga’s cheetah population rose to 17 with the addition of the new cubs. They will be kept in seclusion with their mother for another two months before facing zoo visitors. See a couple of short videos of the cubs in action at Mashable.