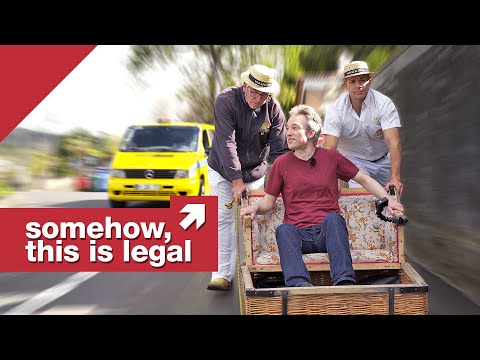 In the town of Funchal on the island of Madiera in Portugal, workers once used wooden sledges to transport lumber down the mountains to the cities and ports. Once easier cargo transport was developed, the sledges were repurposed for tourists. The hills are just as steep as they ever were, but now the sledges are fitted with wicker couches for people to ride while being pushed downhill at terrifying speeds by Carreiros do Monte. Why is it terrifying? Because you’re sliding downhill on a public road with traffic and no seatbelt. What a thrill! Tom Scott tried it out so you don’t have to. But if you want to, the Carreiros do Monte will be greasing the skids and resoling their shoes for you.

Tom sure gets around, but you have to admit he’s put in the work to get there. He’s come a long way from soaking his fingers in pineapple puree and throwing drums off a cliff.