In the 1970s, New York looked like a city in decline. The Mayor’s Office had been running a deficit since the 1960s, borrowing to balance the budget, but in the spring of 1975, the banks that had kept the city afloat declined to extend further credit, initiating a fiscal crisis. By October 16, New York was on the verge of bankruptcy, which President Gerald Ford famously refused to alleviate. The Municipal Assistance Corporation, a committee formed several months earlier to manage the city’s finances, and composed almost exclusively of bankers, pivoted to enforcing austerity. The policy was buttressed in 1978 by the establishment of the Emergency Financial Control Board, which was also concerned with finding market-based solutions to the scarcity of funds. This subtle takeover of key governmental functions by financiers resulted, in the short term, in mass layoffs of civil servants, rollbacks of social services, and the proliferation of the most potent symbol of what had come to be known as “Fear City”: abandoned tenement buildings. Set on fire by deadbeat landlords in the South Bronx and occupied as squats by artists on the Lower East Side, these structures and their neighborhoods birthed two of the most influential art scenes in the history of New York, if not the world. Artists fought governmental mismanagement as one might expect them to: by sublimating their frustrations, seizing the city’s transformation as their subject and their cause. 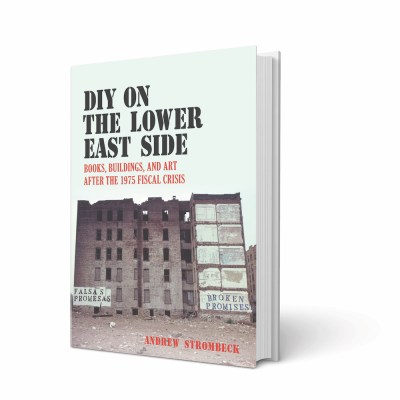 In the long term, the fiscal crisis fostered the financialization of the city’s economy, planned gentrification, and gross mishandling of the AIDS epidemic. Following historian Kim Phillips-Fein and others, Andrew Strombeck, professor of English at Wright State University, argues in DIY on the Lower East Side: Books, Buildings, and Art after the 1975 Fiscal Crisis that this economic reconfiguration of New York contributed to a broader breakdown of the “long networks of the Fordist economy.” Alan Greenspan, chair of President Ford’s Council of Economic Advisers, weaponized the crisis to advocate for “a new moral politics” that preached financial responsibility and reductions in government spending, providing an ideological blueprint for the contemporary Republican Party. Artists and writers downtown, Strombeck contends, found new ways of “doing it yourself,” by which he means much more than making homemade clothes or zines. The mandate to hustle triggered by a shrinking social safety net resulted in a primitive version of today’s gig economy, and provided a new model of the ideal laborer: “people who love their job, value creativity, and who don’t mind working unpaid overtime.” While these “culture workers,” as Strombeck prefers to call them, can be credited with the gentrification of the Lower East Side (and by implication, the rest of New York, San Francisco, the world), they also practiced a politics of community and resistance that demonstrated “the possibility for living and creating outside of the self-management demanded by post-Fordist work.”

Strombeck sees this turning point in economic, political, and cultural history reflected in the work of New Yorkers who spent the fiscal crisis making art: he devotes chapters to Gordon Matta-Clark and David Wojnarowicz; painter Martin Wong, writers Miguel Algarín, Bimbo Rivas, and other affiliates of the Nuyorican Poets Cafe, the nonprofit performance space established in Alphabet City in 1973; novelist-critics Kathy Acker, Gary Indiana, and Lynne Tillman; and the editors of the little magazines Semiotext(e) and Between C & D. The DIY ethos born of austerity and exhibited in this work represents, for Strombeck, a “utopian possibility at the moment of Fordism’s destruction,” when our present reality of Amazon, Uber, TaskRabbit, and OnlyFans might have gone another way. It is under the rubric of dot-matrix printed journals and storefront galleries, do-it-yourself tenant advocacy, afterschool programs, and banking that the arts flourished during times of trouble, in physical spaces reclaimed by artists whose formal inventions mirrored the conditions of their lives. 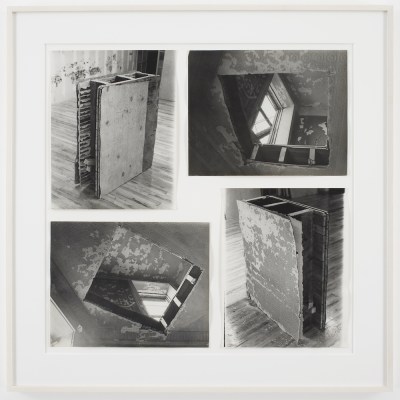 For Strombeck, the monologues collected in Wojnarowicz’s Waterfront Journals (1978–80) preserve “a narrative record of lives that appear in corners of the post-crisis city’s disused landscape, only to disappear under the underclass-scapegoating logic of redevelopment.” Wojnarowicz cruised the West Side piers in the guise of an amateur anthropologist (a role he would reprise with more zealous political intent amid the AIDS crisis and the culture wars) while Matta-Clark made art out of disused buildings in the Bronx, illegally cutting holes that celebrated their inherent value. The theoretical reappraisal of these buildings into objets d’art because of his excisions parodied real estate’s exploitation of neighborhoods for profit, which Strombeck reads as antithetical to the artist’s leftist stance, a signpost “toward private-public models of development that would assume more and more primacy in the aftermath of the financial crisis,” and culminate in the High Line.

But Chelsea is not the Lower East Side, nor is the Bronx, or even SoHo, and Strombeck’s specious geography suggests the inexactitude of an outsider. Matta-Clark did not live or work on the Lower East Side, and though the legacy of Semiotext(e) has merged with the myth of downtown because of the writers it has published, the journal was founded uptown, on the campus of Columbia University. Strombeck is quick to indict dilettantish attempts to explain New York to New Yorkers when they appear, for instance, in the work of French philosopher Félix Guattari, who presented an insensitive paper on “blacks in Harlem” to the audience at the Semiotext(e) “Schizo-Culture” conference at Columbia in November 1975, sharing a bill with Michel Foucault, Gilles Deleuze, William Burroughs, and John Cage. As Strombeck himself notes, the innovations of Black culture in Harlem and the Bronx at this time were far from insignificant, and the imprecision of his purview makes their absence here conspicuous. DIY on the Lower East Side does not purport to be a comprehensive history, but its case studies offer variations on a theme rather than a coherent thesis about the Lower East Side, assigning ’70s New York’s most radical energies to the neighborhood by association.

The book’s argument hinges on “the indelible mark” left by the fiscal crisis on art and writing of the period, “shaping the ways” its authors “thought about modes of living, working, and making art.” Some of them (Wojnarowicz, the Nuyorican poets) were prolific activists, but Strombeck praises Between C & D’s editors Joel Rose and Catherine Texier especially for “documenting downtown instead of curating it,” functioning as “archaeologists” rather than trying (and inevitably failing) to “represent” the Lower East Side. Strombeck’s terminological distinction (and occasional slippage) implies a conflict between the documentary and representational modes that his methods, steeped in French sociology, “surface reading,” and “post-critique,” fail to unpack. The book’s attention to Indiana and Tillman is welcome, as they deserve more appreciation in the field of literary studies than they have received, but the analysis is not always as insightful as Strombeck supposes it to be. His explications are often too cursory or allusive, as in a passing evaluation of an Indiana story as “typically queer,” or the insistence that Tillman’s “Madame Realism” columns, many of them originally written for this magazine, “anticipate” the critical practice of philosopher Jacques Rancière. One would hope to find more life in a work of ostensibly biographical criticism than Strombeck seems willing to supply: what of the artists’ friendships, rivalries, and affairs—or rare finds such as an early short story by Anthony Bourdain in Between C & D, which is referenced without comment?

One reason for this may be the sheer ambition of Strombeck’s project, which traverses disciplinary boundaries in search of a conception of DIY that is political as well as aesthetic: though “DIY is absorbed into late capitalism itself,” he writes, “we can nevertheless see in DIY a desire for ways of living outside of the boundaries of work.” The inclusion of Acker, already the subject of voluminous scholarship, feels perfunctory, and it’s not exactly clear why the art criticism of Tillman and Indiana—commissioned, edited, and paid for by legacy publications—belongs in this genealogy. But Strombeck’s research on Between C & D, the Nuyorican Poets Cafe, and El Bohío, a disused public school building converted into a theater and arts center by the community organization Charas, supplies a corrective to more cynical accounts of the counterculture post-1975, elaborating an ethos that “meant taking into your own hands what the government has stopped providing,” one that was “well-meaning and complicit, activist and entrepreneurial.”

It is not exactly reassuring to learn that the pioneers of gentrification were no less ambivalent about disadvantaging others for mere subsistence than the current class of ostensibly progressive urbanists for whom real estate colonialism is the norm. Yet the archive is rich in what could have been, pre-Starbucks and Giuliani. Neoliberalism has not yet succeeded in killing New York for good, but in times of crisis, communities cannot live on mutual aid alone, and it will take much more than a DIY attitude to ensure a future for the people, the buildings, and the art that call the city home.

While in Lockdown, Musician David Byrne Took Up Drawing to Help Fight Fatigue