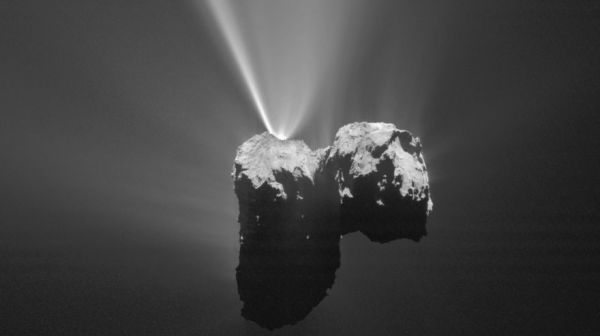 We followed the adventures of the Rosetta spacecraft as it approached and sent the Philae Lander onto the surface of comet 67/P Churyumov-Gerasimenko. The European Space Agency (ESA) is just now releasing substantial data gathered during the expedition. And it’s awesome. Twitter user landru79 combined that data into a gif, which Phil Plait converted to a video. 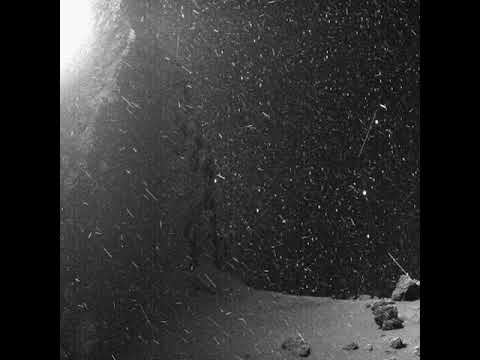 Plait explains what we are seeing.

The landscape itself is the comet. Comets are lumps of ice — things like frozen water, carbon dioxide, and ammonia — and rock, mostly in the form of gravel and dust. Some orbit the Sun on long ellipses, and when they get close in the ice turns into a gas, releasing ice flakes and the gravelly bits. This surrounds the solid nucleus with a gaseous/dusty coma, and that can then blow away from the comet due to the solar wind and pressure of sunlight to form the tail.

67P is a double-lobed comet, looking more like a rubber ducky than anything else. It’s very roughly 4 or 5 km across, and takes about 6.4 years to circle the Sun once. Rosetta was about 13 kilometers from the comet as it took these images, slowly moving around it so that our vantage point in the video changes slightly. Comets are very dark, and it was three times farther from the Sun than Earth is when these images were taken, so the lighting is fainter. Also, these were on the “dark side” of the comet, so the illumination you see is from reflected sunlight by the coma. The video represents about a half hour of real time.

Phil has plenty more to tell us about the data from 67/P Churyumov-Gerasimenko at Bad Astronomy.