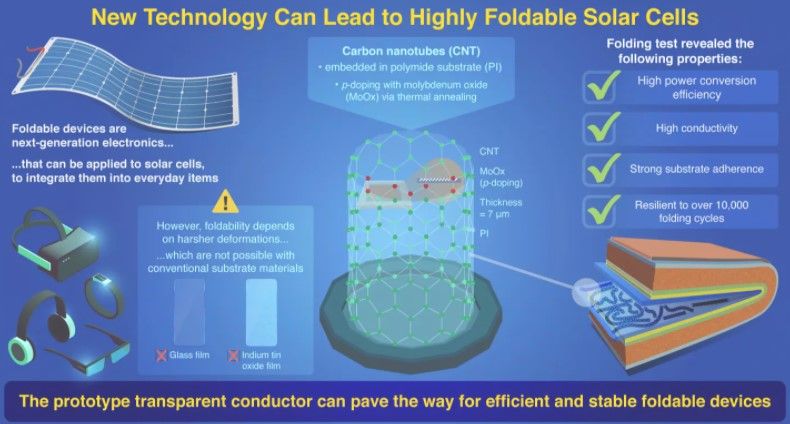 The greatest issue when it comes to solar cells is flexibility. While they are great power sources, they are not flexible enough to be integrated into vehicles, phones, indoor devices, and clothing.

For years, scientists have been trying to address this issue and were able to create solar cells that can bend but only at a limited degree.

It seems that their efforts have finally paid off. Recently, engineers at Pusan National University in Korea were able to create prototype solar cells that are fully foldable. Their research is published in the journal Advanced Science.

“Unlike merely flexible electronics, foldable devices are subject to much harsher deformations, with folding radii as small as 0.5 mm,” says Professor Il Jeon, corresponding author of the study. “This is not possible with conventional ultra-thin glass substrates and metal oxide transparent conductors, which can be made flexible but never fully foldable.”

To address that concern, the researchers turned to conductive films made of single-walled carbon nanotubes (SWNTs). They embedded this film onto a polyimide substrate, then doped it with molybdenum oxide to improve its conductivity.

In the end, the researchers were able to make a solar cell just seven micrometers thick that could fold to a radius of just 0.5 mm. They were able to withstand over 10,000 folding cycles without breaking. They of course also functioned decently well as solar cells too, exhibiting a power conversion efficiency of 15.2 percent and 80 percent transparency.

“The obtained results are some of the best among those reported thus far for flexible solar cells, both in terms efficiency and mechanical stability,” says Jeon.

This is a breakthrough!