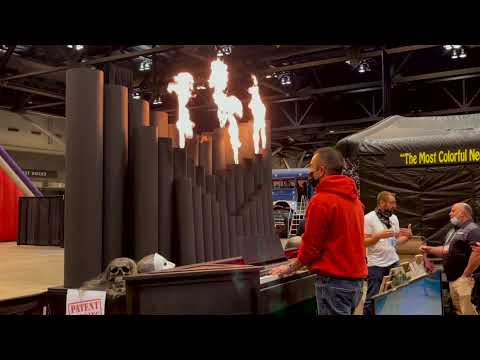 We’ve often heard people describe good music as “lit”. But when it comes to being lit, Bach’s music would be the first one to achieve that… literally speaking, at least.

Someone has built an organ that shoots out actual flames – and this guy has played some Bach on it.

This incredible instrument was found at the Transworld Halloween and Attractions Show, which took place a few weeks ago in St. Louis, Missouri.

It’s played by Tom BetGeorge, a Californian music teacher and YouTuber who goes viral every Christmas with his house light displays to Beethoven, John Williams and more. So he knows a thing or two about syncing music and blazing visuals.

Flame-throwing organs aren’t new, however. People have been trying to make this type of instrument as far back as 1777. So I guess Bach’s music isn’t the first one to achieve “lit” status.